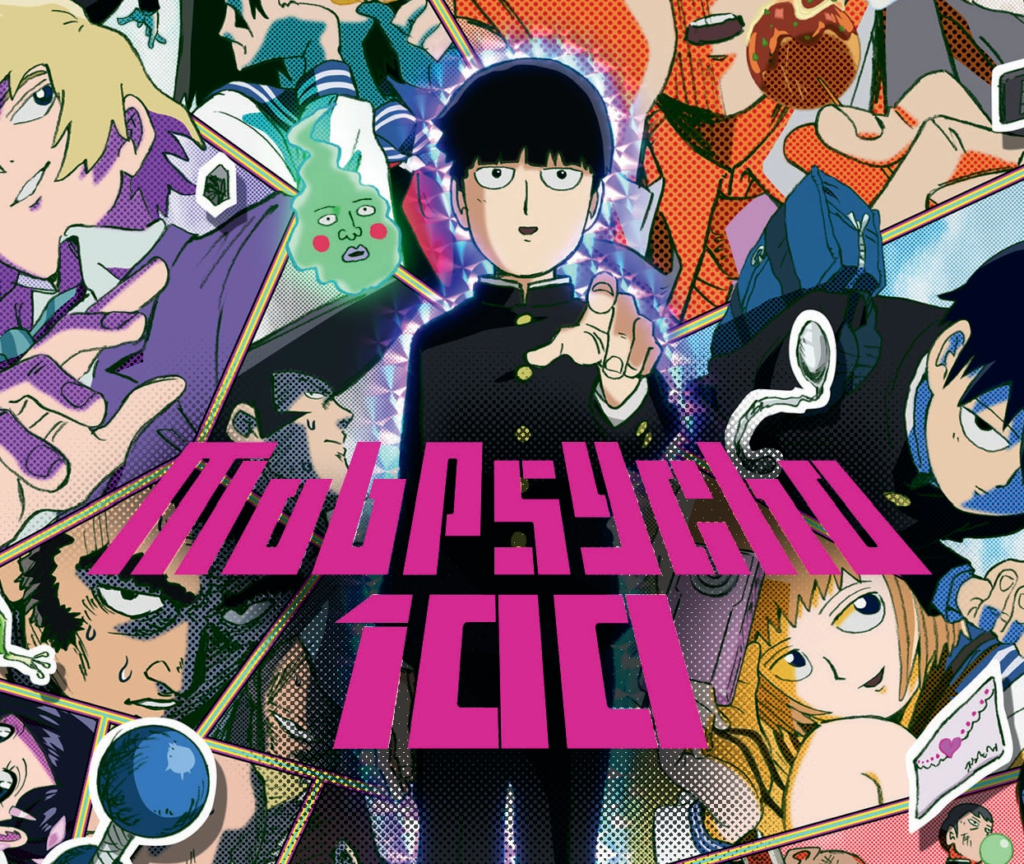 Mob Psycho 100 follows 14-year-old Shigeo Kageyama, or “Mob” (an alternative pronunciation of the kanji in his first name) for short, a boy bestowed with powerful psychic abilities that he chooses to use for good and never for personal gain, under the supervision of shifty “used car salesman” psychic for hire Reigen Arataka, who actually does not have any psychic power at all, and is in fact partially exploiting Mob for his own gain.

Together they provide services for the Spirits and Such Consultation Office, though Mob of course does the actual exorcisms of spirits, while Reigen allows him to think he’s simply letting Mob take care of the small fry.

Mob Psycho 100 is a bit of a different take on the born-special narrative in that the main character with said amazing psychic abilities is actually pretty nonchalant toward his supernatural powers. He’s much more focused on regular things for a boy his age – talking to girls, fitting in, making friends, and keeping a tight control on his emotions so he doesn’t destroy anything with his awe-inspiring powers.

Since learning the hard way at a young age that his powers are very tied to his emotions, he has tight control over his emotional expression, which prevents him from harming other people once he reaches 100 percent, as the series name suggests.

But this stringent control over his expression causes difficulties for him as a highschooler, making him stiff and awkward with others, as well as a little overly compliant.

It is the conflict between what others want from him and want him to do that drives the rest of the story and character development.

From Web Manga to Acclaimed Anime

At first glance, you might notice the art bears a resemblance to another popular anime, One Punch Man. Both are created by ONE and got their start as webcomics, but thematically, Mob Psycho 100 has a bit more depth to offer than the series about the overpowered man.

While they share themes of being disillusioned with great power, Mob Psycho 100 focuses more on the relationships around the main character than its looming threats and loads of characters (but don’t worry, there’s plenty of those, too.) It’s very much a coming-of-age story, not just for the main character, Mob, but those around him as well.

Mob is able to extend the compassion he’s shown by others to completely transform their lives and help them accept themselves just a little more.

Mob Psycho 100 was originally published in April 2012 on Shogakukan’s Ura Sunday website. It was adapted to animation in July 2016 by Studio Bones, known for its sleek, action-packed animation style that helps bring the battles and depiction of psychic powers to life. Some of these fights you can just really feel. Season 1 ran from July to September 2016, and Season 2 was simulcast in the US from January 7th, 2019 to April 1st, 2019.

At the start of season 1, Mob is something of a weak shrinking violet – unobtrusive, not especially athletic, and doesn’t strive for academic achievement. If anything, he desires nothing more than to have friends and close associations, something his awkwardness and reticence has kept away from him.

This conflict is neatly exemplified early on, when Mob, confronted by his lack of real interest or ambitions and compliance, seeks a club to join. At first it seems like he’ll join the Telepathy Club, a club that desperately needs one member to stay instituted, which just ends up having to share a room with the Body Improvement Club, which Mob joins instead.

It is here that Mob seems to be able to kill three birds with one stone, accept his psychic abilities, become stronger, and form close associations with people his own age and learn how to accept himself.

The theme of not identifying so strongly with one’s natural gifts and strengths and emphasis on how they treat other people is brought to life in the form of Teruki Hanazawa, a foil for Mob with a big ego and even bigger hair, insisting Mob fight him even as Mob refuses, to the point where he actually drives Mob to 100, the point at which he loses all conscious control of his powers and lets them loose.

While he eventually gains an ally in Teruki, as well as in a cult master turned impish spirit named Dimple, there is no shortage of people in entities out for Mobs powers or people like him.

He even has some hidden enemies within his own family, his older brother Ritsu, while talented academically and popular in his own way, seemingly having all the things Mob does not, and being admired and cared for very much by Mob, conceals seething resentment and fear of his older brother, due to an incident in their childhood which resulted in Ritsu being hurt.

Of course, in season 2 it’s revealed that it was this very incident that drove Mob to seek Reigen out for help to control his powers in the first place.

Beyond the walls of Seasoning City, a dark shadow agency Claw is targeting children like Mob with psychic abilities in order to exploit their powers for greater gain. It consists of people who have been in captivity by Claw for many years, some of them well into their mid-30s and beyond, and have been so sheltered from the world that Reigen is able to breezily walk in pretending as if he’s in charge and they naturally follow him until it’s revealed he’s not.

As scummily likable as Reigen can be, one thing that makes him consistently heartwarming is his repeated admonition to Mob that what is inside is important, not so much his psychic abilities, and he has no problem turning that attitude on the psychic captives that have grown so attached to their powers and fused it with their ego in captivity.

He basically tells them to grow up and join society, which is a bit hypocritical on his part, since it’s revealed he has issues with wanting to be special himself later on in the series.

The relationship between Reigen and Mob is central to the plot and develops over the course of the seasons from a pretty exploitative if somewhat well-meaning relationship to one in which Mob can stand in his personal power, developing more personal confidence and social dexterity that he begins to enforce his independence and not be so much at Reigen’s beck and call.

In season 2 of Mob Psycho 100 (also known as Mob Psycho 100 II), Reigen, however, is initially unable or unwilling to accept this and continues to treat Mob like a lackey until Mob finally puts his foot down and realizes that Reigen might not have all the answers after all. While Mob distances himself and becomes closer to his friends, this distance throws the realization that Reigen has next to none into sharp relief.

Initially, he tries to play off his short-handedness (and loneliness) and continue on developing his business, but one day it backfires when he in his hubris, goes on a television show to compete with other psychics, some of them real, to exorcise a boy, but is unable to exorcise the spirit at all. Not only because he doesn’t have psychic powers, but the boy was revealed to be an actor only pretending to be possessed.

Finding himself all alone with his back up against the wall, he holds a press conference to try to smooth the damage over. It’s during this grueling self-torture that he realizes that he’s always wanted to be the very thing he’s preached against from the beginning – special.

Mob bails him out in the end, causing a psychic earthquake event in the studio and clearing Reigen’s reputation. He later meets up with Mob, and asks if he knows what Reigen truly is. Mob, of course, knows the answer: Reigen is a good person.

It’s unclear at this point whether or not Mob knows Reigen is a fraud, but that he’s internalized the message Reigen tried to impart on him all this time in combination with Mob’s forgiveness makes him proud.

As with season 1, many interlopers continue to come after Mob as he and Reigen exorcise many ghosts, demons, and other spooky legends, but Claw is done with them yet, and looms ever closer as we near the end of the season.

Where to Watch Mob Psycho 100, Sequels, Spin-offs and More

Mob Psycho 100, its sequel season, Mob Psycho 100 II, and a special OVA are available for streaming in full on Crunchyroll and Funimation.

If you’re interested in seeing how Mob Psycho 100 operates in the real world, there’s a live-action drama adaptation that’s available to watch with subtitles on Netflix.

Due to the character’s popularity, Reigen also has his own spin-off manga, Reigen: The Man With a MAX Spirituality Level of 131.

Three New ‘Mob Psycho 100’ Projects Are in the Works