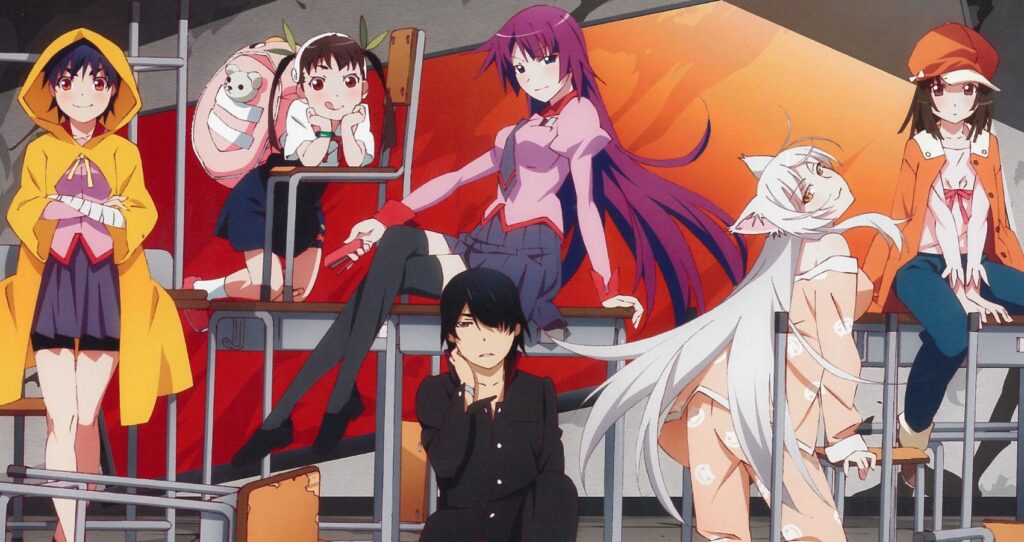 Ardent light-novelist NisiOisin. Directorial and visual magician Akiyuki Shinbo. The risk-taking Studio Shaft. When these three forces do their fusion dance, forces that have repeatedly revolutionized their respective fields, audiences win every time. They’re set to do it again with April’s Pretty Boy Detective Club, which we hope to be a Monogatari equivalent for the world’s Guy Likers.

While we wouldn’t say the latter’s intentions are entirely altruistic, it actually does more than just parade around a bunch of stylish ladies. As much as that sells, Bakemonogatari wouldn’t have become a phenomenon with regular new installments for over a decade if it only existed to sell anime figures. It earnestly manifests different variations of love, in ways the thousands of other anime that are selling wish-fulfillment romance fantasy could never replicate. With each girl, every pairing is kind of canon.

Hitagi Senjougahara and the Love Circulation of ‘Attraction’

Starting with Monogatari’s leading woman (though probably not the one who gets the most air-time), hapless Koyomi Araragi defied fate and got the ice-cold Hitagi Senjougahara to fall for his nebulous ass at the very beginning of the series.

While their relationship couldn’t be called ‘normal’ in practice, the two together do embody the most common form of love, based on romantic attraction. In short, these two crazy kids dig each other and are canonically dating, despite Araragi’s many unintentional and intentional flirtations with the other Monogatari figure advertisements.

They’re ‘canonically’ a couple, and an extremely closed reading of the series would tell you that’s that, but you could also read their almost pre-mature love story as the series wanting to get its most conventional tale out of the way.

Tsubasa Hanekawa and the Love Circulation of ‘Respect’

In the first season of the Monogatari stories, Koyomi Araragi’s love for Tsubasa Hanekawa matters more symbolic than his for Senjougahara. Though maybe this feels more apparent in the light novels as Kizumonogatari (second in the series, first canonically) didn’t make its way to the anime watchers until 7 years after Bakemonogatari.

Being his first ever high-school friend and a constant source of both inspiration and information, he downright views the saintly high-schooler as his savior, putting her on a higher pedestal than just about anywhere else in the series.

According to canon, his feelings for her aren’t ‘romantic’ in the Shojo sense, and (spoilers) Putting canon aside, one could argue he still loves Hanekawa more than anyone, with his lack of self-respect preventing him from viewing himself viable for her romantic love.

Shinobu Oshino and the Love Circulation of ‘Dependence’

As special as finding your soulmate can be, and as sacred one would view the person who saved their life, Koyomi Araragi has forged one relationship in Monogatari even more intimate: His co-dependence with Kissshot Acerolaorion Heartunderblade, more commonly called Shinobu Oshino.

After the events of Kizumonogatari, the two embark on a relationship where they’re literally physically dependent on one another to live. Always together, except for moments where the guiding hand of the plot alone separates the two, Shinobu and Arararagi have come to trust each other more than anyone else.

She’s always in his shadow, and he’s pledged to die with her. Even if ‘smooching’ isn’t a part of their relationship, you couldn’t call this dynamic anything but love.

Mayoi Hachikuji and the Love Circulation of ‘Friendship’

Because of Mayoi Hachikuji’s age, we want to make clear we’re not saying she and Araragi are specifically romantically involved, so much as their dynamic coming from a facet common in all kinds of relationships: Friendship.

Araragi and Hachikuji bicker, banter, and chide. Their natural mode of showing affection for one another manifests as an almost unconsciousness need to one-up each other in witticisms and jokery. The lost snail sees our semi-vampiric protagonist at his most silly, his most carefree, and with the biggest smile on his face. Araragi even plainly states that out of his entire fighting game character select screen’s worth of occasional companions, he enjoys Hachikuji’s company the most.

Just look at how far he goes for her time and time again, consequences be damned.

Nadeko Sengoku and the Love Circulation of ‘Concern’

Out of the entire Monogatari girl charcuterie, Nadeko crush-based affections for Araragi seem the most one-sided. That doesn’t mean young Koyomi doesn’t consider the snake girl a beloved friend, almost too precious despite how her story turns out.

Originally introduced to her as a friend of his sisters, those sister affections from Araragi are also extended to Nadeko throughout the course of the series’ first and second overarching storylines. His big-brotherly concern, while well-meaning, in typical NisiOisin convoluted fashion, gets twisted here and there, which does a good job of highlighting what happens when two people’s love for each other takes on different forms.

Only, in real life, nobody ends up becoming a Snake Goddess.

Kanbaru Suruga and the Love Circulation of ‘Comradery’

Arguably none other than Kanbaru Suruga finds themselves in the most similar position to Koyomi Araragi. Both experience romantic feelings for Senjyougahara, both of them are huge perverts, and the two stopped being ‘exactly human’ while not becoming full apparition.

Kanbaru doesn’t throw herself into danger quite as much as Araragi, but that’s because of opportunity. She could, and does, whenever she gets the chance. By the end of the third series of stories, Araragi trusts hers enough to leave his girlfriend’s life in her hands.

The two enjoy a bond based on certain degrees of extreme similarity, leading to a mutual understanding, similar to what Araragi has with Shinobu, but without the necessity of dependency.

EXTREME SPOILERS AHEAD FOR OUR LAST ENTRY YOU HAVE BEEN WARNED!!!!!

Ougi Oshino and the Love Circulation of ‘Hate’

Koyomi Araragi doesn’t hate Ougi Oshino, and Ougi doesn’t hate him either, exactly. Being a literal manifestation of all of Araragi’s doubts, criticisms, and failures, she embodies what he believes to be his own worst qualities. In other words, we’re talking about self-hate.

However, Koyomi Araragi couldn’t end up hating anybody besides Koyomi Araragi, and thus accepts Ougi for all the good and bad they are. In doing so, he discovers self-love in the process.

As the old adage says, love and hate are two sides of the same coin, with a razor-thin line between the two. Most people struggle with finding self-love in all their self-hate, but having the unique opportunity to save an apparation comprising all his faults gives him the ability to embrace, and in turn, love, what he hates.

Tabitabi Demonstration: The Boys Are Back in Town