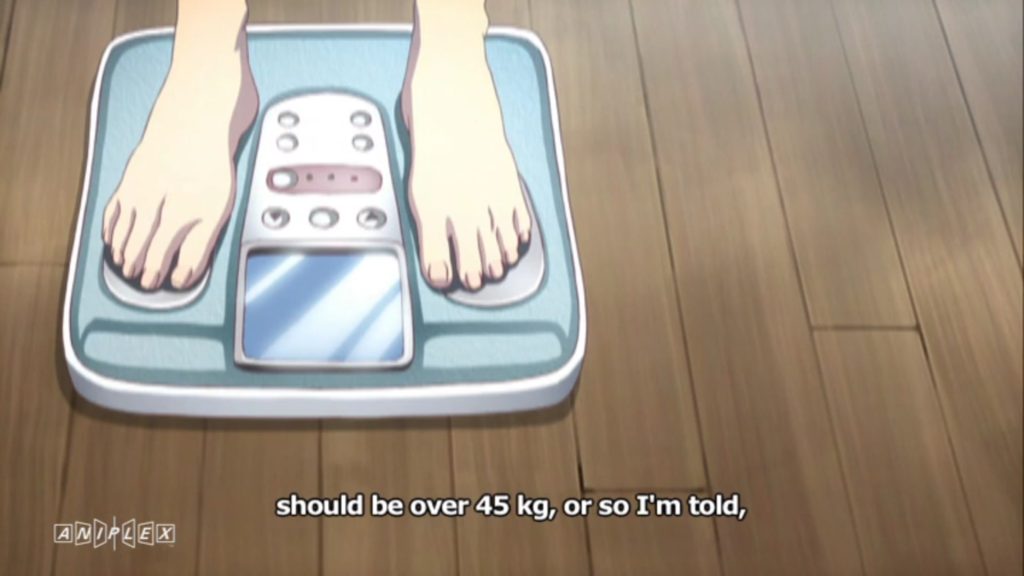 The Monogatari series has never been one to shy away from collaborations, but this latest one takes the biscuit. And I mean that literally – if you’ve eaten too many biscuits recently, then this latest collaboration will certainly have something to say about it. This is because the series has teamed up with health company Tanita for a new pair of Monogatari-themed weighing scales, complete with programmed ‘comments’ from three of the series’ main characters.

To be fair, this collaboration hasn’t come entirely out of leftfield. As Tanita points out on the product page for the Monogatari weighing scales, Senjougahara actually used a pair of these scales all the way back in Bakemonogatari to verify that she had become weightless.

Tanita has attempted to theme the scales around this fact, meaning that the scales have a design themed around Senjougahara’s iconic arsenal of stationary.

Yet these new Monogatari weighing scales are not Senjougahara’s alone however, as Tanita has programmed the scales with voices lines from three characters to “support” users and “make comments regarding the results.” These characters are protagonist Koyomi Araragi, Hitagi Senjougahara, and Oshino Shinobu. When I first heard about this collaboration, I wasn’t sure how I’d feel about Senjougahara and Shinobu commenting on my weight in particular given their personalities. But, thankfully, the comments are fairly polite. You can check out the voice lines via the Monogatari scales’ official product page.

It seems that Tanita is hoping that the Monogatari series and its characters will motivate users to pay more attention to their weight, which fits with the company’s ethos of promoting healthy lifestyles. The company is even running a competition via Twitter to give those who lose 5kg or more a chance to win exclusive prizes.

The Monogatari weighing scales are available for preorder now via Movic, with a predicted release date of early August.