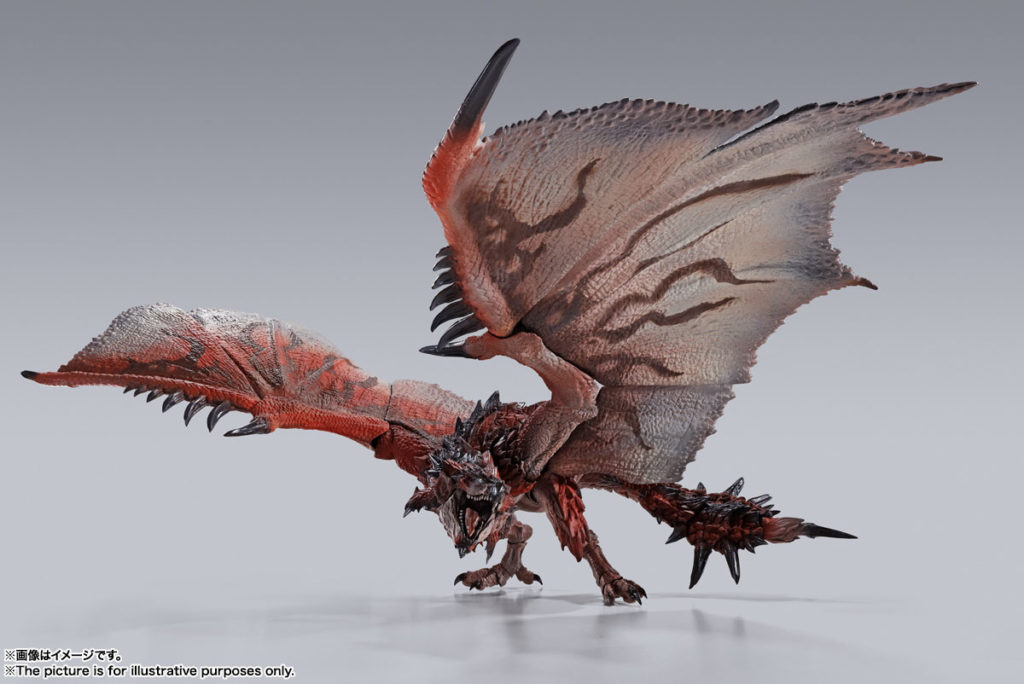 The SH MonsterArts series of figures has produced some rather impressive figures based on series such as Godzilla over the years, it may be surprising to hear that the Monster Hunter series has yet to receive any figures as part of the lineup. The series is almost ready-built for it, with all the incredibly-designed monsters which have appeared in the series since its debut in 2004. That’s set to change, with details released on two MonsterArts figures based on two of the most iconic monsters in the series set for release towards the end of this year.

The first of these figures is based on the Rathalos, first introduced in the very first game in the series and has since appeared in every Monster Hunter game since. It’s a representative for the entire franchise, you could say. This is a detailed scale monster figure overseen by series director Kaname Fujioka with a variety of optional accessories to bring this fully-posable figure to life. Interchangeable wing parts allow you to pose the Rathalos in either open- of closed-wing proses, while a stand allows you to pose the figure as though it’s flying.

The Nargacuga is another popular monster in the franchise first introduced in Monster Hunter Freedom Unite which will also receive a SH MonsterArts figure. This figure is also overseen by Fujioka, and features a stand evocative of the wild you would fight the monster in and the parts necessary to replicate a severed tail. This figure will even include a miniature hunter figure to replicate the scene in first editions of the figure only.

These figures look like great additions to the collection of any hardcore Monster Hunter fan, although the proposition and detail makes them tempting offers for even the more casual observers of the series.

Both SH MonsterArts Monster Hunter figures are now available to pre-order as of today, with the Nargacuga figure releasing in September and the Rathalos available in October.