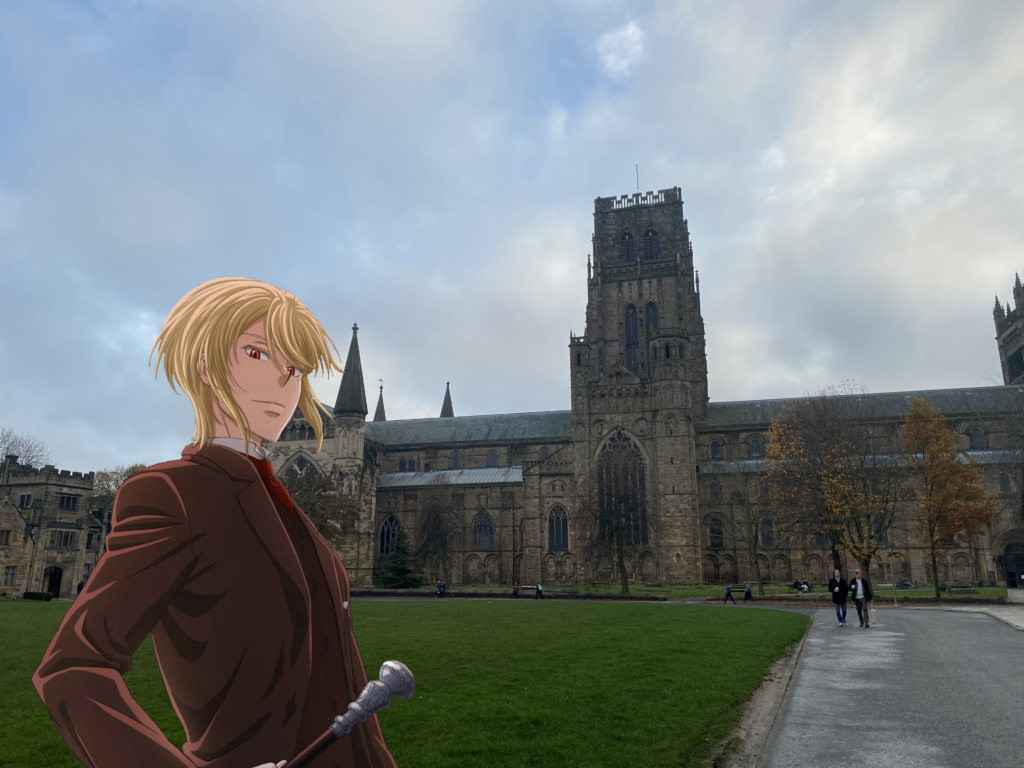 The Real-Life City of Durham in Moriarty the Patriot

Moriarty the Patriot has been one of the more engaging anime of the fall 2020 season for me. Adapted from the manga of the same name, this story employs a new twist on the well-worn story of Sherlock Holmes by centering the narrative on the noble quest of William James Moriarty as he seeks to inflict justice on the ruling classes as a ‘crime consultant’. In his role, he seeks to combat the unchecked greed and corruption of the English noble classes, weaponizing this hubris to allow the exploited class to inflict revenge and delivering them the justice they crave.

All told with a great sense of mystery and tension.

The series has grown from strength to strength since its opening episode premiered at the beginning of last month, but that’s not what I want to focus on here today. You see, just as he did in the original stories by Sir Arthur Conan Doyle, Moriarty is a professor at Durham University, and a number of recent Moriarty the Patriot episodes have shifted the narrative away from the dreary, smog-ridden streets of London to the northern city of Durham. But how does it compare to the real thing, over 120 years on from the late-19th century setting?

It’s closer than you think.

Now, before I get going here, I want to put a few safety notices at the beginning of this article. We are still in a pandemic, and in fact, England is currently subject to a national lockdown. Exercise in the local area is encouraged, and with Durham being a city not too far away for me, I could visit. All necessary safety precautions were taken while working on this article, including wearing a mask. Please wear a mask and stay safe.

Comparing the Past to Today

Often, trying to compare media set in the past to the modern-day, real-life location can feel like an exercise in futility. Places like towns and cities change over time as new buildings are erected and others are demolished, causing them to look almost unrecognizable over time. Durham City is a unique case, in that regard, due to its adherence to the past and the traditional look. Many of the cobbled, hilled streets remain unchanged by design, and many landmarks like Durham University, Durham Cathedral and Durham Castle are still standing.

After arriving at Durham train station at the end of episode 3 of Moriarty the Patriot, episodes 4 and 5 are entirely set in the city of Durham. What better place to start our comparisons to the anime than the train station, then?

Ironically, this is the only named location to have undergone significant changes since the period this series is set. Still, there are places where the resemblance is obvious. Durham Station has expanded to accommodate a much larger passenger count due to the growing population over the years, and much of the station is far more modern, with glass barriers and electronic clocks.

When we first see Moriarty arrive at Durham Station, the main station building looks more like a house than a modern station. Still, this is reminiscent of the station buildings that were present at each of the old stations that used to serve Durham at the time the series was set (such as, for example, the old Trimdon Station). Only one survives today, which appears to be the one which Moriarty reaches Durham using. This building, though remodeled internally, still survives today!

Whether the rest of the station is modeled on this is questionable, due to the surrounding scenery. This station is on the top of a hill, and to continue the tracks would take the train over a large viaduct bridge, which doesn’t appear to align with what is shown here. Still, the overhanging view of the city of Durham does exist from this station as well… even if nowadays it’s mostly invisible behind overgrown trees.

A City Trapped in Time, An Anime Accurate to the City

As for Durham City itself, much of this remains remarkably similar to how it looked in the late-1800s and Moriarty the Patriot. Now, many of the pubs and local shops no longer exist, and even if they did, they likely wouldn’t use their real names to refer to them. In saying that, you can pinpoint the approximate location of many of these settings based on their surroundings. 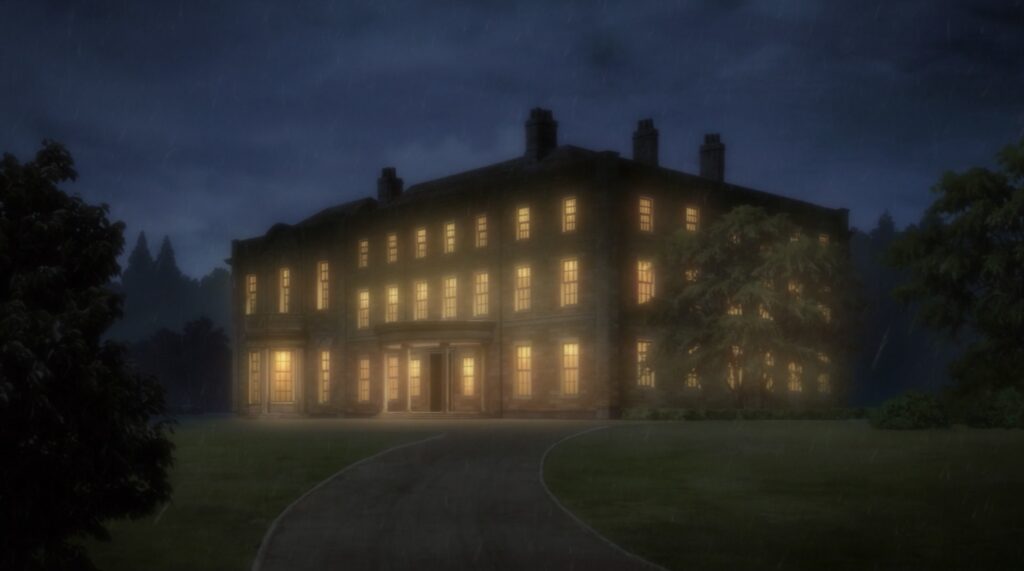 Most of episode 4 sets itself in a Durham stately home. Since this would be impossible to pinpoint and is likely based on the stereotypical vision of a British stately home, alongside the fact I’m not a person particularly attracted to the idea of taking detailed photographs of someone else’s home, I’m inclined to ignore this. Episode 5 spends a lot more time in the city and university itself, so I’m going to spend most of my comparisons here.

In Moriarty the Patriot, Moriarty is teaching a class at Durham University when he notices one of the students in his class, Lucian, has been absent for a few days. He calls upon the class if they know his whereabouts and his friend tells the class that he’s ill, while Dudley, an administrator at the university, implores him to drop the situation. He chooses to check on the student regardless and finds out they’ve been missing for a few days since learning of the death of a commoner waitress he was dating, named Frida. Moriarty decides to investigate the circumstances surrounding her death and Lucian’s disappearance further.

Let’s run through the events of this episode in order and compare the real-life locations of Durham to Moriarty the Patriot. Much of the university resides in the city itself in residential or old buildings that stand alongside shops and homes, with this lecture hall appearing to reside within Durham Castle, which is also used as accommodation for students to this day.

Moriarty the Patriot comments on the university’s status as a home to the elites outside of Oxford and Cambridge, which is still true to a certain extent today even as the university has expanded and opened further. Durham Castle can still be used as accommodation for university students attached to University College, but high costs limit the people that can reside in these halls. As of now, I was limited to only photos from the exterior due to the ongoing pandemic closing the castle to visitors, as well as lockdown.

You see after the lecture the students mingling outside Durham Castle and Durham Cathedral, with the two closely attached. From the entrance to Durham Castle, a path surrounded on its sides by curtain walls takes you to the open palace green that opens up onto other university buildings and Durham Cathedral. One scene involving Moriarty talking to Dudley clearly takes place on the green with the Cathedral in the background, with the area mostly unchanged from how it looked in the late-1800s and how it appears in the anime.

This scene is modeled on the walk from the Castle to the exterior cathedral, and if you compare the above shots to the below video, this comparison becomes most noticeable.

Put this all together and the whole anime is surprisingly accurate to reality. You could recreate many of the scenes from the episode by spending just a few hours in Durham.

Some unnamed locations can be tracked down if you look hard enough, though due to their nature as secondary locations not based on famous landmarks, creative liberties are taken in places. Take the bar that Frida worked in. Though I wouldn’t call it a 100%-accurate recreation, comparing the exterior of the bar in Moriarty the Patriot to one of the bridges leading to Durham City Center, you can roughly pinpoint the location. Even the classic lampposts remain, although nowadays they’re powered by the wonders of LED lightbulbs. 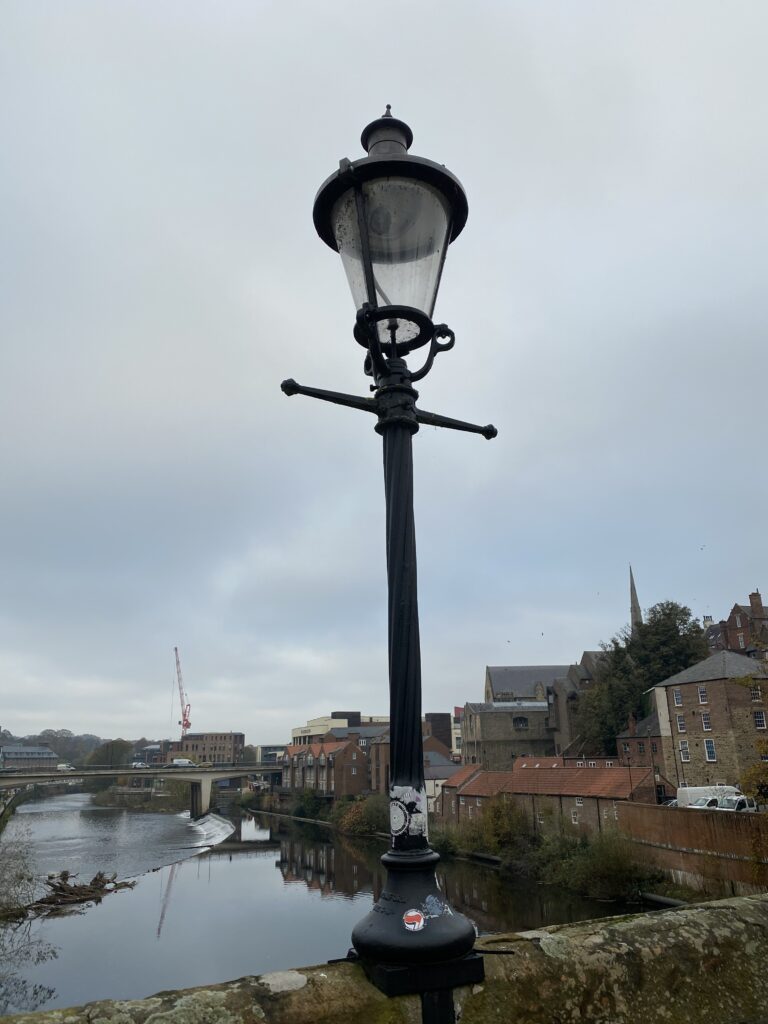 Durham City is a fascinating place to visit as a tourist due to the city being firmly rooted in the past, but this historical accuracy also means that many locations look exactly as they do in Moriarty the Patriot because Durham City hasn’t been modernized beyond the period in which the anime is set. If you’re a fan of the anime and happen to be in the area (when it’s safe to do so), it could be a fun day out!

Second Cour of Moriarty the Patriot Previewed in New Trailer