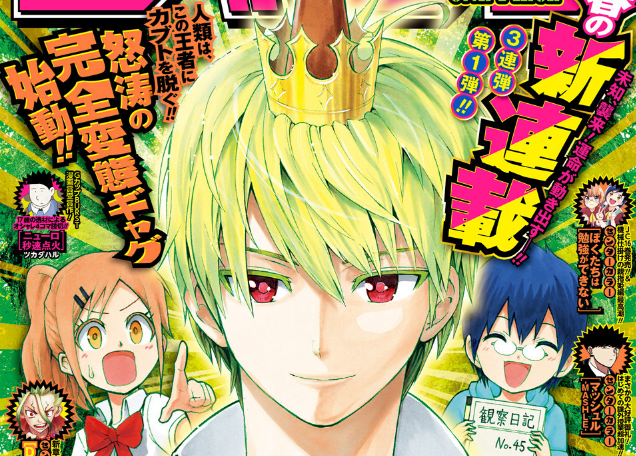 Hello there and welcome to Your Manga Week. Finding time to keep up with all the manga that releases on a weekly basis can be difficult, so I’m here to tell you what’s worth your time and what’s not. We’ll also be discussing the story and arc developments as they come. This week, we’re talking Moriking chapter 1, Dr. STONE chapter 147, and Chainsaw Man chapter 66.

A flurry of announcements arrived last week as the Coronavirus (COVID-19) hit the manga industry – the most relevant to this column, of course, being the news that issue 21 of Weekly Shonen Jump was being delayed. As a result, there will be no column next week, so let’s savor the chapters we have at the moment for a little longer. You can also check out the exclusive content we’re putting out this month to mark the new Ghost in the Shell: SAC_2045 anime, starting with an exclusive interview with directors Kenji Kamiyama and Shinji Aramaki.

Into this strange world of delays and production stoppages enters Moriking. Supposedly the first of three new series set to join the Weekly Shonen Jump roster after the departure of ZIPMAN!!, this series is drawn by two-time Jump veteran Tomohiro Hasegawa. But for however much experience Hasegawa may have, Moriking chapter 1 does not make a solid first impression.

The problem starts with the premise. Shota, a third-year elementary school student, brings home a rhinoceros beetle larvae to raise in time for his school’s insect-wrestling tournament. His sister, Shoko, isn’t too happy about it given that she hates bugs, but lets him do it anyway out of the kindness of her heart. She soon rejects that decision, however, as the larva transforms from a diminutive bug into an attractive young man upon completing its metamorphosis. 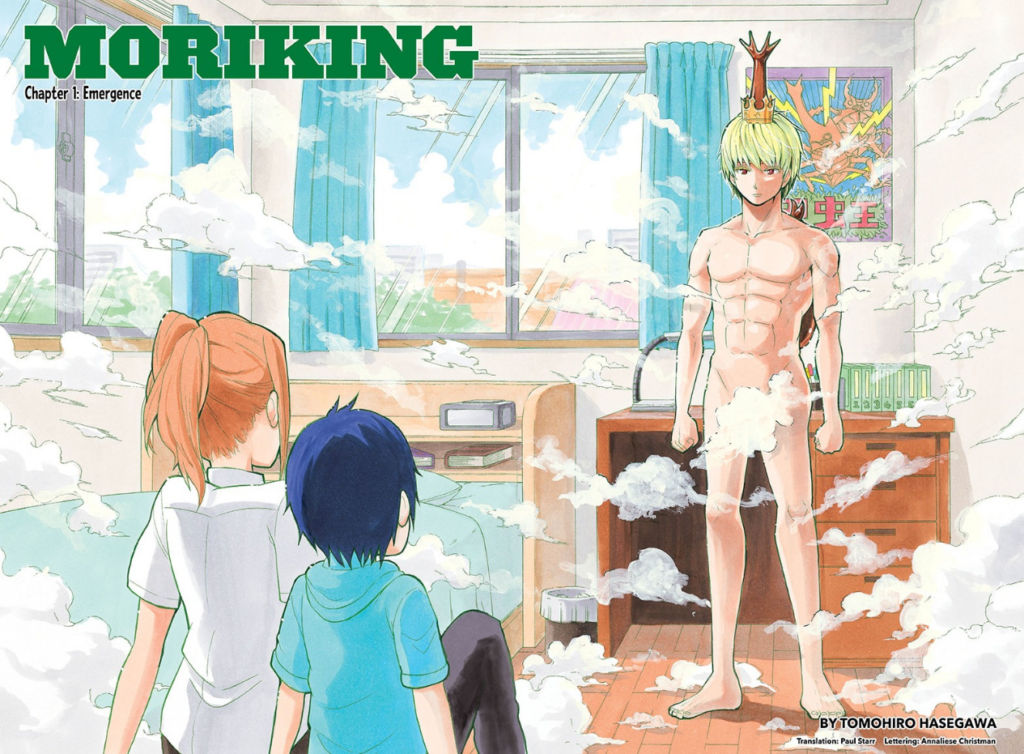 If you already think that sounds bizarre enough, wait until you hear this: as it turns out, Moriking (which is the name that Shota gives to the beetle) is destined to become the ‘Lord of All Insects’ and set out from his underground home to learn more about the ways of the world and prove his worth to his subjects. As a result, the Aikawa household is now saddled with this strange character, much to Shoko’s chagrin.

As this brief synopsis of Moriking chapter 1 no doubt makes clear, the series is premised on comedy, at least for the moment. The problem comes, then, when only some of the gags make their mark: some made me laugh, such as the moment when Moriking started to walk up the wall and participated in the insect-wrestling competition despite his size, but the majority of them feel a little too over-the-top, relying on shouty dialogue that does not gel with my particular sense of humor.

Nevertheless, there were some aspects to Moriking chapter 1 that did get me onside. Shoko and the titular insect’s relationship is darkly amusing given her desire for a boyfriend – the monkey’s paw curled a little too hard in this one – and the protagonist’s backstory in the insect world has my interest piqued; the world he leaves isn’t an anarchistic one, rather one of order and a clear hierarchy. It’s a little bit like ANTZ, but with more bishonen – I’m almost more interested in finding more about that than anything else.

That last point, in turn, has me hoping that this series will prove its worth later on. There are plenty of series in Weekly Shonen Jump that have a rough start, with the latest example of this being Agravity Boys by Atsushi Nakamura. Tomohiro Hasegawa’s relative wealth of experience also has me confident that he at least has some idea of how to turn things around. So while it doesn’t make for a very exciting conclusion, the kind of impression that Moriking chapter 1 leaves is definitely one of ‘let’s wait and see.’

Coincidentally, Dr. STONE chapter 147 delivers to us a story development that we have been waiting to see for a very long time. After their 40-day voyage across the Pacific – made shorter via Senku’s intervention – the Kingdom of Science finally touches down on the American continent. This literally opens up a whole new world for the series to explore, and it would be an understatement to say that I am excited to see what comes of it.

But before we get to that, we have to dial things back a bit. Before Senku and crew can get to America, they first have to navigate their way across the Pacific – something which is made that much more difficult by the sudden arrival of stormy weather. The scientist’s big plan was to use the radio transmitter that they left back in Japan to get a time reading from the rest of Ishigami village, which would give them a longitudinal reading. Combine this with the position of the sun – a latitudinal reading – and they would be able to pinpoint exactly their location on the high seas. But with the storm blocking the sun, all seems lost. 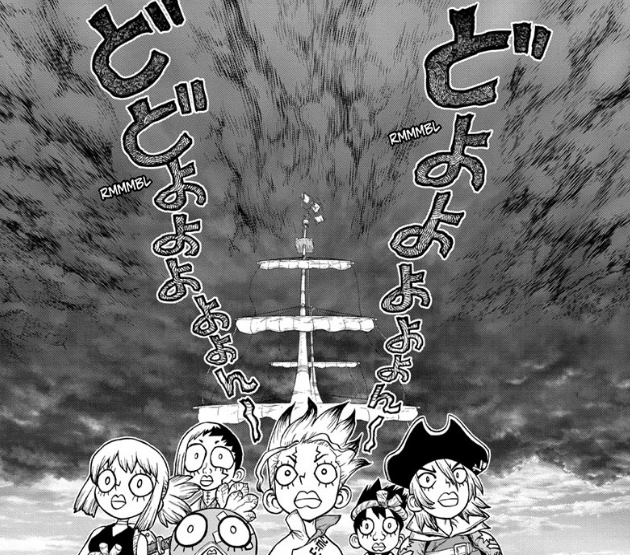 A little lesson from human history, however, offers them a way out. As Senku states at the beginning of Dr. STONE chapter 147, the Vikings were able to navigate their way across the Pacific Ocean and make landfall in North America (more specifically, Greenland) thanks to the use of a sunstone – a supposedly ‘magical’ item that was, in reality, nothing more than a prism used to pinpoint the location of the sun.

Here, Chrome’s past experiences as a ‘sorcerer’ come into play: he manages to find a suitable lump of calcite among his collection to get Kohaku to fashion into a prism. Using this allows the crew to know the location of the sun even if it is blocked – allowing them to finally make landfall in America.

In this sense,  the introduction to Dr. STONE chapter 147 makes it clear that this historical artifact is going to be the solution (Chekhov’s gun and all that), but the execution more than makes up for it. Firstly, we get an excellent moment between Senku and Chrome that shows just how far the latter has come under the former’s tutelage. There’s also the whole idea of using examples of science in history that is particularly interesting, and I wish that the series would do so more often. Finally, Boichi’s art and paneling should be given credit, as usual, for being constantly engaging. 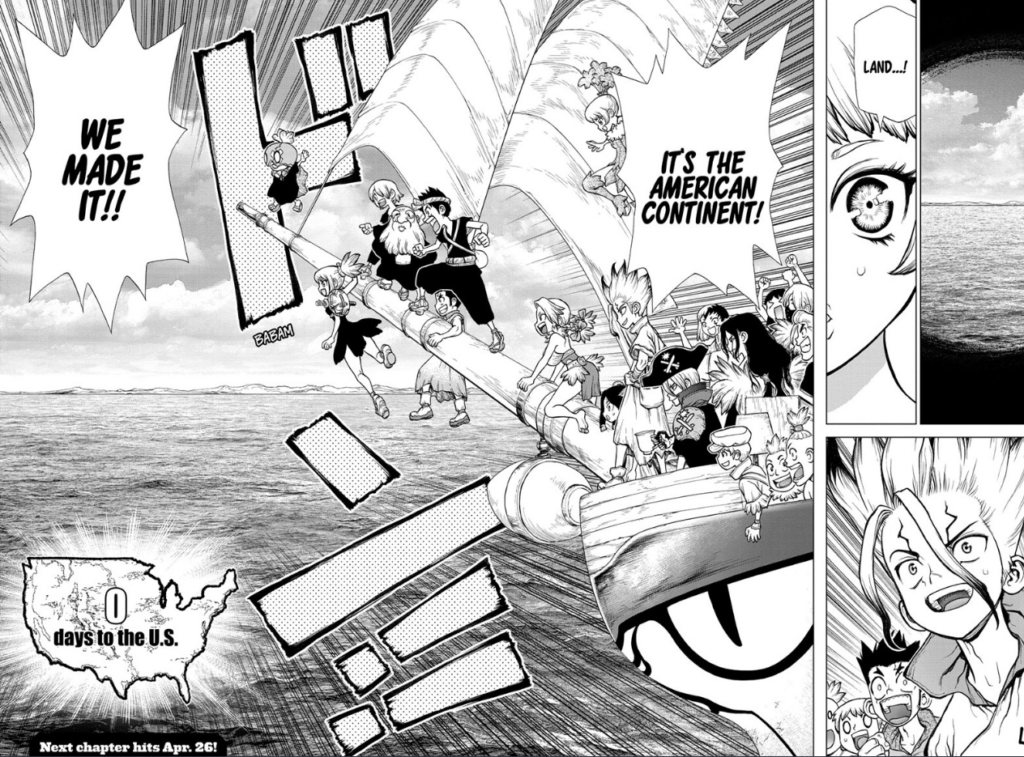 If you thought that Riichiro Inagaki somehow wasn’t going to be able to integrate science into a naval voyage, think again. So far, we’ve had gambling psychology, bar chemistry, and now prism refraction – proving that there is science everywhere, if only you know where to look for it.

It’s almost a shame, then, that Dr. STONE’s ‘boat arc’ is coming to an end so soon. There were no doubt countless other aspects to naval voyage that Inagaki could have inserted science into, but then again too many side quests would have distracted from the main plot. Plus, with things dangling on such a massive cliffhanger, perhaps it was wise to get things moving sooner rather than later.

As I said, Senku and crew landing in America at the end of Dr. STONE chapter 147 is a pretty massive moment. Just what lies ahead of them in the Land of the Free is unknown, but I have no doubt that Inagaki has some incredible things hidden up his sleeve. I’m still holding out for that Undead Unluck cameo, but we’ll just have to wait and see.

While Dr. STONE chapter 147 touches down in the Land of the Free, Chainsaw Man chapter 66 is still being tormented in the Land of Eternal Damnation. Ever since being sent to hell by the Hell Devil, things have been going from bad to worse for Denji and his friends: not only were they trapped in another dimension, but a super powerful Devil known as the ‘Darkness Devil’ turned up and started slicing all of their limbs off. Talk about a Blue Monday.

Chainsaw Man chapter 66 offers a little respite from this as Makima arrives to save the day, but for the most part, it is continued suffering for the poor Public Safety Devil Hunters. The scenes where some of my favorite characters (Aki and the Angel Devil) are killed are somehow made even more terrifying by the complete lack of dialogue and movement from the enemy – giving the entire first part of the chapter an almost Lynchian sense of supernatural horror, incomprehensibly terrifying in its incomprehensibility. 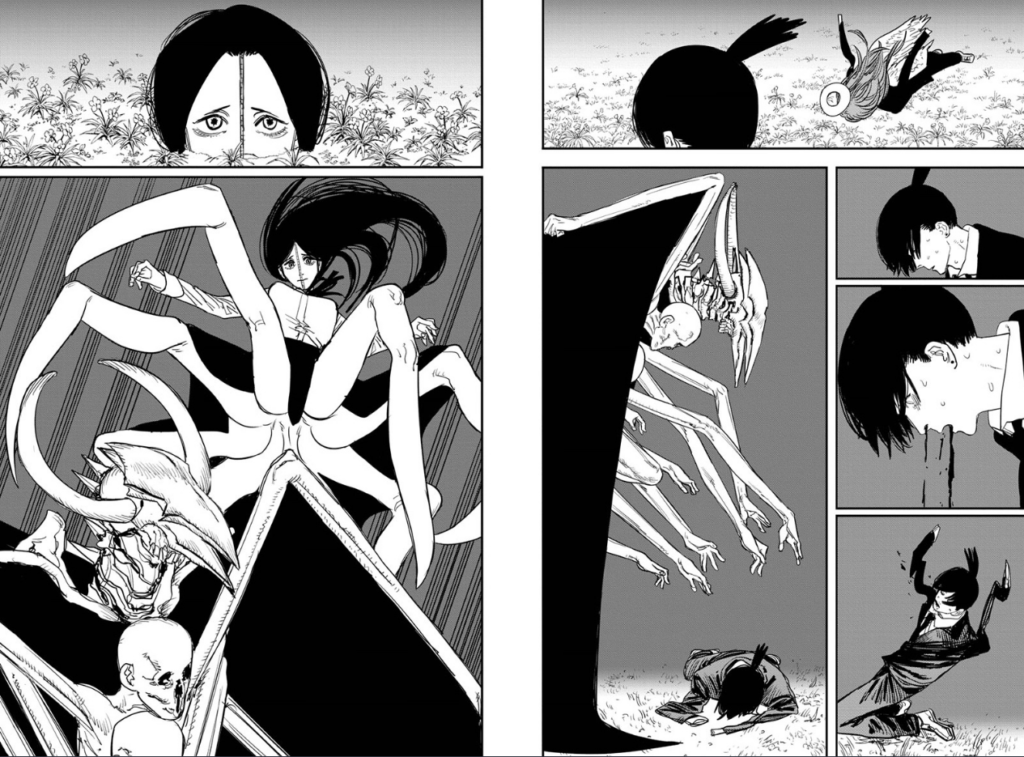 Nevertheless, once Makima arrives, things take at least a slight turn for the better. She’s able to stand up to the awe-inspiring power of the Darkness Devil, even if a couple of her limbs are broken in the process. Of course, this just adds to the mystery surrounding her character – just how powerful is she? What kind of powers does she have? How does she know how to stand up to one of ‘The Transcendent’? So many questions, not many answers.

Even with all of her power, however, Makima isn’t able to fend off the Darkness Devil completely. Eventually, she offers herself to the Hell Devil in return for transportation back to the real world, where she is severely injured. It’s then up to Denji to defend his lady love from Santa Claus at the end of Chainsaw Man chapter 66, who has somehow been transformed and is on the attack. Whether or not he will be able to do so in his injured state is another question. 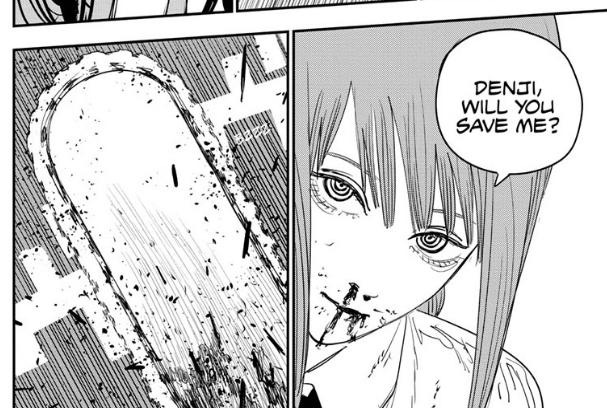 Now that our characters are out of hell, I can safely say that this arc has played out very differently from what I expected. Back when assassins all around the world learned of Denji’s existence and set off on the hunt, I thought that this arc would be similar to the Katana Devil arc, only longer: a series of clashes with different foes who have different powers from different parts of the world. Instead, we took a trip to hell and back. Life comes at you fast sometimes.

But if there is one thing that Tatsuki Fujimoto does well, it’s subverting expectations. Just as Fire Punch begins as a regular story of heroes and villains and slowly becomes something else entirely, so too has this latest arc of Chainsaw Man: taking us on a rollercoaster ride through the deepest, wildest recesses of the author’s mind with hardly a pause for breath. I don’t know about you, but I’m loving every second of it.