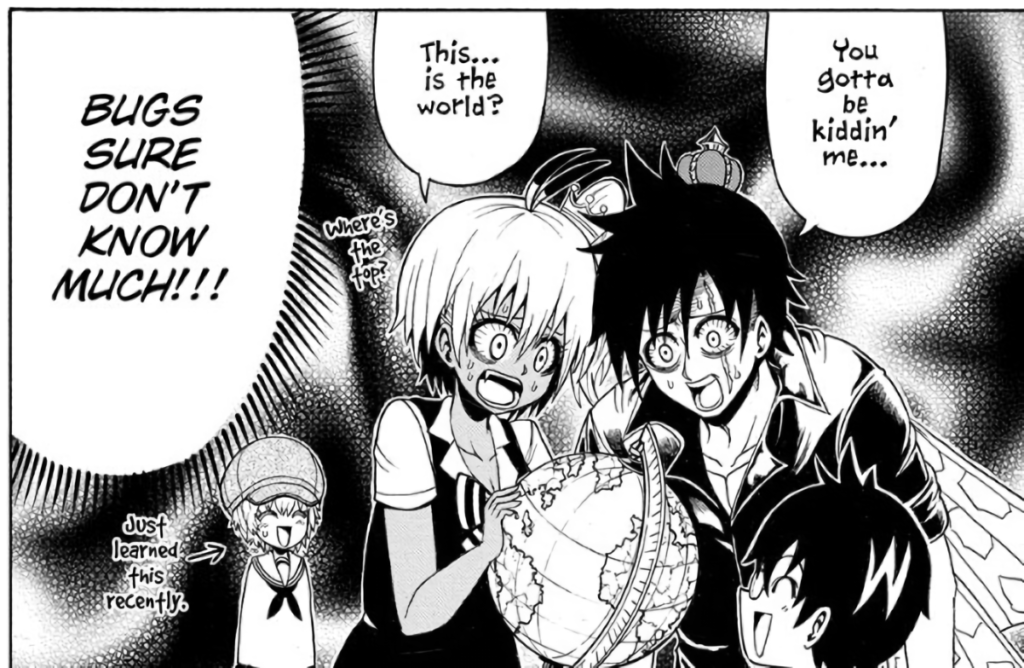 The beginning of a new week can only mean one thing: time for new Weekly Shonen Jump! Shueisha’s legendary manga magazine has been releasing every week for over 50 years at this point, and it still has enough exciting series in its roster to justify its hallowed status. Plus, with VIZ Media now publishing the entire thing in English, there’s never been a better time to jump in. In this column, Jacob investigates the latest and greatest in the world of Weekly Shonen Jump, telling you what’s worth your time and what’s not. This week, we’re chatting Moriking chapter 27, MASHLE chapter 38, My Hero Academia chapter 290.

So, here’s the good news: there are two new series joining the Weekly Shonen Jump line-up over the next two weeks, and none of them appear to have anything to do with demons or the supernatural. Score. But then, there’s the bad news: one of them will be from Mitsutoshi Shimabukuro, an author who – by my reckoning – should no longer be working in light of previous offences. Whether the sentence was served or not is beside the question; it leaves a bad taste in my mouth. Luckily, however, I will be on vacation next week, so whether or not I even cover Build King will be up to me. I’m still thinking about it.

It seems fortunate that, just as I got around to writing something on Moriking, the series drops a very important chapter. Yes, that’s right: Tomohiro Hasegawa’s series is not ending just yet despite the low sales – in fact, it is starting a new arc on a completely different scale to anything we’ve seen before.

We got the bold declaration last week that “The battle to determine the ruler of the planet – the Hoshiking” had “finally begun,” but this week’s Moriking chapter 27 fills us in on what exactly this means. Plus, in true Hasegawa fashion, it’s surprisingly well-thought out. 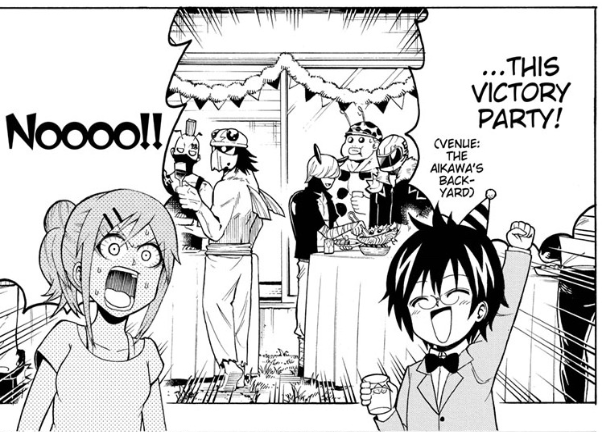 Moriking chapter 27 starts off with a victory party that very much reminded me of the final chapter of Yui Kamio Lets Loose, if only because I had cancelation on the mind. Friends and foe alike appear in casual dress, enjoying a drink or two and a plate from the buffet. It appears as if everything has been wrapped up – that is, until two foes crash land in the Aizawa family garden.

Introducing themselves as Hercules and Caucasus respectively, they go on to explain the concept behind the Hoshiking. Basically, there are five candidates (presumably one for each continent) that emerge victorious from their respective tournaments – in Japan’s case, the battle to determine the Forest King (Moriking). They then duke it out among themselves to determine the ruler of Earth, the Hoshiking (literally meaning Star King). There’s a lot of double meaning here, but I hope I’ve explained it well.

So, it appears as if the tournament that Moriking has been tracking up until this point has been merely the preliminary tournament to the big one, only taking place “once every few hundred million years.” Neat.

It’s a good job that Moriking chapter 27 brings up Hunter x Hunter itself (in relation to the unfair rules of the bracket) because that makes me appear less insane when I say that this reminds of the Dark Continent reveal at the end of the Chairman Election arc, in the sense that it expands the world exponentially. That’s a compliment, by the way.

Time will only tell whether Moriking has time to expand on this reveal in chapter 27, however, given that cancelation still appears to be all but inevitable – the series’ second volume didn’t make it onto any rankings, Oricon or Shoseki or otherwise.

In this sense, Moriking chapter 27 might just end up like the prelude to the Dark Continent in more ways than we know it, as it may never get a chance to follow up on the interesting seeds that it has planted in much the same way that health problems impede Yoshihiro Togashi.

Still, I’d be lying if I said that I didn’t finish Moriking chapter 27 with a sense of enthusiasm, as I’ve always thought that Tomohiro Hasegawa’s series deserved more credit than it is given. This reveal was clearly planned from the beginning, judging from the double meaning of the series’ title, and one can only imagine how much better it would have been if it had had a little more time. Can you imagine Hasegawa dropping this bombshell with a bigger fanbase? You’d never hear the end of it.

In contrast to Moriking chapter 27, MASHLE chapter 38 feels like the latest installment of a series desperately trying to find more ideas to fill the time afforded to it by its surprising momentum.

Hajime Komoto’s shift from gag series to battle manga has been discussed multiple times at this point, but it is worth reiterating that it has not been a smooth transition. While sales may have improved and the publisher is reaping the rewards, there are still several building blocks that are missing for a solid foundation – a proper power system, for one.

Nevertheless, MASHLE chapter 38 presents a great opportunity. Now that this latest arc is out of the way – proving, for the most part, that the series can work as a battle manga – Komoto has a golden opportunity to step back a bit, reevaluate his approach up until this point, and make the changes necessary to ensure the series’ continued longevity.

I hope to God that he does this, because I don’t know how much more I can take.

While Abel proved to be a more compelling antagonist than I perhaps initially gave him credit for (mainly thanks to his back story), Komoto still has a problem with creating pretty one-dimensional characters.

In Mash’s case, this is played for laughs, but makes the rest of the supporting cast pretty bland. So color me surprised when Lance actually turned out to be a member of Innocent Zero (unknown whether this was just a disguise or not) back in chapter 35, an organization involved in all sorts of evil magical crimes.

Again, there isn’t really much to this character other than “he’s evil” and “he’s crazy,” evidenced by his behavior and bizarre dress sense. Luckily, MASHLE chapter 38 is all about how Mash beats him: smashing through his spell-reflecting mirror and kicking him in the face. 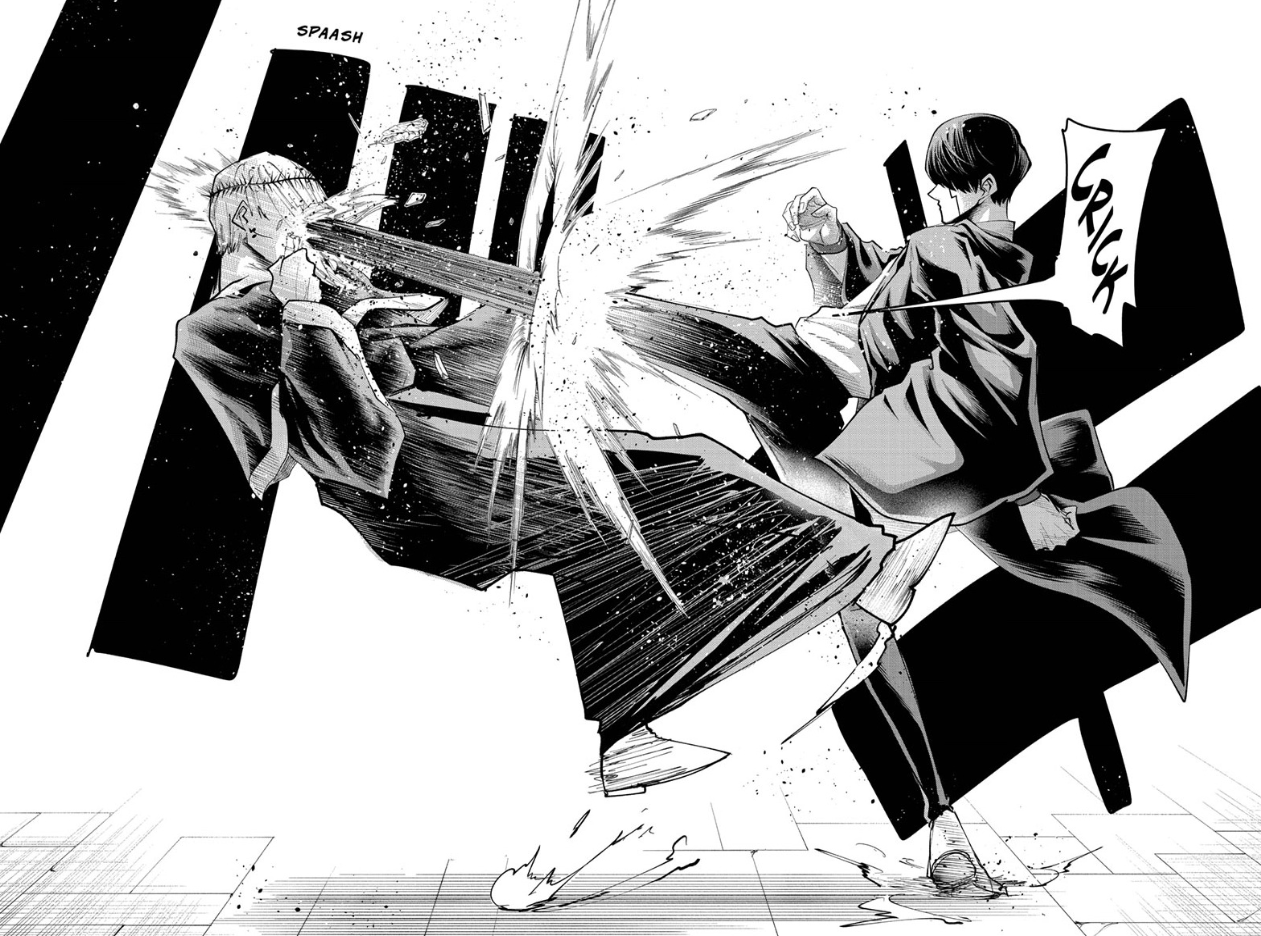 Unfortunately, this reveals to everyone in the room that Mash doesn’t actually use magic, which is a secret he has been trying to keep under wraps ever since he enrolled at Easton Magic Academy. This is a pretty big deal, as anyone who does not have magic in this universe is supposed to be exterminated – as shown to us in the pretty dark first chapter.

As a result, MASHLE chapter 38 leaves off in a promising place. Not only is the bland character gone, Komoto now has a perfect excuse to send Mash on a training arc – to be able to feign magical ability to a tribunal of bloodthirsty magic eugenicists. Even if he doesn’t learn magic as a result of it (apparently, only those born with the ability can do so in this universe) this would be a perfect opportunity to lay down some ground rules about this universe, which is exactly what the series needs.

It is very unlikely that Hajime Komoto will heed the advice given to him by my thoughts on MASHLE chapter 38, but perhaps he would stand to learn the lessons imparted to him by Kohei Horikoshi in My Hero Academia chapter 290.

This appears to have become a routine phrase at this point, but I haven’t covered the series’ latest Paranormal Liberation War arc nearly as much as I ought to have. This is because of two things: firstly, things are proceeding so thick and so fast that it is honestly hard to know which chapter to focus on. What is true one week could be completely different the next. Secondly, there’s simply been too much other good manga: Chainsaw Man, in particular, has taken up a lot of the third chapter spaces that My Hero Academia would have otherwise occupied.

Nevertheless, My Hero Academia chapter 290 is a great installment of the series to discuss in isolation – not only because it gives Hajime Komoto some tips on how to write MASHLE a little better, but also because it retroactively gives an otherwise inconspicuous arc some more meaning.

When the Endeavor Agency arc wrapped up this time last year, I was left scratching my scratch at what it was exactly all about. True, Deku and others managed to improve their abilities somewhat, but the drama surrounding the Todoroki family was not resolved, instead leaving off on a mixed note. Whether or not the drama deserves to be resolved is another question, but it definitely felt like a bit inconclusive.

Fast forward a year, and My Hero Academia chapter 290 makes it clear why Horikoshi took the time to explore that situation. Simply put: Dabi is Toya, Endeavor’s oldest son who was presumed dead up until this point. 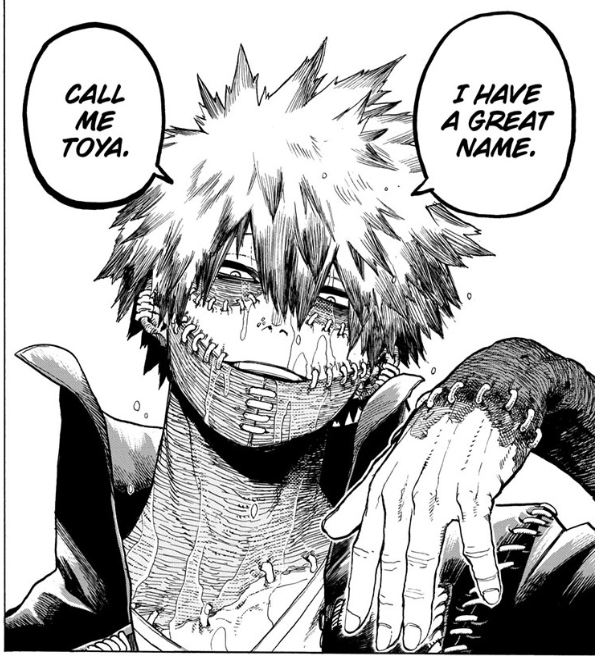 The presence of Toya was a constant one in the Endeavor Agency arc, as we saw multiple times how his death was what really ripped the Todoroki family apart. We can see now that this was obviously Horikoshi’s way of preparing us for My Hero Academia chapter 290’s future revelation, but hindsight is 20/20. It wasn’t so obvious a year ago.

Given how affected Endeavor was by Toya’s death, it seems obvious that his return in the form of the murderous villain Dabi will have a profound effect on his mental state. It seems unlikely now that the heroes will be able to put down Shigaraki, especially since Gigantomachia has joined the fray. 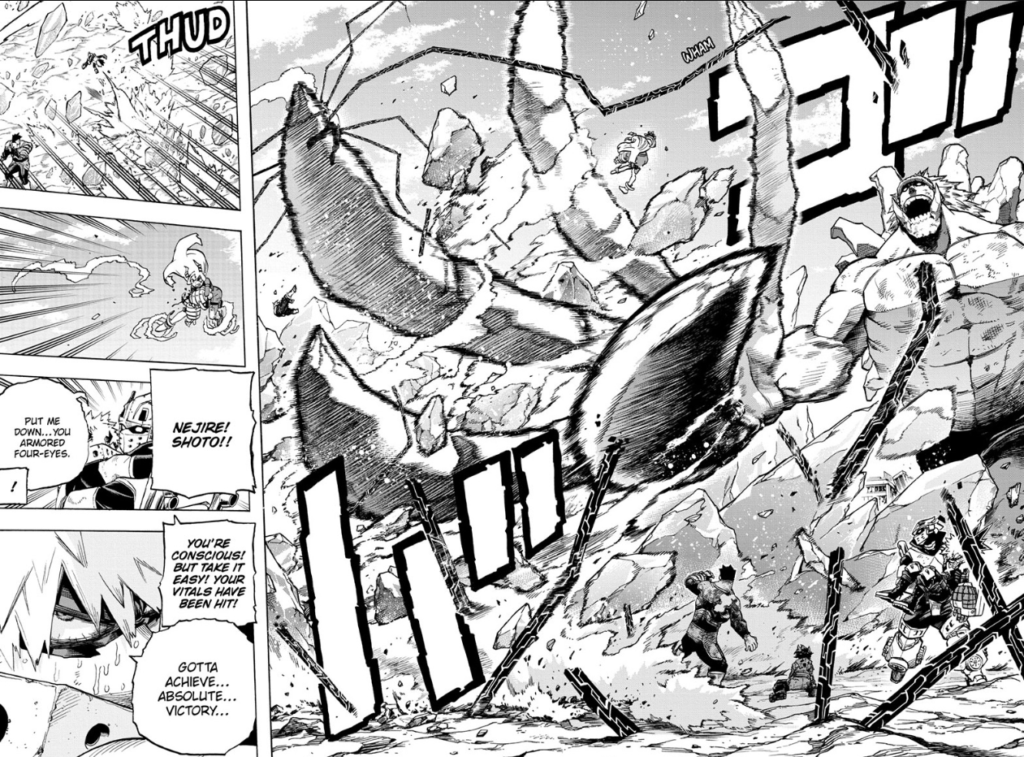 Furthermore, the League of Villains has also set their plan to destroy hero society in motion, not just in the form of literal destruction but also emotional. Dabi’s pre-recorded message, broadcast on live TV, is bound to have a large effect on people’s perceptions of heroes given that it airs all of the number one hero’s dirty laundry, including his mistreatment of his own family. Of course, the reader already knew all of this, but the wider public did not.

What’s more, the reveals in My Hero Academia chapter 290 are able to elicit more of a shock from the reader as they are related to characters that we already know and care about, instead of someone random disguised as someone else.

Crafting compelling characters is not an easy task, but one that is required for effective serialized storytelling in the pages of Weekly Shonen Jump.

You can read Moriking chapter 27, MASHLE chapter 38, and My Hero Academia chapter 290 for free via VIZ Media.