The beginning of a new week can only mean one thing: time for new Weekly Shonen Jump! This is where Jacob investigates the latest and greatest in the magazine, telling you what’s worth your time and what’s not. You can find coverage of other series under the tag Jump Time. Here’s Moriking chapter 33.

Alongside being surprisingly well structured and thought out, Moriking is also surprisingly philosophical. Just last week, the series attacked the idea of human exceptionalism, and this week’s chapter 33 does something similar: in the final battle for the throne of Hoshiking, Moriking tells us that happiness isn’t one-size-fits-all.

Admittedly, the set-up for this is a little silly. Moriking is facing off against Hercules, the ‘most powerful horned beetle in the world’ and his final opponent in the Hoshiking tournament. At first, it seems hopeless, until Hercules offers him a chance: show him what gives him such power, what he found here on this Earth. This appears to set up for a Spirit Bomb-type moment, where the supporting characters cheer Moriking on, but it turns out that they’re all too busy having fun to pay attention to the fight.

At first, this appears to be a dark parody of such ‘Lend me your power!’-typemoments that almost border on nihilism in the way that it represents human selfishness, but that quickly turns out not to be the case. The point that Moriking chapter 33 is trying to make is that humans are not simple organisms, unlike insects: they have their own beliefs and priorities, which often come into conflict with each other. This isn’t a world of life or death, but civilization. 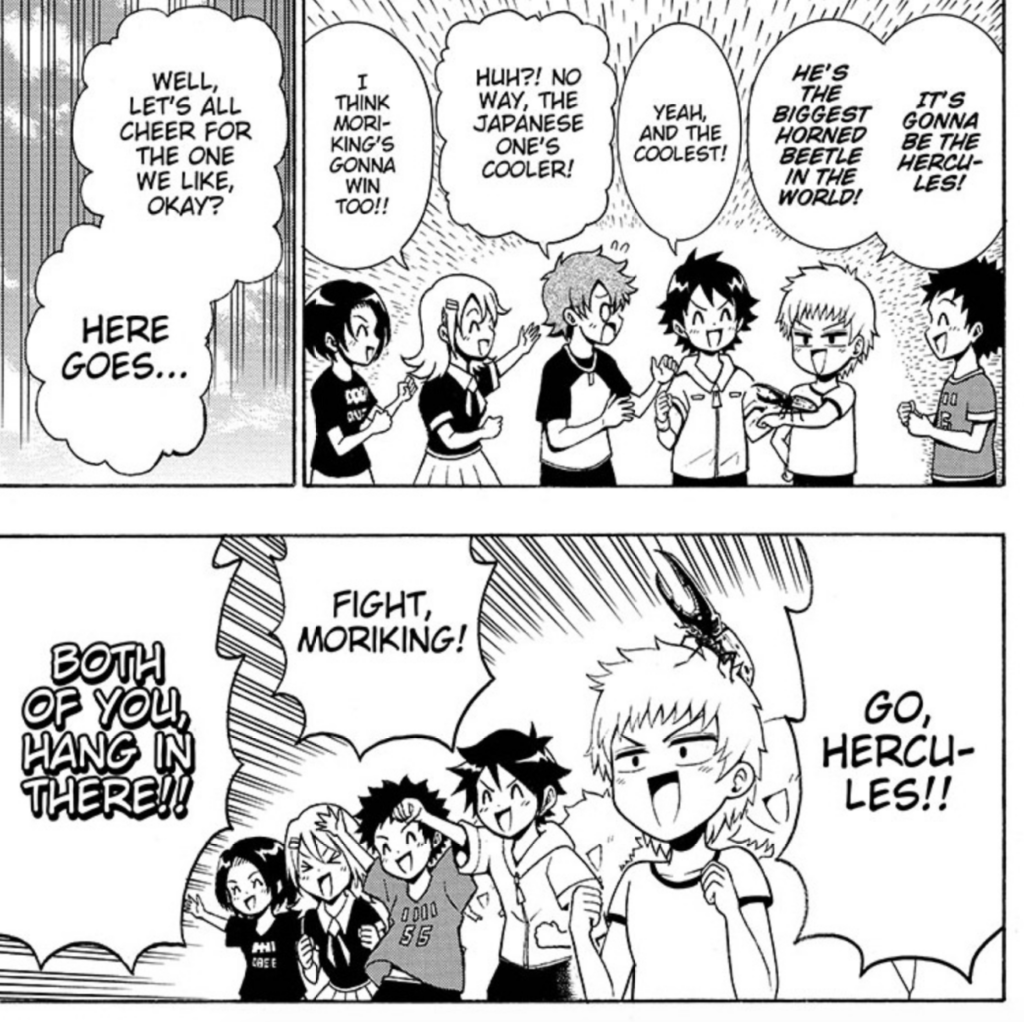 Probably my favorite part of Moriking chapter 33 is when the neighborhood kids are trying to figure out which insect they are going to support. They can’t come to an agreement, so they eventually decide to ‘cheer for the one [they] like,’ which perfectly sums up the variety and complexity of human thought. If Hercules was to become the Hoshiking, then he would no doubt try to stamp such things as this out because of his black-and-white worldview.

Moriking chapter 33 probably isn’t really that deep, but it did make me reflect on what happiness means and how it is different to different people. That’s doubly true for us enthusiasts, who are under constant pressure to conform to societal norms. I hope that we can all try to take a leaf out of Moriking’s book, especially during this festive period, learning to appreciate a diversity of opinions and appreciate one another just a little bit more. It might do us some good.

You can read Moriking chapter 33 for free via VIZ Media.