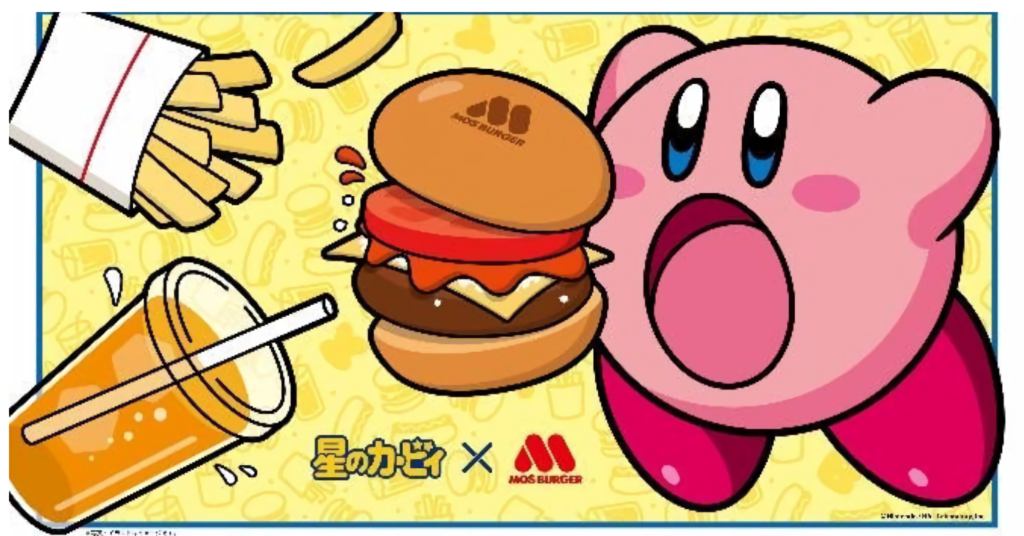 Japanese hamburger chain MOS Burger isn’t usually a chain that does many collaborations with third party IPs. They tend to keep their kid’s meals fairly simple and offer a toy that is equally as simple. Something along the lines of crayons or a spinning top or a simple paper soccer game. When I say simple, I really mean it. I honestly can’t even think of a time since I’ve lived in Tokyo for the last 3 years that I have seen MOS Burger collaborate with another company’s property. But that is all about to change later this month as the nationwide burger chain has announced a series of Kirby goods for their MOS Kids sets.

Running from September 17th until the middle of November, MOS Burger is getting the Kirby overhaul. Burgers will be wrapped in Kirby themed paper, the trays will feature Kirby, additionally, the MOS Kids sets will come with one of three random Kirby goodies. The goodies in question are a mini hand towel, a Kirby themed ballpoint pen, and a mini Kirby pouch. Each of the designs features our favorite little pink puff and the pen even features the star that Kirby uses to traverse the universe.

What has caused MOS Burger to want to undertake this promotion is beyond me, but I’m extremely happy about it because I can walk to MOS Burger from my apartment in Tokyo in about 5 minutes, so you can best believe that I’m going to be making a number of trips there so I can get all of my Kirby goods. You really can never have enough Kirby goods, I tell you.

The Kirby x MOS Burger campaign starts on September 17th and runs through the middle of November at all MOS Burger locations across Japan, so you will have plenty of time to get your Kirby on if you’re in the area of if you’re in one of the areas that Japan is re-opening travel to.