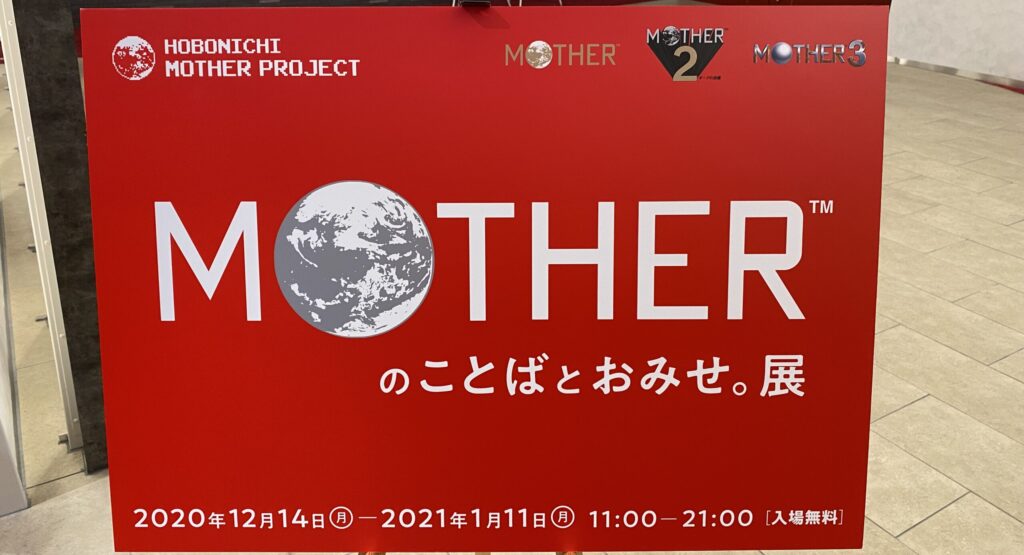 As a massive fan of the MOTHER / Earthbound franchise, 2020 has been incredibly exciting thanks to the HOBONICHI MOTHER PROJECT. Despite the franchise’s cult status in the west, it remains an incredibly successful and well loved property in Japan. Series creator Shigesato Itoi seems to know this all too well, and his company HOBO NIKKAN ITOI SHINBUN (commonly known as Hobonichi) has been capitalizing on it this year with a slew of new products, special re-issues of iconic merchandise, and a handful of gallery events taking place as a part of this ongoing project. The latest exhibition opened at the beginning of this week inside of Shibuya’s massive PARCO complex and I took some time today to go check it out for those who can’t make it yourself.

Based as a tie up with the newly released MOTHER no kotoba collection, a compilation of the written scripts from all 3 Japanese MOTHER games which comes in a bright red display box, it’s no wonder that it was front & center in the theming of the exhibition, but I’m getting ahead of myself. Let’s start at the beginning.

When you step off of the escalators to the 8th floor of PARCO you’re greeted with a video display that shows a digital poster for the event with all of the pertinent details.

Rounding the corner into the actual gallery space, you’ll be greeted by a staff member who checks your temperature and tells you that while photos are allowed, video is not. Just behind them is a giant replica of the MOTHER no kotoba collection box set and the starting point for the exhibition itself. 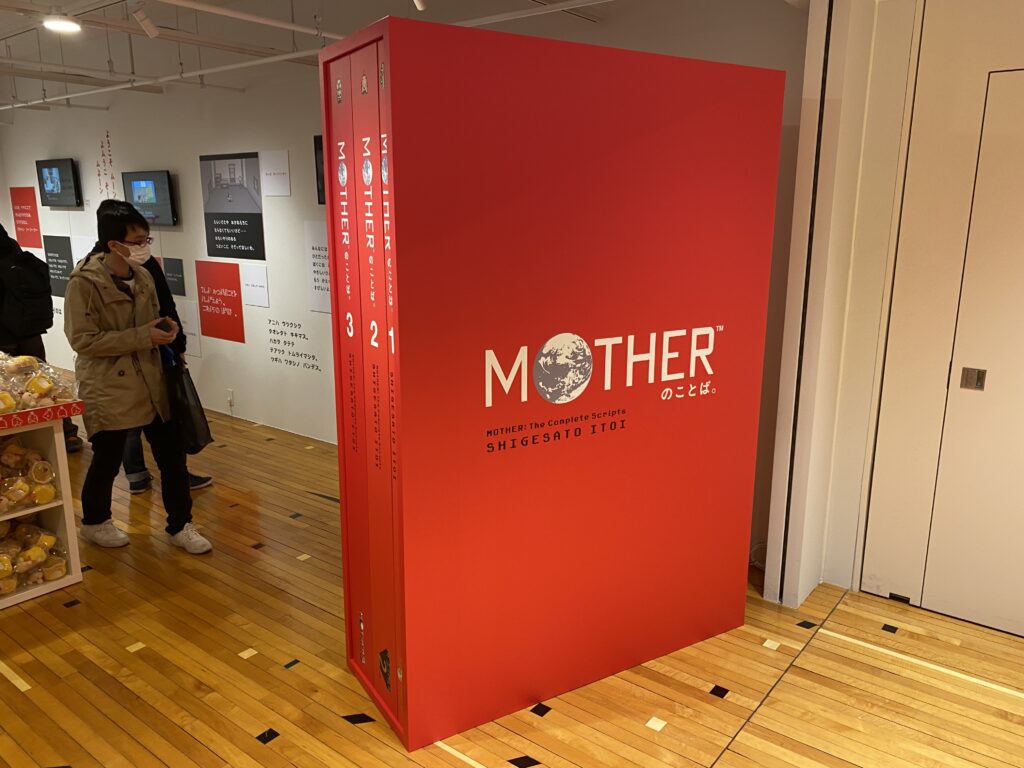 Lining the walls of the gallery space is a series of video monitors playing gameplay footage, surrounded by lines from the different games in the franchise all while music from the various MOTHER soundtracks play overhead.

Following the script and video monitors around the gallery you eventually end up at what I think might just be the centerpiece of the entire gallery, original story sheets from MOTHER 2 handwritten by Shigesato Itoi himself. As you’ll see in a moment, there’s a ton of amazing rare stuff on display but this is truly the highlight. 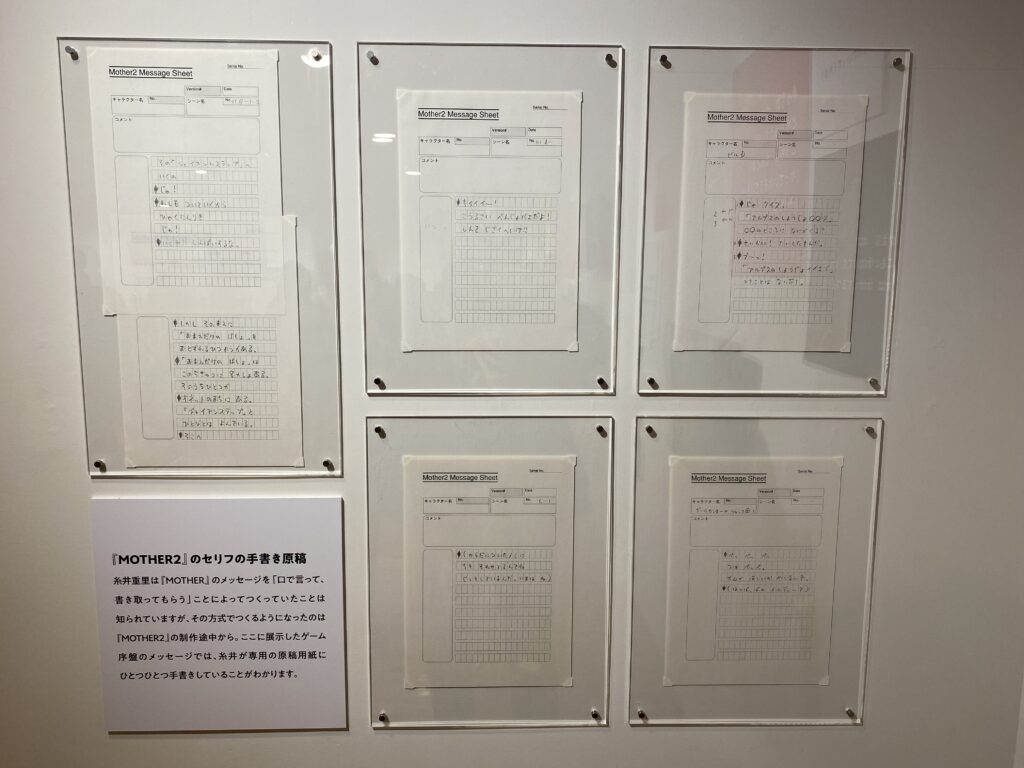 Right next to the manuscript sheets you’ll find what looks like an office setup with a treasure trove of MOTHER series merchandise. The rarest of the rare is here from the MOTHER 2 sukajan given to members of the development team to the Mach Pizza air freshener and original promo poster for the US release of Earthbound. Many of these items on display are highly sought after and coveted by fans of the franchise so it was amazing to get to see a lot of this stuff in person. I have a handful of really cool pieces in my own collection, but this is museum level.

In addition to the displays adorning the walls of the exhibition, picture boxes are hung from the ceiling throughout with even more lines from the 3 games and screenshots to compliment them.

In the middle of everything is what amounts to a massive gift shop with just about every item that has been released as part of the HOBONICHI MOTHER PROJECT for sale, with some that aren’t even on the webshop being available as well. Considering the length of the exhibition this time around I imagine they’ll be keeping healthy stock throughout in the chance that you get to visit before it closes up in January. There was way more than I bothered to take a picture of, but I couldn’t help but snap a quick photo of the Mr. Saturn & Master Belch plush that were for sale.

They even have the giant Dosei-san/Mr. Saturn plush which is available for pre-order on display so you can see it in person before placing your order. Even though I already have the original Banpresto release from a decade ago, I’d be lying if I said I wasn’t tempted to put an order in on this one too, it looks great up close. 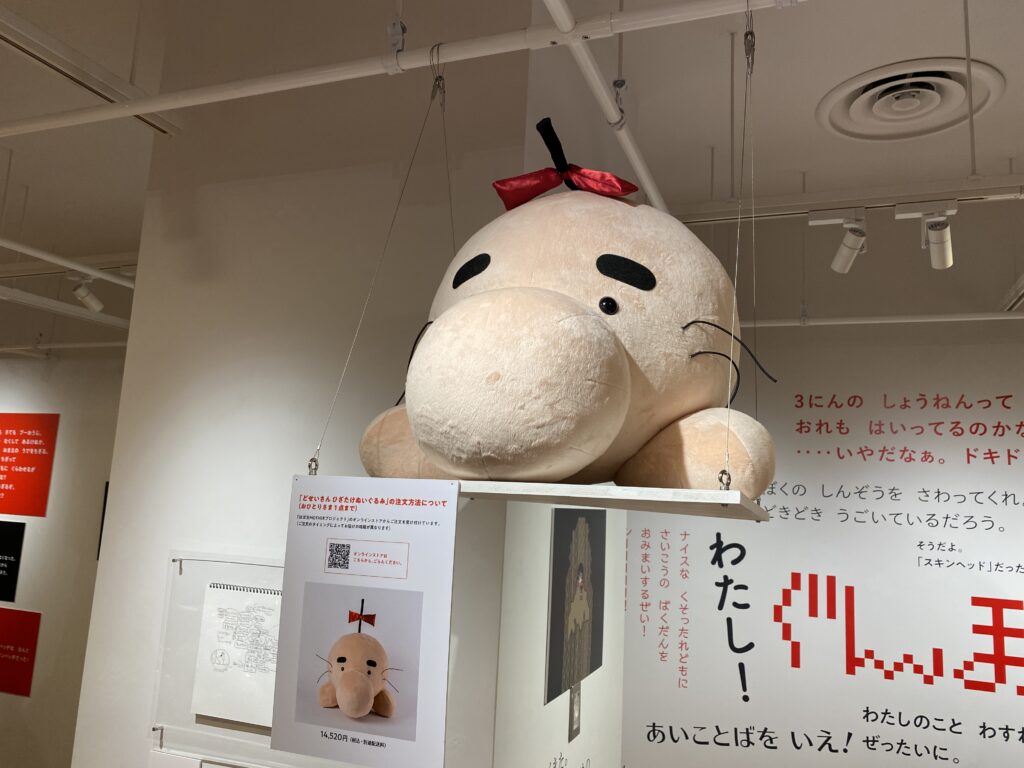 Unfortunately I didn’t have much time when I stopped by today so I took the photos and went on my way. I’ll be back in the coming days to pick up a number of the items they have up for sale though, as my ever growing MOTHER collection can never have enough additional merch. The exhibition is running until 11 January 2021, so if you happen to be in the Tokyo area it’s definitely worth stopping by to see in person even if you’re not interested in picking up some of the sweet merchandise. Here’s hoping this isn’t the last exhibition either, as this was a great follow up to the A.MELICA art gallery that took place earlier this year in the same space.