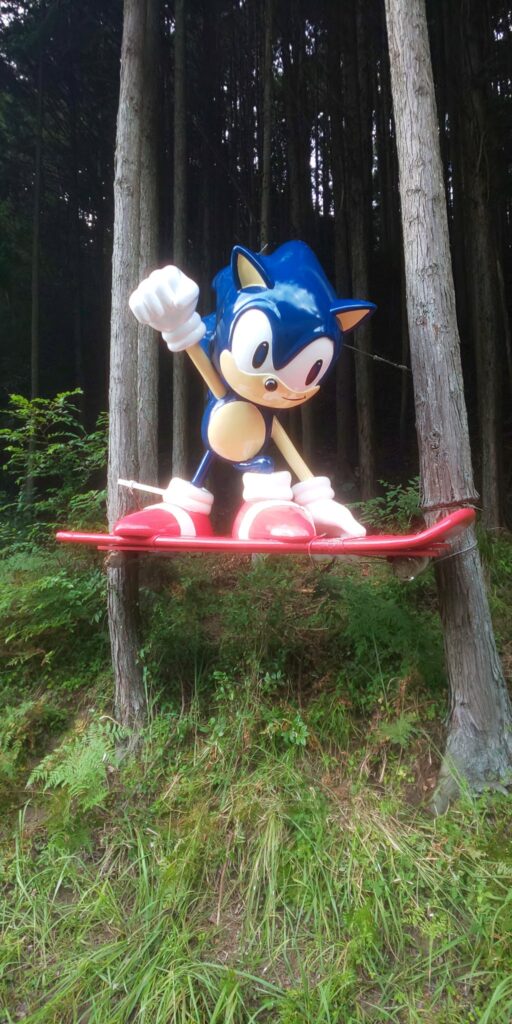 The “Mysterious Sonic Statue” deep in the woods of Mie Prefecture recently got a restorative makeover.

We can all rest easy knowing that there are people out there who care enough to give the video game character a shiny new look. The Sonic statue’s benefactors also gave him a new nose to replace the one that he had lost earlier.

As is befitting for a statue with a reputation for being strange and mysterious, nobody on the Interwebs seems to know for certain exactly who was responsible for restoring this Eighth Wonder of the World.

Sega hasn’t taken credit for it, although they are aware of the statue’s existence, as reported by YouTuber Badnik Mechanic.

However, some clues do exist as to who may have done the restoration, as we will see below.

According to Polygon and other sources, the statue of the chili dog-loving, Fastest Thing Alive has been hoverboarding in the mountains outside of Nabari, Mie, since at least 2009. However, it only became an Internet celebrity five years ago.

In December 2015, a motorcyclist found the statue and posted a photo of it on Twitter. Unfortunately, the guy was fuzzy on the details about the statue.

(He has apparently changed his Twitter handle since then.)

That mysterious find started a whole lot of online speculation, investigation, and sleuthing about where the statue was, where the statue came from, who put it there, and for what purpose. You can read more details in Petrit Elshani’s 2019 story for OTAQUEST here.

Eventually, most of the mystery was unraveled. According to Badnik Mechanic and J-Town, Sonic originally flew at Sega World Kadoma, an arcade in Kadoma City, Osaka. The statue can be seen in at least one ad for the place:

The arcade was owned by Yuji Kodera, CEO of Kodera Industry. Kodera took the statue when the arcade was moved to a new location (or possibly when it was refurbished).  The statue serves as a landmark sign of sorts for his mountain villa.

One of Kodera’s children, who was interviewed by J-Town, did mention wanting to paint the statue. Hmmm.

So, it is certainly possible that the Kodera family decided to renovate the statue after years of Internet fame brought to light the statue’s deteriorating condition. It is also possible that fans of the statue either beat them to the punch or helped them out.

Incidentally, the statue is now also a PokéStop in Pokémon GO, although you’ll have to drive, bike, or hike into the rural mountains to use it. It’s not near a train station.

If you want to see the statue from the comfort of your own home, you can find it on Google Street Views.

According to the website, Google’s camera car drove by the statue in January 2013, so you’ll see the statue as it looked before the restoration.

In any case, the not-so-mysterious Sonic statue appears to be almost ridiculously shiny now.  Thank you, Sonic statue restorers, whoever you are.