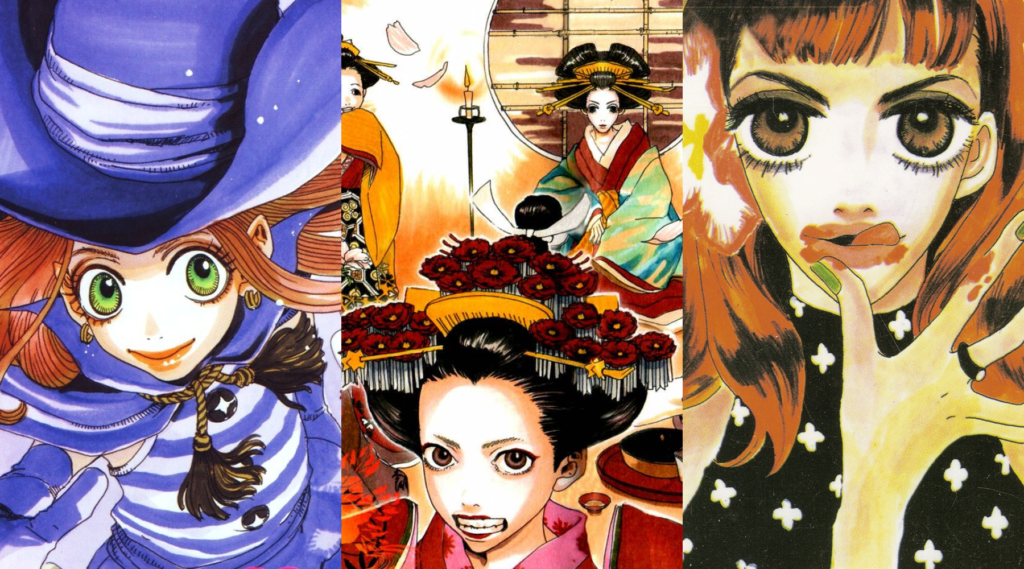 The josei tradition gets painfully under-represented in both the western manga market and the anime landscape. The United States see significantly more borderline soft-core pornographic Boys’ Love manga and a dime-a-dozen isekai light novels than works made for adult women, a real shame since the ‘genre’s’ known to channel some of the most true-to-life manga story-telling out there.

We strive to familiarize fans with the people that make their favorite anime and manga on Know the Creators, and while today’s subject Moyoco Anno needs no introduction amongst ‘graphic novel’ aficionados, extreme Evangelion fans, and the Japanese populace, it is exactly because josei being so downplayed in America that we had to talk about this particular creator sooner rather than later.

As a kid, Moyoco Anno loved reading British fairy tales, and enjoyed the shojo magazines of her era for their variety, though she calls Osamu Tezuka her biggest manga influence. When she had the chance to make Sugar Sugar Rune, a shojo-oriented magical girl story, she intentionally set out to avoid creating a ‘romantic’ shojo manga. She developed an interest in fashion early on, and her particular interest in kimono led her to making her seminal Sakuran.

She’s gone on a few hiatuses throughout her career and returned from a seven-year gap just last year. Anno once stated she’d like to see more manga made for women aged 40, 50, and so on. Having reached 50 herself, maybe we’ll see her continue to innovate past the shojo and josei thresholds, embarking on a largely uncharted-by-manga demographic.

She is indeed married to a certain famous Hideaki, but she was coincidentally born with the same last name, and they use different Kanji from one another.

Moyoco Anno in all her majesty can throw down one brilliant image on a page after the next. Whether we’re talking about her amazing illustrations or her actual on-page manga drafting, all that flows from her fingers results in lush eye-candy. Influenced by fashion from a young age, she’s continually strived to adorn her characters in a seemingly never-ending assortment of intricate and stylish fashions rendered with love.

Anno view her fashion illustration as a means of defining her characters, and not as its own end.

To achieve that level of detail, she’s taken to a lot of fine, intricate linework that gives us carpal tunnel vision of it. Despite this, even if you’ve removed clothing from the equation, Anno’s aptitude for striking facial expressions, combined with her unique approach to the Josei character-style is also unparalleled.

How Moyoco Anno draws only relays half the figurative and literal picture, because what she draws matters equally. While josei stories usually tend to be realistic, the ever opinionated and vocal Anno goes the extra mile to make sure her stories stick with audiences. Anno’s catalog skillfully blends idealistic beauty with cold hard reality in a manner all her own, willingly delving into the power dynamics found in romantic and sexual relationships, chronicling the effects of how over-focusing on our self-image detriments our mental health, and openly addressing what struggles modern Japanese women face in the workplace through her comics.

She considers many of her works cautionary tales, so to speak.

Approaching the 30-year mark in her career of making manga, with no stinkers in her bibliography, to narrow down our recommendation to just three choices pain us. However, this arbitrary number of recs we dedicated for our Know your Creators series helps you from being overwhelmed and helps us keep these articles at a reasonable length. Though, unfortunately, only some of her work’s available in English, so we’ve stuck with those.

Several of us OTAQUEST writers have waxed poetic about the glorious Sakuran film adaptation starring 2000s wild-child Anna Tsuchiya, and it’s paramount you watch it, but the original manga’s equally deserving of your attention. An audacious and haunting look at the lives of courtesans in Japan’s historical Edo Period, basically high-end escorts not to be mistaken with geisha, Moyoco Anno juxtaposes beautiful women decked in incredible fashions with the cruel and unusual lives that often played out for them.

The story centers specifically around one Kiyoha, sold into the brothel at a young age, enduring abuse from the older woman as she grows into a top-ranking Oiran. Arguably, the comic sees the josei manga maestro at her illustrative peak.

Moyoco Anno didn’t hold back when conceptualizing In Clothes Called Fat, and while we absolutely love her for brutally honest depictions of beauty and ugliness alike, some find this manga particularly hard to read. The blunt portrayal of bulimia found within rings true to life… which, in combination with Anno opting to employ a particularly frantic edge to her illustration, makes this comic meditation on unchecked mental health dehabilitation engaging but understandably a lot to take in.

20 years after its initial serialization in the Japanese manga magazine Young Berry, it got nominated for an Eisner upon its eventual English release.

Like many of the all-time great manga, like Nana and Hunter x Hunter to name a few, Hataraki Man entered a never-ending hiatus years ago and may remain unfinished for the rest of time. Despite that, Moyoco Anno’s take on Japanese workplace culture remains one of manga’s most beloved and deserves your time. It’s achieved a one-of-a-kind reputation for accuracy and relatability by actually being about office politics and why caring about your job is a double-edged sword, opposed to being an office romance like many josei manga.

No wonder she opted to run the comic in a seinen magazine, eschewing formal expectations for romantic fulfillment being the focal point of the comic like so many josei works tend to. While the manga itself is not actually available stateside, you can pick up its perfectly respectable anime adaptation from Sentai Filmworks, regularly on the cheap.