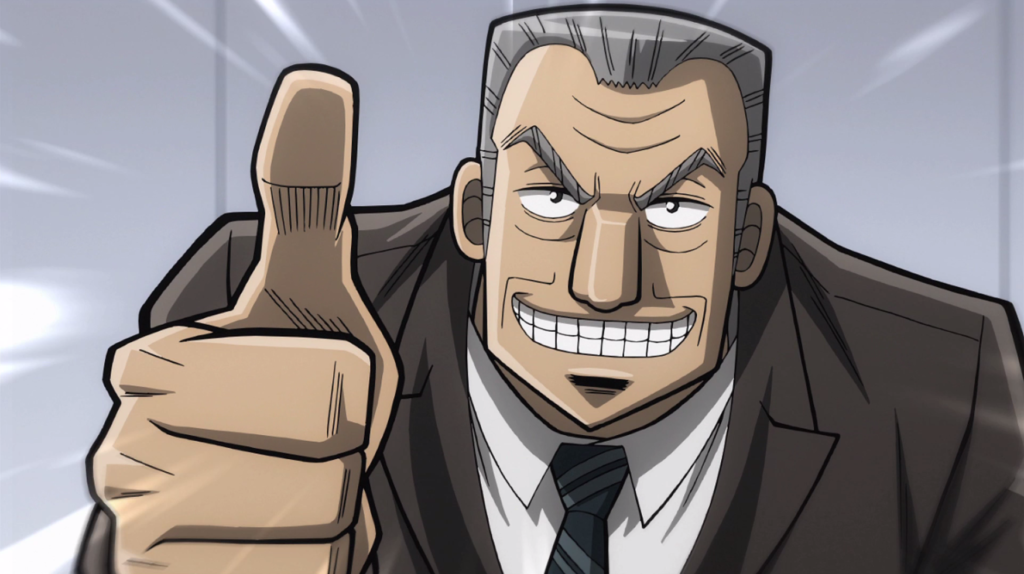 It took me quite a long time to get around to watching Kaiji – Ultimate Survivor. Yet during those longs years where I hadn’t seen it, I was often greeted with disbelief. Studio Madhouse’s anime adaptation of Nobuyuki Fukumoto’s high-stakes gambling manga is often considered the best of its genre and a firm favorite by many. So why, then, the Kaiji spinoff Mr. Tonegawa: Middle Management Blues seemingly disappeared off the face of the earth?

Certainly, back when it was airing, you could find conversation surrounding Tonegawa on various social media and forum websites. Perhaps it’s only natural that now that’s it finished airing, nobody talks about it anymore. That’s certainly the case for countless other seasonal shows, not least of which during the summer season of 2018 when Tonegawa started airing. At the time, I remember such shows as Angels of Death, BAKI and Cells at Work! commanding a fair amount of attention from the anime community, but you won’t hear much about them anymore, either. 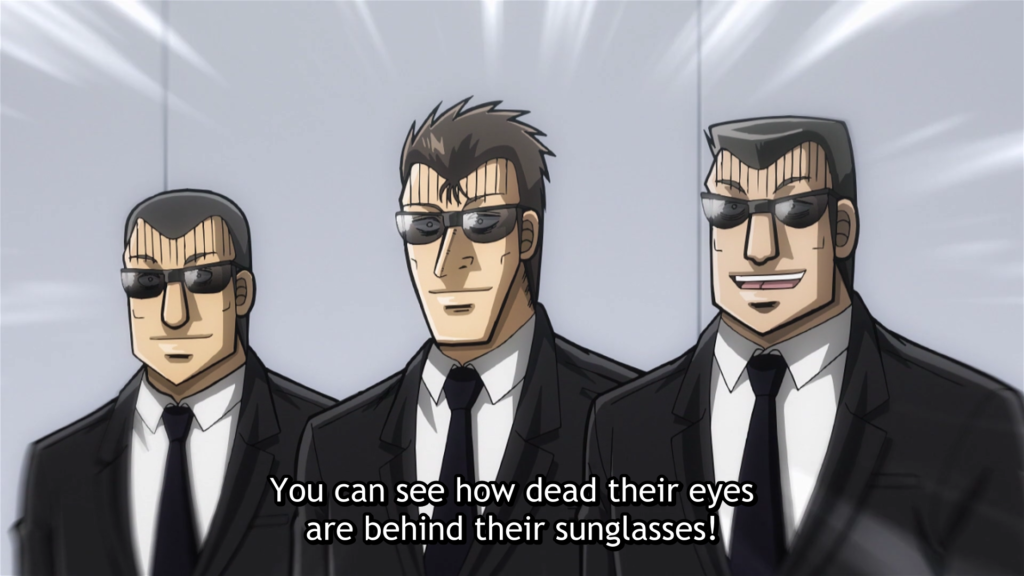 But Tonegawa should, by all intents and purposes, be a lot more popular than it is. Kaiji is considered a classic by many, and people have been dying to see more from the series – the manga of which is still ongoing – for years. Tonegawa is, therefore, a spinoff of an incredibly popular show with a very strong following, featuring one of the series’ most iconic antagonists, the titular Tonegawa Yukio. So shouldn’t it come at least a little bit closer to the popularity of its parent series?

One of the reasons I’m so late in talking about the show – it’s been almost twelve months since it began airing as of the time of writing – was that I fell behind in the first instance, but there also wasn’t much conversation online to spur me back into watching it, either. I didn’t really think much of it at the time, but now that I’ve watched the series to completion, this is very surprising. 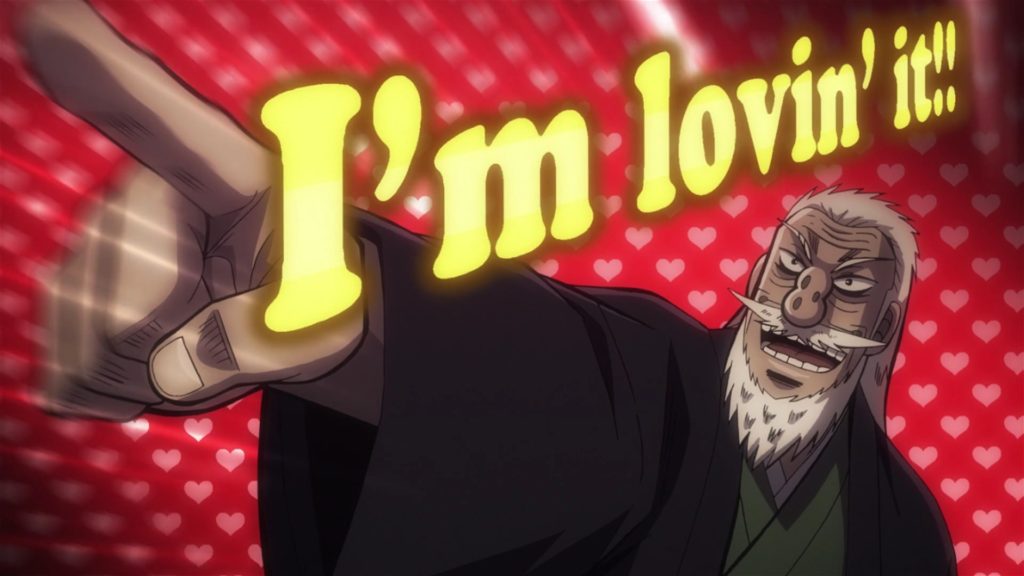 This is because Tonegawa is, for lack of a better word, really good. It’s got an incredibly memorable and entertaining cast of characters, who are able to thrive as individuals despite dressing in almost the exact same way. In addition, the show’s sense of comedic timing and penchant for dark humor make it both an effective and wholly unique animated comedy. It also provides key context and background to the events of Kaiji – Ultimate Survivor, particularly to the events of the first season. Oh, and it’s also got an absolutely incredible OP.

The second cour’s sudden decision to adapt another Kaiji spinoff manga in Chronicle of a Single Day Release: Hancho seemed unusual to me at the time, but in reality, adding yet another spinoff to the mix only increased the number of laughs and level of enjoyment I got out of the show as it entered into its second cour. All in all, I’d go as far to say that Tonegawa is one of the best anime comedies of all time, even if it is hampered from entering into the mainstream by the need for knowledge of its parent series.

So why is nobody talking about Tonegawa anymore? As I’ve outlined, the popularity of its parent series should’ve elevated it far beyond its seasonal competitors. Furthermore, the series is certainly worthy of praise – much like Kaiji – Ultimate Survivor, Mr. Tonegawa: Middle Management Blues is a shining example of its genre; in this case, the genre of comedy.

The problem comes down to what Kaiji fans want. Did we want an anime adaptation of two spinoff manga? Well, I’m sure that we wouldn’t say no if it was offered to us. But would we want this instead of a continuation of the anime, instead of Kaiji season three? Hell no.

Adapting spinoff manga might have been a good idea if Studio Madhouse had done this between proper Kaiji seasons for tangible scheduling and production benefits. It definitely wasn’t a good idea, however, to do this in the midst of an eight-year Kaiji drought – season two of the anime aired all the way back in 2011. 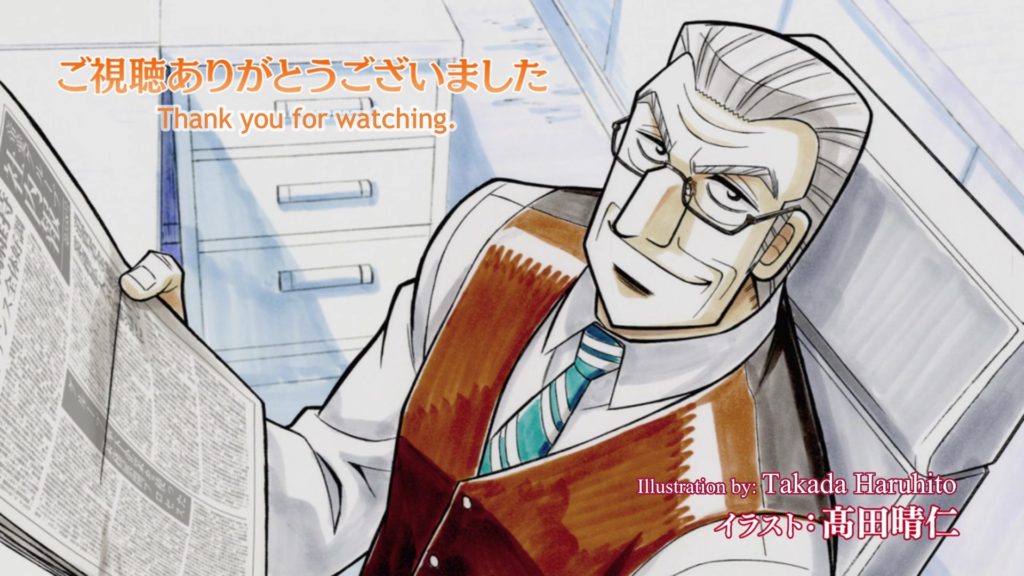 At the time of its announcement, I wondered if the Tonegawa adaptation was a way to gauge interest in another season of Kaiji. But nothing has been publicly stated to that effect from anyone who worked on the show, so that was simply wishful thinking on my part. Yet even if Madhouse did end up embarking on another season of Kaiji, they’re missing a very important person – Hideki Taniuchi.

Taniuchi was a Japanese composer who had a stellar couple of years composing excellent soundtracks for such anime as Death Note, another Fukumoto work in Mahjong Legend Akagi: The Genius Who Descended Into the Darkness, and then both seasons of Kaiji – Ultimate Survivor. Yet in 2012 – long before I ever even knew what Kaiji even was – Taniuchi was arrested and sent to prison for possession of marijuana.

Now, I have my own (strong) opinions on Japan’s outrageous drug policy, but I’ll save those for another time. The fact of the matter is that Kaiji’s soundtrack was one of the key elements that elevated the series to the classic it is considered today. I can scarcely imagine the show without such tracks as Beginning, Transparent, Wish, String of Light or Child’s Mind. That’s how important the soundtrack was for Kaiji.

But with Taniuchi in prison, he’s in no position to work on another season of Kaiji, or at least not until he’s released. Even then, it’s very possible that Taniuchi will feel too disgraced from his time in prison to feel comfortable enough to work again. Madhouse could certainly press on without him, but it just wouldn’t be the same.

So, I think it’s safe to say that Madhouse is caught in between a rock and a hard place. No one really wanted a Tonegawa anime – or even a Hancho one for that matter. The studio has unfortunately found out that, no matter how good a series may be, quality does not always equal demand. Mr. Tonegawa: Middle Management Blues may be a hilarious Kaiji spinoff, but that doesn’t mean that anybody wanted it.