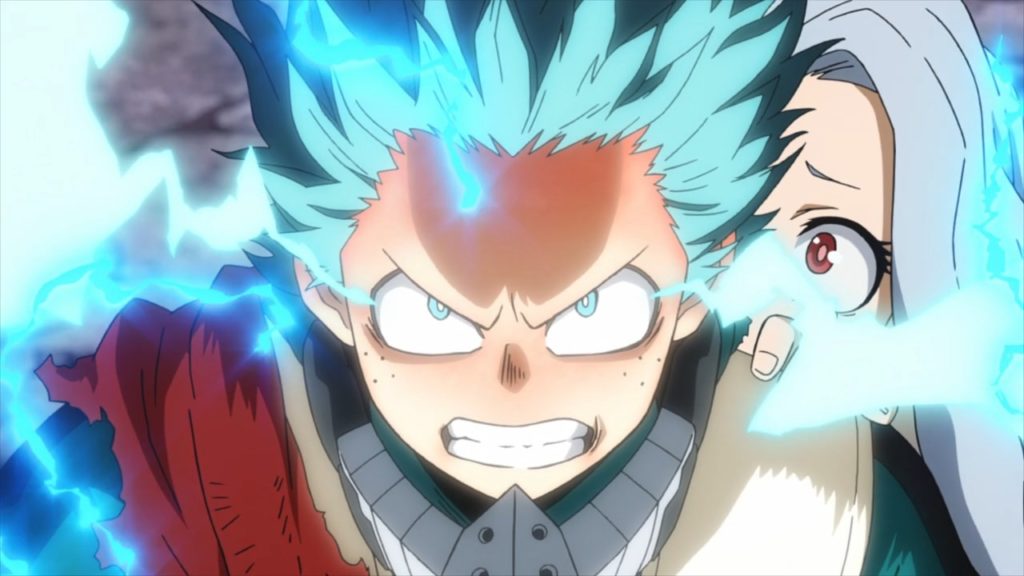 In last week’s episode, just when all seemed lost, Ryukyu and her team burst in to save the day. My Hero Academia 4 Episode 13 picks up a little before that, explaining how the Dragon Hero was alerted to the worrying situation underground before giving way to the epic final clash between Deku and Chisaki. It’s a fine way to cap off an arc that has had its fair share of ups and downs, most especially thanks to the work of the peerless Yutaka Nakamura.

In terms of adaptation and structure, this episode is relatively faithful to the original manga. It adapts the contents of chapters 156 through chapter 158 with little deviation, although it does make some effort to transform its contents into a form that works better in animation and on screen. Part of my thinking on this is influenced by Nick Creamer’s recent article on Crunchyroll, which explores the difficulties of translating Horikoshi’s paneling to screen, but most of my thoughts pertain to narrative and dialogue, as we will see.

Before the big battle between Deku and Overhaul can take place, My Hero Academia 4 Episode 13 has a bit of housekeeping to do. It needs to tell us how Ryukyu and her team knew where to bust in at the end of last week, complete Eri’s character arc, and get Deku and Overhaul to a more open space, thus allowing them to have one of the most gargantuan fights in the series thus far.

The answer to that first question, as it happens, is a little more interesting than you might think. Last time we saw Ryukyu and her team, they were dealing with one of Chisaki’s minions all the way back in episode 7. Following an altercation with him in this episode, the team is alerted by a figure resembling Deku as to the underground location of Chisaki and their need for backup. This leads to Ryukyu, Uravity, and Froppy breaking through the pavement, connecting the dots between the narratives of last week and this week. 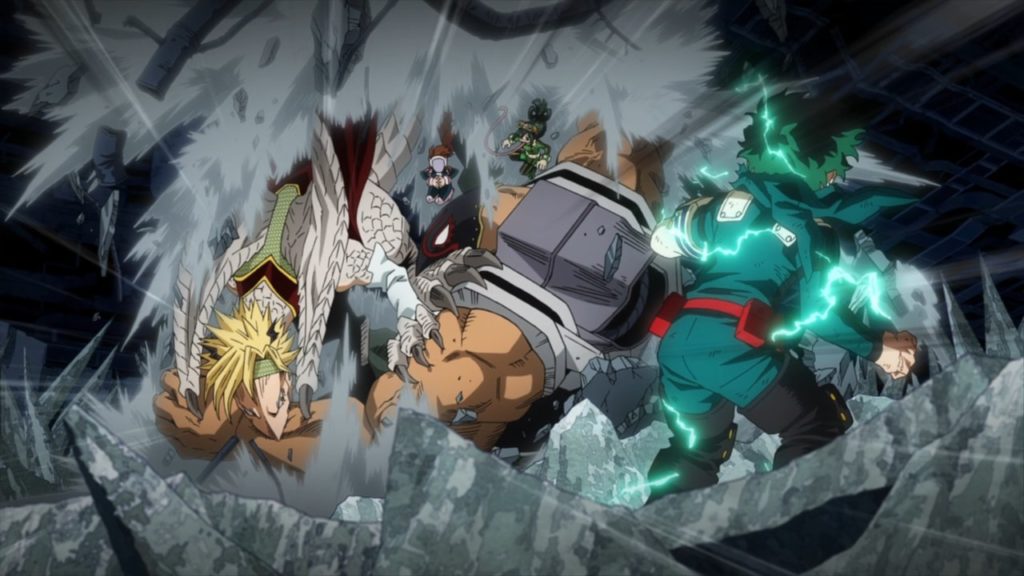 With any luck, however, the viewer should be a little taken aback by the sudden appearance of this ‘Deku.’ As far as we know, he should be stuck underground with the rest of Sir Nighteye’s team, fighting with Overhaul and his minions, and while it wouldn’t have been impossible for them to somehow make it out and call for backup, it seems like a bit of a leap of faith for My Hero Academia 4 Episode 13 to suddenly make it so.

Staying one step ahead, it should be obvious that this is yet more meddling from the League of Villains in the battle, Toga having disguised herself as Deku. Seeing your suspicions confirmed by the narrative (provided you were able to connect all of the dots) is no doubt satisfying, and creates even more intrigue as to the actual motivations of the League: what is there to gain from betraying the yakuza? What is Shigaraki’s objective in all of this? We’ll just have to wait and see.

Nevertheless, once My Hero Academia 4 Episode 13’s narrative has been opened up (quite literally), things start to move very quickly. Chisaki creates a platform and makes a break to the surface with Eri, but Deku follows in pursuit. Haunted by his past mistakes, he refuses to let the young girl slip from his grasp again – lest her suffering be exacerbated, and the sacrifice of Lemillion be for naught.

This motivation is made even more clear in a sequence that is largely anime-original, only taking from the original manga the basic premise of Deku making his way upwards, towards Eri through the falling rubble. From what it seems, the insert song that plays here is actually a remix of the iconic ‘You Say Run’ with added lyrics, and Deku and Eri’s inner monologues have been largely fabricated on the basis of the narration of the original manga, so as to avoid a cumbersome, direct manga-to-anime adaptation. 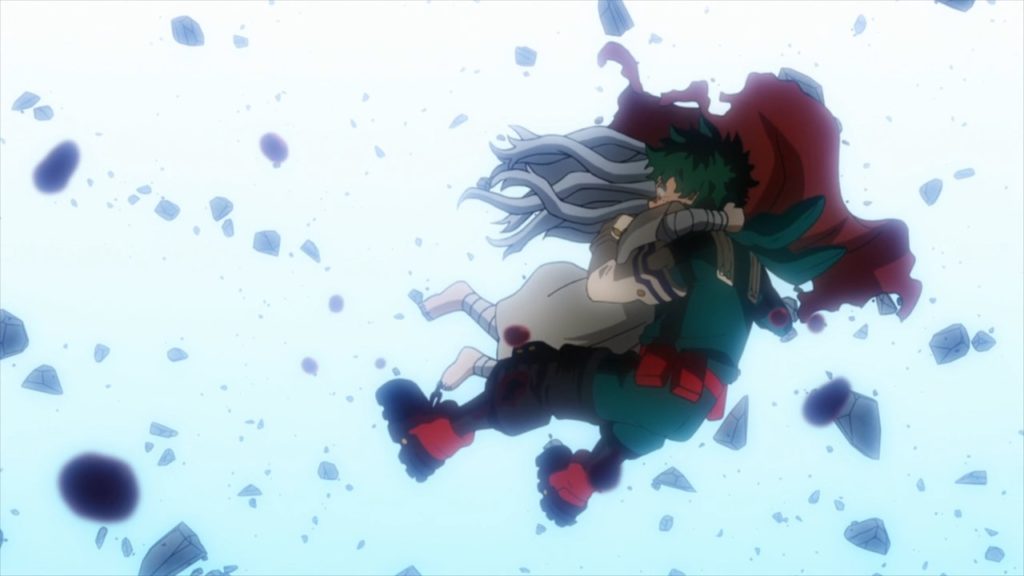 What makes this sequence so impressive is not just how it diverts from the original manga and makes the anime all the better for it, but also how it amplifies the meaning and imagery that did exist in Kohei Horikoshi’s original story, but never quite took center stage.

The image of Lemillion’s cape is a constant throughout this episode, acting as a reminder not just to Deku that his upperclassman sacrificed everything for the sake of this mission, but also to Eri that there are people out there that care about her and want to save her from misery. It is this realization, in turn, that pushes her to accept the help of the heroes and put her ‘Rewind’ Quirk to good use, allowing Deku to use 100% of One for All.

The Idea of Overhaul

Once all of this is out of the way, the true draw to My Hero Academia 4 Episode 13 can begin: the fight between Deku and Overhaul. But before we get to that, it is worth dwelling on Chisaki as a character for a moment, as this will certainly be the last time we ever see him.

One of the reasons why Chisaki is such a great villain and has remained so despite the series’ growing pantheon is – aside from his menacing aura, of course – relatability. The best villains are always those with whom we can empathize, if in a twisted way. We can see their logic, even if it is fundamentally flawed. In keeping with a Weekly Shonen Jump theme, think Freiza from Dragon Ball, or Hisoka from Hunter x Hunter. 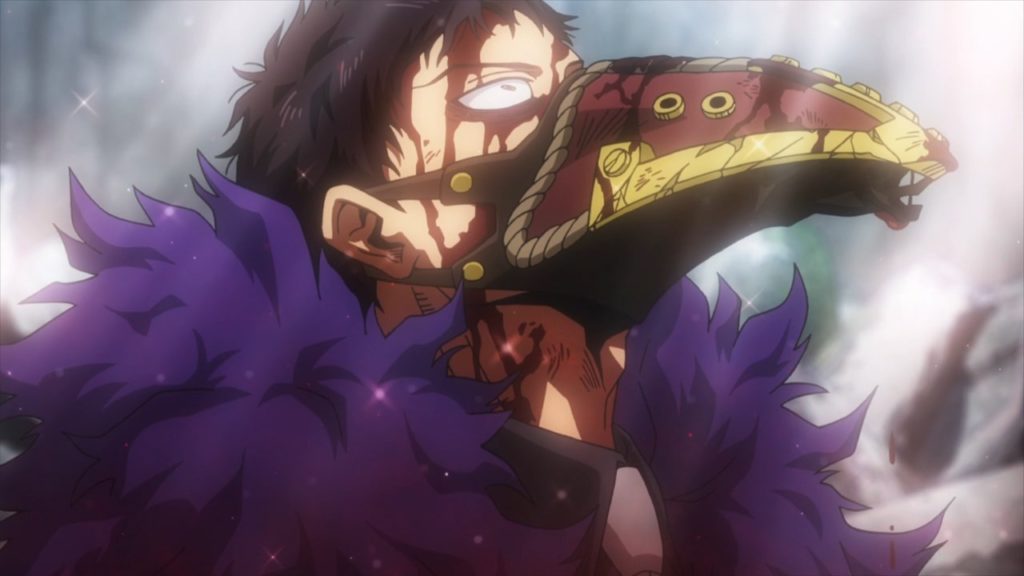 In this sense, Chisaki as Overhaul is a perfect example. As is revealed in My Hero Academia 4 Episode 13, he was saved from a life on the streets by the yakuza and thus feels an immense sense of duty to the organization that saved him. Yet, the superpowered world that the yakuza now inhabits is squeezing them out of existence, trapped between the growing power of not just the forces of good, but also the forces of evil. After all, what use is a gun against someone who can turn into a dragon?

Looking at it from this perspective, Chisaki’s decision to grasp the opportunity presented by Eri – fabricating anti-Quirk weapons to restore the ‘rightful’ balance of the world – is perfectly understandable. Furthermore, it is also through another flashback in My Hero Academia 4 Episode 13 that we get to see his brilliant business plan: sell the anti-Quirk weapons to the villains, while also selling the serum to the heroes. That’s a brilliant idea, if a diabolical one.

Nevertheless, I’d be worried if you completely empathize with Chisaki as it is, after all, a little girl’s life that he is using and abusing to achieve his master plan. The hero Deku is almost certainly in the right here – even if we can see where the villain is coming from.

In any case, the fight between Deku and Overhaul is pretty flashy and plenty full of excellent sakuga moments. While it doesn’t succeed in capturing the same sense of scale that exists in the original manga, which utilizes plenty of double-page spreads and splash pages to do so (see Nick Creamer’s article for more on that), it more than makes up for this in terms of animation. Of particular importance is Yutaka Nakamura’s fairly long contribution to My Hero Academia 4 Episode 13: thirty seconds of glorious fight animation from one of Studio BONES’ best and brightest.

By far my favorite part of the above cut is the moment where Overhaul looks up in fear at Deku, his face clouded in anger and determination. It gives a real sense of the overwhelming and awe-inspiring power of One for All at 100%, enabled by Eri’s ‘cursed’ Quirk. There’s also the final close up on Chisaki’s eye, which contrasts greatly with the much more expansive sequence that follows, his gargantuan form being disintegrated by Deku’s punch. Without a shadow of a doubt, it’s some of his best work yet.

It is also worth noting that Nakamura’s sequence in My Hero Academia 4 Episode 13 largely ignores the comparatively simple fight that is present in chapter 158 of the original manga. That’s not a bad thing, nor is it the only time in this episode that Studio BONES choose to divert from the original source material. Aside from a couple of scenes being shuffled around, there’s also the final scene between Sir Nighteye and Uraraka, which offers the former All Might sidekick some absolution in the face of his impending death as he sees Deku break through the future he foresaw, just like he promised. 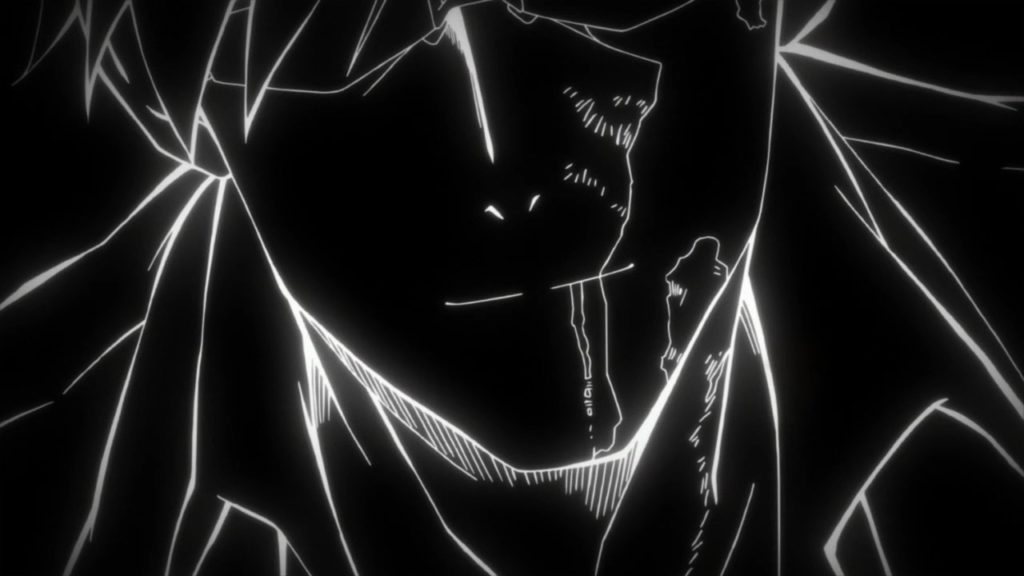 We’re not done quite yet, however. While this might feel like a pretty definitive end to the Shie Hassaikai Raid arc – Eri is saved, Overhaul is defeated, the raid itself is over – there’s still a little gas left in the tank. I won’t say specifics for fear of spoilers, but let’s just say that there’s still one more unstable element in the mix that has, up until this moment, yet to burst forth.

But the main meat of the Shie Hassaikai Raid arc is almost certainly over, with what is left to adapt being more of an epilogue than a continuation. It seems right, then, to take this opportunity to cast judgment on My Hero Academia 4 as a whole, not just on episode 13.

In general, I’d say that Studio BONES has done a pretty great job of adapting the original manga to screen. Their approach has more or less mirrored their excellent work on the previous three seasons, and there are even a couple of episodes that might end up going down as some of the series’ best yet.

Even so, a slow setup and issues with pacing made watching the series quite frustrating at the outset, which may end up diminishing its quality overall. Granted, now that the arc is more or less completed and all of the episodes are more or less out, binge-watching is a viable option. It’ll be interesting, therefore, to see how it all shakes out in retrospect and once fresh eyes have come across the material. In the meantime, let’s look forward to the School Festival arc!

You can watch My Hero Academia 4 Episode 13 via Crunchyroll.