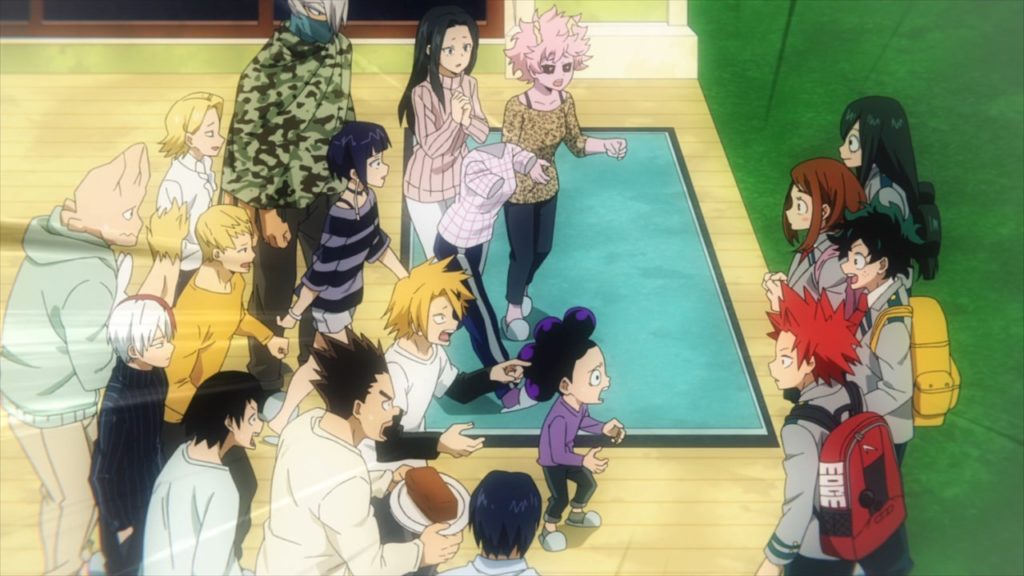 With the business concerning the Shie Hassaikai all wrapped up, our heroes make a triumphant return to U.A. high school in My Hero Academia 4 Episode 15, where they are greeted by their worried classmates. But two students, Bakugo and Todoroki, refrain from joining in the fun, heading off to bed early instead to ensure that they’re ready for their provisional license exam. Meanwhile, Gran Torino makes a gigantic discovery…

In terms of adaptation, this episode is perhaps the most direct of the season yet. It follows the events of chapters 162 and 163 almost to a fault, save for a few additional lines inserted in to make for better transitions. That’s not a lot of content, but the episode doesn’t suffer for it – rather, it feeds directly into the episode’s aim of reflecting on the journey thus far and reuniting us with some old friends.

After the breakneck speed at which the latter half of the Shie Hassaikai Raid arc just unfolded, there’s merit to slowing just a little bit to take stock of what just happened. Deku’s big flashback as he tries to fall asleep does this in the most direct way, coming as a condensed flashback reel, but there are also more important character beats that have come about as a result of the arc which are highlighted in this episode: his conversation with the energetic Mirio in the hospital helps to further absolve Deku’s imposter syndrome, and Ochacho’s quiet moment of reflection upon returning to the U.A. dormitory shows us how she is growing into a strong character in her own right.

Given that much of the last episode was taken up by the same sort of narrative reflection, you’d think that even more coming in My Hero Academia 4 Episode 15 would grind my gears. But it doesn’t – namely, because it makes sense in-universe, as various encounters prompt our heroes to reflect on their journey thus far. What’s more, is that we finally get to return home, to U.A. high school. 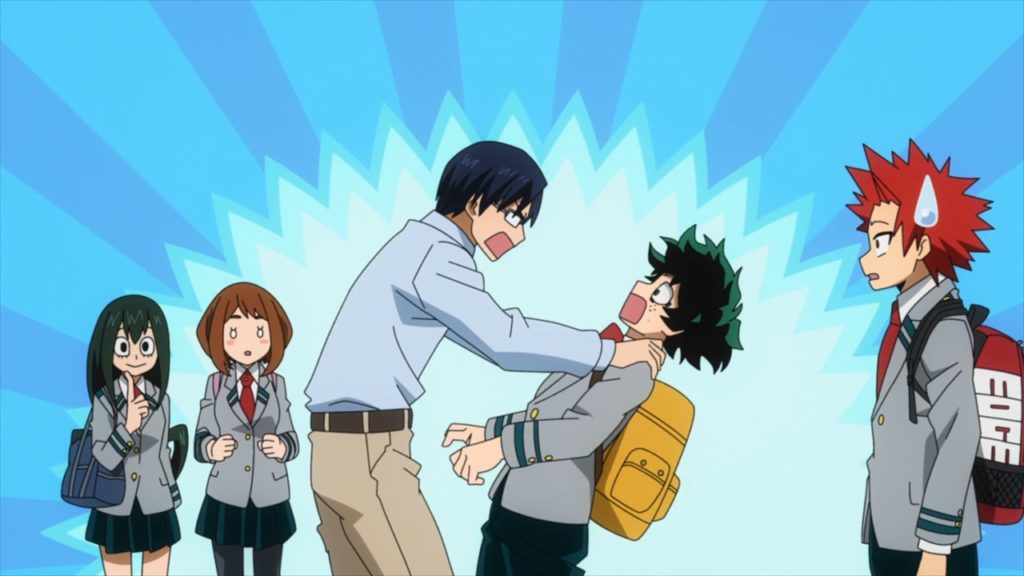 As the four pro hero interns say, it truly has been a while since we last visited the place where our story nominally takes place. Returning there really does feel great, as we get to see all of the characters that have been largely absent for the events of the last arc: Yaoyorozu, Iida, Tokoyami, even Mineta… It’s a testament to Horikoshi’s excellent character writing that returning to such a place really does feel like returning home after a long, long journey. Welcome home, heroes.

But My Hero Academia 4 Episode 15 isn’t entirely obsessed with the past. After the A part is done, in this sense, with reflection and reunification, the B part moves onto greener pastures: namely, Bakugo and Todoroki’s provisional license exam.

Yet, even before that, there’s an important scene that will not become relevant until much later on. I am, of course, talking about the scene between Gran Torino and Gigantomechia: a foe who will not reappear until much further down the road, in one of the manga’s best arcs thus far. There’s also the capture of Kurogiri, the repercussions of which are only being felt at this very moment in the manga. 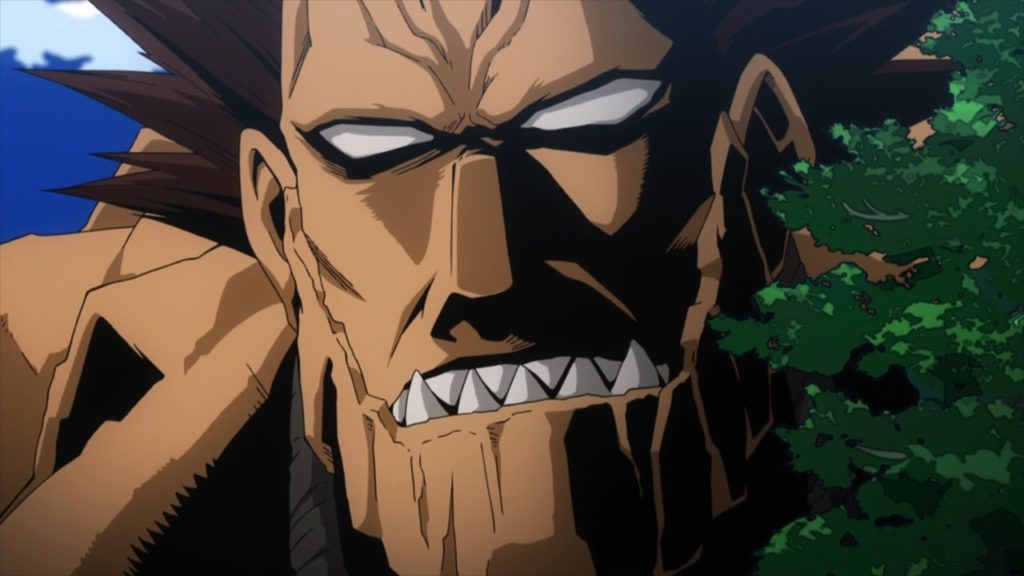 Clearly, there’s some heavy set-up going on here, but what about the immediate future? What about the next arc? With regards to that, it’s surprising to note that the U.A. school festival from which the School Festival arc takes its name, which this season will ostensibly cover, isn’t mentioned at all during this episode. While it is true that Studio BONES needs to get the Remedial Course mini-arc out of the way first, a throwaway line or two to better clue in the viewer as to the future wouldn’t have been amiss.

Nevertheless, things are set to move quite nicely into the next, smaller arc by the end of My Hero Academia 4 Episode 15. Bakugo and Todoroki meet with the Shiketsu students, the examiners deliberate on the difficulty of the exam this time around, and All Might and Endeavor sit down to have a friendly talk. This last event is particularly important as it more or less marks the moment where Horikoshi starts handing over the baton to the Flame Hero from the Symbol of Peace, given that the former has lost his powers.

Overall, there’s plenty to get excited about. Along with the warm feeling of returning to U.A., the way that this episode so deftly moves into the events of the next arc is the reason why, despite only covering two chapters of the original manga, this episode came across quite well. Let’s just hope that Studio BONES can keep up the good work going into the season’s second cour.

But, before we go, we should discuss the new opening and ending sequences that appear for the efirst time in My Hero Academia 4 Episode 15. We do, after all, only get this opportunity once every quarter. Shall we?

KANA-BOON’s ‘Star Maker’ certainly makes a strong impression. The band is already widely considered anisong royalty with such classics as ‘Silhouette’ and ‘Nandemo Nedari,’ and they certainly don’t disappoint here. The song’s easy-going atmosphere and light instrumentation matches perfectly with the laidback tone of the school festival visuals, as well as the visual implication that this is being played and written by Jiro at the very end. Nevertheless, this opening suffers from a lack of movement in much the same way as the previous cour’s opening, ‘Polaris’ by BLUE ENCOUNT. The problem is even worse this time around, however, as the sequence’s block color motif gives it a simple, almost childish veneer. So, just as long as you don’t pay too much attention to the fine details, you should be fine.

Making this problem a tad worse is the unexpected quality of the ending sequence. This isn’t down to Ryoku Oushoku SHAKAI’s ‘shout Baby,’ which is a far cry from the previous cour’s ‘Koukai no Uta’ by Sayuri in terms of atmosphere and emotion as an ending song, but the interesting visual theme that Studio BONES has chosen to underpin it: taking the the ‘school festival’ theme and running with it, the studio has chosen to display photos of various characters at their own school festivals, as well as graduation and induction ceremonies. 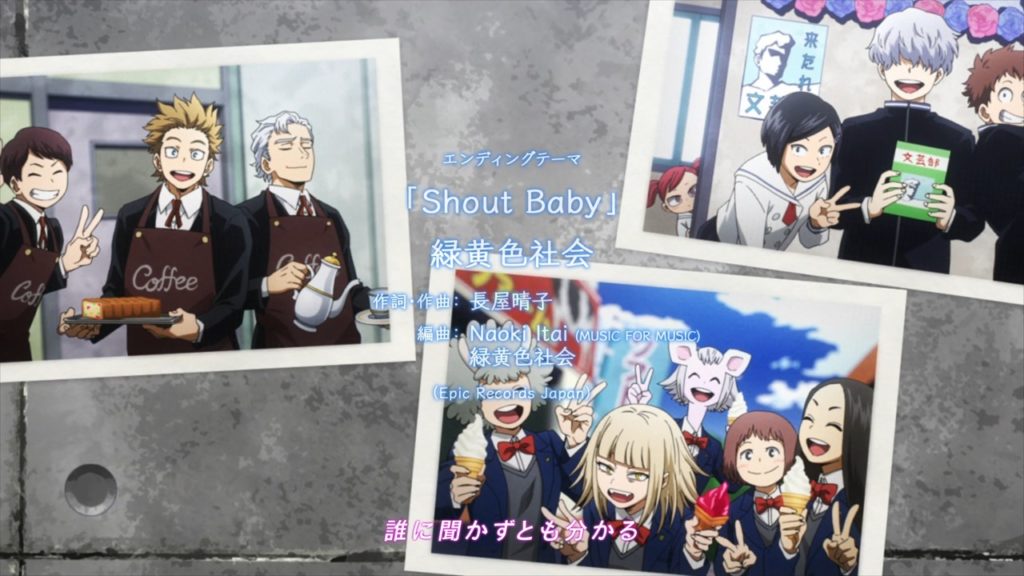 These photos function as interesting snippets of anime-original content, especially as we get to see villains like Toga and Gentle Criminal in their school days. Seeing All Might winning the sports festival, in turn, is enough to make your heart go a-flutter. So, even if the opening might leave you slightly frustrated, you can always count on the ending to leave off on a high note.

You can watch My Hero Academia 4 Episode 15 via Crunchyroll.