My Hero Academia 4 Episode 16 Review: The Kids Are Alright 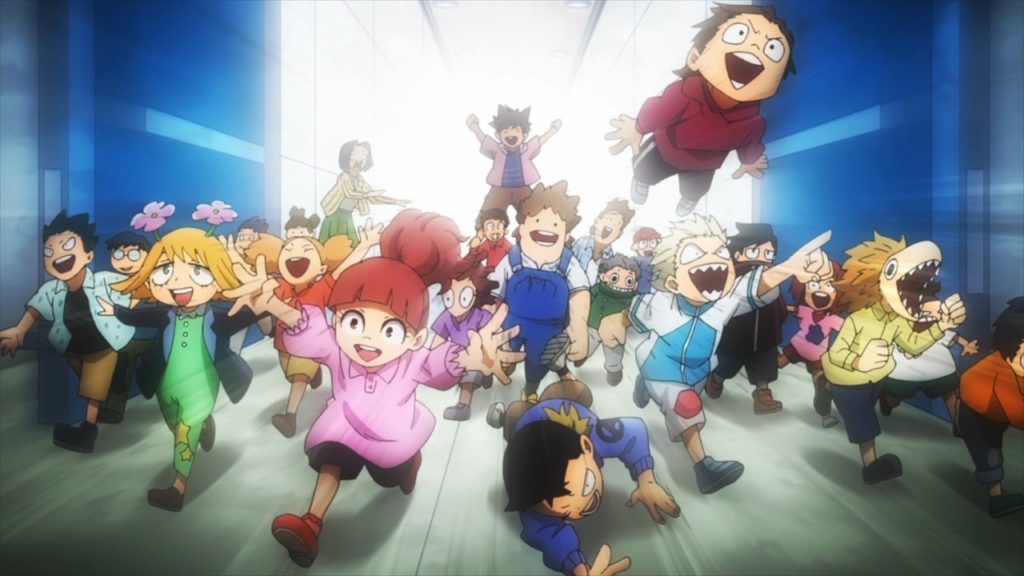 Bakugo and Todoroki face an unusual trial in this week’s My Hero Academia 4 Episode 16 as they take on their remedial course and attempt to obtain their pro hero licenses: subdue a bunch of grade-schoolers, none of which are very friendly. Meanwhile, All Might and Endeavour have a serious conversation about the concept of the Symbol of Peace and the growing darkness that threatens to engulf the hero world…

In terms of adaptation, this episode is similar to last week’s in that it is more or less a one-to-one adaptation of the original manga. After opening with a short scene from the end of last week’s episode, it dives headfirst into the contents of chapters 164 through 165, finishing with a few pages from chapter 166. While it is, in this sense, a fairly uninteresting adaptation, that doesn’t take away from the overall quality of the episode, as we’ll see.

Before we dive into the main thrust of My Hero Academia 4 Episode 16, it may be worth refreshing our memories as to exactly why Todoroki, Bakugo, and the Shiketsu students didn’t manage to obtain their provisional hero licenses along with everyone else.

If you cast your mind back to the second half of season three, you’ll remember that the rest of Class 1-A managed to get their provisional hero licenses (which is why Deku was able to intern at Sir Nighteye’s hero agency) but that Bakugo, Todoroki, Isana, and Kamui all failed. In Kamui’s case, this was because she had been kidnapped so that Toga could infiltrate the exam using her likeness, but the other three simply didn’t meet the requirements. 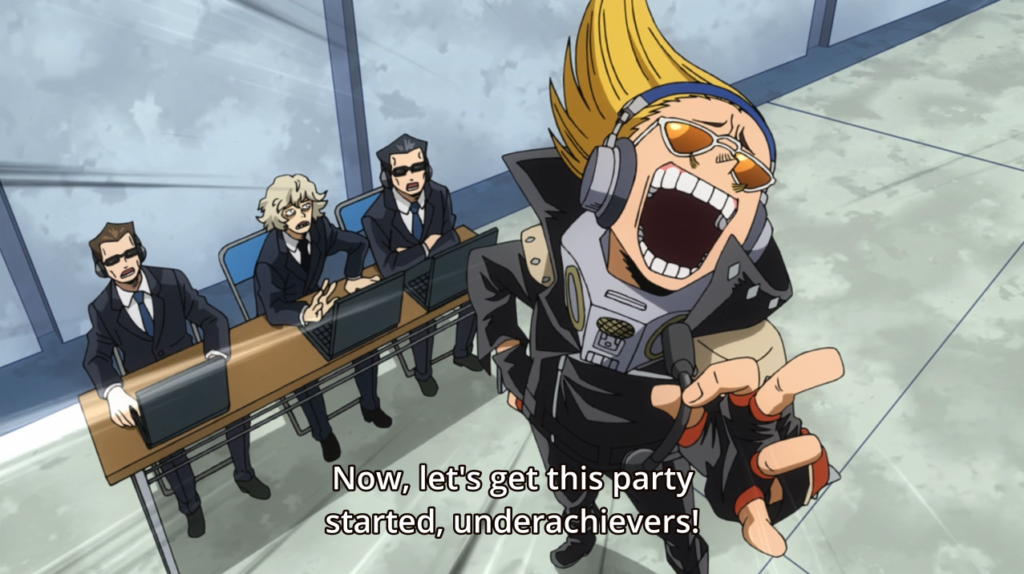 Putting Todoroki and Bakguo through the remedial course, then, is a narrative loose end that has been left hanging for some time, which is why I wouldn’t consider this arc ‘filler’ as some have said: it’s doing vital narrative work for the future of the series. It is true, however, that Horikoshi could’ve made these events play out off-screen and instead focus on the larger story at hand, so there is a need to make these events as entertainingly worthwhile as possible.

I’ll be honest and admit that I don’t remember much of this arc from when I read it in the original manga. Part of this was because it was so long ago, but there’s also the fact that it was being published when I first started reading Weekly Shonen Jump while I was in Japan, and at that time my Japanese wasn’t so good, so it’s possible that I understood very little apart from what was being communicated visually through the panel illustrations. Hence, you should take my indignation at My Hero Academia 4 Episode 16 being as entertaining as it was with a pinch of salt.

One of the main reasons why this episode was so fun was its cast of characters. Seeing Todoroki and Bakugo back in action after so long out of the limelight is, of course, a joy, but several of the newer and less established characters impressed me even more: namely, the weary examiner Mera, the drill sergeant Gang Orca, and the slang-obsessed Kamui, all of whom made me laugh at some point during this episode.

It’s also nice, after the string of intense battles that was the second half of the Shie Hassaikai Raid arc, to have a conflict that’s not based around physical acumen. The task of our heroes this week is not to defeat an enemy, but to ‘win the hearts’ of a bunch of unruly grade-schoolers, who have no interest in respecting any adults or any heroes. How each character deals with the task at hand also functions as brilliant character moments: Bakugo goes straight in for the authoritarian approach, Inasa tries to get on their level, Todoroki gives his backstory, and Kamui tries to mother them. None of them succeed, but each moment still has merit as little snippets of character and personality. 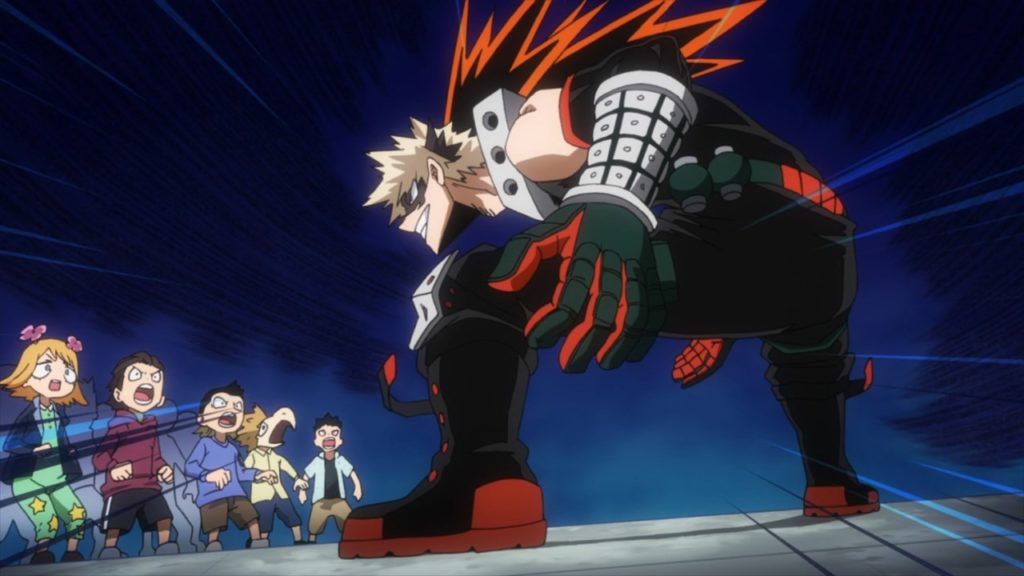 There’s also an interesting bit of world-building from the teacher of the unruly class, who talks about the nature of education and childhood development in a Quirk-filled world. Since the majority of the population is now born with special powers, there’s even more tension between kids than ever before, and therefore a large amount of counseling is needed. But some kids are just never going to listen to authority, and the addition of Quirks only makes this worse: now they have physical power over their teachers in a way that was never a problem in the past. Further, the kids’ faith in authority and heroes has been shaken by the increasingly chaotic society that they live in after the fall of the Symbol of Peace – something which dominated the second part of the episode, as we’ll see.

All of these things are what made My Hero Academia 4 Episode 16 surprisingly great, and you can’t give much credit to Studio BONES for this achievement: this is largely a one-to-one adaptation of the original manga, after all. Even so, there were two key moments that stood out to me on an adaptational basis: the first, how the music builds up and then cuts to the title card of the episode when the kids first pour in, and the addition of a line for Inasa that more distinctly references the fact that Endeavor is now considered the number 1 hero.

What is the Symbol of Peace?

Given that Endeavor will not formally become the number 1 hero until later on, during an extravagant ceremony in which Hawks will also be properly introduced, the addition of this line is fairly conspicuous. It also leads quite nicely into the second important part of this episode: a conversation between Endeavour and All Might about the concept of the Symbol of Peace, and where the hero world might be going from here on out.

All Might and Endeavor have never enjoyed a friendly relationship, with the former always seeing the latter as his eternal rival. But now that All Might has lost his Quirk and retired the mantle of the Symbol of Peace, there’s a need to put their differences aside and figure out how best to proceed, especially in a society where crime is on the rise and uncertainty about the future is widespread. 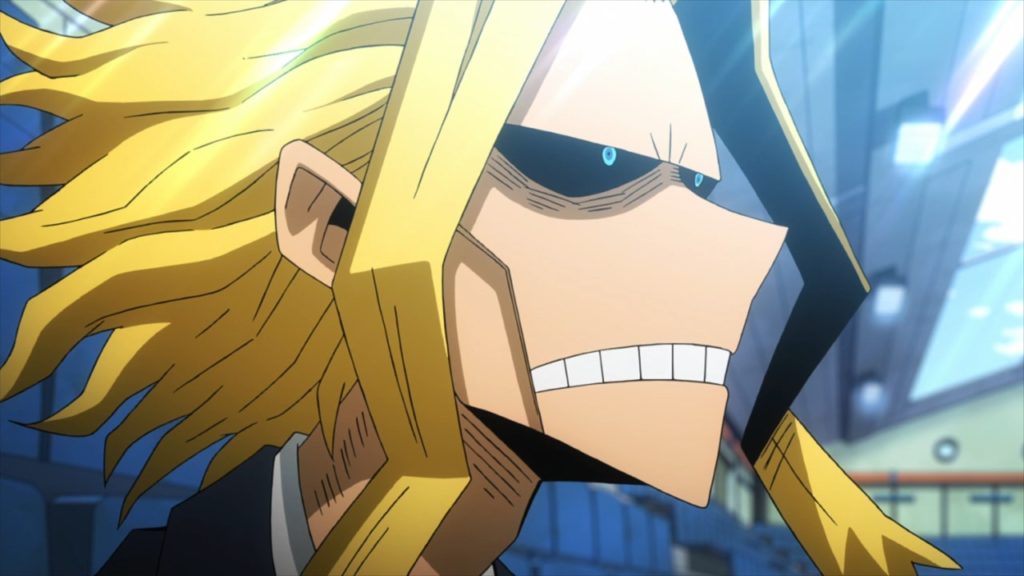 The net result of this conversation is that All Might makes clear that Endeavor, with his abrasive and aggressive personality, isn’t suited to the role of Symbol of Peace in the same way that All Might was. Nevertheless, there is a need for him to step up to the plate and proceed in his own way, even if it will never be as all-encompassing as All Might’s approach, given the vacuum opened up by his retirement.

This may sound like a fairly banal conclusion for the age-old conflict between the two rivals, but the importance of this development will become apparent later on when Endeavor begins to think about how he can be a better hero and a better person in general, which leads into the Pro Hero Arc. I doubt that that’ll be covered this season, especially considering the slow pacing, but rest assured that all is not for naught.

My Hero Academia 4 Episode 16: The Kids are Alright

Overall, My Hero Academia 4 Episode 16 surprised me. While my memory of the Remedial Course arc was shaky at best, the excellent characters and character work in this episode, along with its subtle worldbuilding, did much to keep me entertained and enjoying myself. The short segment between All Might and Endeavor, too, is enough to get me excited about the future and what the series has in store for us. Maybe the kids really are alright.

You can watch My Hero Academia 4 Episode 16 via Crunchyroll.