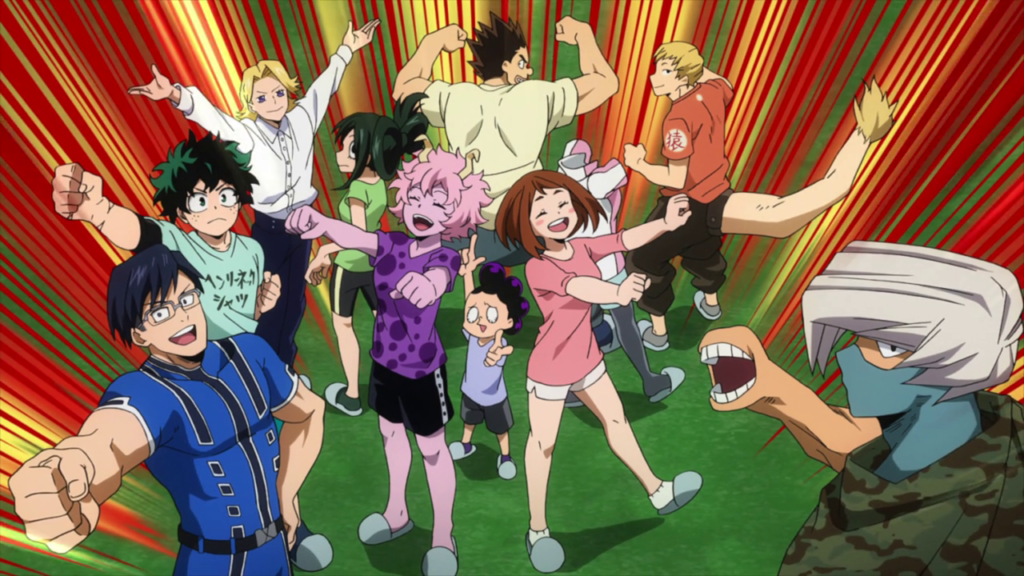 After having decided to get their rock on for this year’s U.A. School Festival, Class 1-A get down to brass tacks in My Hero Academia 4 episode 19 and plan out what exactly they’re going to do. Along the way, we’ll discover some of our characters’ surprising hidden talents and spend some quality time together after so many episodes apart. But evil is lurking not far behind, and our heroes’ latest foe may be their most fabulous yet…

In terms of adaptation, this episode follows chapters 171 through 172 in a more-or-less direct fashion. That’s a phrase I’m almost getting tired of saying every week, but it deserves to be said – especially in comparison with the more transformative last arc. In any case, there are some deviations from the source material as well as some creative decisions which push it in one way or another, so it’s clear that Studio BONES are continuing to keep a close eye on how they go about their adaptation. All in all, it’s a fine episode that does much to inspire confidence going forward.

One of the main things that My Hero Academia 4 episode 19 gets going is the preparation for Class 1-A’s contribution to the School Festival. It was already decided last week that they were going to do some sort of live performance, but this week requires them to work out the specifics: what will they need, who is going to be in what team, which kind of music will they play, etc. etc.

All of this has surprisingly emotional consequences. As it turns out, some of our heroes have surprising hidden musical talents: Bakugo is a dab hand at the drums, Tokoyami is a moody guitar player, and Jiro has astonishing vocal abilities. These first and last two are the most important as they have the farthest-reaching emotional impact. Bakugo’s willingness to step up to the plate and ‘kill U.A. with sound’ is, as Todoroki notes, his way of dealing with the pressure that he and his peers have been under due to repeated run-ins with the League of Villains, as well as how this ostracizes them from the wider student body. Jiro, too, is starting to finally come out of her shell, blowing everyone away with her tremendous singing talent after persistent prodding from her friends. It’s a small step, but a significant one nevertheless. 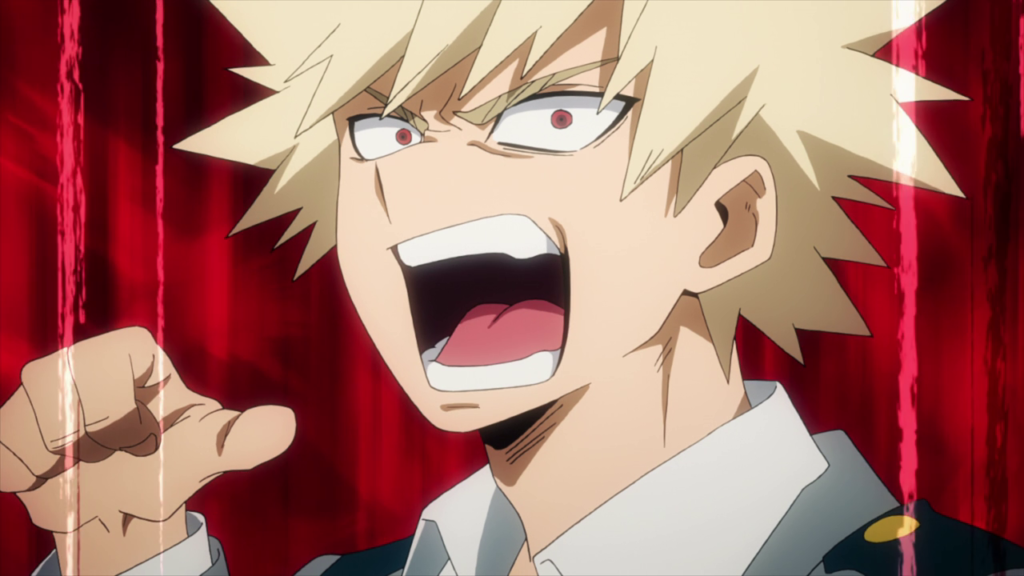 Jiro’s singing voice is of particular importance as it bodes good tidings for the rest of the arc to come. I have no concrete confirmation of this, but I highly doubt that Jiro’s Japanese voice actor (Kei Shindou) provided the vocal performance for this segment, as the pronunciation seems too good for what we’ve become accustomed to in anime. Singing duties could have been passed over to her English voice actor, Trina Nishimura, but I don’t, again, have any concrete confirmation of this.

Regardless of who voiced who, what’s important here is that Studio BONES is paying close attention to how the music of this arc sounds. This comes in the form of both diegetic, in-universe sounds – such as Jiro’s singing, Bakugo’s drumming, and Tokoyami’s strumming – as well as the soundtrack, composed by Yuki Hayashi. It must be said that Hayashi seems to be having a lot of fun in My Hero Academia 4 episode 19, crafting several new themes and compositions, including the incredible Gentle Criminal theme, which we’ll discuss a little later on.

Given that so much of this arc’s identity is wrapped up with music, as well as the fact that its climax will take a distinctly musical form, My Hero Academia 4 episode 19 fills me with confidence that the studio will be delivering a stellar adaptation that does good by the potential of the source material. Rock on!

But our heroes aren’t going to be left to enjoy their school festival in peace. I mean, if they were, then there wouldn’t be much of a story, would there?

Gentle Criminal and La Brava, introduced at the end of last week’s episode, also take up a large portion of this episode as they plan their next dastardly caper – infiltrating the U.A. School Festival. So much of what made their brief appearance last week so compelling carries over to My Hero Academia 4 episode 19: magnetic personalities delivered through fantastic voice acting and the online video format, but special attention needs to be given to Yuki Hayashi’s Gentle Criminal theme, which makes its first appearance this week and does so much of the heavy lifting this time around – especially as so much of the duo’s screen time is dominated by exposition and explanation. This is a reference that will no doubt be lost on some people, but it sounds a lot like Mike Morasky’s work on the Team Fortress 2 soundtrack. Those who know will know, but those who don’t just need to know that that’s not a bad thing. Far from it: it’s a shining endorsement. 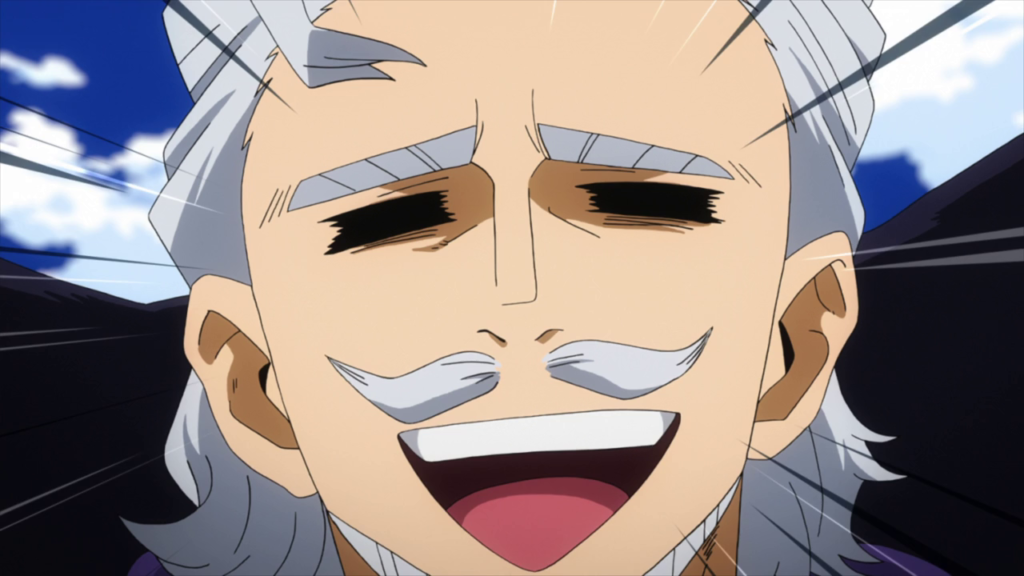 One of the only things that potentially drags down the wonderful appearances of Gentle Criminal and La Brava is the production quality. There are several moments where their character designs appear off-model, especially when compared side-by-side with their manga counterparts. This doesn’t appear to be a problem for the rest of the episode, which makes me think that it is their more complicated designs, along with the fact that this is new material for the animators, which makes them particularly difficult to keep consistent.

Then again, the amount of effort that the animators have put into their scenes – particularly to the depiction of La Brava, who almost never stops moving in excitement – is obvious and makes clear that this isn’t a case of creative leniency or corner-cutting. Perhaps, as time passes and these designs become more and more cemented in the production, things will improve. We can only hope.

Speaking of improvement, Deku is also making incremental improvements in controlling All for One. A small segment at the end of My Hero Academia 4 episode 19 between All Might and his successor gives him another tool in his super-powered arsenal: having already managed to use 20% of his power during the battle with Chisaki, he’s now able to channel that ability into one of his fingers, thus creating blasts of air pressure like All Might when he flicks it. This acts as an interesting parallel with Deku’s fighting style at the beginning of the series, as he uses that same principle but now in a much more controlled and less destructive way.

It’s a good job that Deku is proceeding in his mastery of All for One, as Gentle Criminal and La Brava are also gearing up to wreak havoc at the U.A. School Festival just as Class 1-A are gearing up to blow it away. You don’t have to be a genius to figure out that these three characters are on a collision course with one another, and all I’ll say is that their clash will certainly not leave you disappointed.

The way that this scene sets up the future conflict between Deku, Gentle Criminal and La Brava isn’t the only reason why I decided to include it in this week’s review. What’s also interesting about this scene is how it manages to deliver exposition in a very engaging way, both through excellent vocal performances from Daiki Yamashita and Kenta Miyake but also through animation and visual direction. The way that the camera focuses on Deku’s eyes and whirls around his furrowed brow goes a long way in making what is essentially just narrative justification for a new superpower into something visually engaging and exciting to look at. I just wish that all such sequences in anime were rendered as such. 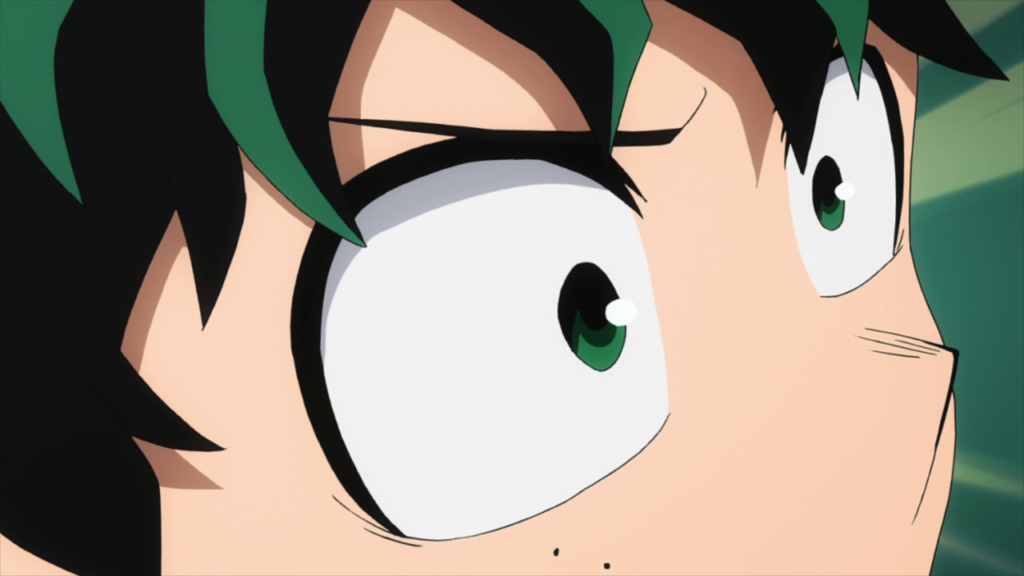 This isn’t the only adaptational flourish that Studio BONES makes in My Hero Academia 4 episode 19, either. Although this episode is more or less a one-to-one adaptation, the addition of music in the scene where Bakugo agrees to play the drums gives it a much more emotional edge than the scene had in the original manga, and the scene where Aoyama express his approval of the idea of becoming a disco ball is transformed from a tiny illustration in the original manga to a gut-bustlingly funny beat in the anime, complete with a metaphorical record-scratch moment.

There’s also the omission made of an exchange between the teachers from chapter 171, so it’s clear that while this episode may be more direct than others this season, that doesn’t mean that Studio BONES aren’t keeping an eye out for moments where additions and removals may help the overall flow and pacing of the story in adaptation. When taken alongside all of the ways that the studio delivers on the potential of this story – crafting a musical identity for our heroes as well as cementing the presence of our villains – it’s clear that My Hero Academia 4 episode 19 isn’t one to miss.

You can watch My Hero Academia 4 episode 19 via Crunchyroll.