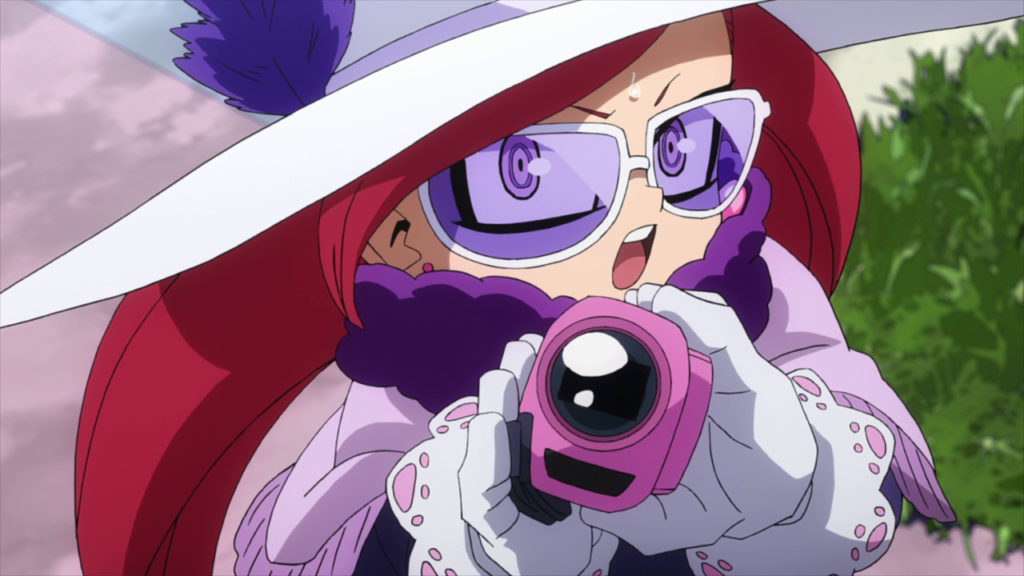 Heroes and villains collide in this week’s My Hero Academia 4 Episode 21 as a chance encounter sees Deku foiling Gentle Criminal’s perfect infiltration plans. Very soon fists start to fly, but as the timer ticks down to the start of Class 1-A’s performance, the question remains: will Deku be able to make it back it time? Or will he end up breaking his promise to Eri?

In terms of adaptation, this episode is yet another direct adaptation of chapters 175 through 176. Even so, there are several interesting elements that Studio BONES brings to the table in terms of editing, along with some fantastic animation that proves how well the team has managed the production scheduling over the course of this season. Far from dropping the ball, the team has managed to hit a home run.

Before Deku and Gentle Criminal can duke it out proper, My Hero Academia 4 Episode 21 has some setting up to do. It was already clear from last week’s episode that our heroes and villains were on a collision course, but this week makes it even more obvious.

Part of this is hard to quantify given that I have already read the original manga, but even anime-only viewers will surely watch the scene where Deku explains how he is going to go and buy some new rope for the performance to make it back in time and then let out an audible ‘Oh no!’ when it is revealed that he is heading to the hardware store right next to the café where Gentle Criminal and La Brava are planning to take their pre-infiltration cup of Gold Tips Imperial. Even if you’re half-asleep, you won’t miss the significance of that.

Having established how our heroes and villains are going to collide, My Hero Academia 4 Episode 21 then does some good work explaining why we should care about this fight in the first place. Hatsume, once again barging in on All Might and Deku’s early morning training session, delivers to the young hero the new set of gloves that he commissioned last week, allowing him to use his air projectile abilities much more easily and reliably. This will go a long way in shoring up the dramatic gravitas of the fight, as we shall see. 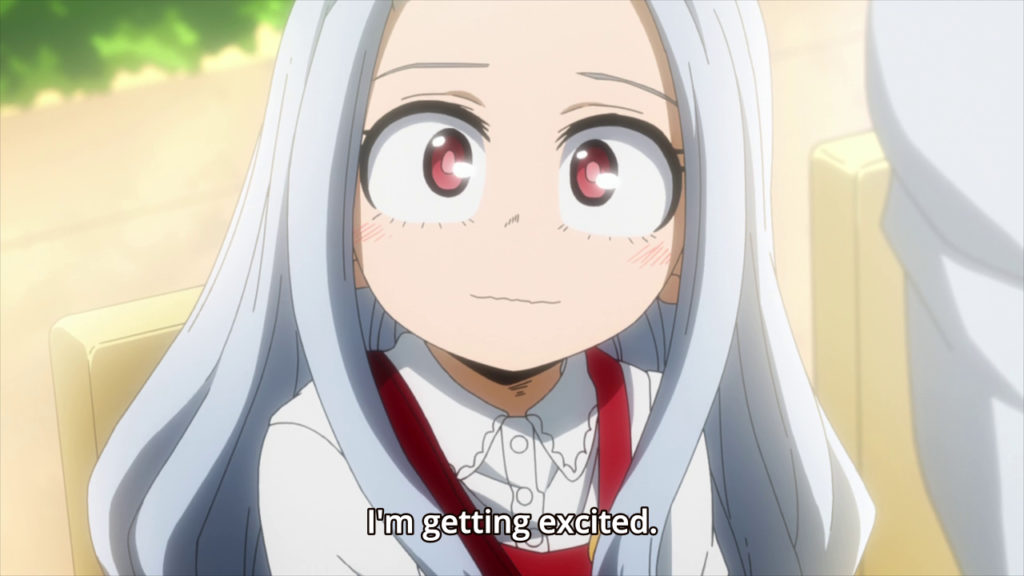 Yet, there’s also an emotional side to this fight that should be properly considered. My Hero Academia 4 Episode 21 gives us a brief flashback to the events of last week, when Eri visited U.A., and makes it crystal clear that she is looking forward to the festival and to Deku’s performance in particular. If anyone were thus to come in the way of this – say, a fabulous vlogging supervillain with a fantastic mustache – then there will be hell to pay from Deku, who feels personally responsible for Eri and her wellbeing after his failures during the Shie Hassaikai Raid arc.

Before heading into the fight proper, however, we should dwell for a moment on what the rest of Class 1-A is up to. We won’t get many other opportunities to do so going forward. In general, preparations for the performance are proceeding swimmingly, with figures such as Ashido and Jiro really stepping up to the plate in terms of organization and leadership. Yet the scene where the Band Team are working on perfecting their music, in particular, is brimming with personality (mostly thanks to Bakugo’s amusing comments) and helps to shore up the idea that these characters are so strong that they could be doing anything and we would probably enjoy watching them. All credit has to go to Kohei Horikoshi for that one.

With all of the dominoes now set up, all that’s left for My Hero Academia 4 Episode 21 to do is knock them down. Yet, it doesn’t do this straight away – instead, it does this slowly, first cranking up the tension as Deku and Gentle Criminal just happen to cross paths outside of the hardware store. An errant line about Golden Tips Imperial sparks a conversation, which Gentle can’t help but engage with given his unique idiosyncrasies. It is through this conversation that the cogs begin to turn in Deku’s mind, slowly remembering the video that he watched last week and how drinking tea is some kind of ritual for the extravagant villain.

By the time he fully realizes, he’s absolutely furious – just one intruder on the U.A. campus will put an end to the school festival for good, which would mean that he’d have to break his promise to Eri. This isn’t something that he can take in good conscience, and the look that he shoots Gentle at the end is genuinely scary – also harking back to a similar look at the end of the Overhaul fight that shows just how terrifying the young hero and his Quirk can be. Needless to say, Gentle has his work cut out for him if he wants to get past the obstinate hero and continue to shore up his legend.

Speaking of Quirks, once the fists start flying, My Hero Academia 4 Episode 21 gives us our first taste as to what Gentle’s Quirk actually is. You’ll recall that, back when he was first introduced, the footage cut just as he began to use his abilities – so it is with some trepidation that we finally learn what it is: ‘Elasticity.’ 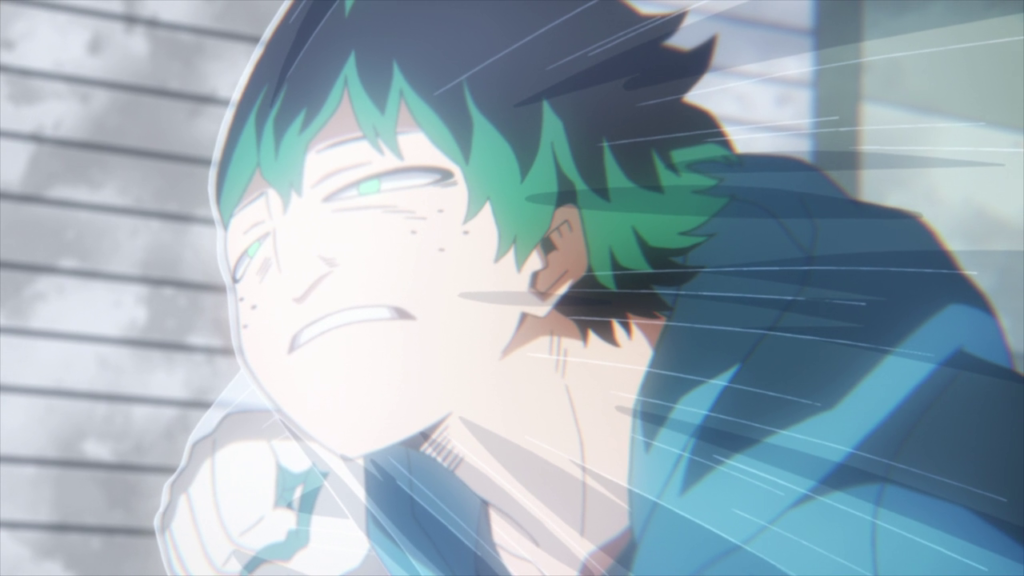 The genius of this ability cannot be understated. Firstly, it fits in perfectly with the villain’s personality – as relayed in a remark to La Brava, Gentle detests violence and his Quirk thus allows him to fight without actually using his hands or fists. Call it cowardice, but he’d just call it being gentlemanly.

Secondly, Gentle’s Quirk allows for a fight that is a lot more engaging than anything we’ve seen in this past season. While that’s not to say that any of the numerous previous fights were boring (anything but), the simple nature of the villain’s Quirk allows the viewer to parse much easier the flow of the fight and strategize alongside Deku as a result – a far cry from the more esoteric set of abilities possessed by, say, Chisaki.

If we continue to compare this fight with the others that we’ve seen this season, then it is clear that the fight’s setting is also key in allowing for a more engaging set piece. Taking place on a high-rise construction site, My Hero Academia 4 Episode 21 not only clearly defines its battle arena but also makes keen use of it: the steel girders are a fantastic way to show off Gentle’s Quirk and serve as a fantastic climax to the action in both a physical and emotional sense.

To explain that last point, we need to discuss the new elements to Deku’s Quirk that are also explored in My Hero Academia 4 Episode 21. These developments mostly come about thanks to Hatsume’s new gloves, but that would be undervaluing the amount of training and time that the young hero has been putting into perfecting his projectile attacks since episode 19. Without the gloves there would be nothing to show from the training, and vice versa.

By using One for All at 20% in one part of his body (in this case, his fingers), Deku can bring forth a massive burst of air pressure that, if channeled, can be shot out like a bullet made of air. During the fight with Gentle, he uses this new ability to devastating effect: he manages to shoot him and La Brava out of the sky not once, but two times. Clearly, this new addition to his superpowered arsenal is going to be very effective going forward.

Even so, Deku wouldn’t have been able to use this ability without the experiences he’s had during the run-up to the school festival. If you thought that the two sides of the arc – preparing for the festival and fighting Gentle – felt a little disjointed, then here they finally come together: Ashido’s strict dance training echoes in Deku’s head as he readies his fingers for the projectile attack, learning to focus his attention for just one single moment. Boogying has its purposes, I suppose. 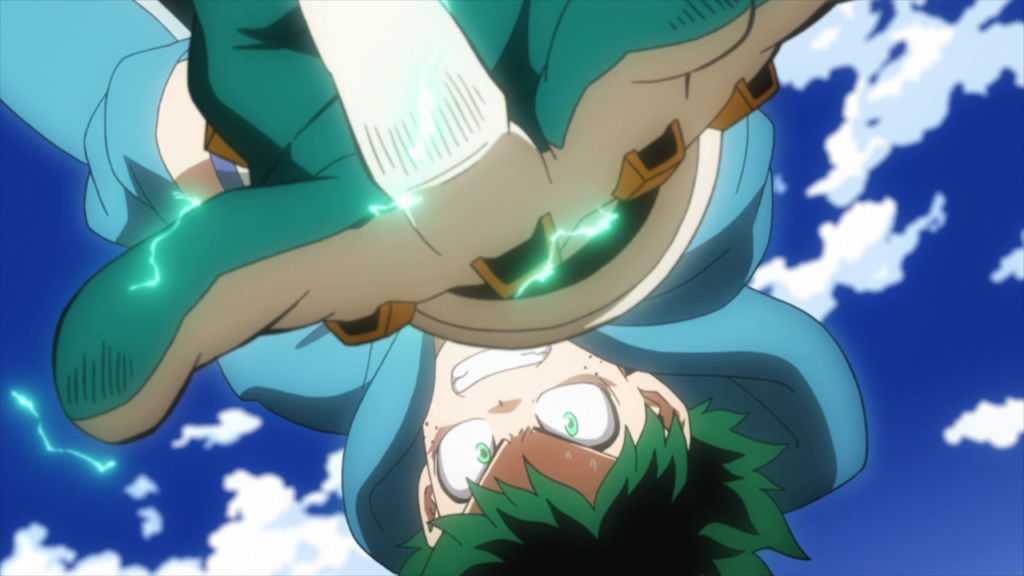 Deku’s promise to Eri, too, rings in his mind as he struggles in the climactic moments of the clash to hold up a steel girder and prevent it from crushing a civilian. Already, his feathers are thoroughly ruffled as Gentle essentially abuses his heroic convictions for his own ends – he had no intention of letting it crush the civilian in the first place – but the thought of letting Gentle get away and possibly put a stop to the U.A. school festival is enough to make his muster up the conviction to hoist the girder above his head and ready a projectile blast at the same time; an incredible feat of strength and conviction that shows just how far we’ve come from the days of the sniveling crybaby of old.

We don’t have much more time to bask in nostalgia, though, and neither does Deku: the clock is literally ticking in My Hero Academia 4 Episode 21 as every second that he spends duking it out with Gentle is another second closer to the beginning of Class 1-A’s performance. There’s thus a dual burden pressing down on the young hero’s shoulders: defeat Gentle, for one, but also do it in time. Failing either one of these objectives would mean breaking his promise to Eri, which he definitely cannot let happen.

A sense of urgency is therefore palpable in My Hero Academia 4 Episode 21, which is rendered beautifully by the way that Studio BONES edit in the visual and sonic aspects of a timer at multiple points throughout this episode. The jump-up in production quality in this episode is also quite obvious to see: not only is the general quality of the artwork much more consistent, but there’s also some great animation in here – the bouncing girders and Gentle’s flailing arms as he can’t help but make conversation with Deku about tea, to name but a few. 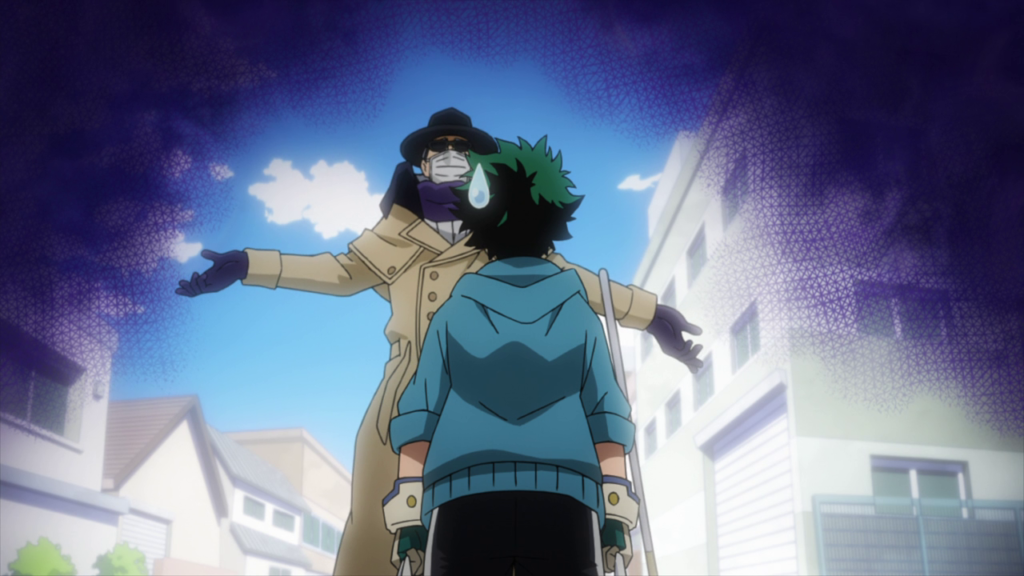 To continue with the domino metaphor, it would have been quite understandable if Studio BONES were caught flat-footed by the domino effect of the rate at which things have fallen. We are 21 episodes and almost half a year into a two-cour production, after all, but instead of dropping the ball the team have managed to pick up the bat and strike a home run – getting the Gentle Criminal fight off to a fantastic start that has me barely able to wait until next week for more.

You can watch My Hero Academia 4 Episode 21 via Crunchyroll.