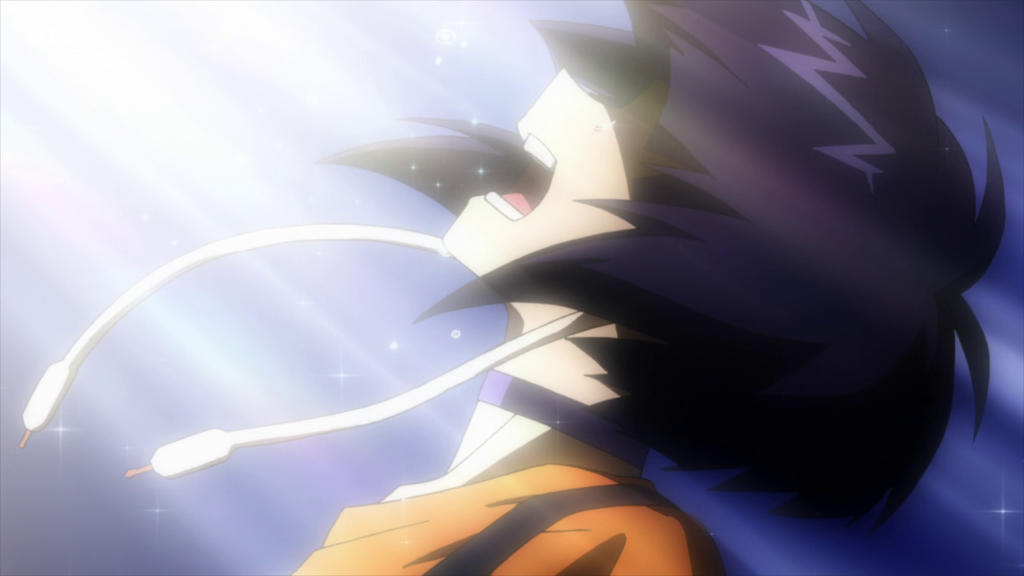 It’s the end of the U.A. School Festival arc in My Hero Academia 4 Episode 23 as Class 1-A raises the roof and Deku manages to get Eri to crack a smile, thus lifting the final remnants of Overhaul’s overbearing shadow from her shoulders. Gentle Criminal, too, makes a desperate bid to save the life of La Brava…

In terms of adaptation, this episode covers chapters 181 through 183 in a relatively direct manner. The structure is mostly the same, although there are some instances of reordering for the sake of flow and some changes to the source material to make it work better in animated form. All in all, though, Studio BONES manages to stick the landing on this arc finale that has me more than hopeful for the continued future of the series.

By far the most important part of this episode has to be Class 1-A’s school festival performance. Questions surrounding how BONES would handle this material and doubts as to whether or not it would hit the right amount of emotional beats have been floating around ever since the U.A. School Festival arc started, so it is worth delving into detail to see how things ended up shaking out.

Firstly, in terms of structure, this segment is adapted relatively directly from chapters 181 and 182. Things play out almost the same as they do in the original manga, with the only change being a reordering of some parts of chapter 181 and 182 to make the transition between the Gentle Criminal fight (which we will discuss later on) and the performance itself a little more smooth.

As a result, the main way that BONES comes at this material in My Hero Academia 4 Episode 23 is through animation and overall production value. In all aspects, big and small, the studio absolutely nails it. From the tiny cutaway to Denki and Tokoyami jamming on the guitar to the dance animation to the explosion of Quirks at the climax, everything adds up to a spectacle that serves as both a perfect arc finale arc and a satisfactory answer to the adaptational conundrum. Bravo, Studio BONES. 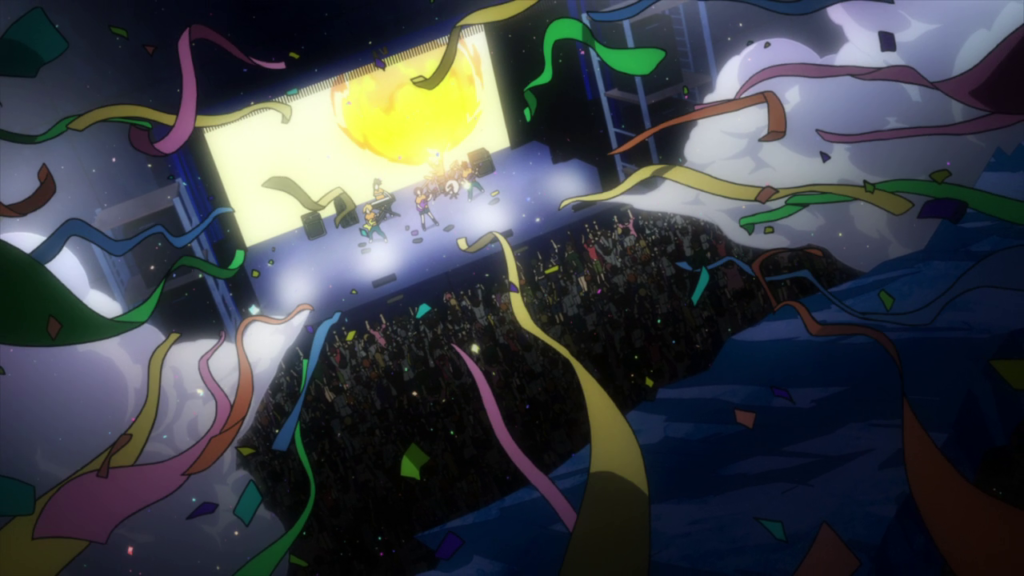 Part of this is achieved by cutting out some of the extraneous elements of the original manga, such as the audience’s narration, which is instead conveyed through the visuals. Chrissy Costanza also provides Jiro’s singing voice for the insert song ‘Hero too,’ which avoids any cringe-worthy English pronunciation and lets the uplifting nature of the song truly soar. Needless to say, BONES are going to be selling a lot of CDs with the insert song on it (which was probably the point of making one in the first place)!

Furthermore, the anime does not attempt to replicate the sketchy artwork that was unfortunately employed during the original print run of chapter 182, which was later fixed in the collected volume release. This was due to illness adversely affecting Horikoshi’s schedule and served to, unfortunately, rob the finale of its true spectacle. That might sound quite obvious, but it is worth mentioning nonetheless.

Apart from pure spectacle, what makes Class 1-A’s performance in My Hero Academia 4 Episode 23 so special is the narrative importance that it serves. Not only do we get to see Jiro’s backstory and ‘origin,’ but we also get to see the effect that Class 1-A’s continual run-ins with the villains are having on their school life. After all, it was more or less as a result of Bakugo’s kidnapping and the Kamino incident that All Might was forced to retire and the U.A. students were put into dormitories; they’re naturally shunned and even scorned because of this, but their upbeat performance will hopefully change things in this regard.

Of course, we shouldn’t forget about Eri, for whose smile this whole performance was arguably dedicated. On reflection, the fate of Eri and the trauma that she endured at the hands of Chisaki is the thread that binds the two halves of this otherwise tonally diametrically opposed fourth season, and in this sense, My Hero Academia 4 Episode 23 wraps things up very well. The quality of Studio BONES’ production means that we feel the spectacle alongside Eri and rejoice alongside Deku and Mirio when she is totally enthused by it – there was even a tear or two in my eye by the end, which just proves how effective this episode really is.

Neither should we forget about Gentle Criminal, to whose antics Deku finally put an end in last week’s episode. Following on from that, in My Hero Academia 4 Episode 23 we get a little bit of a coda as the fabulous criminal is arrested that serves to affirm not only the fact that Deku understands what Gentle Criminal is doing (trying to save La Brava) but also why he fought so desperately against him – because, deep down, they may just be the same.

We then return to Gentle Criminal at the end of the episode as he tries to reason with the police to spare La Brava from any punishment. Here, the episode moves around some of the dialogue in chapter 183 to make it work better in animated form and even makes Gentle cry as he puts his head down in defeat. In any case, the result is the same: Gentle has given in, seeing the error of his ways and finally understanding his love for La Brava. Whether or not he will return in the future is an open question, but I sure hope that he does. 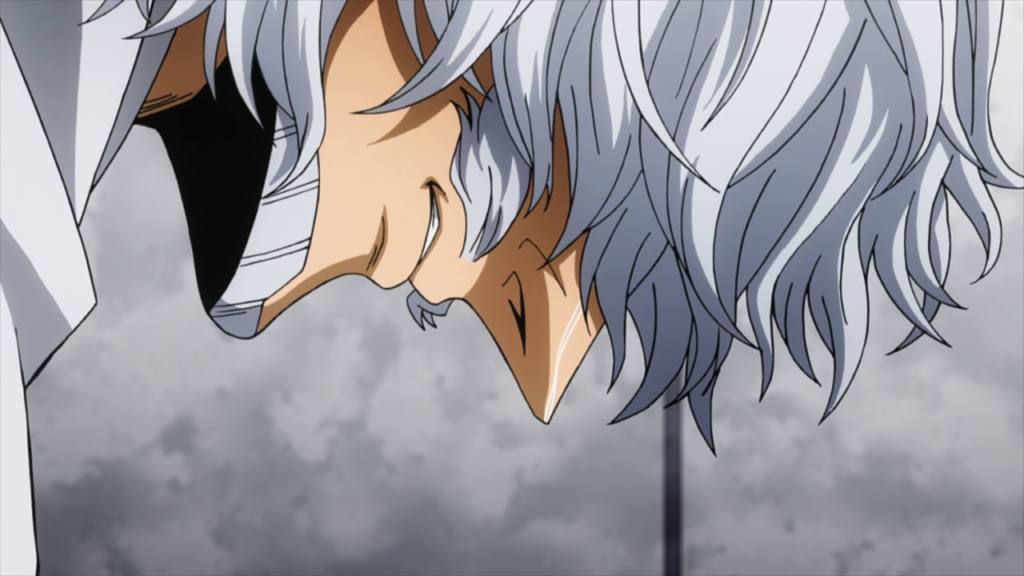 Speaking of the future, next week’s episode preview shows that we will be moving into the Pro Hero arc for the last two installments of this series. There’s also a new key visual that shows off Hawks’ character design, who is currently playing a critical role in the ongoing story. It is worth noting that this whole arc won’t be wrapped up in two episodes, but the best thing that Studio BONES can do is start it off with a bang – much like at the end of last season, where the fight with Mirio foreshadowed the Shie Hassaikai Raid arc. It’s becoming a pattern at this point, isn’t it?

In any case, Studio BONES can rest assured given the fact that My Hero Academia 4 Episode 23 has provided the series with a more than satisfactory swansong.

You can watch My Hero Academia 4 Episode 23 via Crunchyroll.