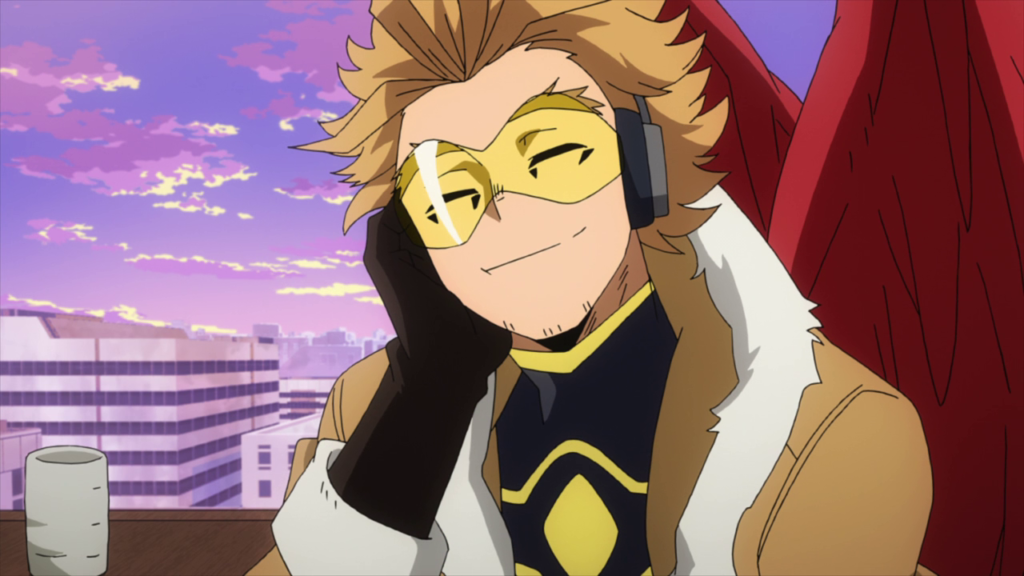 There’s time to kill in My Hero Academia 4 Episode 24 as the newly-minted number one hero, Endeavor, takes a trip down to Kyushu at the behest of the cocky number two, Hawks. Not just content with starting a new arc, this episode also ties up several important plot threads that have been left hanging ever since the end of last season, including the current activities of the League of Villains. We may be nearing the end of this fourth season, but there’s still plenty more to uncover.

In terms of adaptation, this episode dials up the pace just a little bit to cover chapters 184, 185 and 186 of the original manga, taking us firmly into the Pro Hero arc. That’s a lot more than previous episodes in previous weeks, which begs the question: just what kind of timeframe is Studio BONES looking at for their final two episodes? Judging by the original manga, it seems as if the studio has no choice but to leave us on a particularly nasty cliffhanger – here’s hoping that fans can swallow it. There’s also even a little bit of ‘controversy’ this week surrounding the way that Studio BONES adapt a certain scene, which we will get into.

Number One and Number Two

In some ways, it is astounding just how much plot development My Hero Academia 4 Episode 24 is able to cram into its 24-minute runtime. Certainly, compared to previous episodes, many more important things happen: Eri gets taken into U.A.; Endeavor finally becomes number one; Hawks make his first proper appearance, and a new type of Nomu takes the stage. All of these developments will be incredibly important to the story going forward, with some of them only paying off now in the original manga, nearly two years later.

Yet, what is more impressive about My Hero Academia 4 Episode 24 is how it manages to tie up so many of the story’s dangling plot threads to give this otherwise disjointed fourth season a sense of closure and completeness. Just in case you were wondering whatever happened to the Pussycat Dolls and Kota after the last season, then they’re all a-okay. That scene between Endeavor and All Might as Bakugo and Todoroki were getting their provisional licenses? It leads directly to Endeavor’s character development as he takes on both the prestige and pressure that comes with being the number one hero. On reflection, not a moment has been wasted. 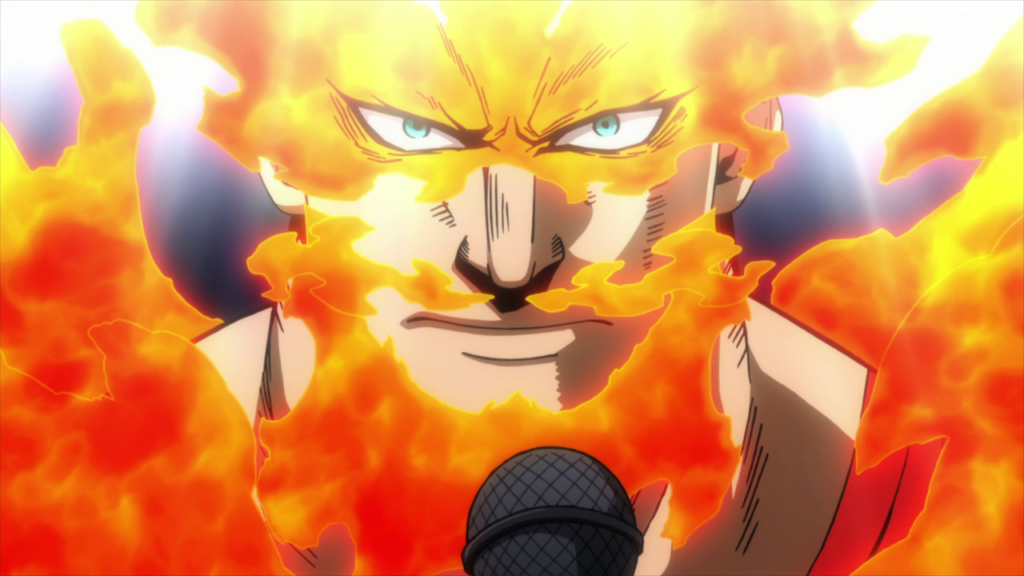 Talking more concretely about the happenings of this episode, the main draw here is obviously the Japanese Billboard hero chart event. Aside from the plot importance, this is because in a very short space of time we are introduced to several new characters who immediately make a strong first impression: Laundry Hero ‘Wash,’ who can only communicate by saying their own name; Shield Hero ‘Crust,’ whose emotions fit in perfectly with our own with regards to All Might’s retirement, and Rabbit Hero ‘Mirko,’ who cuts a striking silhouette with her unique character design. Only some of those characters will actually be important going forward, but I won’t ruin the surprise.

Of course, we shouldn’t forget about Hawks, who really deserves his own section entirely. He is playing an integral role in the manga at the moment and has cemented himself as one of the series’ best characters in a relatively short amount of time. My Hero Academia 4 Episode 24 should offer some reason as to why: his casual, abrasive attitude bounces wonderfully off of the terse Endeavor, matching in turn his carefree powers and interesting philosophy. Yuichi Nakamura is also doing a phenomenal job, carrying on from his casting for the recent movie.

Hawks’ brief appearance in My Hero Academia: Heroes Rising means, in turn, that My Hero Academia 4 Episode 24 isn’t technically his first appearance in the series. Neither is it the first in this season – remember back in episode 3, when Class 1-A was discussing their internships? Studio BONES inserted an anime-original scene where his silhouette appeared, meaning that the seed for his eventual appearance was planted in viewers’ heads a long time ago. That’s impressive, far-sighted work and I can only hope that it paid off.

Nevertheless, this episode isn’t all about Hawks. In many ways, it’s actually about Endeavor; his character development and possible redemption. Now that he has taken on the mantle of number one hero, he is seriously reconsidering his life choices and how he presents himself, encapsulated perfectly in the scene where he attempts some ‘fan service.’ Whether or not the viewer and the characters will find it in their hearts to forgive him is another question, and one that the manga hasn’t thankfully tried to find an easy answer to. There’s still a long way to go, and whether or not his journey will reach an eventual destination is still up for debate.

From a production point of view, there are several touches in this episode that are much appreciated. Aside from the aforementioned voice acting (Tetsu Inada is also doing a great job as Endeavor), there’s also the subtle use of 3D in many cases where Endeavor’s flaming body is on show. This goes a long way in terms of capturing the detail of his character design where, in other instances, this has not been achieved. There’s also the character acting during the Billboard rankings, which helps to bring to life each of the personalities of the pro heroes.

However, we should address the elephant in the room. There has been some ‘controversy’ surrounding this episode’s handling of the reintroduction of the Pussycat Dolls, mainly because the art in the anime is a little rougher than the original manga. In reality, this comes from a certain section of the fan community that will never be satisfied unless the manga is a one-to-one adaptation of the original manga, but some of their criticisms are worth addressing. 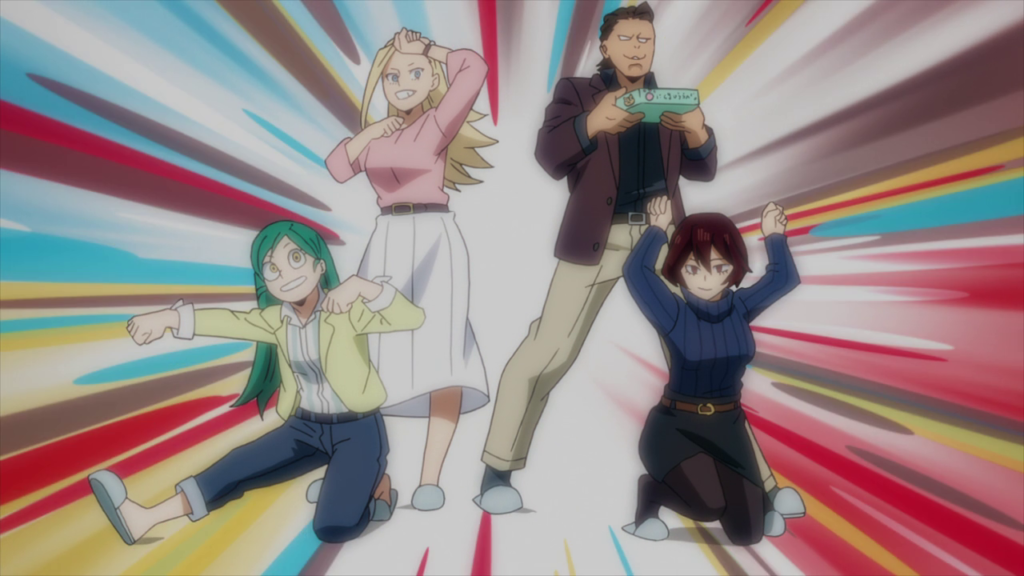 It is impossible to expect an anime adaptation to capture all of the details and nuances of its source material in the first place. The pressures of throwing together 24 minutes of TV animation on a weekly basis are simply far too much to allow animators enough time to make that happen, and neither should they want to – although this sounds strange, anime is about much more than animation. There are also all of the other tools of the cinematic medium made available to it: music, cinematography, voice acting, etc. etc.

In this sense, it was surprising to hear that this scene, of all scenes, caused such an outrage. The way that Studio BONES uses upbeat music to forecast the Pussycat Dolls’ introduction injects the scene with just as much energy as it had in the original manga, along with the excellent voice acting. So, even if the artwork was a little off, it was clear that the team had put a fair amount of thought and energy into the scene. There really is no pleasing some people.

So, My Hero Academia 4 Episode 24 does not constitute a step down in quality from Studio BONES, despite what you may have heard. In fact, the studio should be praised for keeping things as consistent as they have been over the course of this season – lesser studios nearly always drop the ball by this point, so credit is due where credit is due.

Nevertheless, there is one episode to go. And that is the episode that troubles me the most. Not in terms of story, because it is an exciting one; and not in terms of action, because I am sure that the studio can rise to the challenge. Rather, what worries me is the fact that the adaptation is positioned in such a place and has been adhering to a certain rhythm that would, without intervention, leave the last episode of this fourth season on a rather nasty cliffhanger.

Of course, we should keep in mind that season five of My Hero Academia probably isn’t too far behind. Judging by the pace of events last season, we can expect to see some sort of announcement once the final episode airs, with a release date following not soon after. So while a cliffhanger may leave a bad taste in some fans’ mouths, that palette can very quickly be cleansed.

Overall, My Hero Academia 4 Episode 24 is a fine penultimate installment in this fourth season of Studio BONES’ anime adaptation. Not only does it lead us into a new arc, but it also ties up some loose plot threads and introduces some new, charming characters. Supposed controversies aside, what’s there not to like?

You can watch My Hero Academia 4 Episode 24 via Crunchyroll.