My Hero Academia 4 Episode 3 Review: Deku vs. The World 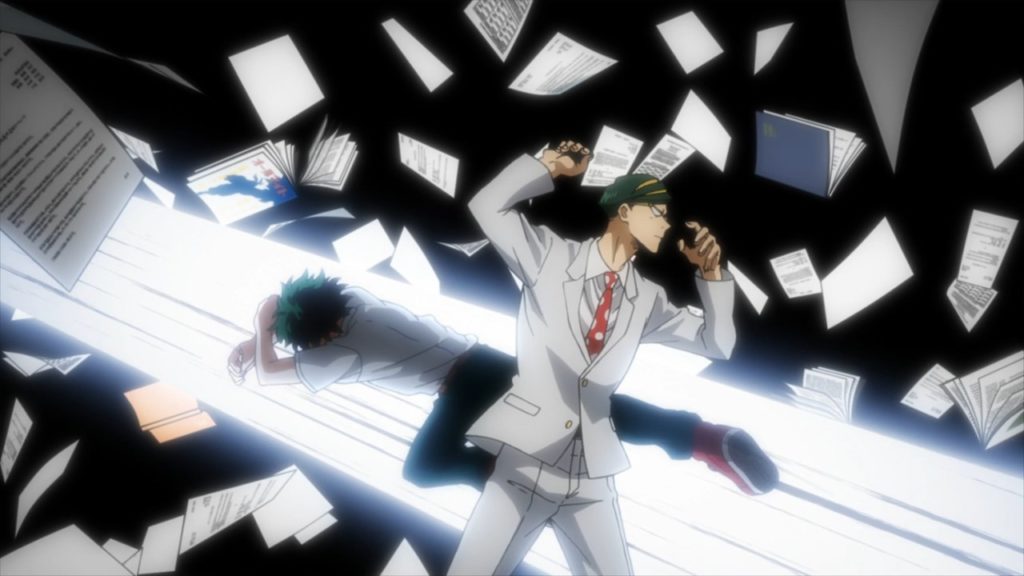 My Hero Academia 4 episode 3 sees Deku squaring off against All Might’s former sidekick Sir Nighteye in a bid to obtain his literal stamp of approval for his pro hero internship. Throughout this fight, he’s also forced to defend his heritage both as an All Might fan and the former Symbol of Peace’s successor.

Meanwhile, the rest of Class 3-A are having no luck finding any appropriate internship opportunities – that is, until Eraserhead arrives at the dorm with some good news. Deku and Mirio, approval secured, then go out on their first patrol together as interns at Nighteye’s hero agency – only to find themselves thrust into a very difficult situation face to face with this arc’s fearsome villain, Overhaul.

In terms of structure and adaptation, My Hero Academia 4 episode 3 sticks close to Kohei Horikoshi’s original manga, for the most part, diverging from the beaten path to add embellishing details only when it best suits the narrative – mirroring very closely the approach taken in last week’s episode 2.

We get our first taste of this during the brawl between Deku and Sir Nighteye. There’s a moment during the conflict where we cut away to a very short anime-original scene featuring Mirio and Bubble Girl, who comment on the racket that the pair are making while grabbing something from the vending machine. It’s a short scene, but one that was no doubt helpful to Studio BONES as they tried to stretch out the action of chapter 127 and 128 to make up the majority of the episode’s first half. 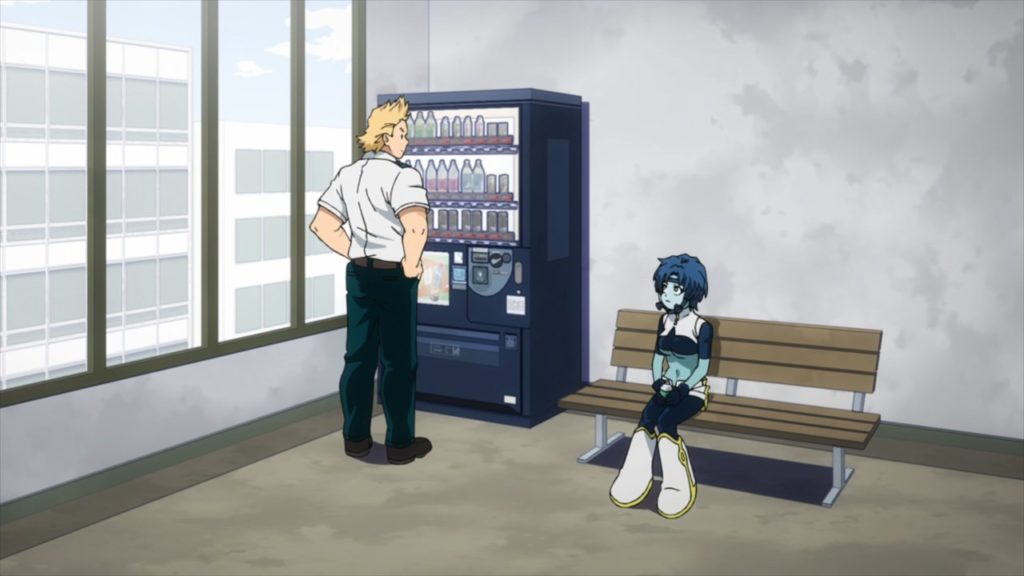 My Hero Academia 4 episode 3 then moves more fully into the events of chapter 128 in its second half, setting Deku and Mirio off on their first patrol mission together. But, before we get to see the nail-biting situation that the mission inevitably leads to, the episode cuts away once more to an anime-original scene – this time featuring the rest of Class 3-A.

They’re all moping about in the school dorms complaining about how they can’t get internships, before Aizawa barges in and tells them all the good news: the Big Three want to chat to Kirishima, Tsuyu and Ochako about introducing them to their own internship agencies, setting up those three characters’ appearances in the upcoming events of the arc. 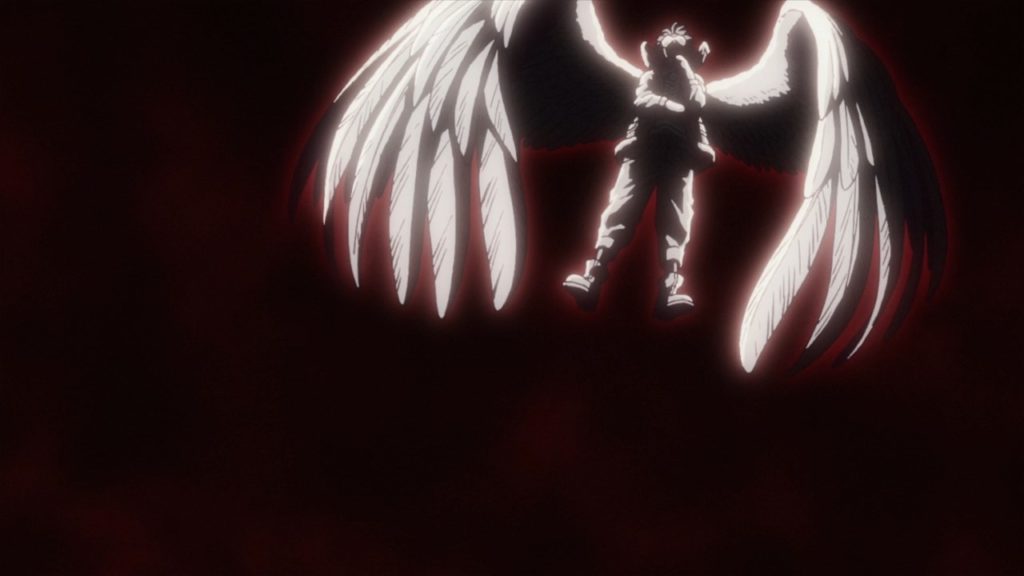 If we’re talking foreshadowing, however, there’s perhaps nothing more important than the introduction of Hawks. The introduction of the future number two hero in My Hero Academia 4 episode 3 comes when Aizawa explains to Tokoyami that he’s been called for directly by Hawks’ Kyushu-based office – setting up a character who is now becoming increasingly important in the developing narrative much, much earlier on. It’s a great move from Studio BONES that highlights the value of hindsight in the adaptation process.

All of these adaptational changes are, however, just interesting insights into how Studio BONES has approached Kohei Horikoshi’s original manga. Most people who aren’t familiar with the original manga probably won’t appreciate them, nor will they notice them. So, if there’s one thing that deserves to be talked about more than anything else in My Hero Academia 4 episode 3, then it’s that gorgeous Deku vs. Sir Nighteye fight.

In general, this fight exemplifies everything I love about shonen battle storytelling. There’s a clear aim – steal the stamp from Nighteye – and Deku goes about achieving this aim in various ways, all arranged in order of escalating tension. 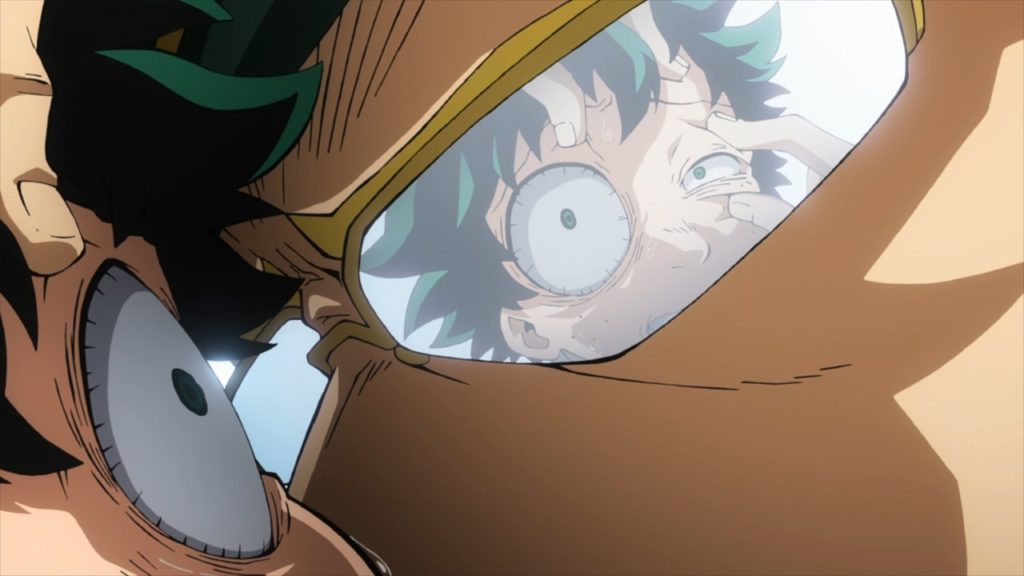 Tied into this, of course, is the inter-personal conflict between the two characters of Deku and Nighteye that comes to the fore in My Hero Academia 4 episode 3. Nighteye ultimately doesn’t believe that Deku is a worthy successor to the Symbol of Peace’s legacy, nor his quirk, One For All – believing that Mirio would’ve been the better choice, instead.

It’s up to Deku, therefore, to prove Nighteye wrong through the coming hardships of this arc and more fully step into the shoes left behind now that All Might has lost his powers, as My Hero Academia 4 episode 1 helpfully reminded us.

All of this is brought beautifully into animation in My Hero Academia 4 episode 3 by Studio BONES, who have clearly put their all into the intricacies of Deku’s movements and Nighteye’s mannerisms. The climax of the fight, in particular, where Deku throws books in the air to obscure Nighteye’s ‘vision’ is strikingly composed through the use of slow-motion (3D models are used for the books to achieve this) and dramatic color design.

My Hero Academia 4 Episode 3: Deku vs. The World

In this sense, the Deku vs. Sir Nighteye fight was definitely the star of My Hero Academia 4 episode 3. In fact, you could say that many of the adaptational changes made during this episode were intended to enhance the effectiveness of this very conflict above all else by helping to pad out the episode’s runtime so that the pacing doesn’t suffer as a result.

Nevertheless, it is interesting to see the subtle yet effective ways in which Studio BONES diverts from the original source material. What makes these differences even more important than those in previous episodes, in turn, is that they’re in service of an action scene – giving us a little taste of how the studio is planning to optimize the runtime and screenplay of each episode when things start to get a little more hectic later on. 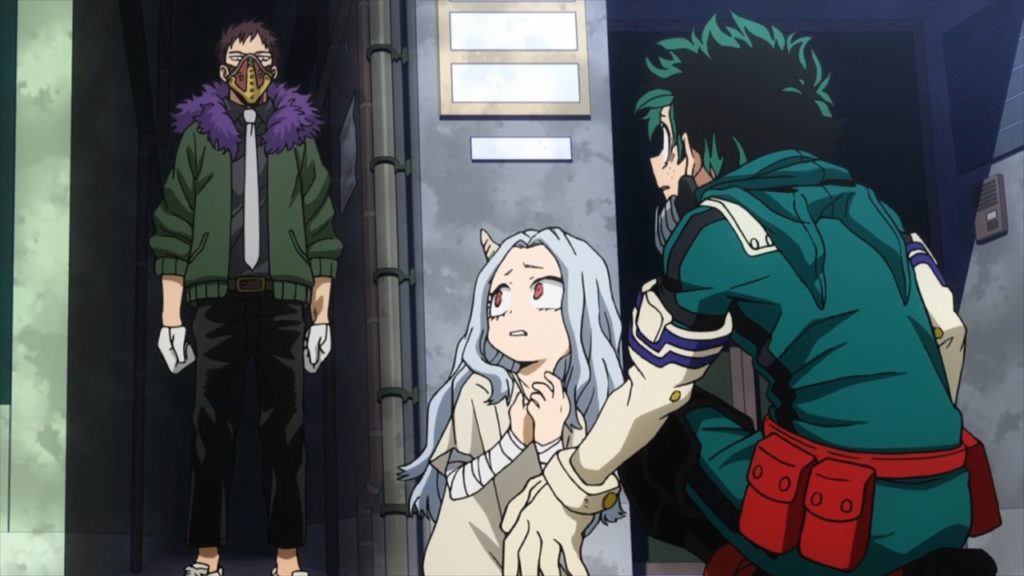 Indeed, My Hero Academia 4 episode 3 leaves off on a tantalizing cliffhanger that sees Mirio and Deku come face to face with Overhaul, the villain of this arc, which serves much the same purpose – getting us excited for what’s to come. I’ll admit it: it worked.

You can watch My Hero Academia season 4 as it airs via Crunchyroll.