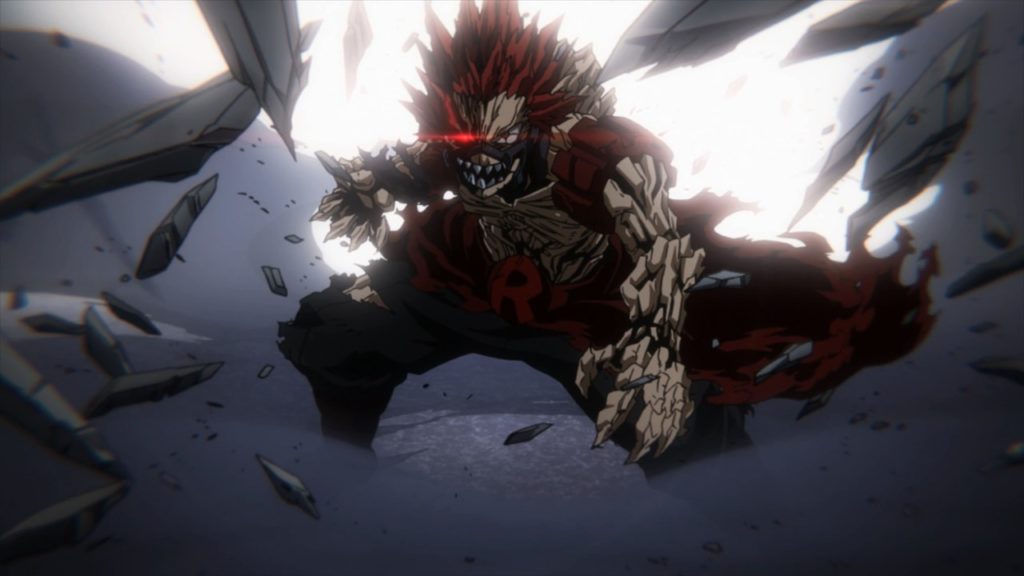 My Hero Academia 4 Episode 5 shifts away from Deku for a change and instead focuses on the internship experiences of his classmates Tsuyu, Ochaco and Kirishima. The latter, however, is the main focus as we get to his upgraded Quirk in action alongside Fat Gum and Suneater in Osaka.

My Hero Academia has always been home to some incredible animation. Heck, it was only last week that I basically wrote an entire piece on the subject. My Hero Academia 4 Episode 5, however, hits us hard and fast with some of Studio BONES’ best.

Barely a second into the episode’s runtime, we get a phenomenal cut from the indomitable Yutaka Nakamura as a gigantic villain runs along a highway bridge, jumps into the air, and launches into another giant-sized shark foe. Police cars then screech up to the scene as the impact of the villains’ gargantuan blows rock the scene, giving a real tangible feeling of weight and force. It’s classic Nakamura, through and through.

Starting My Hero Academia 4 Episode 5 in such a fashion is a bold move, as you’d need something really special to top that. Luckily, Sakiko Uda is here to save the day with her excellent cut showing off Kirishima’s newly leveled-up ‘Hardening’ Quirk.

Kirishima (hero name: Red Riot) faces up against a villain who can produce blades from his body, but things take a turn for the worse as he takes a Quirk-boosting drug and puts the lives of bystanders at risk. In response, Red Riot has no choice but to go beyond his limits, hardening his body to the point that he can ‘bulldoze’ through.

Uda’s cut hardly captures the same level of detail as the artwork in the original manga, but she more than makes up for that with how deftly she is able to capture the motion of Kirishima’s Quirk in action. Effects and action lines really emphasize how much Kirishima’s body is being pushed beyond its limits, before finishing off with a stylish pose.

Nakamura’s cut at the very beginning of My Hero Academia 4 Episode 5 was certainly great, but I’d say that Uda’s cut just edges out ahead. That’s not because the Red Riot cut is somehow better than the initial cut, but because it matters much more to the story.

The development of Kirishima as a character is one of the main focuses of this arc, and this is delivered above all else through the representation of his Quirk – so it’s great to see that the staff over at Studio BONES already have that aspect already firmly under control. Nakamura’s cut is ultimately more tangential, even if it is great to look at.

For however fantastic those two cuts in My Hero Academia 4 Episode 5 were, however, I wouldn’t blame you if you came away from this episode slightly disappointed.

There’s a real sense that the content of this episode is stretched quite thin, as it only covers about three chapters from the middle of chapter 131, where last week’s episode left off, to the middle of chapter 134 once more. There’s also the fact that all of this content is largely tangential to the main plot, even if it does hint at what the contents of Overhaul’s evil plan might be with all of the Quirk-boosting and erasing drugs. 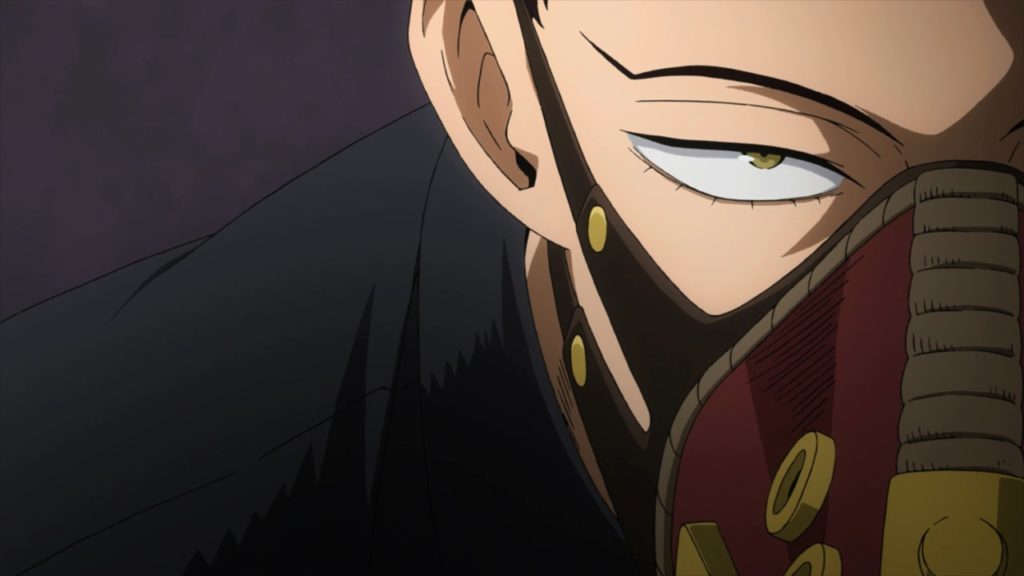 My Hero Academia 4 Episode 5 also sees fit to reiterate on the meeting between Shigaraki and Overhaul, which was already established last week. What makes this even worse is the fact that the meeting isn’t even finished by the time the episode is over!

The addition of a fair amount of anime-original content also feels like an admission on Studio BONES’ part that they cut things a little short this time around. Deku’s concluding monologue after the credits (which come in very early at the 19-minute mark) feels particularly egregious thanks to its reiterative nature. 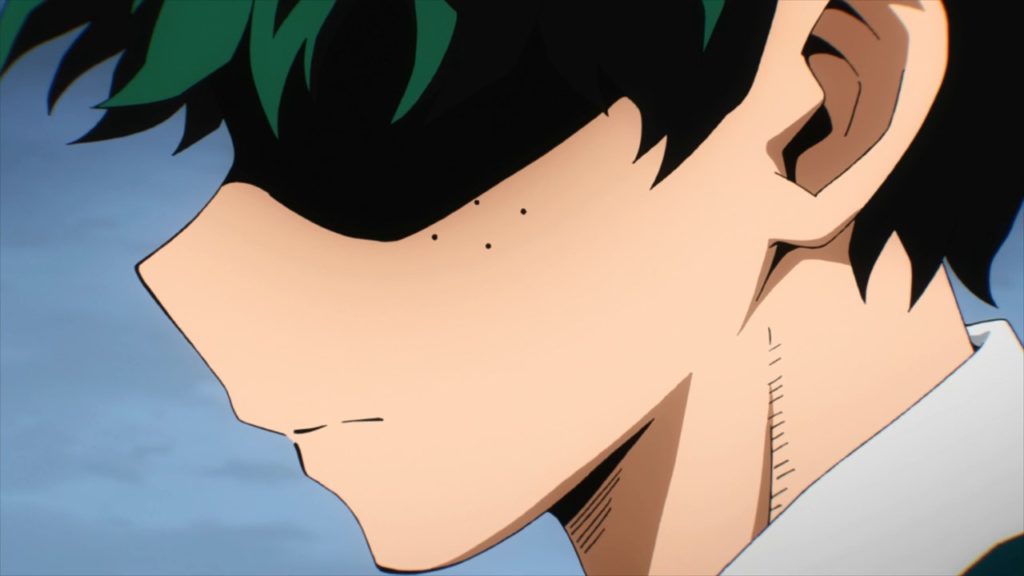 Some of this extra content makes sense, such as the extension of the aftermath of the Red Riot battle scene where one of the bystanders asks Kirishima for his hero name. This explains how, when the episode resumes after the credits, the name Red Riot is all over the news.

Knowing that Red Riot will be a vital character in the events of this arc, in turn, makes the insertion of a little portion of his backstory during the battle scenes quite understandable. For those not in the know, it will no doubt stoke their anticipation and curiosity – all of which will be delivered upon by this fantastic arc.

We do, however, have to cut Studio BONES just a little bit of slack. They are just about to launch into a whole string of very action-heavy episodes if the preview at the end of My Hero Academia 4 Episode 5 is anything to be believed. It’d be understandable if they wanted to use this opportunity to relax for just a second and gets thing ready – all the while giving the fans some eye candy with those Nakamura and Uda cuts.

Perhaps I’ll also use this opportunity to grasp at straws for a minute and talk about the Osaka setting of this episode, as Kirishima interns at Fat Gum’s hero agency. It wasn’t until I watched this episode that I even realized that Fat Gum was from Osaka, with his Kansai-ben dialect and appetite for takoyaki, as I’ve always read the original manga in English via Shonen Jump. Color me surprised, then, when Osaka’s iconic ‘Running Man’ was suddenly turned into a running All Might. 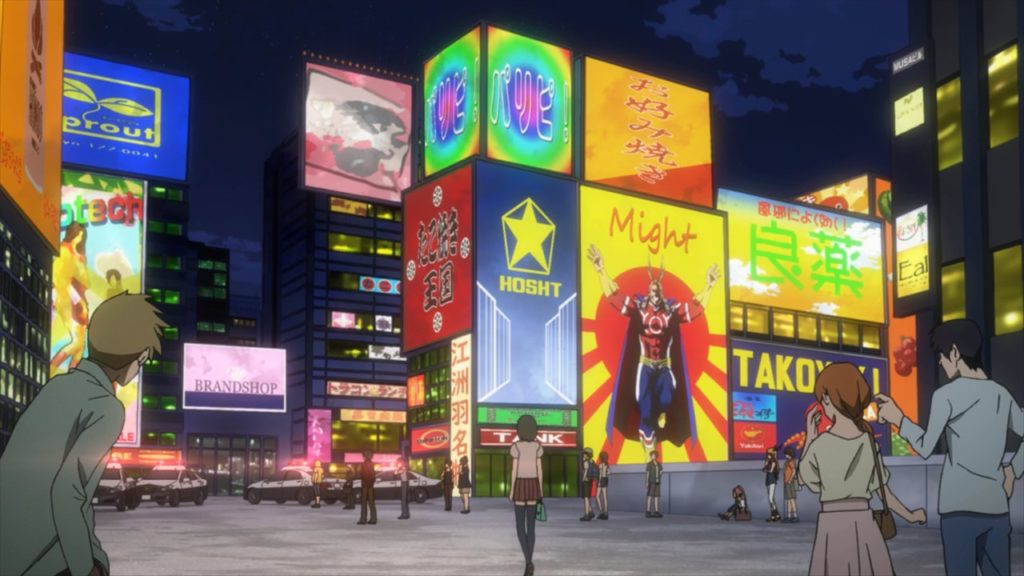 In any case, next week’s episode should prove a little more exciting. We’re in the endgame now; I can feel it.

You can watch My Hero Academia 4 Episode 5 via Crunchyroll.