My Hero Academia 4 Episode 8 Review: He Who Eats the Sun 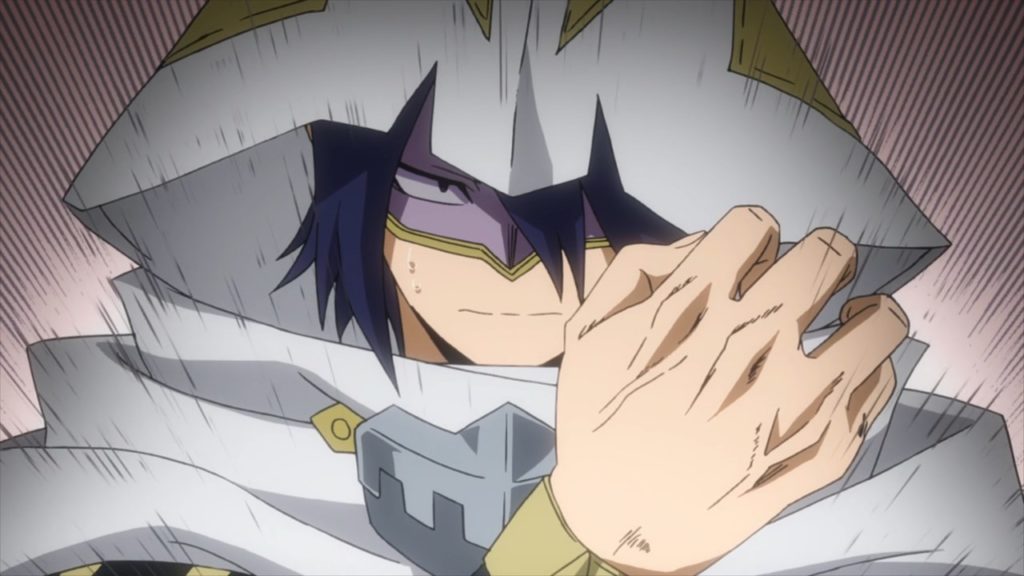 After a slow start, My Hero Academia 4 Episode 8 is now well and truly in the thick of it as the spotlight turns to perhaps the least explosive member of the ‘Big Three’ – Tamaki Amajiki, AKA Suneater – in an excellent fight sequence that has me well and truly excited for more.

My Hero Academia 4 Episode 8: Filling in the Gaps

Given that the episode is called ‘Suneater of the Big Three,’ it should come as no surprise that this episode is focused almost exclusively on Tamaki Amajiki and his backstory.

But it may surprise you to hear that many of the most pertinent character moments in My Hero Academia 4 Episode 8 do not come from the original manga, but are anime-original – most particularly the last part of the beginning sequence where Mirio dashes forwards and Amajiki watches him go. 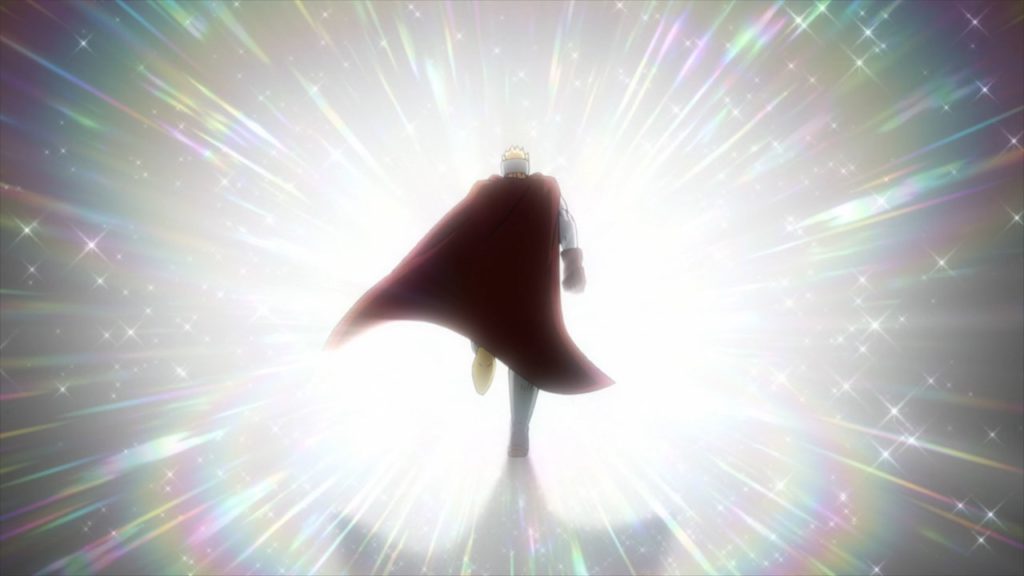 Not only is this sequence effective in terms of bridging the gap between last week’s episode and this week’s – an aim that is also furthered by BONES’ decision to start off the episode with some of Amajiki’s backstory otherwise present in chapter 140 – but this decision in particular really shines when a moment later on in the episode calls back to that opening image. It’s adaptational magic that is only possible from a studio such as BONES that is so engaged with the source material and story.

More magic is on display later on in My Hero Academia 4 Episode 8 as the studio continue with their excellent representation of Sir Nighteye’s ‘Foresight’ Quirk, playing back the memories that All Might’s former sidekick obtained last week as a film reel, which helps us to understand how his Quirk functions in an endeavor that was completely absent from the original manga. Furthermore, the moment where the camera swings through the hole that Deku and Red Riot bored to reveal the rest of the raid team was a nice touch that seeks to replicate the dramatic effect of the original double-page spread. 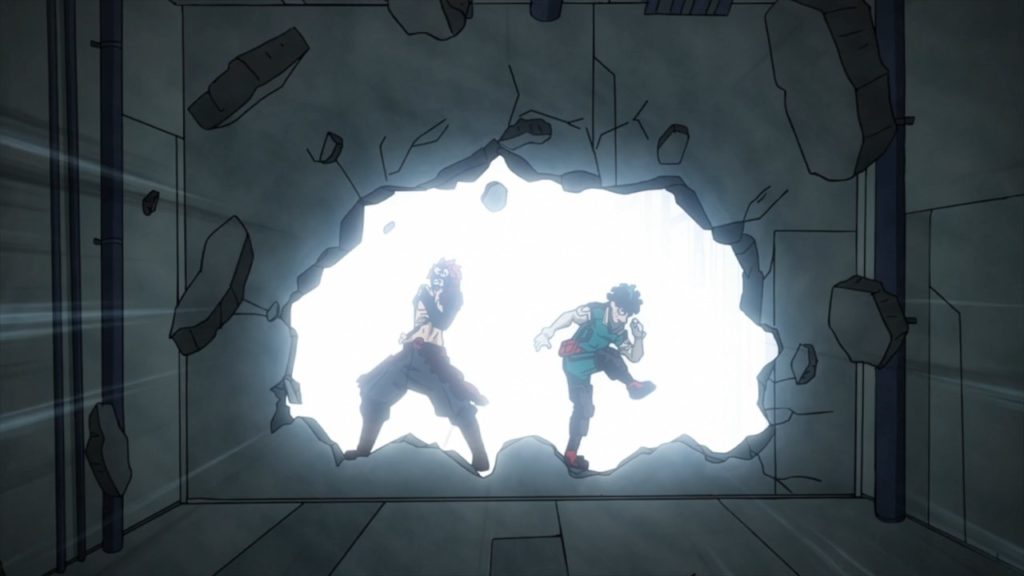 Beyond visuals, the talent of one member of the My Hero Academia anime team, in particular, shines through this week. That member is composer Yuki Hayashi, who created a whopping four tracks for this episode that really caught my attention. Some of these seem like old compositions – the guitar in Mirio’s theme as he dashes ahead towards the mid-point of the episode gives this away – while others are entirely new, including what seems to me to be a new remix of ‘You Say Run’ during Suneater’s three-on-one battle.

He Who Eats the Sun

But by far the most impressive track in My Hero Academia 4 Episode 8 appears to be a new character theme for Suneater, a guitar-based track that features more throaty strumming as well as the electric guitars that make up such a large proportion of Mirio’s theme.

It’s almost a shame that we only get to hear a little bit of this in the episode as Suneater tells the rest of the team to go ahead, but Hayashi’s new remix of the iconic battle theme that plays throughout his battle does more than enough good – coalescing into an excellent climax as Amajiki activates his ‘Chimera Kraken’ form. 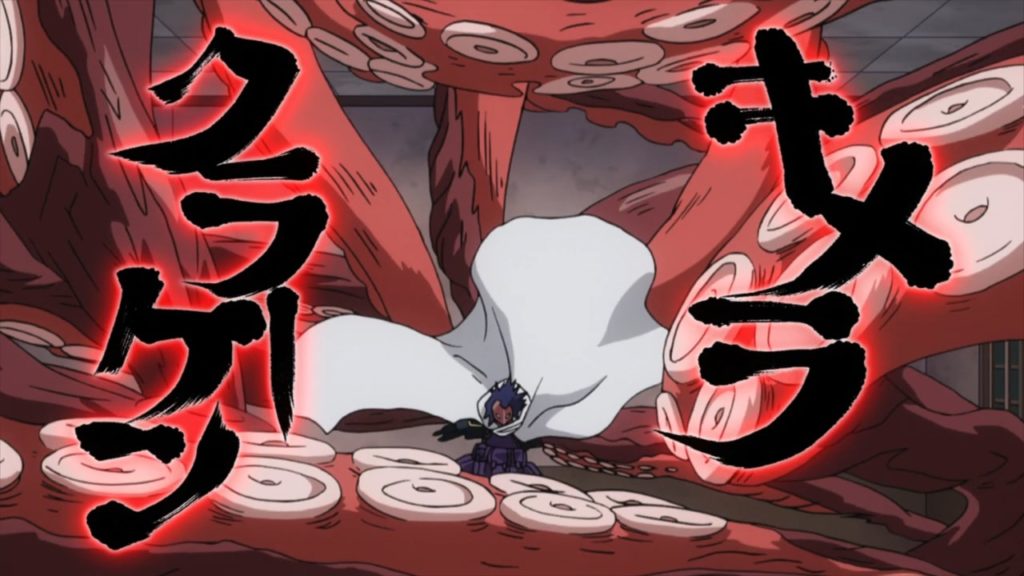 Speaking of Amajiki’s Quirk, I find it hard to imagine that anyone came away from My Hero Academia 4 Episode 8 with anything but newfound respect for the unusual set of powers The level of versatility, both pre-meditated and instantaneous, clearly puts the otherwise unremarkable member of the ‘Big Three’ definitely up there in terms of power and cool factor with the best of them – all helped along by Studio BONES’ excellent adaptation.

It’s great to finally see something like Suneater done justice as a fan of the original manga, as it was almost two years ago that I read this fight scene and thought to myself that anime-only fans were going to be in for a treat. On this front, I’m glad that I was not mistaken.

Another thing that I knew anime-only fans were going to enjoy was the nature of the battleground for the Shie Hassaikai Raid arc – the Shie Hassaikai headquarters – which shift and change shape due to a Quirk of one of Overhaul’s fearsome Eight Bullets. Again, Studio BONES did this key aspect justice as they chose to animate the scenery in 3D and layer the 2D characters on the top in order to allow for maximum texture-accurate distortion. 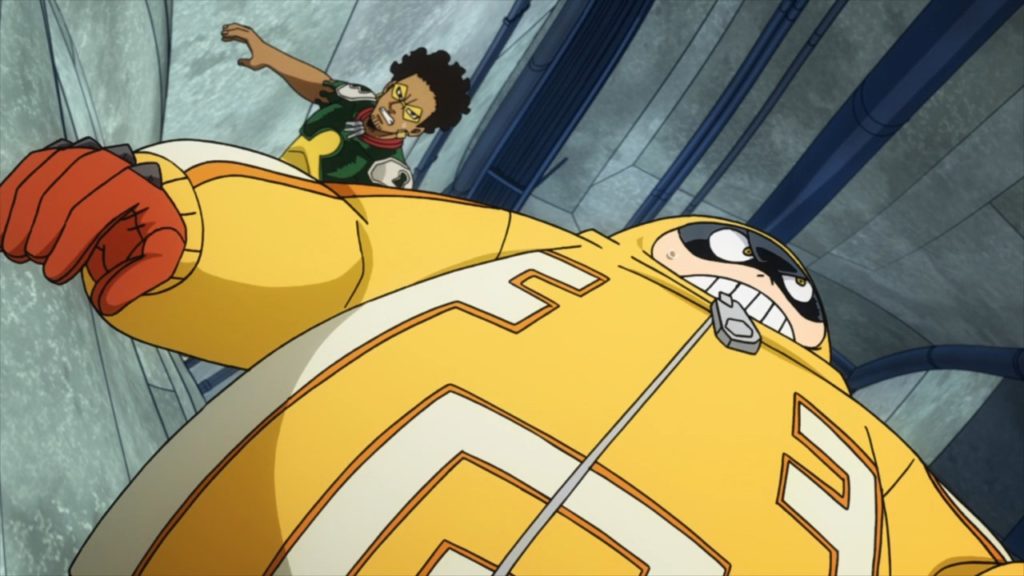 My Hero Academia 4 Episode 8 marks the second episode of the Shie Hassaikai raid proper, and already it’s proving immensely entertaining. Aside from all of the interesting adaptational notes, it’s just so refreshing to see Horikoshi Kohei’s character-focused storytelling at work once more as we dig deep into a new character and see what makes them tick. Clearly, it worked, as Suneater was apparently trending on Twitter following this episode.

It’s also surprising to note that while it’s taken so long for Studio BONES to actually get around to the meat of this arc, I don’t feel particularly frustrated by this fact. Following my epiphany last week that all of this waiting around might have actually been done on purpose, now that we’re into the good stuff my previous frustrations hardly seem to matter – if anything, watching the episode alongside the original manga makes Horikoshi’s original writing seem a little too fast-paced. Now there’s some food for thought.

But My Hero Academia 4 Episode 8 is only a taster of what’s to come. Aside from all of the revelations yet in store, next week’s episode is surely the most anticipated of them all – Red Riot’s backstory and shining moment. Look forward to it.

You can watch My Hero Academia 4 Episode 8 via Crunchyroll.