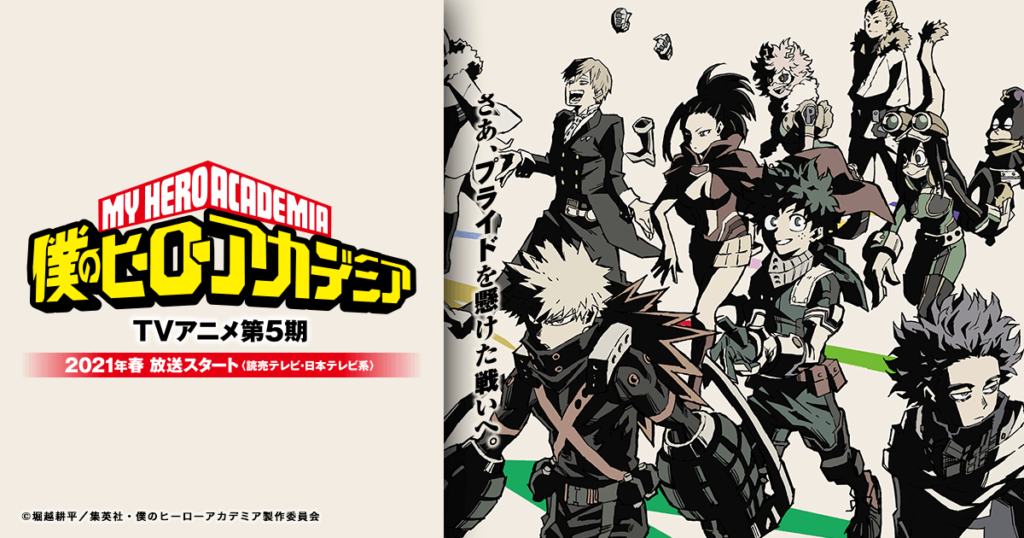 My Hero Academia is one of the biggest anime franchises dominating the pop culture scene. From taking over the New York Times bestsellers chart, raking in popularity across streaming platforms, and inspiring a boatload of merchandise, Kohei Horikoshi’s franchise is well into its peak as the anime reaches its fifth year anniversary.

Coming off of four very successful seasons, the upcoming fifth season is sure to deliver its own fair share of surprises and excitement. Currently, the franchise is divided into two large storylines: the U.A Beginnings Saga and the current Rise of Villains saga. There’s plenty more My Hero Academia coming, with plans for a mysterious third film.

Since Bones is releasing these year by year, you’ll probably need a quick refresher for the fifth season and what to expect in the upcoming Joint Training Arc.

At OTAQUEST, we’re here to provide all the information you need as the franchise gears up for its biggest year yet. My Hero Academia may well be the longest origin story for any superhero, so let’s recount what has happened so far. 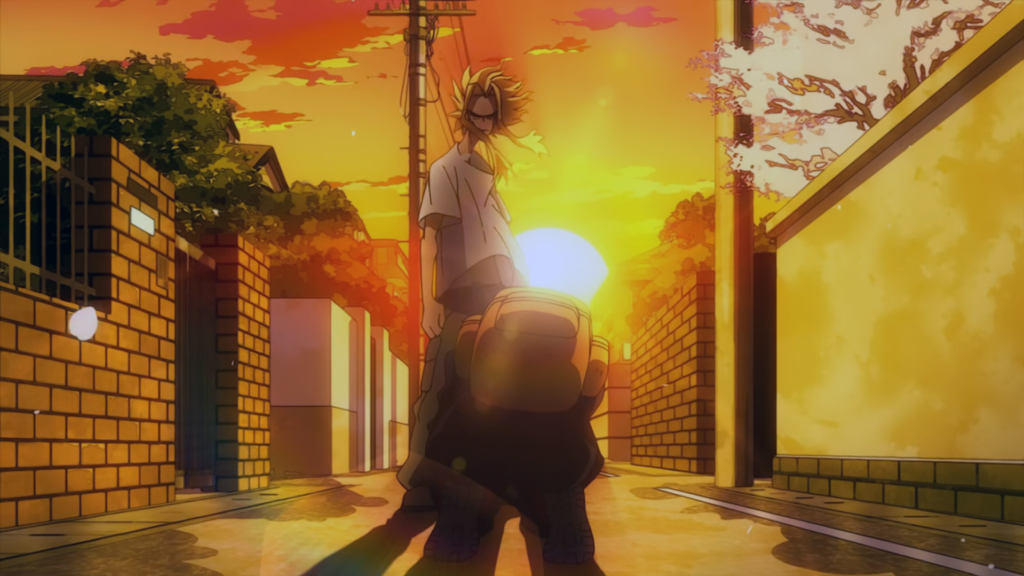 In a world of superheroes, everyone needs an origin story. Special abilities called Quirks are commonplace in society, but young Izuku Midoriya has none and is constantly picked on by his childhood friend, Bakugo, because of it. He looks up to the invincible number one hero All Might as his idol and dreams of being like him one day. By chance, he bumps into him and after some circumstances, he inherits his secret superpower: One for All.

Soon after, Izuku is accepted into class 1-A of U.A High school, a prestigious training institution for young heroes like himself. As he meets new friends and adapts to his new surroundings, the dangerous League of Villains make their unannounced debut, attacking the school with an army of Nomu monsters.

Tomura Shigaraki makes his presence known by displaying a brutal decay Quirk. All Might comes to the rescue and saves Izuku and the rest of the class. Although it was a bit of a struggle for him to win the battle, he managed to drive off the enemies with Izuku’s help and keep everyone safe.

But this isn’t the end of the story. 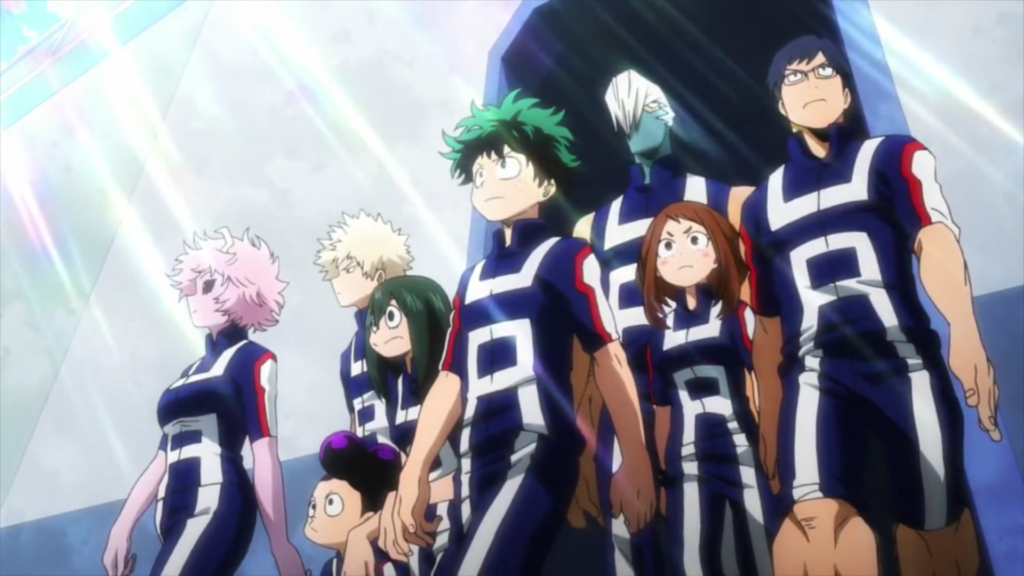 Season two of My Hero Academia picks up from the end of the first season. Izuku and the rest of Class 1-A are invited to participate in a large school sports festival that acts as a showcase of their Quirks. Pro Heroes from all over have come to watch the festivities to scout and find prospective young heroes as their sidekicks. In addition to Class 1-A, other classes in different U.A departments also make their presence known.

The tournament featured many hard-fought and spectacular battles, with one of them being Izuku versus Shoto Todoroki, a student who can use both fire and ice powers, but refuses to use the former. The battle ultimately resulted in Izuku’s loss, but a newfound revelation for Shoto, who has a strained relationship with his father watching in the stands: the number two hero, Endeavor.

Things come to a fiery conclusion when Shoto faces off against Bakugo, who inadvertently wins the battle and the tournament, much to his chagrin. It wasn’t all bad news, however, as both Izuku and Shoto impressed some heroes enough to warrant intern positions. 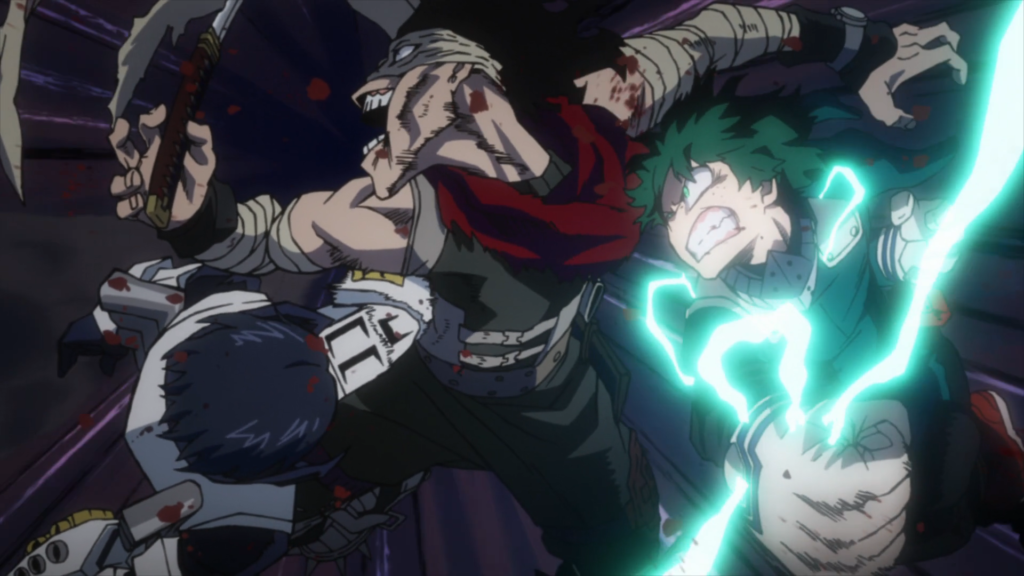 Later, the situation worsens when a vigilante named Stain proclaims himself as the Hero Killer, targeting superheroes he believes have failed society. One of his victims was class rep Tenya Iida’s older brother, whose hero career ended after the incident. Wanting revenge, he, Izuku, and Shoto eventually confront Stain, defeat him, and send him to the authorities.

Afterwards, Izuku and the rest of class 1-A take their final exams by facing off against their teachers, including All Might. Izuku manages to pass after learning to use his powers to his own advantage, while Bakugo and Shoto fail their assignments. As the students of U.A finish their exams, The League of Villains start making their move and have found some new recruits. 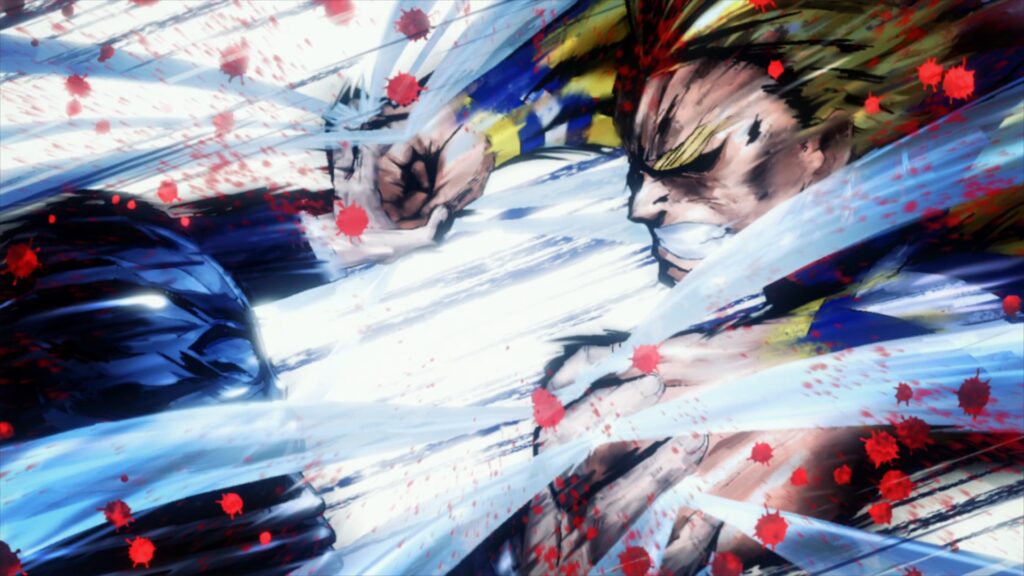 Season three of My Hero Academia is packed with story and development. It starts with Izuku and the rest of the U.A classes doing a practical exercise in the forest, when they’re all ambushed by an attack from the League of Villains. Twice, Himiko Toga, and Dabi make their terrifying appearances. Izuku and others do their best to get everyone to safety, with him fighting off a villain with all his power to save a young boy.

Afterwards, All Might and some Pro Heroes decide to take the initiative and strike the League of Villains at their hideout. Simultaneously, Katsuki is kidnapped and Izuku hatches a plan to rescue him, getting assistance from Tenya, Momo, Todoroki, and Eijiro. Their plan is successful as the Pro Heroes manage to capture one member of the League, Kurogiri, from escaping.

Unfortunately, the omnipotent One For All shows up to defend his villains, clashing with All Might in a heated battle with everyone watching. Using the remnants of his All for One quirk, All Might delivers a final, explosive blow to One For All, finally defeating him. Although his powers have gone and he’s no longer the Symbol of Peace, All Might vows to train his successor Izuku well.

U.A School is subsequently made into a boarding school for Izuku and friends, with them having to live together for their safety. Afterwards, they participate in the provisional hero license exercise, which gives them the right to legally practice as superheroes. Izuku gains his license soon after and starts looking for opportunities to intern with an active superhero. 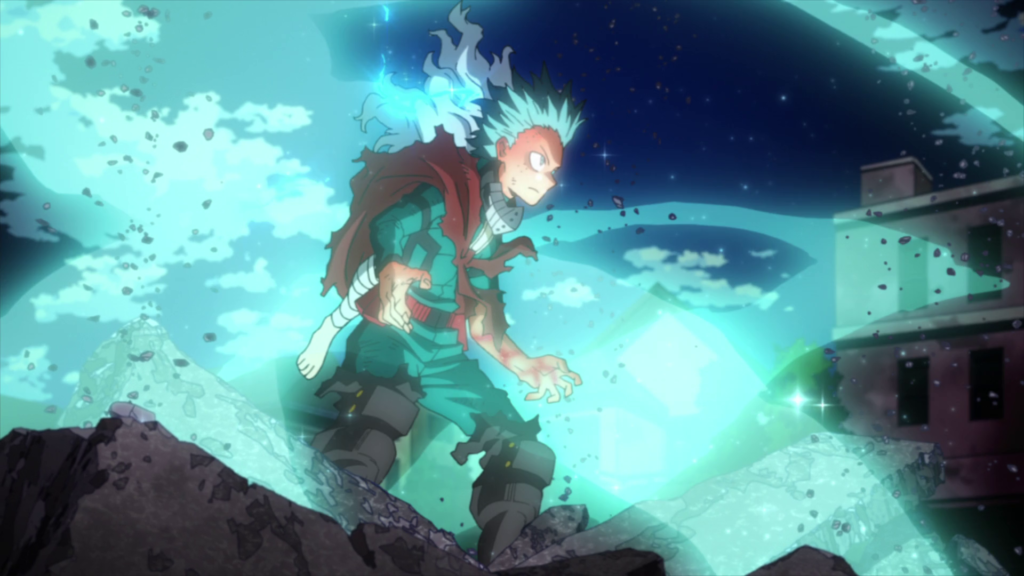 Through a recommendation from an upperclassman named Mirio, Izuku is accepted to work with a superhero named Sir Nighteye, All Might’s former sidekick. They get themselves involved with a Yakuza member, Kai Chisaki, whose devastating quirk Overhaul helps him rule the Shie Hassaikai organization with an iron fist.

He currently uses his foster daughter, Eri, to manufacture special bullets to permanently erase a person’s Quirk. By chance, Eri bumps into Izuku and Mirio and asks for their help before being captured by Kai again. Izuku vows to help her and works with Mirio and Sir Nighteye to free her. As they undergo the rescue operation, the battle climaxes with Izuku beating Kai, but with Mirio losing his Quirk in the process and Sir Nighteye succumbing to his injuries. Nonetheless, Eri is rescued and provided safety at U.A High School.

All Might laments his former sidekick’s death as the latter reconciles with him for the last time. Afterwards, All Might has a discussion with Endeavor, who has taken over his rank as the number one Pro Hero. Meanwhile, Shoto and Bakugo, along with other students who failed the Provisional hero License, are sent to deal with some elementary school children in order to pass the exam. Their job is to win the hearts of these kids and learn the value of heroes as role models, which they all successfully learn. 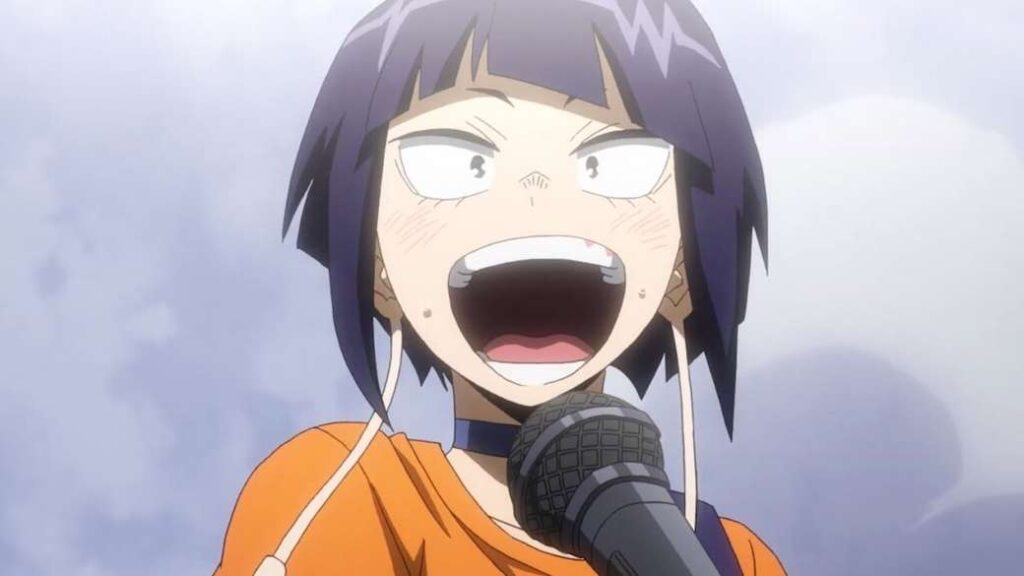 After the incident, Izuku and Mirio think of ways to cheer Eri up and provide some much needed fun during some turbulent times. The 1-A Class eventually comes up with an idea to hold a musical performance at their school festival. It was a smash success, with Eri gaining some much needed positivity in her new life.

Soon afterwards, the number two Pro Hero Hawks meet with Endeavor, who is still dealing with the effects of taking over All Might’s mightiest hero mantle. A powerful Nomu creature soon interrupts them and battles Endeavor to the death. With everyone watching and Hawks providing him assistance, Endeavor uses all his fire powers to blow Nomu away and prove to everyone that he’s a dependable figure.

Riding off the high of the musical performance, Izuku realizes that he has to get stronger to protect the people he cares about. Then, his powers start acting funny and he has a dream about the previous hosts of One for All.

Gearing up for Season Five: The Joint Training Arc Begins! 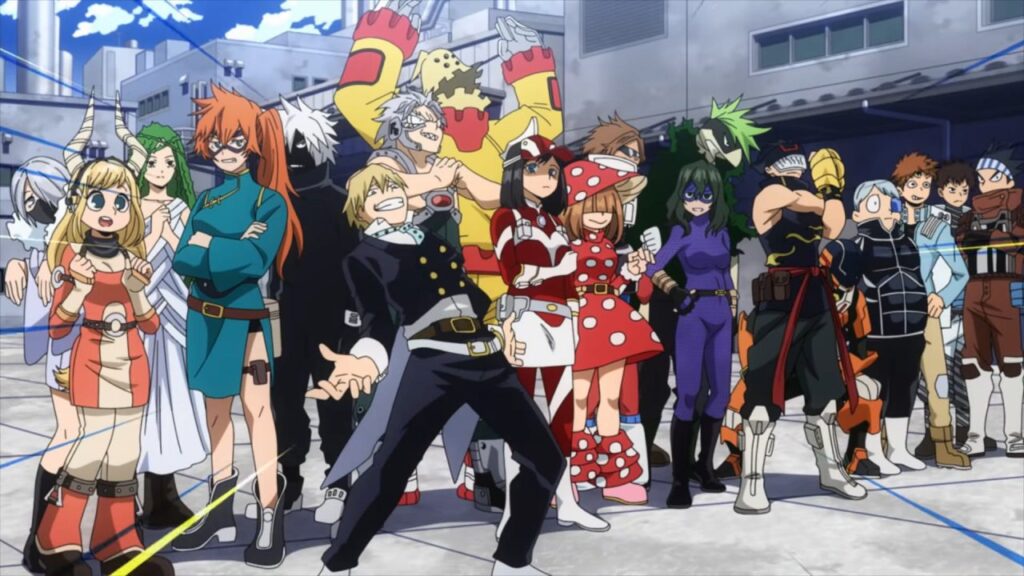 Manga readers will notice that there will be a particular focus on 1-C student Hitoshi Shinso who is looking to find his way into the Hero Course curriculum. It’ll also spotlight his relationship with Izuku and how the two interact over the course of the mock battle.

Season five of My Hero Academia will premiere with a recap episode slated to air on 27 March 2021, followed by the first episode on 3 April 2021. It will stream on both Crunchyroll and Funimation.