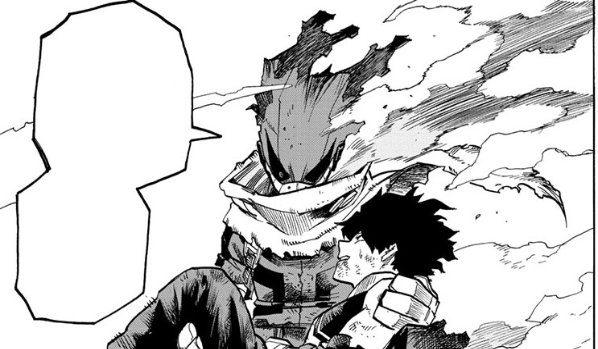 The beginning of a new week can only mean one thing: time for new Weekly Shonen Jump! This is where Jacob investigates the latest and greatest in the magazine, telling you what’s worth your time and what’s not. You can find coverage of other series under the tag Jump Time. Here’s My Hero Academia chapter 307.

After the colossal amount of changes made to the status quo in last week’s chapter, I was curious enough to discover what exactly the new normal was in My Hero Academia chapter 307. We already knew that Deku was out of school, but what is he doing exactly? Although the Pro Heroes’ strategy is to shelter everyone in the hero schools, this didn’t exactly go down well at the press conference. How is the policy fairing out there in wider society?

To take that last thing first: not very well. My Hero Academia chapter 307 starts off with Ketsubutsu Academy High School students Grand and Turtle Neck (now drafted into the ranks of the Pro Heroes) trying to convince some of the ‘hard-liners’ to give up and move to U.A. Quite rightfully, he asks: ‘Once everyone’s crammed in the school, what happens when those devils decide to attack there? You kids think you can do a damn thing about it?’ Predictably, they don’t manage to convince him or his company to take advantage of their protection.

Grand and Turtle Neck are then on their way back to base when a surprise foe comes their way: Muscular, who has been presumably freed from prison in the aftermath of the Paranormal Liberation War. This took me by surprise given is that he’s referred to as ‘Jailbreaker’ on the radio (either he’s changed his moniker or the other heroes don’t know his old one) but this just makes his reintroduction all the more impactful when it does happen in My Hero Academia chapter 307.

Try as he might, there’s no way a trainee hero like Grand could stand up to such a powerful villain as Muscular, so who comes to save the day? Deku, that’s who, acting like a regular old vigilante. The end of My Hero Academia chapter 307 also ties quite nicely into the end of last week’s, too, because the destruction that Deku saw was presumably caused by Muscular.

Putting aside the prospects of a Deku vs. Muscular rematch for now, My Hero Academia chapter 307 gives us a taste of the new normal, how fractured the world is, and what exactly Deku is doing to heal it. Given that this is the ‘final chapter,’ I have no idea just how much more information we’ll get, but I’m more than on board for the time being!

You can read My Hero Academia chapter 307 for free via VIZ Media.