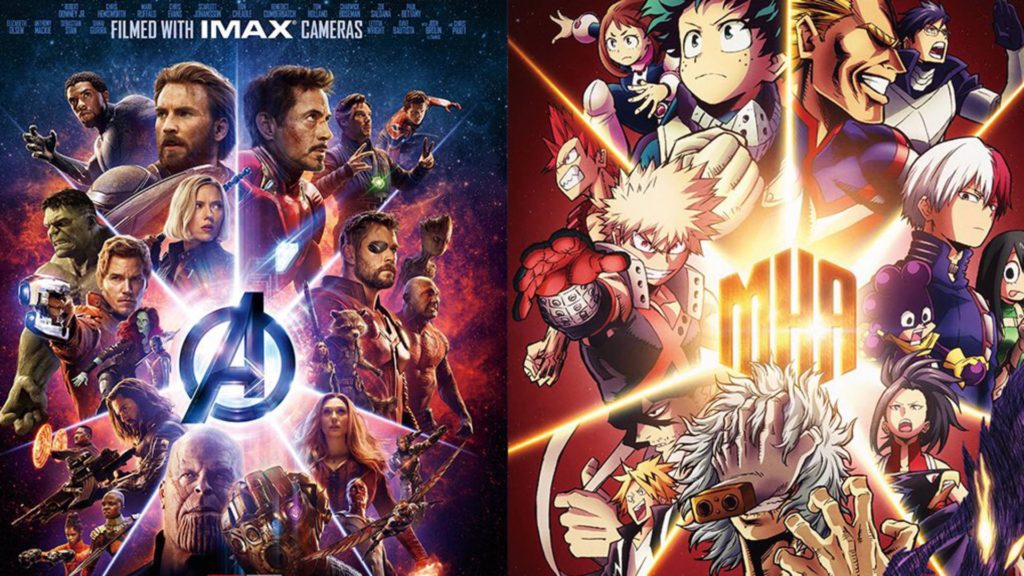 The visual riffs off of the latest IMAX poster for Infinity War, making for a rather amusing crossover. I particularly enjoy the fact that Mineta has taken the place of Rocket Racoon – it’s almost too fitting. What’s more amusing are the various videos emerging from this collaboration, such as this cleverly edited one:

This is an obvious ploy to get Japanese audiences to watch the trailer for Infinity War by disguising it as My Hero Academia content, but it’s amusing nonetheless – it’s honestly not too far removed to think that Deku would be inspired by the Avengers if they occupied the same universe. Another attempt to pique Japanese interest in the upcoming movie came in the form of several ‘introduction’ videos, where the members of Class A run down the powers and origins of various heroes of the Marvel Cinematic Universe. Check out the first one, featuring Deku, below:

Now that I’m thinking about it, Deku liking Captain America fits really well – almost too well. They both had humble origins and have a strong sense of justice that pushes them further beyond. The same goes for the other pairings that the videos present – Bakugo shares Iron Man’s arrogance; Uraraka is a kick-ass martial art female hero like Black Widow; Iida is thoughtful and intelligent like Doctor Strange; Todoroki is detached and aloof like Thor; and All Might’s power functions in almost exactly the same way as Hulk’s.

None of those similarities are unusual when you consider the author of the series, Horikoshi Kouhei, has never tried to hide his love for Marvel. Before getting My Hero Academia serialized, he would post fanart of Marvel heroes such as Deadpool often, and he even got the chance to draw a special promotional visual for Spider-Man: Homecoming when it premiered last year in Japan.

No doubt Horikoshi is ecstatic about finally having the opportunity to collaborate with his favorite comic franchise, and My Hero Academia fans will also be pleased to know that you can actually win a poster set of both the collaboration visual and the Infinity War poster by following both the My Hero Academia and Avengers Twitter accounts and tweeting the hashtag ‘#アベンジャーズ_ヒロアカヒーロー投票.” 20 of this set will be up for grabs. For terms and conditions, please check the collaboration’s official website.