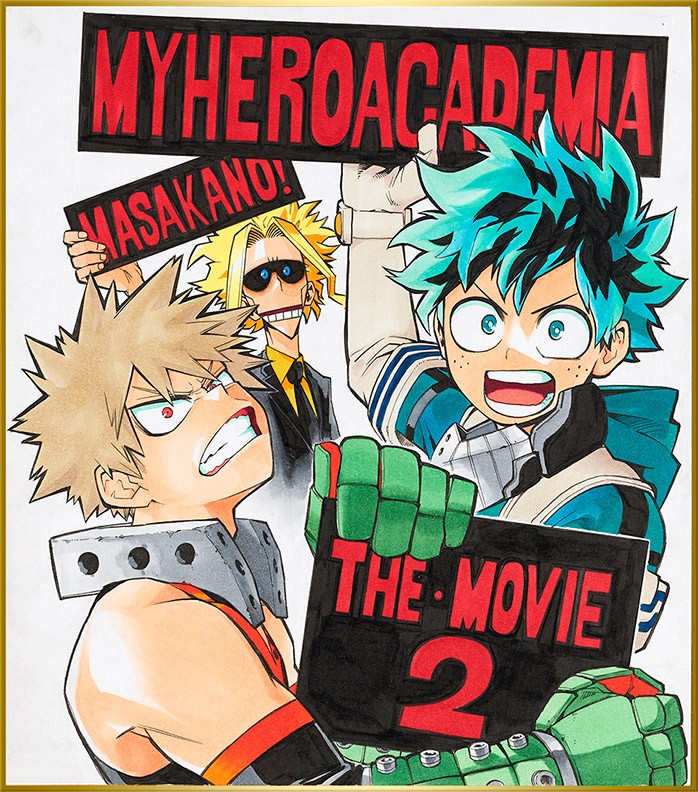 This weekend was an absolute flurry of announcements from this year’s action-packed AnimeJapan event, but this announcement seemed to slip under the radar somewhat. During Saturday’s My Hero Academia stage event, a second movie was confirmed for release this winter.

Confirmation of My Hero Academia movie two outside of the stage event came via the movie’s website, a PV and this week’s Weekly Shonen Jump. The announcement was also accompanied by the usual celebratory illustration from series creator Horikoshi Kouhei:

All Might holding up a sign at the back saying “For real?! (Masakano)” truly sums up my reaction to the announcement. It’s barely been a year since the first movie launched last summer, and yet Studio BONES are already moving forward with a second theatrical project. I’ll also point out that this is on top of the already highly anticipated fourth anime season set to air this October.

If anything, this proves how massive the series has become. Big box office receipts last year have no doubt pushed BONES into trying for a repeat performance this year. Indeed, Horikoshi in his comment attached to the special illustration says as much, as he thanks fans for coming to see the movie and turning “one” into “two.”

The same staff from the last movie are returning for this new movie, including Nagasaki Genji as director, Kuroda Yousuke writing the scripts and character design being supervised by Umakoshi Yoshikoshi. Hayashi Yuuki will also be providing the music once more. The fact that BONES have managed to assemble four very busy people once more can only mean two things – either that they’re very passionate about the project, or that the movie has actually been in production ever since the first one finished.

To be honest, either one of those possibilities could be the case. While the first movie My Hero Academia: The Two Heroes wasn’t exactly a masterpiece, there was clearly thought and effort put into the production of the film as it featured some very impressive animation cuts. And with the same staff on board this time around, all I can hope for is that they’ll maintain the same level of quality despite Studio BONES’ already hectic My Hero Academia release schedule.