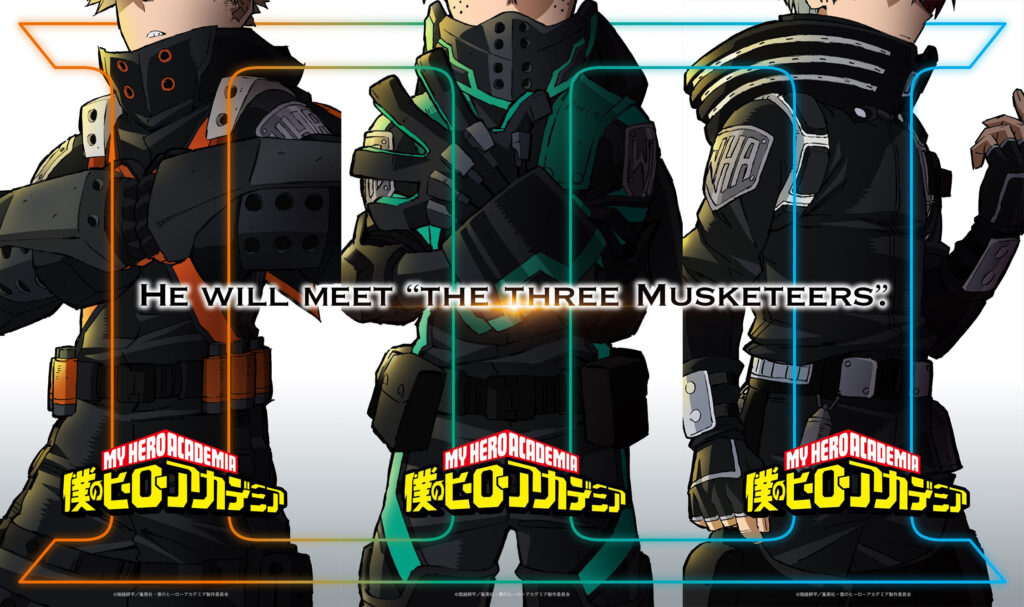 Hot on the heels of the latest trailer for My Hero Academia season five, the series’ official Twitter accounts have unveiled a mysterious new anime project. Leading fans on a merry goose chase, a new visual can be pieced together along with a ominous-sounding tagline. Reading ‘He will meet the “three musketeers”,’ the full visual can be found above.

As to what this new My Hero Academia anime project actually entails, there’s no concrete information. All we know is that it will be something to do with Studio BONES’ animated series, as the characters of Deku, Bakugo, and Todoroki are depicted in the anime’s art style. Their costumes aren’t like anything we’ve seen in Kohei Horikoshi’s original manga, so it probably isn’t an adaptation.

Given that season five of My Hero Academia has already been announced, we can probably say that this ‘Three Musketeers’ project will be an anime film. It seems unlikely that Studio BONES would embark on such an enigmatic marketing campaign for a simple OVA, and the TV series hasn’t featured a large amount of anime-original content. This is probably a teaser for a new My Hero Academia movie.

This is further reinforced by the Roman numeral III that the images spell out when pieced together, which means three. There have already been two other My Hero Academia movies, so it would make sense if this was the sequel to 2019’s Heroes Rising.

Yet, this could also be in reference to the ‘Three Musketeers’ of the image’s tagline, so we can’t say for sure. Several others have also pointed out that the ‘WHA’ emblem on the characters’ left and right shoulders could stand for ‘World Hero Association’ (that would make sense given that our heroes traveled overseas in previous films) but that is pure speculation.

This mysterious ‘Three Musketeers’ My Hero Academia anime project will no doubt be unveiled sometime in the future.