Looking Back At The Joys Of My Neighbor Totoro 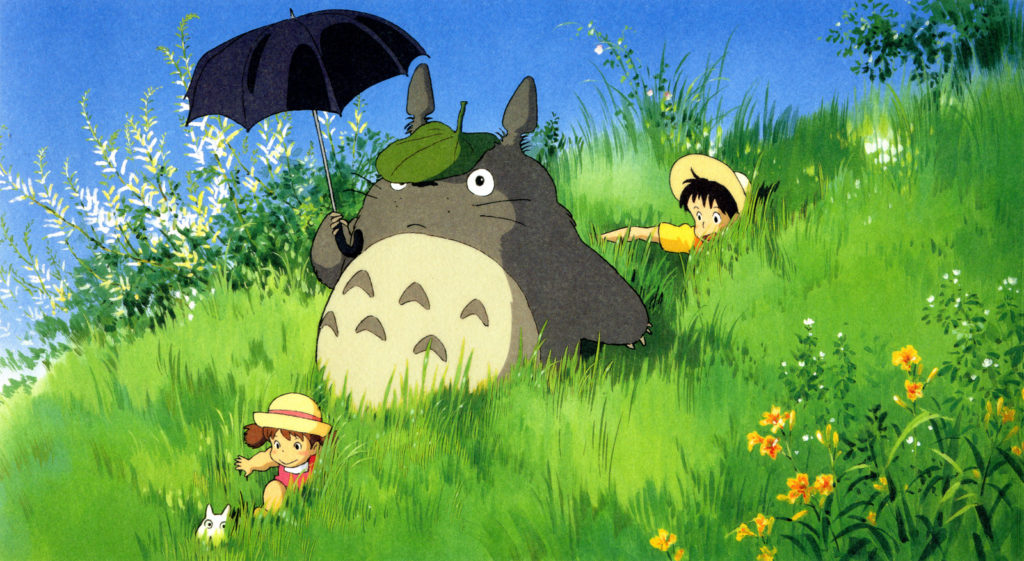 Everyone has a different answer when you ask them ‘what’s your favorite Studio Ghibli movie’? Some prefer raw emotional tales told in Princess Mononoke, others get caught up in Spirit Away’s sweeping coming of age narrative every time around, and you even have contrarians out there who will yell at you when you say ‘What? I’ve never heard of Only Yesterday’.While everyone’s answer for favorite Ghibli movie will vary, most people in the English speaking side of the world have the same answer for the Hayao Miyazaki movie that they hold the most Nostalgia for.

My Neighbor Totoro was the first of his films to gain a strong international following, worming its way into the VHS collection of many young children the majority of whom had no concept of what anime was. It’s a film parents would rent at blockbuster and unlike a lot of the ‘family films’ in the 90s, they wouldn’t mind watching this ecologically and familial themed tale again and again. Now that we’ve all grown up, you’ll catch the younger generations doing the same thing, just without the Blockbuster.

Despite now being a whopping 32 years old My Neighbor Totoro, which originally aired as a double feature with the harrowing Grave Of The Fireflies, is just as magical today as the day it came out. Anyone telling you that they’re too old to kick back and watch Totoro is either lying or probably not worth hanging out with honestly.  All these years later the Totoro himself remains the most identifiable character in the Oscar-winning Ghibli line up and we’re sure the big friendly nature spirit will remain a friend for us all for years to come.

A Brief History Of My Neighbor Totoro In English

Believe it or not, the first English dub made for My Neighbor Totoro was produced exclusively for Japan Airlines so customers making the 13-hour trek to and from America could enjoy some actual, good on flight entertainment with their bad food. Back then, Hayao Miyazaki was a household name in Japan but in 1988 it’s not like Ghibli was a player on the world stage in the way they’ve become since. The first home release of the film, which used this Japan Airlines dub produced by Streamline Pictures, wouldn’t come out till five years later when Fox released it on VHS in 1993.

Through word of mouth that Fox release gained Totoro a big American audience but it was Disney who would swoop in on the rest of the Studio Ghibli catalog, eventually relicensing Totoro and giving it a dub using actual sisters Dakota and Elle Fanning for Satsuki and Mei. GKids kept the dub when they issued out My Neighbor Totoro on Blu Ray, which is also the dub you’ll hear in theaters when GKids hold their yearly Totoro screenings.

Totoro has made an additional big appearance in American cinema, with a noticeable cameo in PIxar’s Toy Story 3 which featured a gigantic Totoro plushie in one of its shots. Another little bit of additional trivia, two twin Cars in one of Pixar’s Cars movies are named Satsuki and Mei. While in their original film they’re not twins, just regular sisters, it’s still a nice nod to a beloved classic.

The Cast Of Totoro Have Stayed In Our Hearts For Decades

Like any of the prestigious Hayao Miyazaki films, or any memorable movie if we’re being honest, this cast of characters who’ve all fallen on some hard times continue to inspire us all these years later with how they persevere despite the hand life dealt to them. As fun as it is to see the Totoro in My Neighbor Totoro do their thing, we think it’s important to salute Satsuki and Mei for holding it together while their mother recovers.

Satsuki really has to hold it down, something fierce for someone who is only 10 years old. Her mother’s in the hospital and her family just moved to the boonies to be close to her, not  something most pre-teens have to deal with. More than that, her little sister Mei is so young that Satsuki basically has to become a secondary mother figure to her out of necessity.

Getting to run around with the Totoros is secretly an extra joy for Satsuki because she’s old enough to know how crappy her situation is but young enough to still take in the magic of the world.

Mei’s young enough that she still can’t fully grasp the significance of her mom, being in the hospital and why her family had to move. Not to say she doesn’t understand it all as she clearly misses her mother Yasuko, but out of everyone in the Kusakabe she’s relatively the most carefree, enjoying exploring her house and the nearby woods. Her fooling around outside and penchant for wandering off when she shouldn’t is what leads her to meeting the Totoro spirits in the first place.

Two young girls, a brand new house in the sticks, and a wife in the hospital whose recovery isn’t guaranteed, Tatsuo Kasukabe has a lot on his plates as the father in My Neighbor Totoro. He does a pretty good job all things considered for someone put in such a dismal situation. Maybe he would take some comfort if he knew his house was haunted by soot spirits and that his girls were being looked after by monsters in the woods.

Poor Yasuko has it pretty bad throughout My Neighbor Totoro. While her daughters are off on big nature adventures with living teddy bears that can materialize giant trees from the earth like it was the easiest thing in the world to do, she’s stuck in a hospital bed with the mysterious anime coughing sickness that plagues so many characters across our favorite stories.

Satsuki and Mei’s mother only shows up a few times throughout the film herself, but she’s more of a main character in the story through her absence than her presence. The home the girls and their Dad move into at the start of the film feels empty without her around, and you can instinctively feel them always wishing she was home throughout the film.

My Neighbor Totoro never makes it quite clear what the Totoro exactly are nor where they originally came from. Of course we can conclude the Totoro are some kind of forest spirits, though there’s still a lot of mystery. Are the three we see in the movie the only ones, or are they a whole species of mythical animal populating forests all over the world?

For being the characters in the film’s name, they’re more of a mascot than they are central to the film’s story.

Maybe you wouldn’t call The Catbus a character in the proper sense, but being one of the most famous Ghibli mascots maybe next to Totoro alone we had to include them on the list. A visual delight and one of many of Hayao Miyazaki’s creations that prove his genius time and again, My Neighbor Totoro wouldn’t be the same film without the many-legged bus. Wanting to help the girls out in a time of need, The Catbus only stays with us for a little but leaves an impression that lasts a lifetime.

My Neighbor Totoro On Netflix… Outside Of Japan, Canada, and yes The United States

You may remember a slurry of clickbait articles coming out in early 2020 saying that all of the Studio Ghibli movies were coming to Netflix. Ironically enough the announcement came just a few days after a different slurry of articles hit the net stating in big bold letters The Ghibli Films Would Never Come To Streaming Services. Months later, you realized you never saw My Neighbor Totoro, Howl’s Moving Castle, or Castle In The Sky pop up on your Netflix recommended queue.