What is – Nadia: The Secret of the Blue Water 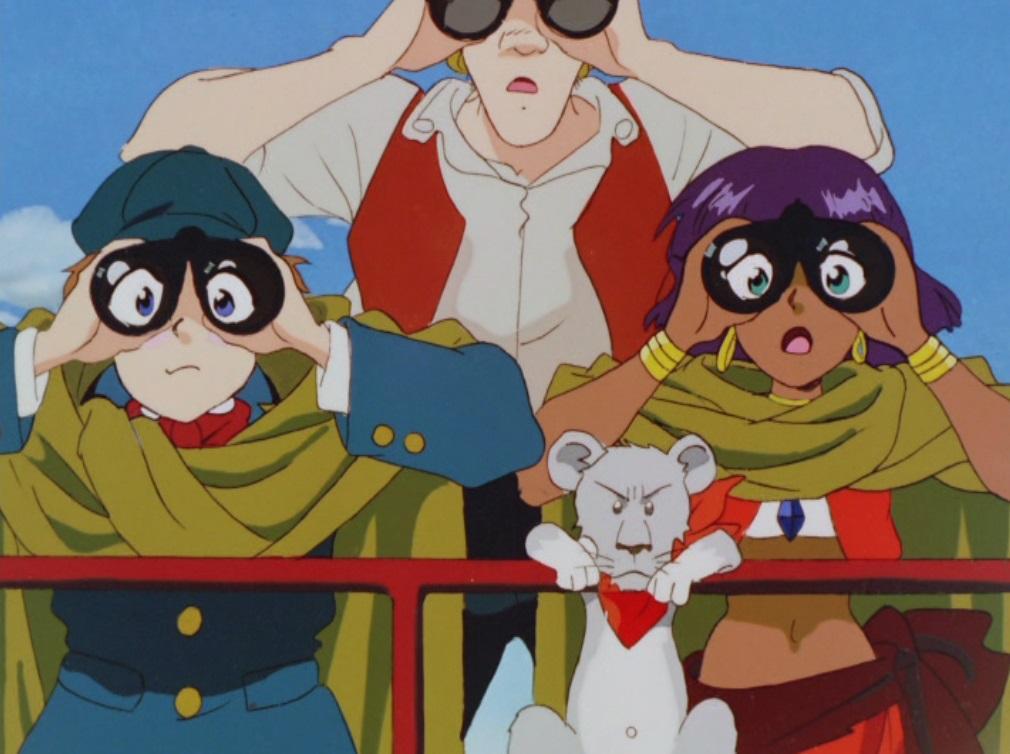 Nadia: The Secret of Blue Water (ふしぎの海のナディア), which literally translates to “Nadia of the Mysterious Seas” is an anime which takes its concept from the popular book, “Twenty Thousand Leagues Under The Sea”. It is about an inventor named Jean and a previous circus act named Nadia who is looking to return to her hometown in Africa.

The series was created by NHK, Toho, and Korad based on a concept from Hayao Miyazaki which was directed by Hideaki Anno from Gainax.

Its initial run was broadcasted from 1990 to 1991 and spanned a total of 39 episodes broadcasted on Japan’s NHK network. In the United States, the work was broadcasted on ADV’s Anime Network, and released by Animatsu Entertainment in the UK. It also received a re-release on Blu-ray and DVD in March of 2014 via Sentai Filmworks thanks to a re-licensing agreement after ADV closed its doors.

The origins of the series date back to the mid 70’s when Hayao Miyazaki was hired by Toho to develop a new TV series. Miyazaki based his story on the “20,000 Leagues Under The Sea” story. Where the initial proposal was never produced, Toho retained the rights to the story Miyazaki created.

The Story of Nadia: The Secret of the Blue Water

Nadia’s story takes place in an alternate universe where she is an orphaned teenage acrobat searching for her father near the turn of the 19th century. While she is in France performing for the circus, she meets a genius inventor from her own time, Jean-Coq Raitique. They share in many adventures after Nadia is rescued by a mysterious submarine, the Super Sea Cruiser Nautilus, which leads them to discover an ancient conspiracy that could quite possibly threaten the entire human race.

Their adventures span across the world, under the seas, as well as other planets while aboard the “Super Sea Cruiser Nautilus”. Including a run-in with a band of jewel thieves called the “Grandis Gant” led by Grandis Granva.

The Troubles that Nadia Faced

While it eventually came to fruition, this doesn’t go to say that Nadia didn’t have its fair share of turbulent water to deal with. During production, Gainax was going through an internal power struggle when the project was coming about causing some troubles within the company regarding the title.

The estimated cost to produce the title in the end, however, would cause Gainax to lose money on the production which caused them to summon a meeting with NHK. Initially, Hiroaki Inoue was on board and provided character designs and storyboards to be presented, however, due to the hemorrhaging of funds, Gainax demanded that Inoue be removed from the project or they would back out completely.

Furthermore, Yoshiyuki Sadamoto was initially on board to be the director of the series later backing out to focus on design and animation. By the completion of the series Gainax’s total loss was about ¥80 million Yen ($800,000) and held no rights to the animation.

The company, however, was unable to make the project come to fruition and ended up backing out causing them to have to repay back the initial advance which they couldn’t completely pay back until the success of the immensely popular series, Neon Genesis Evangelion.

Final Thoughts – Nadia: The Secret of the Blue Water

Where Nadia did have its internal qualms and almost didn’t even see the light of day, we’re glad that it did and fans sure are too. The series has won several awards in the Animage Anime Grand Prix in 1991 including the award of ”Best Work”.

If you haven’t taken the time to watch the series, we recommend that you do. It’s available to purchase on DVD on Amazon for a very fair price.

It’s dark over-tone but optimistic clarity pretty much sets the stage for series such as Neon Genesis Evangelion. These roles would go on to pave the way for Gainax and its storytelling. It’s not a huge series, only spanning a total of 39 episodes and one movie.

If you really really want to get into it though, there are also 7 video games which were released between 1991 and 2005. Get ready to swim with the fishes, everyone!