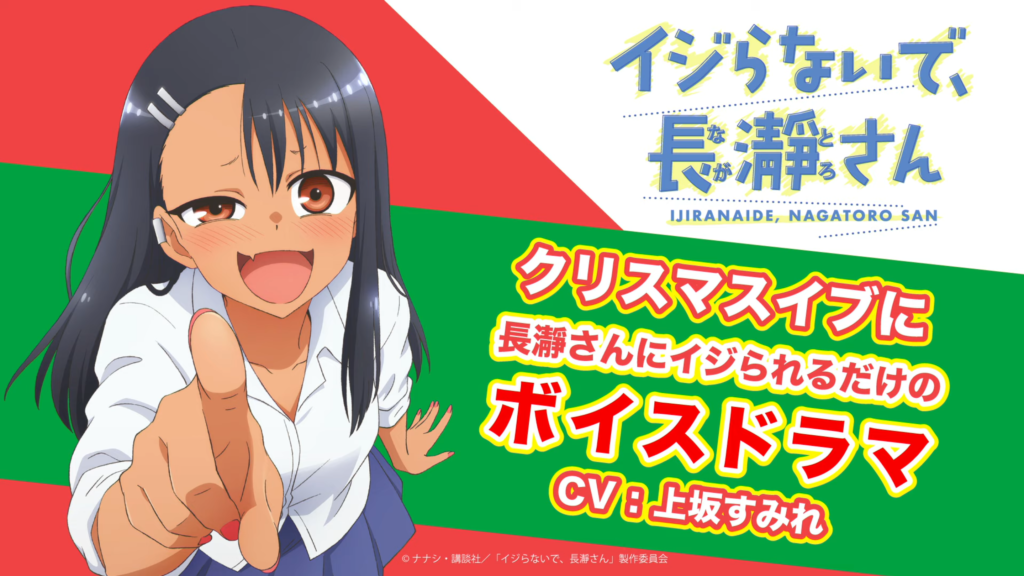 If you’re reading this alone on Christmas Eve, then chances are that you’re not in a relationship. Hah! Pathetic. Or, at least, Nagatoro from the upcoming Please Don’t Bully Me, Nagatoro anime sure thinks so: the series’ latest voice drama, performed by Sumire Uesaka, chastises the viewer for close to three minutes straight for being alone on this special night.

That might sound a little strange to us foreigners, but Christmas Eve is generally regarded as one of the most important days for couples in Japan. Much more so than Valentine’s Day, it is when couples show their appreciation for each other and, yes, exchange gifts: trying to eat in any restaurant on the 24th is basically a fool’s errand, as everything is booked up.

Of course, there is the supposed tradition of eating fried chicken and Christmas cake on the 25th, but that’s not as widespread as you might think. When I was studying abroad in Japan, I even had classes on that day! No matter which way you spin it, Christmas is very different in Japan.

In any case, this latest Nagatoro voice drama makes the titular character’s views on the audience (addressed as the character Senpai) being alone on Christmas Eve. She says that his ‘only hope’ is to ask Santa for some presents, but then goes on to joke that he probably asked for some ‘pervy books’ (doujinshi). Her ‘dere’ side then comes out (the series leans very hard on both sides of tsundere, hot and cold) when she says that she would show Senpai her Santa outfit if he really wanted, claiming that it might do him some good since he’s always looking at anime girls instead of the real thing.

Ouch, that one hurt.

One phrase that constantly comes out in this Nagatoro Christmas voice drama is kuri bocchi (alone on Xmas), which is also trending on Twitter in Japan right now as this article is being written. This clearly shows that this is a widespread phenomenon in Japan, or at least the Japanese-speaking internet, as people complain that they don’t have dates on this special day. Whether that’s something to worry about or just false expectations formed by consumerism, we’ll never know.

If your interest has been piqued by this Christmas voice drama, then the Please Don’t Bully Me, Nagatoro anime will premiere in spring 2021. The manga is also available to read via Vertical.

other William Moo 53 mins ago