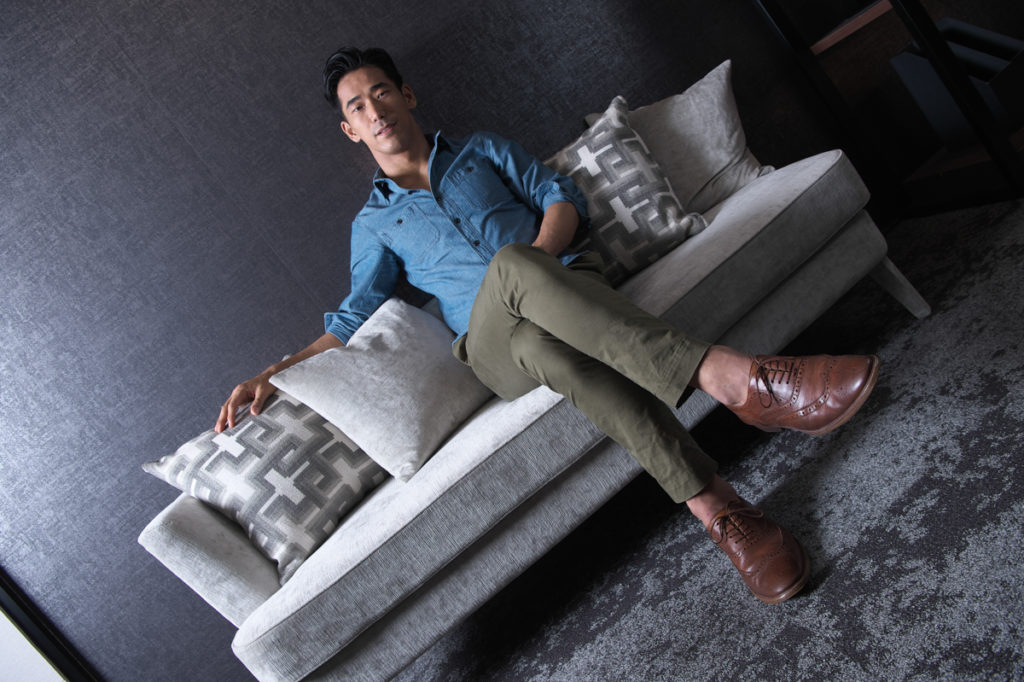 Naoki Kobayashi is known to most fans as a member of EXILE and J SOUL BROTHERS III, but besides his activities as a dancer, he’s a talented martial artist, swordsman, and actor. Starring in his first English-language role as Teiji in Wash Westmoreland’s upcoming film, “Earthquake Bird”, Naoki Kobayashi is taking is talents global. I recently had the opportunity to sit down with him ahead of the Netflix release of “Earthquake Bird” on November 15th, 2019 and ask him about his experiences with the role and what it was like on set for his first internationally focused project. But that isn’t all, he upped the ante on our interview by also providing an exclusive peek at his appearance on the red carpet at the BFI London Film Festival premiere for the movie. Check it out!

Eddie Lehecka: I want to start off by congratulating you on the movie. I had a chance to see it and I thought it was great, you did a fantastic job in it. So I’ll be focusing on the movie for this interview. Starting off, how does it feel as an actor to be in a movie like this that’s being supported by Netflix as your first English language role?

Naoki Kobayashi: Yeah, this is my first English speaking role it gave me the chance to work with Netflix, Scott Free, director Wash Westmoreland who did “Still Alice” and “Colette”, some amazing movies, then Oscar winner Alicia Vikander, and Riley Keough. The whole experience was just awesome for me as an actor but also as a person.

I was inspired by a lot of international films before doing this, so I hope that this could have that same kind of inspiration for people who live all over the world. It’s an idea that’s beautiful to me.

Eddie Lehecka: You had an opportunity to meet Ridley Scott, can you tell me what that meeting was like and what it’s like to meet someone like him?

Naoki Kobayashi: So this role was something I got from auditioning with the producers and Wash (Westmoreland). After I got the role, I visited Scott Free Productions (Ridley Scott’s production company) after I finished the shoot and that’s where I met him. We talked about a lot of things like films he directed, and amazing Japanese actors like Ken Takakura and Yusaku Matsuda and their masterpiece “Black Rain”. We also talked about the Japanese entertainment industry and the Tohoku earthquake. We talked about a lot of things like that, and he was interested in hearing my opinions.

Also, at the London Film Festival premiere, we met again and he said “The movie was awesome, you have a strong presence. You should keep pursuing international projects as an actor.” Hearing that from him was really an honor for me, and it made me realize that this is really just the beginning of my career as an actor.

Eddie Lehecka: That leads really well into my next question. You have a history of performing in stage plays in Japan and have done some films as well like “Tatara Samurai” and “HiGH & LOW”. Was there anything about working on an international production like this that you found surprising or difficult in comparison to your other experiences?

Naoki Kobayashi: English is not my native language and I had to train a lot there, but acting is acting no matter what the language is. So there was a trusting relationship between myself and Alicia, the other actors, and Wash. I was surprised about having a compliance meeting, covering things like harassment and political correctness. So before the shoot, we had a meeting about that, it was new for me as a Japanese actor. 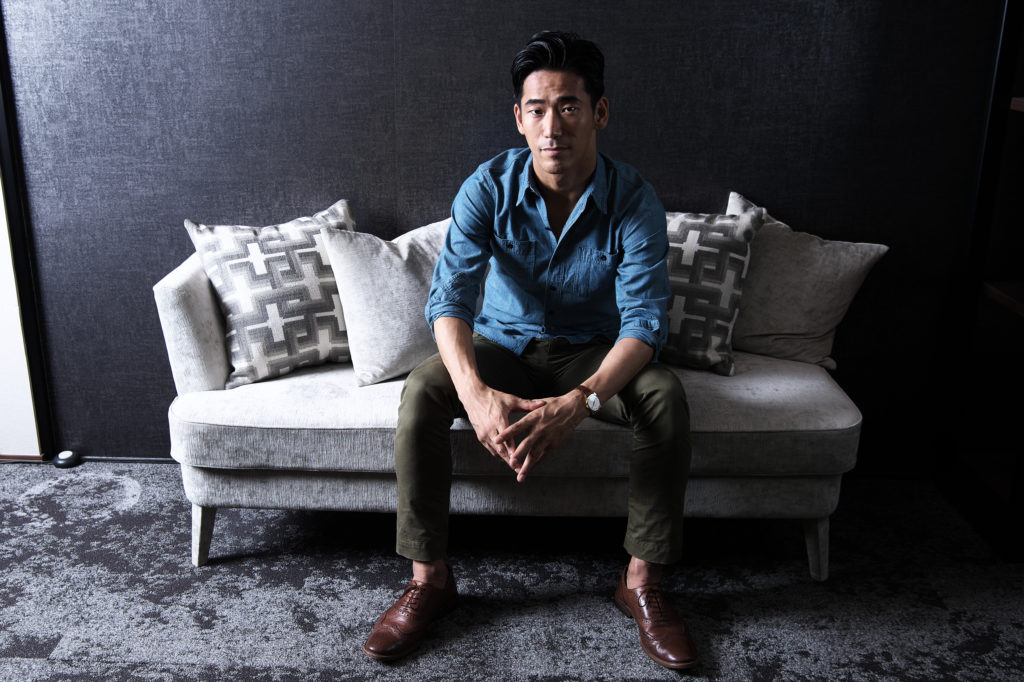 Eddie Lehecka: Next I wanted to ask a little bit about your working relationship with Wash Westmoreland. What did you think of him as a director, what was it like to work with him on this film?

Naoki Kobayashi: He’s so generous to everyone and he gave me the freedom to shape the character. This story is about Tokyo in 1989, so being the only Japanese actor in the main cast I gave him my opinion about Japanese traditional thoughts and customs, and we discussed how they fit into the story and impacted the character of Teiji. So we built those kinds of things in the film together.

Eddie Lehecka: What was it about the character of Teiji that interested you and made you want to take the role?

Naoki Kobayashi: I felt an empathy with Teiji from the very first time I read the script. He seems to be mysterious but I actually don’t think he really is. He has his own values and follows his truth. I could understand that part of him, and sometimes I felt like “this is very similar to me”. So I was able to find a connection between myself and Teiji’s character.

Eddie Lehecka: That’s really interesting, I found Teiji to be mysterious for sure. A very quiet character. In my experiences with you though, you have an energy about you and always seem very upbeat. Did you find it difficult to tone it down for the role and be subdued like that?

Naoki Kobayashi: Actually, I have both sides to me (laughs). Especially when I’m not working I’m a very calm person. Also, the way I tried to understand his character turned out to be something familiar to me. I have over 15 years of experience as a dancer. When working on this role I tried to learn the whole process of photography, developing the film, taking photos, printing, etc. I also went to Teiji’s hometown, Kagoshima in Kyushu, and I explored the kind of places featured in the novel and script. So it really felt a lot like a workshop to become Teiji, to feel his environment, feelings, the air. Building his character felt a lot like the process of dancing, I was dancing as Teiji.

Eddie Lehecka: You mentioned earlier about how The Earthquake Bird is set in 1980’s Tokyo. Did you find anything filming in a familiar backdrop to be beneficial for you as an actor in the role, outside of the help you provided Wash in the development process?

Naoki Kobayashi: As I had said, I’m the only Japanese actor from the main cast. Also, my character, Teiji, is a Japanese photographer. These things gave me the idea that I should be “me” at the same time as playing Teiji because that would be something only I can do, and the strongest benefit I can add to the film. I knew the atmosphere, culture, smells, the air, I could use being me. But at the same time, the way of thinking in the role was that of Teiji. But nevertheless, my experience in Japan was very useful for me.

Eddie Lehecka: So the movie is based in Tokyo but it’s based on an international audience. In the west, there’s a very stereotypical view that Japan is this exotic place, but I feel like the movie gives a more truthful representation of Tokyo. How do you as both an actor and a Japanese man hope people respond not only to the movie but also the side of Japan that’s shown through this move?

Naoki Kobayashi: I’m not the director so I don’t want to get too deep, but Wash has lived in Japan and he has great respect for the country. I feel that there is much authenticity in the film and it’s one of the most important elements of the film. This story is a noir thriller in 1980 yet it also has a message about the relationship between people living in a modern age. Those people are also searching for their own meaning of “who am I”? The main 3 characters all have an intense relationship and face each other seriously. The title “The Earthquake Bird” is also a metaphor that I feel means “a warning”, and I think it implies that people should think about “what am I really saying”? What is your truth, what are your values. So I hope that after watching the movie people will be talking about themselves, reflecting on themselves, and trying to understand the bigger meaning of things.

As you know, I was born and raised in Japan but working on this film has also given *me* a new perspective on Japan. We have a unique culture, customs, and characteristics. So we as Japanese people should be using that as a strength to explore more outside of Japan. As people, in business, those kinds of things. I hope that we can find the future of Japan and our better life in this way.

Eddie Lehecka: The Earthquake Bird is a thriller, and other films you’ve done have had a dramatic kind of tone. What’s the next genre of film you want to challenge?

Naoki Kobayashi: Marvel. (laughs) That’s one of my dreams. I have experience doing action, martial arts, and samurai sword fighting, so I need Marvel to make a samurai hero for their movies. I also love human drama. I would also like to do a murder mystery or detective movie. I like the idea of doing an interrogation scene with 2 people, one camera, and a lot of dramatic dialogue.

Eddie Lehecka: To wrap everything up, do you have anything you’d like to say or a message you want to send to the English speaking readers of this interview?

Naoki Kobayashi: I belong to 2 Japanese music groups, EXILE and J SOUL BROTHERS III, and this is my first English speaking role. So I’m fortunate to have perspectives on both sides of the industry and the culture, and I would like to be an ambassador of Japanese culture and thoughts for the world. If you’re interested please follow me, I would love to show you new things from Japan!

We want to thank Naoki Kobayashi for taking the time to sit down with us and conduct this interview, as well as provide the look at the film’s premiere! If you’re interested in following more of his career and seeing his unique perspective on Japan you can find him on Twitter and Instagram.