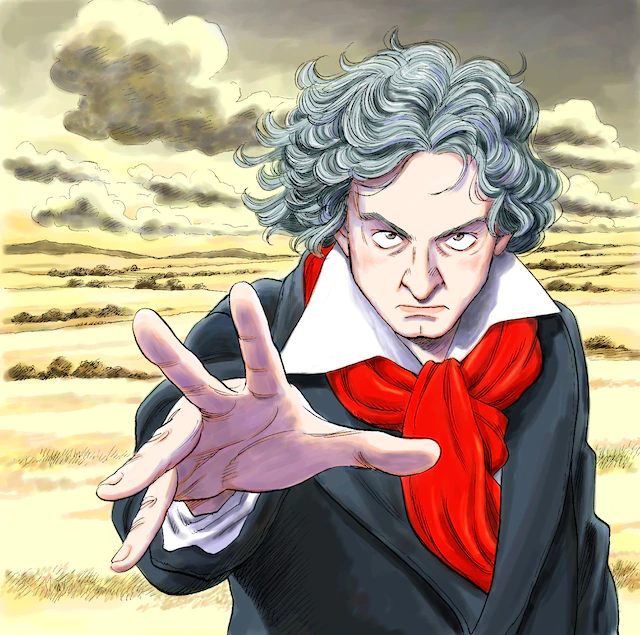 Toss this one in the ever expanded list of unexpected crossovers from the last few years, like Hello Kitty x Mobile Suit Gundam and the excellent One Piece x Cup Noodle ads. To celebrate the legendary composer’s 250th Anniversary, a campaign entitled ‘Listen To Beethoven’ will oversee a series of concerts, record releases, and other products based on the work of Ludwig Van Beethoven. Not to be disrespectful, but we never thought we would cover Beethoven on this sight unless he got turned into a virtual idol and toured around with Hatsune Mikune or something. However another legend in his own right, Monster and 20th Century Boys creator Naoki Urasawa, was tapped to provide the key image for this campaign.

Naoki Urasawa has always been a huge music aficionado, and in fact has been known to record tunes from time to time himself. His seminal manga 20th Century Boys largely incorporates the revolutionary power of music as a prime motivator throughout. Even if his personal tastes swing more towards classic rock, we couldn’t think of a living manga artist better suited to capture Ludwig Van Beethoven than the Eisner winning Urasawa. Look at the striking work Naoki’s done; you can almost hear the piano compositions from the famed composer’s fingertips.

The ‘Listen To Beethoven’ campaign isn’t the first time Naoki Urasawa’s been asked to contribute his pen-based talents for a cause. Before their postponement, he asked to illustrate for the Tokyo Olympics among other odds and ends over the years. He’s still working hard as ever making manga though, currently serialization the second part of his Asadora series which centers around a young girl and a mysterious monster attack with some conspiratorial elements. There’s a reason some call Naoki Urasawa the greatest of all time and if you haven’t read the likes of Pluto or Monster, we assure you it’s a good use of your quarantine time.