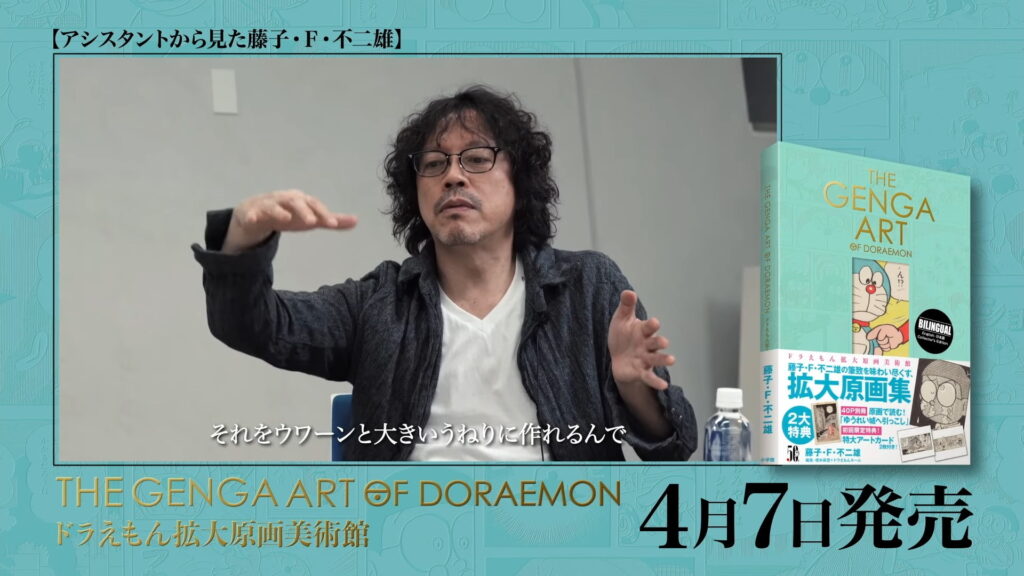 Naoki Urasawa has teamed up with Shintarou Mugiwara for a new series of videos discussing the legendary Doraemon, meant to promote the series’ forthcoming genga artbook on 7 April. Mugiwara was once Fujiko F. Fujio’s chief assistant, and even took over some art duties once one half of the duo, Hiroshi Fujimoto, passed away in 1996.

The first part is up now on Shogakukan’s official YouTube channel: in it, Shintarou Mugiwara speaks largely about his perspective on the series from the inside, but Naoki Urasawa had plenty to offer to the Doraemon discussion, too.

First, they talked about the attractiveness of Fujiko F. Fujio’s art: for Naoki Urasawa, it’s the simplicity, with characters such as Doraemon depicted with just a few lines. Next, Urasawa quizzed Mugiwara on what Fujio (Hiroshi Fujimoto) was like as a person, curious to know if he was a harsh critic. Mugiwara answered in the negative, although he said that some of his handwritten feedback could be a little scathing.

Taking a look at some of the actual, original manuscripts Fujio had offered Mugiwara feedback on, Urasawa disagreed, saying that ‘sometimes you have to be this tough when judging someone else’s work, otherwise it doesn’t have an effect.’ He admits that he’s usually pretty demanding of his assistants, but has found his demeanor softening somewhat ever since he and his team shifted to remote work.

Finally, Naoki Urasawa was curious to learn about what kind of relationship Fujio and Mugiwara had while working on Doraemon. The former assistant said that while they didn’t have many chances to talk at work given that they worked in separate rooms, they often met on the bus and went out together. He noted that Fujio was often making a ‘difficult face’ instead of a bright one: Urasawa empathized with this, saying, ‘He had to think up a new invention for every chapter, after all.’

The Genga Art of Doraemon releases on 7 April. The second part of this Doraemon discussion between Naoki Urasawa and Shintarou Mugiwara will also go live then.