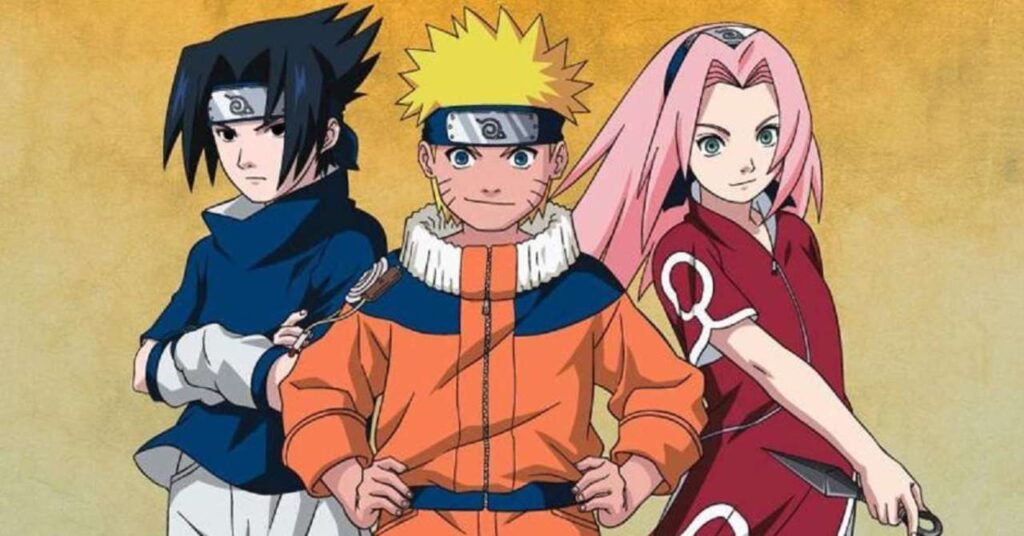 Based on the manga series by Kishimoto: Karakuri (1995), the TV series Naruto aired from 2002 to 2007. The viewer is drawn across a story of a young ninja looking to strengthen his knowledge and abilities to lead and become the hokage.

His story is told in two parts, in his pre-teens and then his teenage years. His dreams of becoming a leader and searching for recognition in his village positions him as an approachable underdog trope that the audience quickly appeals and can relate to.

Beyond the numerous forms of merchandise and figurines of Naruto, this anime series and character is unique and has drawn scholarly attention and praise by many anime/manga publications. Although perhaps comparable to a juvenile or stereotypical character from other manga, many have been drawn to his personality and character development. 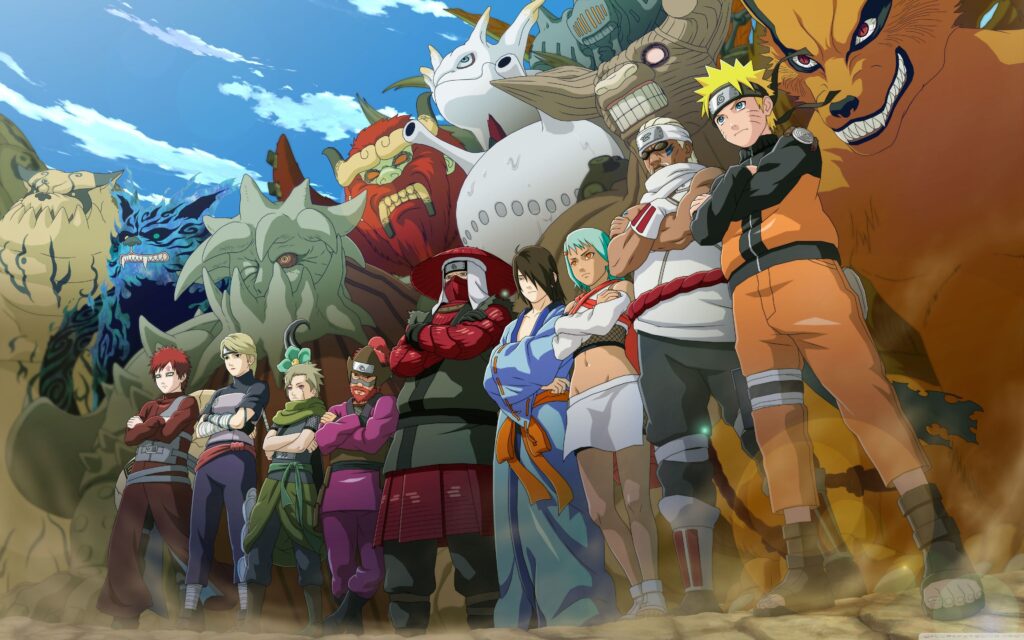 With such popularity and fan acclaim, the world of Naruto is well beyond the scope of the page. Released in the summer of 2016, the online gaming world offers the player an immense range and scope for the story to continue and to partake in the action. It is entirely based in the Naruto universe and is the very first and only Online Naruto RPG in the world to be licensed.

Beyond the enjoyment of interacting with the universe, players get to continue the story, in addition, to meet and play with five new characters. Players have the option of choosing one of these characters and igniting new quests, challenges, and experiences. It features the 9 arcs of the Naruto storyline for players to go through and explore, including notable spots such as the Village Hidden in the Sand and the Valley of the End.

An amazing testament to the masterful artistry on not only animators and writers but all the creators who have taken this universe and been inspired to further create more ways of engaging and being a part of the Naruto saga,

The story will only continue in Naruto Online!

The Quest and Challenges of Naruto Uzumaki

Naruto Uzumaki is the protagonist from the village of Konohagakure. Originally under ridicule from the village because of the account with the Nine-Tailed Demon Fox—a malevolent creature that attacked Konohagakure—and then was locked inside of Naruto’s body. Despite this, he perseveres to be the village’s leader, the Hokage.

His carefree, optimistic, and boisterous energy helps him to befriend other ninjas from Konohagakure and the surrounding regions. He finds the support and acceptance from his teacher Iruka Umino, who he views as a father.

He is able to successfully learn the multi-shadow clone jutsu to create multiple clones of himself and then has finally become a ninja. He joins the ninja group, Kakashi Hatake, and is able to make friends and find community.

lightness that make him a favorable and easily likable hero. Perhaps it is silly nature or the endearing backstory that positions him so, but also to a certain extent, the viewer can resonate and find virtue in the struggles of his character, the earnest drive, and dream to achieve more than is expected: to defy the odds.

His journey mirrors the viewer to reflect and see the hope and persistence of tackling the circumstances, the ridicule, and finding strength in intuition and individuality. 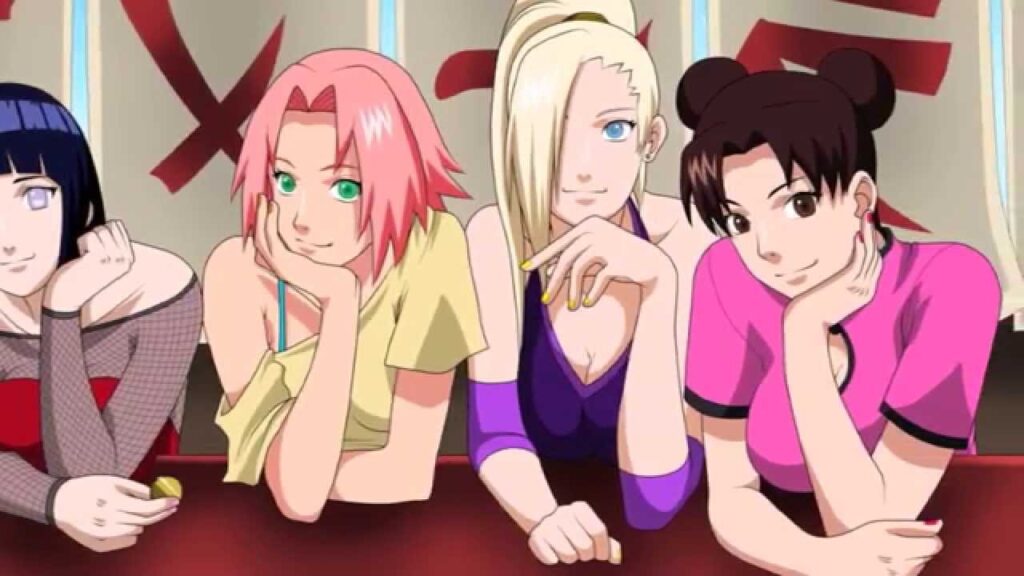 In addition to the sequel series, Shippuden, which premiered in Japan in 2007 and ran through 2017 after 500 episodes, there were 11 full-length films created off of both part one and part two released between the years of 2004 and 2015.

Naruto the Movie: Ninja Clash in the Land of the Snow was the first released movie and centers around Naruto, Sasuke Uchiha, and Sakura Haruno. They watch a film starring Yukie Fujikaze, in preparation for a mission to protect the actress during the production of her new film.

She is revealed to be Koyuki Kazahana, a princess from an island known as the Land of Snow and Doto Kazahana, her uncle who killed her father, after her. Naruto is able to devise a plan and utilize his new Seven Colored Chakra Rasengan and take out her uncle. In the end, once the peace is restored, Kazahana returns to her throne.

The breadth and expansiveness of The Naruto universe is an unparalleled imaginative feat across multiple mediums. The quest of one young ninja across a vast compilation of adventures and tribulations gives the viewer so many lessons and philosophies on the hero’s journey.

A Series Breakdown and Overview

In the beginning episodes of Naruto he can appear to be bratty and rebellious, acting out and coming off as rather annoying. We accompany this ninja in training us are watching in his journey by the other characters that appear equally immature. Sakura Haruno, the cherry blossom haired female ninja circles around being a lovestruck and distracted girl. Then there is Sasuke Uchiha, who is dubbed Naruto’s rival and the most talented ninja at their school whose stereotypical bad boy persona and energy just feels overdone and irritating. Despite this initial reaction, there is actually much more to the series beyond childish and ridiculous antics.

Although our main character Naruto can be mischievous at times, he has much more depth than that or being an orphaned boy who is disliked by most of the village. The inherent spell that seals the powerful Nine-Tailed Fox into Naruto is a continued dynamic.

Although the show is centered around the life, progress, and journey of ninjas, there is a really dynamic and interesting plot that changes rapidly. It shows all the different elements of evil, Naruto’s inspiring transformation from being something of a rabat to a more inspired leader and the dark forces that waver within Sasuke Uchiha. The plot twists are remarkable and unprecedented; However, the main plot is engrossing and really worth recommending. In contrast to the more intense and serious aspects of the ninja training and conflict elements, there is a really enjoyable juxtaposition with slapstick humor and comedy imbued into the episodes. The mistakes and trouble that Naruto finds himself in along with Konohamaru (who is the village leader’s grandson) and his mentor Jaraiya (who is a very very powerful ninja) are undeniably hilarious and entertaining. Additionally, the supporting characters are always always enthralled in some rather hilarious situations with nothing less than boastful and over the top humous reactions that are always entertaining to watch on each episode.

In the first series a lot of the anime has what’s called ‘fillers’ where the episodes consists of the characters but involve side plots that have no relevance to the main theme or plot. These episodes are essentially there to add more content, bulk up the show with more episodes and content. Some fans argue to simply skip such episodes as they are unnecessary and take away from the rest of the series. However, they are also equally enjoyable as we get insight into different parts of the ninja world or supporting characters’ backgrounds and usually lots of humor within them.

A cult classic for all anime fans new and old, Naruto is an unparalleled series that intertwines so many aspects with a cast of characters that develop and interact in satisfying and insightful ways. The strongest parts of the series, as it is so long, I would say is the plot line and continued balance of tension and lightness. It is a show that explores many themes on a personal level and world level. The true impressiveness is the way the show shifts and offers the viewer an experience through the series that’s much like being on a wave while different elements unfolding all at once. The integration and successful use of humor and slapstick comedy in the characters not only balances everything, it is entertaining and makes the characters relatable to us outside of this prestige and allure of their honor and mission to become skilled ninjas, we gravitate towards remembering they are also human and make mistakes and are silly with many sides.

I highly recommend Naruto to all anime fans to delve and immerse into his ninja adventures and misfires. It’s almost a cult classic much like Dragon Ball Z and One Piece. It’s definitely a must watch series for all ages and a great classic introduction to the world of anime.