A Guide to All Naruto & Shippuden Story Arcs and Fillers 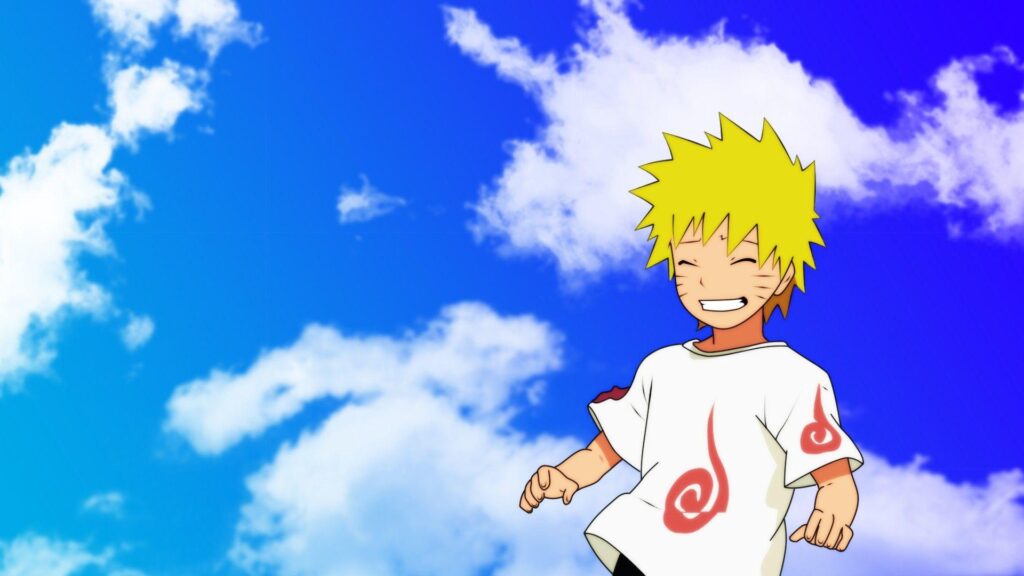 Naruto is an extremely long anime with many, many story arcs. It makes sense, since the anime and its sequel Naruto Shippuden ran for 15 years from 3 October 2002 to 23 March 2017. Along with the series came many story arcs.

In these stories, Naruto goes from ‘number one hyperactive, knucklehead ninja’ to a great hero of the Fourth Shinobi World War and beyond.

Here are all the story arcs in both Naruto and Naruto Shippuden, in chronological order. Which are the best Naruto story arcs, and which are not-so-good?

Naruto’s epic story starts so low and humble, that people don’t even bother to give it a name — it’s just the prologue.

Prologue and Land of Waves

We meet Naruto. He’s a practical joker, unpredictable and sort of a loser. Of course, the audience knows the truth, that Naruto is the orphaned son of a great leader, and that he has the powerful Nine-Tailed Fox trapped inside of him. 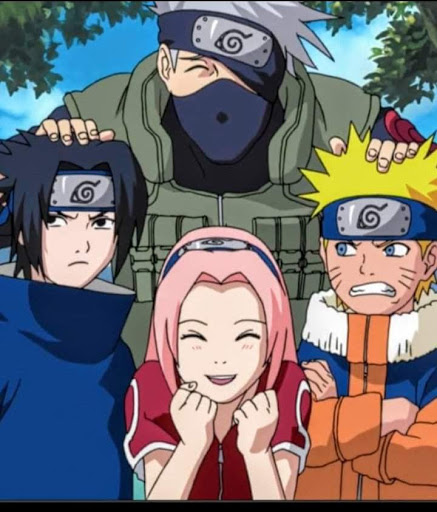 We meet Sasuke, Naruto’s rival, and Sakura, a Sasuke fangirl with a giant crush. These three get tossed together into a team with the elite ninja, Kakashi (all above).

In the manga, we don’t meet a lot of the characters until chapter 34. Ino, Shikamaru, Hinata, etc. get early cameos in the anime.

The Prologue isn’t the best story arc, but it’s fun to watch. If you’ve watched Naruto before, it can be nostalgic watching these characters when they were less serious and goofier. The Land of Waves arc is also the first time that we see Team 7 in action.

Quite a few major characters get introduced in this arc. There are some fun battles here.

Everyone is competing for the coveted chunin prize, and not actually trying to kill each other. As a result, we get to see them show off some awesome ninja moves and clever strategies.

Sasuke also gets his curse mark in this arc.

Two ninjas manage to ‘win’ despite doing seemingly nothing. Naruto passes the written exam with a blank paper; Shikamaru ultimately earns the chunin rank by doing the right thing and forfeiting his match.

This arc is short, but important.

We see several summonings: Orochimaru has snakes, the Third Hokage has a monkey and Naruto summons a couple of toads. We learn about Gaara’s connection to Shukaku.

Jiraiya, the Akatsuki and Sasuke Leaves

The Search for Tsunade

Here we have the first time that Jiraiya teaches Naruto, as the two head out in search of Jiraiya’s former ninja teammate.

We also have the first appearance of Sasuke’s brother, Itachi. Later on, his story will get a lot more complicated, but for now, he’s just a member of the evil Akatsuki.

Sasuke and Itachi have a confrontation, but it’s not yet time for the real battle now. Itachi is more interested in Naruto.

Naruto uses his Rasengan for the first time.

This is a good story arc, as it marks a change in the series. We start to delve into the history of Konoha, and we meet some new enemies.

This is one of many ‘filler’ anime arcs not found in the manga. Because it is filler, nothing of any real importance happens.

Filler happens because the anime production schedule sometimes runs ahead of the manga (presumably, Naruto filler runs with its arms trailing behind it). New anime-only stories have to be created to fill the gaps while the manga catches up.

After a fight with Naruto, Sasuke leaves Konoha.

He leaves because he wants to be strong enough to fight Itachi. Naruto has been making a lot of progress, and Sasuke feels like he hasn’t. Orochimaru offers Sasuke a deal, and he takes it.

Of course, Naruto isn’t ready to let Sasuke leave just quite yet.

The retrieval mission itself is a bit formulaic. Each member of the retrieval team has an evil counterpart. The Sand Village trio (now on the good guys’ side) has to come in to help.

There’s a fun bit where we discover that Rock Lee is quite good at Drunken Fist martial arts, best known from a couple of Jackie Chan movies.

Naruto fights Sasuke, and we see Naruto’s demon fox cloak for the first time. The mission is a failure, but now Naruto is determined to get stronger and bring Sasuke back.

This is also one of those rare times that we see that Sakura actually does care about Naruto.

The end of this arc sets the stage for the timeskip and Naruto Shippuden. Naruto goes off to train with Jiraiya, while Sakura trains with Tsunade. 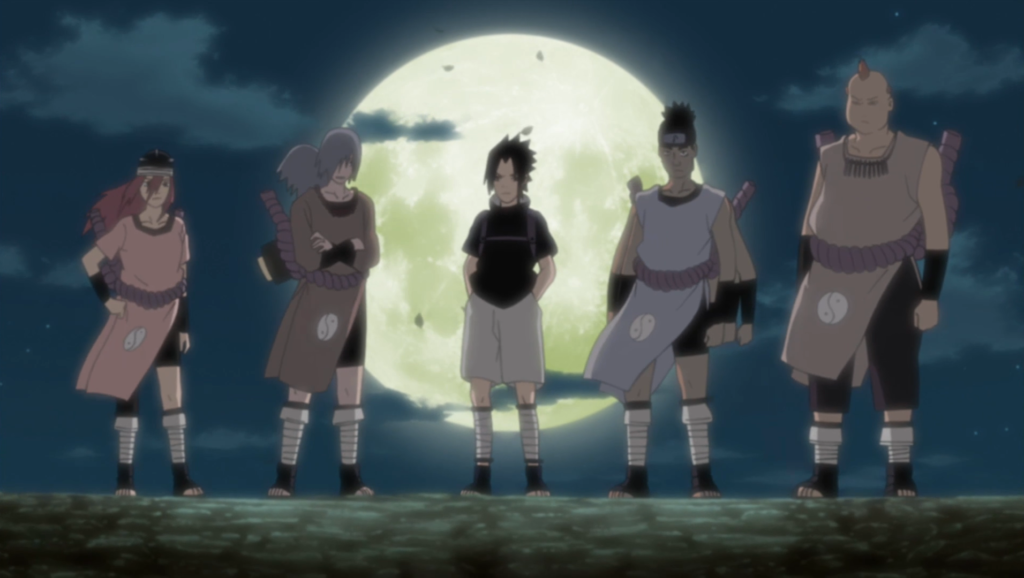 At this point, the anime goes into a long march of filler episodes and filler arcs. The filler isn’t well liked in the Naruto community.

The filler isn’t necessarily bad. They tend to throw Naruto in with odd combinations of other ninjas where he normally wouldn’t belong — Naruto and Team Guy; Naruto, Lee and Sakura; Naruto and Team 8, etc.

The filler episodes can be quirky and funny (Ino impersonates a princess). But if you skip the filler, you won’t miss anything. Here are all the filler arcs:

Before we jump into Naruto Shippuden, the manga gives us a story about young Kakashi. This story will appear later in the anime.

Kakashi is teammates with Rin and Obito Uchiha. Rin is the Sakura of the trio. Although Obito is an Uchiha, he’s more like a young Naruto.

Obito dies (at least as far as anyone knows…) 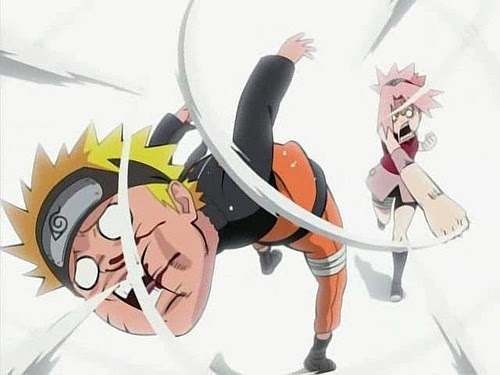 There’s some silliness at the beginning, where we are reintroduced to the characters. Naruto is stronger, and Sakura packs a powerful punch. Naruto still has the ‘sexy no jutsu.’

Gaara is captured by the Akatsuki. They take Shukaku from him.

The goofy, likable villain Tobi shows up. Enjoy him while you still can, before the big twist is revealed.

The Akatsuki are collecting tailed beasts.

Naruto and Sakura get a new teammate, Sai. Sai is a big jerk, and he’s also connected to the untrustworthy Danzo.

The team also gets a new leader, Yamato.

Naruto gets dangerously beastly with a four-tailed fox demon form. We also meet Sasuke again, who has gone further down the path to the dark side.

We meet more of the Akatsuki. Asuma, the leader of Team 10 (Ino-Shika-Cho), dies in battle with the Akatsuki.

Team Kakashi and Team 8 join forces to track down Itachi. Naruto finds him, but is unable to do anything but talk.

Orochimaru’s henchman, Kabuto, has absorbed some of his old master’s power.

Pretty much everything from this point forward is pretty epic, except for the filler stuff.

Tale of Jiraiya the Gallant

Jiraiya tracks down Pain, the leader of the Akatsuki. They battle. Pain reveals his plan. Instead of collecting Infinity Stones, Pain is collecting tailed beasts, so he can wipe out entire nations.

Tobi tells Sasuke the secret history of the Uchiha Clan. Tobi claims to be actually Madara Uchiha, rival to the First Hokage.

The Uchiha Clan was powerful. Itachi was spying on it. Learning this makes Sasuke hate Konoha. 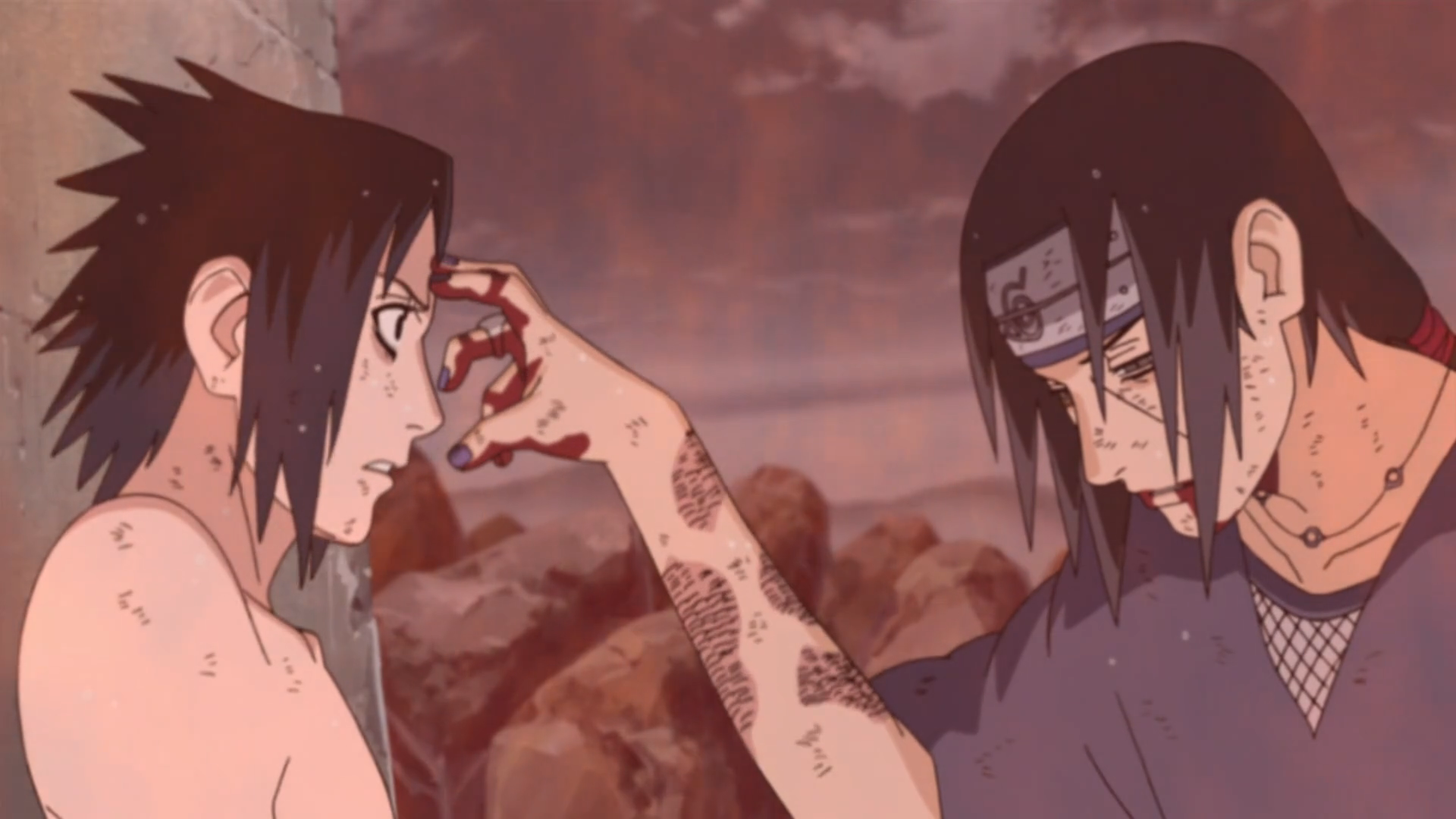 Pain attacks Konoha, searching for Naruto. He is still training away from the village. Danzo kills the messenger sent to retrieve him.

The attack on Konoha leaves behind a crater.

Pain pins down Naruto. Hinata attempts to protect him, but fails. Naruto gets angry enough to lose control of himself.

Naruto is about to release the full power of the Nine-Tailed Fox when he is stopped by the Fourth Hokage. The Fourth reveals that he is Naruto’s father.

Naruto calms down and talks with Nagato, the real leader behind the assault. Naruto convinces Nagato to bring back many of the ninjas who had died in the battle.

Naruto finally gets the hero’s welcome that he had wanted.

Past Arc: The Locus Of Konoha

The reconstruction of Konoha begins. Danzo is named acting Sixth Hokage while Tsunade is recovering.

The five great ninja nations hold a summit at a neutral location, the Land of Iron. Naruto wants the Raikage to not hunt down Sasuke.

Unfortunately, the summit is interrupted — first by Sasuke’s team, and then by Tobi. Danzo flees the meeting after it is revealed that he was trying to manipulate events.

Tobi wants Naruto and Killer B, the host of Eight Tails. The four remaining leaders are ready to go to war to stop the Akatsuki.

Kakashi ends up as the de facto leader of Konoha. Sasuke kills Danzo in battle.

Back home in Konoha, Naruto’s friends decide that the time has come to kill Sasuke. Sakura volunteers to tell Naruto. Sakura tries to get Naruto to give up on Sasuke.

Sakura then tries to kill Sasuke. Sasuke fights Kakashi. Team 7 is ‘reunited’ with a fight between Naruto and Sasuke.

A lot happens here, and it can be hard to keep up. There are a lot of battles, some ninja history, and flashbacks.

Kabuto emerges as a real threat, with the ability to bring ninjas back to life. Kabuto forms an alliance with Tobi and Zetsu.

Kabuto’s power means that he can control dead kages and other powerful ninjas — including Itachi and Nagato.

Itachi is freed from Kabuto’s control, and can now help the good guys. Sasuke kills the original White Zetsu.

Kabuto reveals that he has revived the real Madara Uchiha.

There are battles involving the various jinchuriki (humans with tailed beasts), and with the kages against Madara. Sasuke and Itachi team up against Kabuto. Orochimaru returns.

Tobi is revealed to be Obito. Kakashi fights Obito, with a lot of trips down memory lane.

The Ten Tails is almost complete, and Obito becomes its jinchuriki.

Orochimaru joins the good guys, and Team 7 is reunited 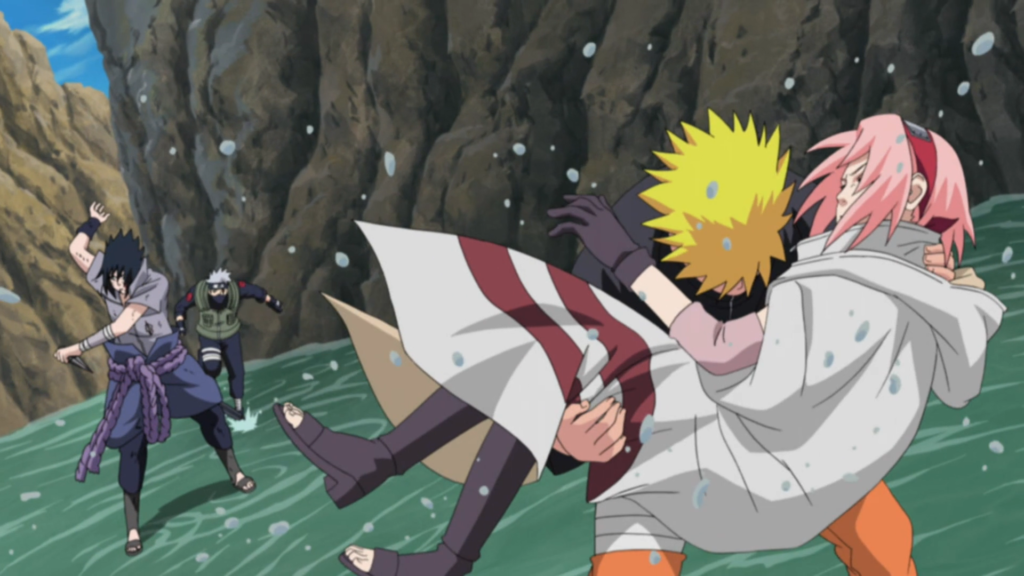 Paradise Life On A Boat

Kakashi’s Anbu Arc: The Shinobi That Lives In The Darkness

Birth of the Ten-Tails Jinchuriki

Obito takes a new form as a jinchuriki. He starts to prepare the Infinite Tsukuyomi. This will trap everyone in a dream world.

Naruto and Sasuke fight together to save the world. They are joined by the entire Allied Shinobi Force, including quite a few reformed bad guys.

Obito looks ready to end the war, but he is forced to bring Madara back to life. Madara becomes the new jinchuriki for Ten Tails.

Naruto and Sasuke both nearly die. Nine Tails is removed.

Naruto and Sasuke get help from the Sage of Six Paths. They learn that they are the reincarnations of his sons. 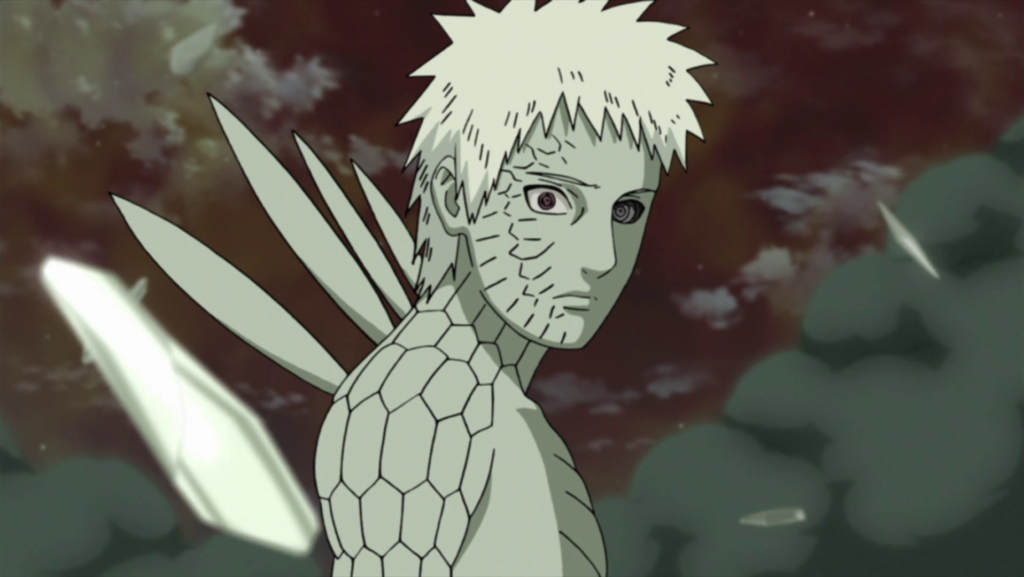 Jiraiya Shinobi Handbook: The Tale Of Naruto The Hero

This is the conclusion to Naruto Shippuden.

In the end, Team 7 saves the world. Dead heroes say their final goodbyes.

Sasuke has one last trick up his sleeve — to kill the kages and take control of the tailed beasts.

Naruto and Sasuke have one final fight. Sasuke concedes that Naruto has won, and heads off in search of redemption.

This arc adapts the light novel of the same name

This arc adapts the light novel of the same name.

Konoha Hiden: The Perfect Day For A Wedding

The last episodes of the anime. 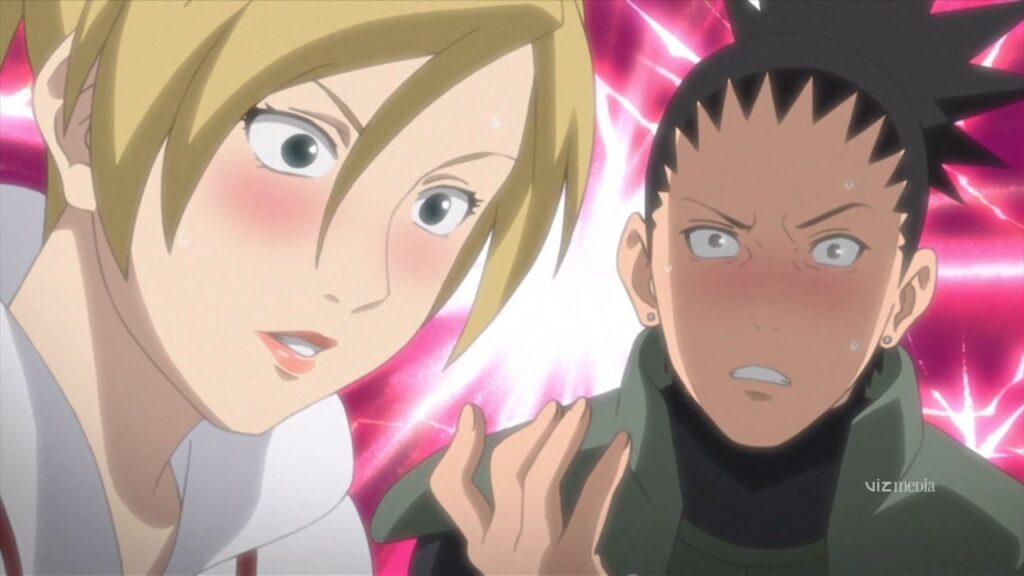