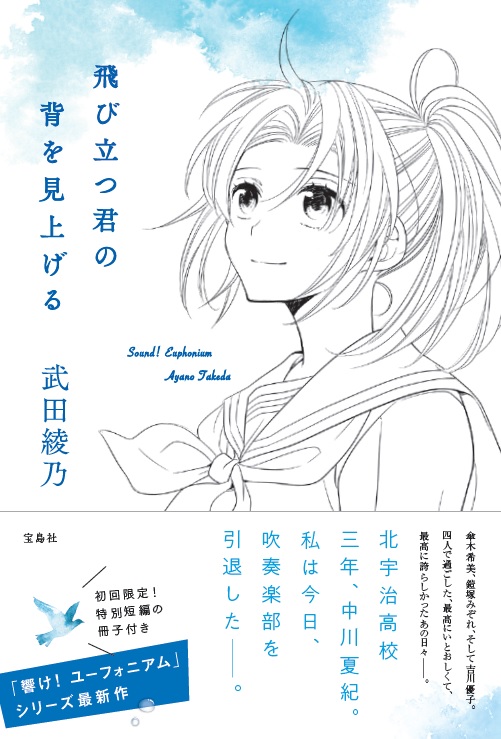 Novelist Ayano Takeda has written a spin-off to her Sound! Euphonium light novels. The new book is titled Tobitatsu Kimi no Se o Miageru, translated as You Leap, and I Look Upon Your Back. The new novel will come out on 13 February. The novels are the source for the Sound! Euphonium anime and manga adaptations, so fans of the high school band series may find them interesting as well.

Instead of focusing on euphonium player Kumiko and her friends, the new novel features one of the other euphonium players, Natsuki Nakagawa. As a senpai to the main girls who has her own story, she’s been a popular secondary character in the series.

‘One day I wanted to write a story with Natsuki Nakagawa as the main character, but it finally took shape!’ Takeda said in a press release from publisher Takarajimasha. ‘Although it is positioned as a spin-off work of the Sound! Euphonium series, I tried to write it as a story as a youth novel without compromising on quality. I think it’s a beautiful work… thank you!’

At the beginning of the series, Natsuki Nakagawa is a second-year student at Kita Uji High School. However, she is a senior in the new spin-off novel (Japanese high school is three years).

The first edition of the spin-off novel will come with a short booklet, ‘Illuminations of Memory.’ The booklet features Nozomi Kasagi, another older girl who is one of the main characters in the spin-off.

Yen Press has the light novels in English, although that doesn’t necessarily mean that they will pick up the spin-off as well.

other Jeremy Tauber 6 months ago

Sound! Euphonium Wants You To Take The Census