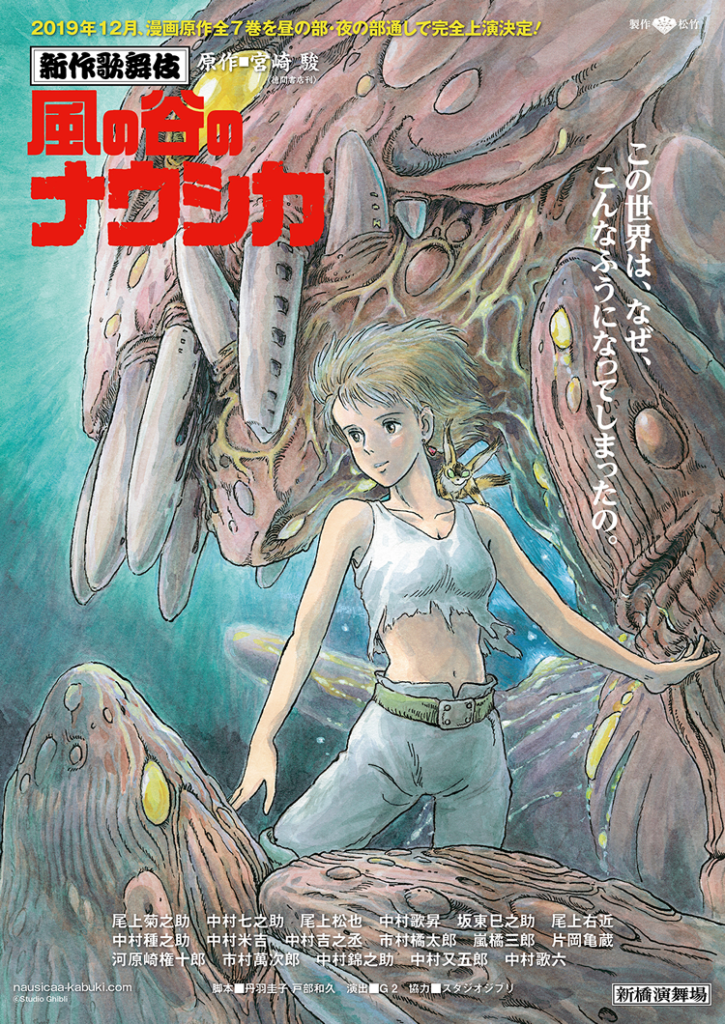 Ever since the upcoming Nausicaä of the Valley of the Wind kabuki play was announced to adapt the entirety of Hayao Miyazaki’s original manga last December, one question has been on my mind. Why? Why would Miyazaki endorse a kabuki play as the first complete adaptation of his story, and not an animated film or TV anime? The answer, it seems, may be more superficial than first thought.

Kabuki actors Onoe Kikunosuke V and Nakamura Shichinosuke II, who will be playing the roles of Nausicaä and Kushana respectively in the play, joined Studio Ghibli co-founder and producer Toshio Suzuki for a special press conference on the Nausicaä of the Valley of the Wind kabuki play ahead of its premiere in Ginza this December.

As it turns out, Miyazaki has turned down many other offers for adaptation in the past – including a Hollywood live-action movie. This is because Nausicaä in particularly holds a special place in Miyazaki’s heart, no doubt stemming from the fact that the 1984 film lead (in part) to the foundation of Studio Ghibli and that completing the original manga took Miyazaki over a decade.

Suzuki therefore never expected that Miyazaki would give his blessing to the Nausicaä kabuki play, a project which he himself instigated almost five years ago. Yet – to Suzuki’s surprise – Miyazaki agreed to give the project the go-ahead, but he had two conditions.

The first condition was that the title was not changed. The second was that Suzuki do all of the press conferences, interviews and coverage for the kabuki play – including the one during which this information was shared.

Given that Miyazaki is currently at work on his latest film, an adaptation of Genzaburo Yoshino’s Kimitachi wa Dou Ikiru ka (How Do You Live?), this second condition is perhaps warranted. However, the first condition is more superficial and thus hard to decipher – it’s hard to tell whether the title really means a lot to Miyazaki, or if he was just being pedantic.

Perhaps kabuki’s special place in Japanese culture was what prompted Miyazaki to support this project over a Hollywood movie. Or, perhaps it was the passion and enthusiasm of the team behind the Nausicaä kabuki play in particular that swayed him – something which can be easily understood when taking into account the cast’s comments on the source material and how they’re planning to bring it to the stage.

Onoe Kikunosuke V (playing the lead role of Nausicaä) had high praise for the original manga’s “deep themes” concerning “problems with war, energy, the environment, nuclear weapons and genetics” and was excited to bring them to the world of kabuki.

The team have also been working with staging company G2, who were also behind the recent Naruto kabuki play, in employing the latest technology to bring the story to life. In particular, Kikunosuke highlighted their use of cranes to adapt the many scenes of flight present in the original story. They also managed to convince legendary composer Joe Hisaishi to let them use some of his iconic music for the 1984 film.

So while the exact intentions of Hayao Miyazaki in letting a kabuki stage play, of all things, be the first complete adaptation his original Nausicaä manga remain unclear, we have at least a little insight into how the project came to be. However strange in concept, I must say that I’m looking forward to seeing how the Nausicaä kabuki play turns out.

The Nausicaä of the Valley of the Wind kabuki play will run from December 6 to December 25 in the Shinbashi Theater in Ginza. Tickets and more details can be found via the official website.