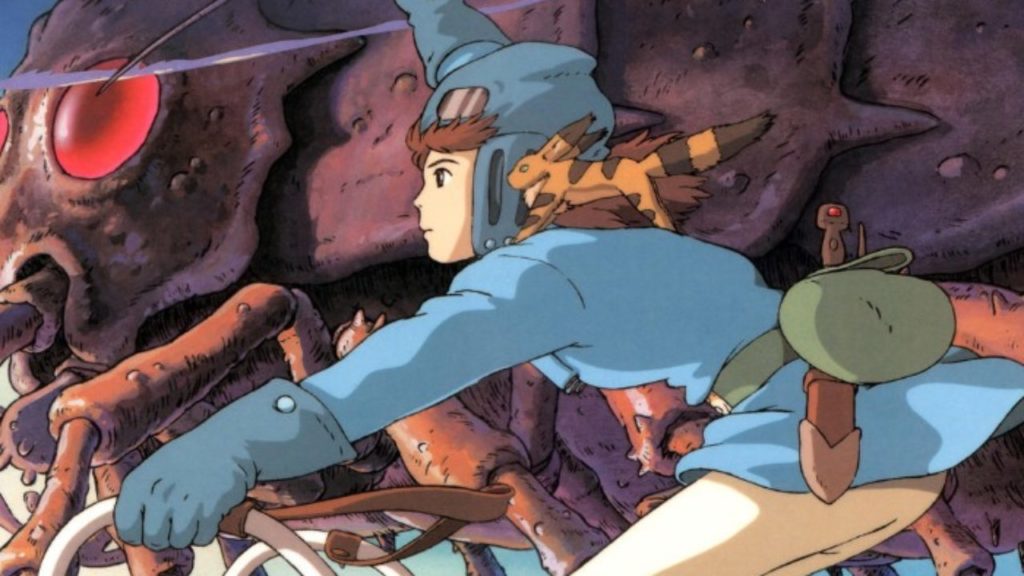 Everybody has their own favorite Hayao Miyazaki. Like your favorite fast-food establishment and your favorite soda, it’s a deeply personal opinion and they’re all valid answers. Taking words like best or favorite out of the equation though, we can commit to saying the Nausicaa Of The Valley Of The Wind is perhaps Hayao Miyazaki at his most ambitious.

You had warring nations, an entire fantastical world filled with unique designs, and Hideaki Anno of Evangelion fame animating something called The God Warrior. No wonder this was the film that cemented Hayao as the most notable anime director of them all and while you’re free to your own thoughts about it, you have to give the transformative piece of cinema the credit its due.

Why Nausicaa Was Unlike Any Movie To Ever Come Before it

So Nausicaa Of The Valley Of The Wind gets credited as the first Studio Ghibli movie, making it by default a game-changer as it started the legend. That’s all pretty much true but if we’re being technical Nausicaa was created by the team who would go on to form Studio Ghibli shortly after.

Hayao Miyazaki, Toshio Suzuki, and Isao Takahata made the work at the now-defunct Studio Topcraft. The animated film was made on a bigger scale than arguably any Japanese animation to come before it, both in concept and execution. Even the Miyazaki and Takahata early works like The Norse Prince and The Castle Of Cagliostro weren’t made quite on the same scale. It did so well that Miyazaki and co were able to buy out Topcraft and reform it into Studio Ghibli after the fact.

The Story Behind The Original Manga

Miyazaki started serializing Nausicaa Of The Valley Of The Wind in Animage years before he would direct its own movie adaptation. A similar situation to Akira, the manga version offers a more in-depth story that also both acts as an incredible companion piece to film and stands up as its own accomplishment.

However, here’s where Nausicaa differs; Miyazaki only started the manga in hopes to eventually get it animated. Unlike Akira, Nausicaa first existed as a movie pitch but at the time studios and investors wanted to adapt bestsellers instead of taking risks on the unknown. Not having established Ghibli at the time, Miyazaki didn’t yet have the clout to do whatever he wanted and so he set out to make Nausicaa a hit manga so he could eventually animate it.

Who Were The Nausicaa Characters Who Set The Stage For Most Ghibli Movies To Follow?

Hayao Miyazaki’s work at Studio Ghibli is the stuff of legends. Nevermind anime fans or those with an invested interest in Japanese pop culture, he’s one everybody’s favorite directors. Part his appeal, of course, is the magic he imparts in all of his animations. There’s nothing quite as satisfying as looking at a Ghibli.

However, it’s not just his pen to paper abilities that have touched audiences over the years. He’s routinely and consistently created characters that buck the mold and have shown great inner strength his entire career.

Furthermore, the majority of his leads tend to be and have largely been since Nausicaa extremely competent females in a scene where that’s been uncommon until more recently. Let’s look at some of the movie’s cast that opened doors for everything to come.

Of course there’s the titular Nausicaa herself. Studio Ghibli’s first heroine, the courageous and adventurous princess rode the skies, befriended the giant Ohmu everyone else was terrified of, and put her body on the line more than once to try and keep the peace. She strives for a better world where people wouldn’t fight with one another, a theme Miyazaki would revisit time and again.

Nausicaa Valley Of The Wind didn’t only feature an incredible woman lead, it also puts an extremely powerful lady in the antagonist position. Kushana wants to expand her territory and eliminate the dangerous Ohmu once and for all. It leads her to committing some atrocities, but she did so in order to better the lives of her people. Complex and dynamic, Miyazaki would do this type of character again in Princess Mononoke with Lady Eboshi.

Compassionate and supportive, Asbel is similar to many of the secondary male characters in female-led Miyazaki movies. Brother to a Princess in a neighboring Kingdom, Asbel meets Nausicaa when both get caught up in the action and helps her out a few times without trying to steal the spotlight. You can see traces of the Asbel character in Castle In The Sky among other Miyazaki works.

Where To Watch Nausicaa Of The Valley Of The Wind?

Itching to rewatch the first studio Ghibli movie? While for a time some of the older Ghibli movies were getting hard to find, thankfully today they’re easier to watch than ever! Whether you want to buy it on blu ray for your home collection or are just interested in streaming because you have an evening to spare, we’ll let you know where and how.

The Studio Ghibli films used to be available in the states through Disney. However last decade Gkids, who’s seemingly become a bigger and bigger player, relicensed them for blu ray release all in one fell swoop. Usually you can grab the Gkids release of Nausicaa on Rightstuf or wherever you buy your anime for about 16 bucks, way cheaper than the Disney editions ever were.

Now if you live in the modern streaming era, depending on where you live there are two different places where you can go to watch Nausicaa Of The Valley Of The Wind or any other Ghibli movie for that matter. After people hypothesized they would never be available streaming, two stunning announcements made in 2019 brought Ghibli into the modern era.

If you live in The United States, sometime in 2020, The Studio Ghibli catalog will be made available on HBO for streaming on their digital platforms. Finally, Prince Ashitaka and Tony Soprano hand in hand.

If you live outside of The United States, Canada, or Japan, so perhaps England, Netflix will be your place to go to stream Studio Ghibli from February 2020 going forward. We don’t know how long either deal will last so get your binge-watching on while you can.