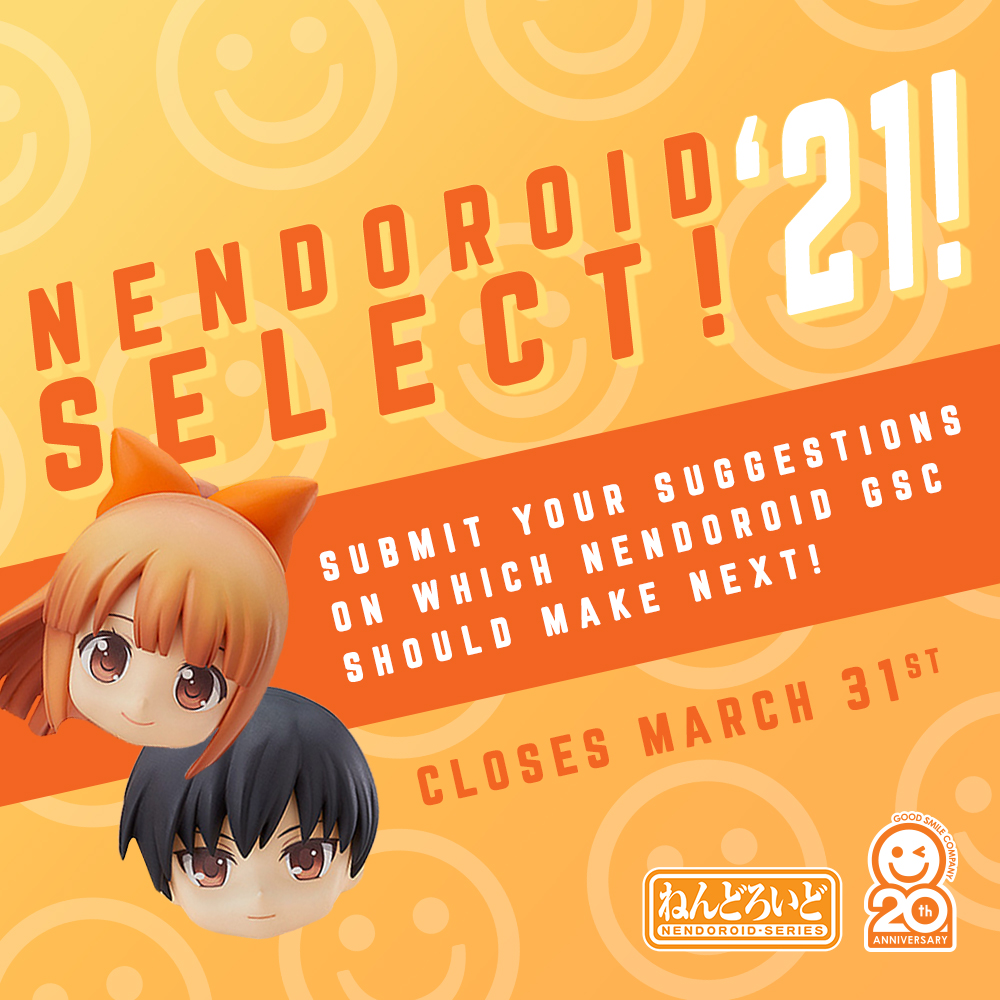 Good Smile Company has a lot to celebrate in 2021. This year marks not only their 20th anniversary but also the 15th anniversary of their highly successful Nendoroid line. As part of their celebrations, Good Smile wants to hear from you in a special ‘Nendoroid Select’ survey.

Open until 31 March, the survey is a chance for collectors to nominate what character they’d like to see become a Nendoroid next, or what they’d like re-released!

Celebrate GSC's 20th anniversary with Nendoroid Select, a special campaign where you can submit suggestions directly to our team for the next new Nendoroid design and re-release! Submit your choices before polls close on March 31st!

GSC’s social media accounts are already filled with suggestions including characters from Danganronpa, Mob Psycho 100, and Pokemon. I am particularly excited at the re-release suggestions, especially given the shocking after-market value some Nendoroids rise to.

For example, one request I submitted is for Fire Emblem Fates’ Elise: originally sold for ¥5,370 (before tax), I’ve since seen it on Mandarake for ¥10,500. In terms of release suggestions, given that GSC recently announced a Thomas the Tank Engine Nendoroid, I’m sure nothing is too random to be considered!

The ‘Nendoroid Select’ survey isn’t just focused on suggestions; it also includes questions about GSC’s Nendoroid Face Maker. The Face Maker is a service run by Good Smile where collectors can design their own Nendoroid faceplates. Currently, the service is only available in Japan and the survey seems to be gauging international interest and how much we’d be willing to pay.

I’ve always had my eye on Face Maker, and they seem largely inexpensive for a customizable service (plates ranging from ~¥1080 – 1480). But if it does ever open its service to international buyers, the real question will regard shipping.

It’s always exciting to see a company reaching out to its market and seeking suggestions. In a perfect world, GSC would publish the survey results, but that’s unlikely to happen. A small cynical part of me does wonder if the whole survey is more a way to test the waters on the Face Maker, rather than really taking on board community requests. Especially given the survey has only been announced on the GSC official English social media accounts.

Nevertheless, it won’t hurt to submit your own suggestions and see what happens… I’ve already submitted ten!