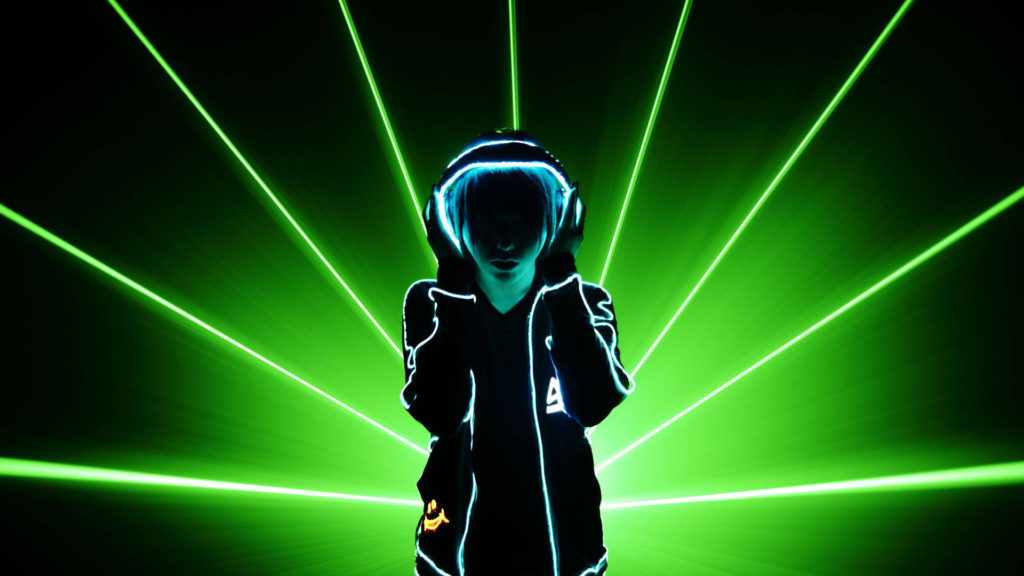 As an artist, Ram Rider began his rapid rise to fame in the mid-90’s after releasing a multitude of popular tracks through independent labels, ultimately leading to him remixing an entire catalog of major artists here in Japan. Making the most of his diverse talents in the fields of DJ’ing, producing and arranging, Ram Rider would quickly go on to carve his own niche within the music industry. Moving forward, you’ll find Ram Rider working alongside some of Japan’s biggest bands and idol groups, with noteworthy acts such as Tempura Kidz even reaching out to him for their greatest hits.

Outside of his expansive catalog of 3 original albums, as well as several singles and official remixes, you’ll often find Ram Rider’s sets filled with a vibrant mix of anime and video game remixes, as well as the underground-defining sounds of Japan’s electronic music scene. Setting the scene for Ram Rider’s sets are his over-the-top laser and LED shows, following the theme of “Sound and Light”. It’s absolutely not something you’ll want to be missing, and Neon District may just be your best place to check it all out.

We had the unique opportunity to sit down with Ram Rider himself ahead of his performance at Neon District, where we discussed his history as a producer, as well as what we can expect to see from his performance at the event. The interview can be found in full below:

You started your career as an independent electronic artist in the 90’s, where you rapidly rose to individual success. Do you believe the Japanese music landscape has changed much since then?

The constant evolution of DJ gear between the ’90s and 2000s was a major catalyst for populating the club music scene. In experiencing the shift between using vinyls to using CD’s as a primary tool for playing out music, we were able to express ourselves a lot more through edits and remixes of music through this new simplified process. Rather than pressing vinyl, we simply had to burn a CD from our own computers.

Between the years 2000 and 2010, I feel like there was a massive growth among the music producer community. Within this boom, there were a lot of individuals who were extremely conscious of international audiences, and would often cater towards them; sometimes even at the cost of ignoring their own domestic audiences. These days there’s endless amounts of incredible production software that can simply be acquired online by anyone, and it’s because of this we’re witnessing a change in the flow of the industry. People are able to flourish in this environment, and anyone could become the next big name in the music world. It’s definitely an extremely exciting era, but it’s also quite a difficult one for those who have been in the game for quite some time. (laughs) It’s the perfect era to be a young person.

Recently you’ve been working closely with more and more external groups such as idols and bands; has this proven to be a challenge, or did it tend to be a natural progression as an electronic artist?

There was this massive Electro House boom in the 2000s, and it was kind of a natural course of action for idols and solo artists to utilize these club sounds in their music. That’s where I came into the picture, it made a whole lot of sense for me to produce for them, which is how I got involved in that side of the industry. These days, J-pop is going in a wide-variety of directions, it’s no longer a simple recipe of creating an EDM or Dubstep track, rather, there has to be a lot more involvement for artists. It can be difficult, but it’s also extremely exciting to create these new sounds for artists.

Perhaps one of the things you’re most known for internationally is your beautifully constructed anime song remixes. Is there any particular song that stands out to you more than anything else?

I’ve created remixes for NIRGILS’ “Sakura”, which was the OP for Eureka Seven, “smile again”, which was a collaboration with studio 4℃, as well as worked on several anime soundtracks here in Japan. Whenever I’m DJ’ing overseas, I like to bring an iconic mix of various well-known video game and anime soundtracks including titles such as Zelda, Street Fighter 2, Metal Gear Solid, and a whole bunch more. I hope you can all look forward to this!

Your live shows are often known for being a laser-filled visual feast for attendees, have you got anything special planned visually for this year’s Neon District show?

I’m currently planning to operate a gorgeous laser performance using a giant cube screen in front of my stage. As far as I know, I’m the only one in the world who does this, and I truly believe it’s an experience that I hope you can all enjoy. Unfortunately however, we’re still trying to work out the logistics of bringing this to the United States, and if it’s not possible, I offer my sincere apologies in advance and promise to give it my all in my actual DJ performance!

Finally, Is there anything you want to say to your fans in the US ahead of your performance at Anime Expo’s Neon District?

Last time I performed at Anime Expo was back in 2013, making this four years since my last performance. This year, I’ll have Taku Takahashi, Teddyloid, and banvox sharing the stage with me throughout the night. These three in particular are artists who I often share the stage with here in Tokyo, which I am very excited about. I feel as though this is as close as we can get to a legitimate Tokyo nightlife environment, so I urge everyone to come along and have fun!