Due to Japan’s nature of being a small island country in the middle of the pacific that just so happens to be smack dab on top of a tectonic fault line, the country’s suffered more than its fair share of natural disasters. People who live there are so accustomed to smaller earthquakes that normally they’ll sleep right through them or keep working without realizing the building they’re in is shaking around them. Still, that doesn’t mean larger scale earthquakes and tsunamis don’t regularly put people’s lives at risk. In an attempt to keep people more up to date with possible danger, a NERV-themed disaster notification app has been released on iOS and will come to Android later. 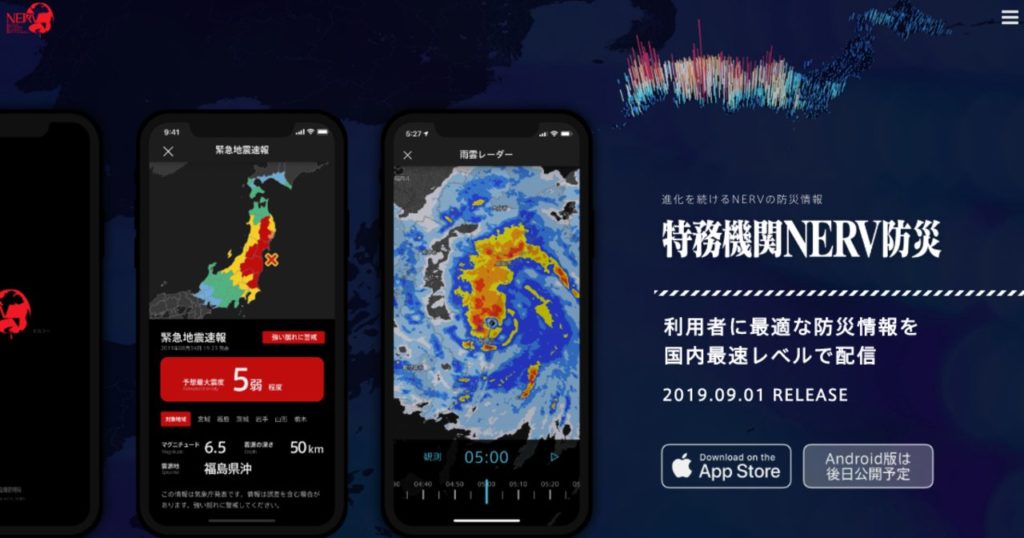 With a long-winded official title that roughly translates to ‘Special Agency NERV Disaster Prevention App’, otaku, salarymen, and grandmas alike can now get their disaster information via the agency that’s dedicated to protecting the earth from the angels. Jokes aside, the app will notify people of earthquake, tsunami, and even volcanic eruption warnings as well as make other national safety information available. For now, this app is only available in Japan but with hugely destructive hurricanes reaching North American shores, I’m wishing an English language version was available too.

NERV, of course, comes from that anime we all know and love Neon Genesis Evangelion. One of the most famous series of all time, it makes sense to dress up a disaster information app in a coating that’ll appeal to a lot of people. It makes staying safe, well, not fun exactly but you see what we mean. With a gimmick like this people will pay more attention and with Japan’s likelihood of suffering further ecological disaster, that’s always a good thing.

The Special Agency NERV Disaster Prevention App launched for iOS on September 1 and will come to Android at an unannounced later date.