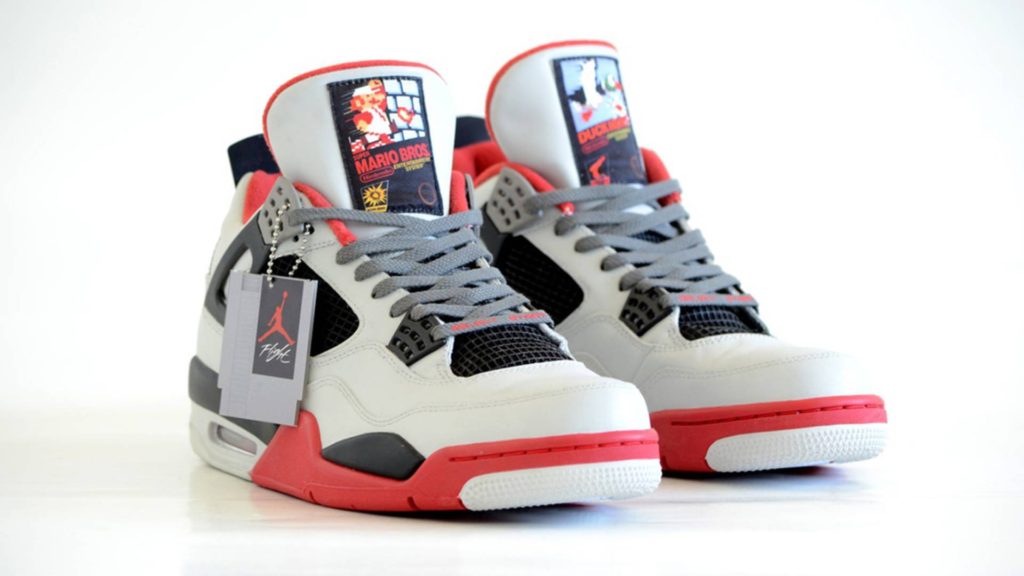 When it comes to retro gaming-inspired custom sneakers, nobody does it better than the team at FreakerSNEAKS. They made headlines a while back for their ridiculously gorgeous limited-edition custom Super Nintendo Jordan IV’s that made waves for their seamless emulation of the classic Super Nintendo look. Shortly after they plucked at the strings of nostalgia once again with the Air Jordan IV SNES US, featuring a colorway easily identifiable to US fans of the SNES with it’s greys and purples. Back once again, we’re taken back even further in time with the 10-piece limited edition release of the Jordan “NES” IV, quite possibly the best looking customs of the whole series so far.

Giving particular homage to both Super Mario Bros. and Duck Hunt on the tongues of each sneaker, we’re presented with a striking off-white, grey, red and black color scheme that is unmistakable at first glance. On the back of each sneaker you’ll find real, pressable buttons from an actual NES controller placed on there, with a Jumpman-adorned NES cartridge tag hanging off the side. Though, I’m sure a certain other jumping man could have worked just as well there.

Custom sneakers like these don’t often come cheap, and that’s going to be your biggest catch in this situation. Limited to a total of 10 pieces, you’ll be looking at forking over some $1,250 USD for the opportunity to put these sneakers on your feet. Because of that, chances are you’ll never see these hitting the streets of Harajuku, but who knows — sneakers like these certainly belong in a museum somewhere. If you’re interested in checking out the official site for the sneakers, you’ll find it here.