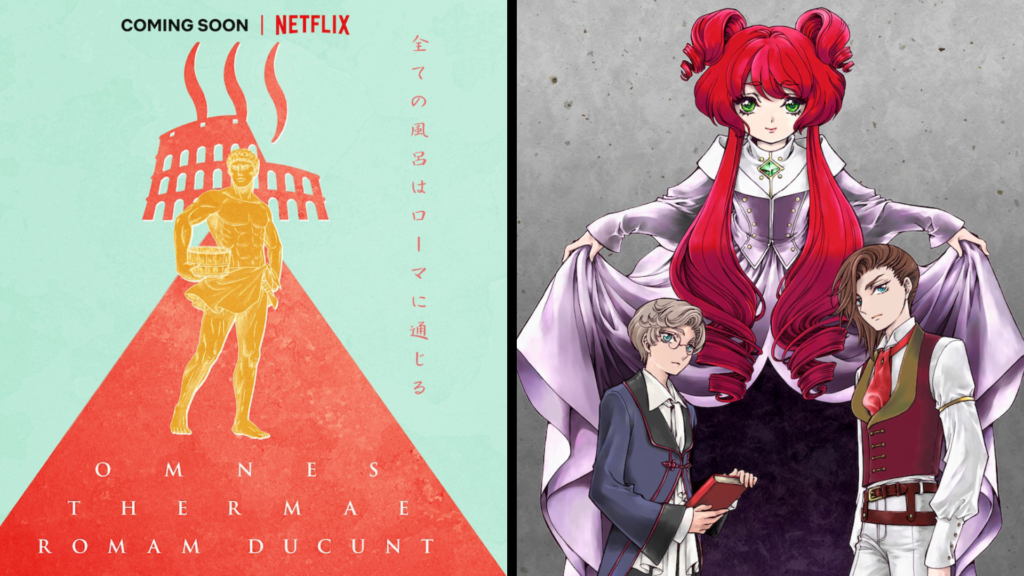 With Annecy Film Festival now well underway, Netflix has taken the opportunity to host a few panels throughout the week discussing the streaming service’s wide array of upcoming animation content. With separate panels discussing their child-focused and adult programming, Tuesday morning brought with it their Annecy anime panel, discussing several new announcements in the world of anime and Netflix.

They kicked off the program with the claim that the company would be releasing 40 anime throughout 2021 and reaffirming their relationships with the likes of Production I.G, BONES and more, including Korean studios. Netflix has a reason to go all out with an anime-focused panel at Annecy Film Festival: as the company started at the start of their showcase, anime has been an area of growth for the company and appeared in the top 10 in over 100 countries around the world. The Seven Deadly Sins, meanwhile, was top 10 in over 70 countries.

One of the anime showcased during the event was Super Crooks, a new anime from Studio BONES coming to the service later this year.

Director Motonobu Hori noted their inspiration for taking on the project was that they were a fan of the creator Mark Miller’s original works, including Super Crooks and another known as King’s Man. Speaking in a discussion with producer Rui Kyo, he admitted that ‘this is my first time directing alone, so I feel very lucky to be able to direct Mark’s project. I also felt this is a project I can really utilize what I have been doing.’ 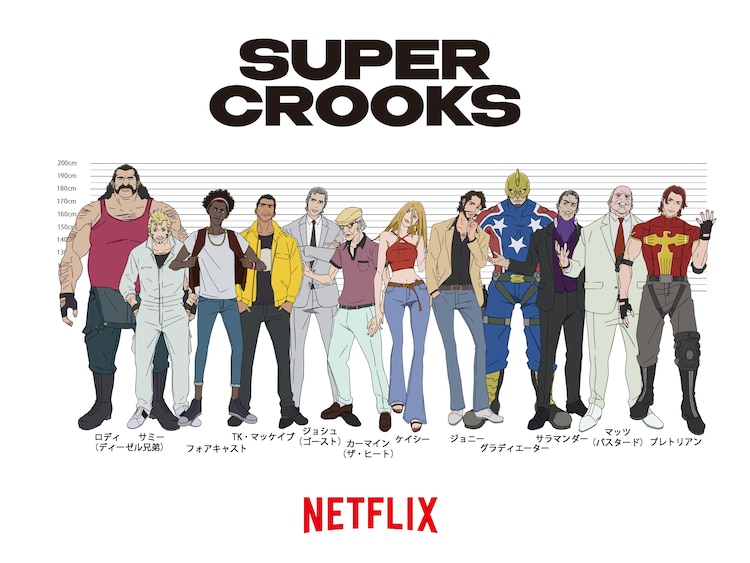 Super Crooks centers on a group of anti-heroes spearheaded by a man known as Johnny Bolt. Their actions result in the villains owing $12 million to the Mob and many times more than this in interest, leading them to decide to plan a major heist in Spain to earn the money.

The series is very modern in terms of its setting and story, which also helps it stand out among others with a similar concept. Another interesting appeal is its criminal anti-hero main character. Unlike other stories with these types of protagonists where their crime is balanced by the character’s sense of principles, our main character is far less serious, making it unclear whether he even has morals to adhere to. The heroine of the series, Casey, is in love with Johnny, the anti-hero protagonist, and their relationship was also a major appeal for the director.

Adapting Mark Miller’s comic into a 13-episode full-length TV series has its problems: Super Crooks is just a single book. According to Hori, the most important thing as a director is to revive the original taste in anime form. This book is about 3 and a half episodes of the 13 episodes being produced, leaving a lot of open space for brand-new stories and worldbuilding not found in the original that needs to adhere to the original’s style of storytelling and animation. These new story moments were written by the creator, Mark Miller.

Initial character designs were created by Leinil Yu and ape the style of the original comic. To assist in this, the team went to San Francisco before the pandemic to discuss these designs, showcasing that this series has been in the works for a while. One of the main desires from here was to create an easy-to-animate and appealing art style that emphasized Johnny’s coolness and Casey’s cuteness. These designs were adapted by Takashi Mitani.

Closing off the discussion on Super Crooks, Hori stated, ‘A part of me is a big fan of anime, but I also love arty stuff a lot. To manage this balance is my lifelong theme and there aren’t many that many that can satisfy both but I really wanted to make one. I felt this work was something I could do to challenge that. We are trying very hard, and I think it’ll come out rather nicely.’

The Annecy Film Festival panel from Netflix moved to discuss the partnerships the streaming service has formed with various creators, in particular CLAMP. Netflix will be working with CLAMP to produce an original anime project based on the Grimm’s fairytales with designs by the collective and a script produced by Michiko Yotei. 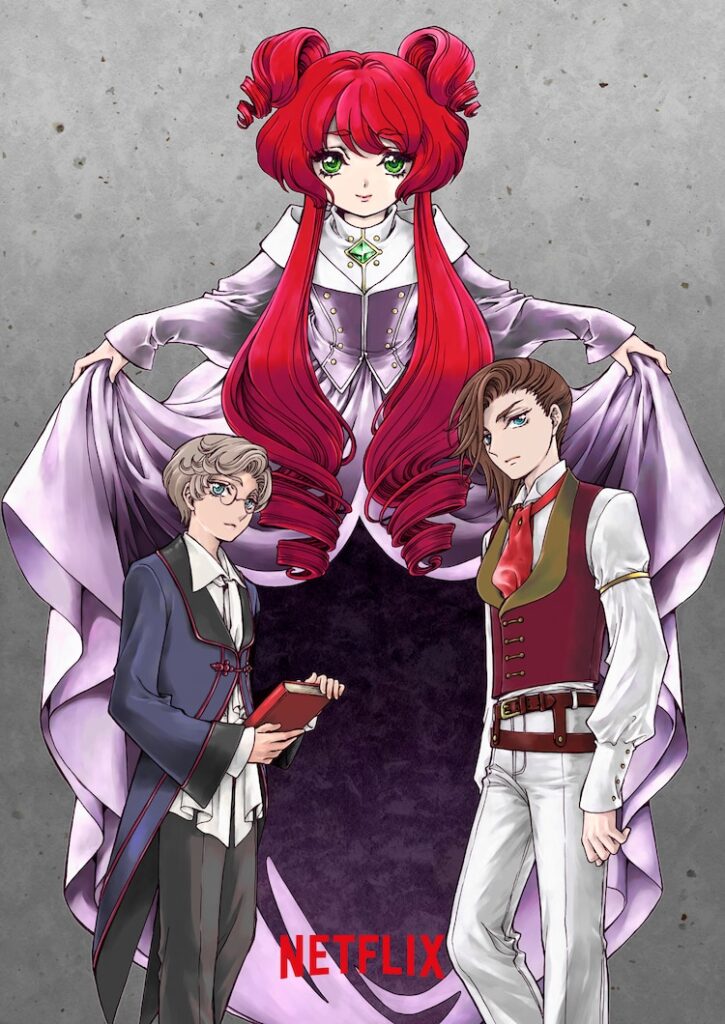 A first look at the character designs produced for the series was showcased for this modern twist on the classic tales with a mix of horror and suspense. The series is being animated by WIT Studio, known for their works on the likes of Attack of Titan and Netflix’s own Great Pretender. ‘For all of us at CLAMP, it is truly an honor to be designing the characters for this exciting, new interpretation of the world-famous fairytales, and as anime fans ourselves, we cannot wait to see this story unfold.

Closing the Netflix Annecy anime showcase was a discussion about the upcoming Thermae Romae Novae with creator Mari Yamazaki. This new anime adaptation will feature new storylines wrote specifically for this new adaptation.

When initially contacted by Netflix for the project, Yamazaki was grateful for the opportunity to once again bring it to the screen. ‘I thought, Oh Netflix. Of course, they’re a pioneer in the field, I was very interested and the first thing I thought was the possibility of distributing this work in various countries. If it’s a comic, it is limited to the publishing country, but once it becomes an anime, it can be easily shared all over the world.’

But why adapt the series again? ‘Thermae Romae was already made into a live-action film and a Flash anime was made as well. But I always felt that I wanted to see more elaborate animation,’ admitted Yamazaki. ‘At the same time, I thought I wouldn’t get the chance for that, so when I got the opportunity, I’m the one who really wants to see what it is going to be like.’

This new anime adaptation has the addition of the word Novae (new) to the end of the title, but this is still an adaptation of the original work. This was because of ideas being added to this anime that were conceived during the manga’s production that there was no time to produce, allowing for a more complete vision for the first time. Of these, two new ideas feature in the series, and while details remain tight-lipped, one will be a prequel.

With animation by NAZ, Thermae Romae Novae will release on Netflix later this year.