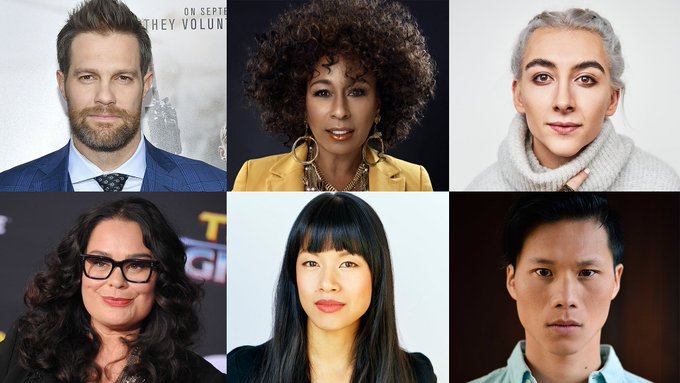 The names were revealed on Thursday. They are:

Anime purists will probably notice that at least one of these characters is new to the live-action series, and the rest will play slightly different roles than their animated counterparts.

No, he’s not the superintendent from The Simpsons. In Variety and other reports, he’s described as a ‘Western lawman,’ who was also Jet Black’s former co-detective from his days at the ISSP’s Homicide Division. He’s also dating Jet’s ex-wife (Jet was married?).

The only ‘Western lawman’ I can think of from the original series is Cowboy Andy, the bounty hunter who dressed like an over-the-top, old-fashioned cowboy. During the series, we met a couple of Jet Black’s old ISSP buddies. Bob was one; Donnelly was another. Both provided Jet with information on bounties. On the other hand, Jet’s former partner Fad turned out to be working for a crime syndicate. Chalmers may be a composite character.

Ana could be a reference to Annie, a.k.a. Anastasia, although the character is different enough to be a coincidence. The live-action Ana will be the owner of ‘the hottest underground bluesy jazz club on Mars,’ according to reports. Ana is also apparently a ‘surrogate mom’ to Spike. She’s described as ‘cool and intense.’

Introducing Cowboy Bebop's Gren @MasonAPark 🚀 Revolutionary as the original anime was, the vocabulary we have today for LGBTQ+ people didn't quite exist when it aired. For the upcoming live action adaptation, the character is being reimagined as nonbinary with a nonbinary actor. pic.twitter.com/D6E4qC2Sgj

Ana’s ‘right-hand person,’ Gren, also has an animated namesake. The animated Gren was a war veteran who was stationed with Vicious during the war. After the war, Gren was imprisoned as a spy, escaped, and ended up hiding out on Callisto. Gren’s story is told in the two-part episode ‘Jupiter Jazz’.

In July, it was reported that Gren would have a larger role in the Netflix series. The live-action character was described as ‘nonbinary, genderqueer, intersex, transmasculine, and/ or third gender,’ which seems to correlate with the animated version having breasts. The live-action Gren will be ‘as capable with their wit as a glock.’

Park was Hedwig in the first Broadway national tour of Hedwig and the Angry Inch.

Mao sounds like a younger, gender swapped version of Mao Yenrai. Both versions are a crime syndicate ‘Capo,’ or Caporegime (a crime boss, but below the Don). Interestingly, Mao leads the White Tigers in the live-action version, instead of the Red Dragons. Live-action Mao is described as ‘more cunning, adept, crafty, and deadly than her counterparts.’ The animated Mao is murdered by Vicious after signing a truce.

House was in Moana (voice actress), Thor: Ragnarok, and Netflix’s The New Legends of Monkey.

Finally, we have Shin and Lin, Vicious’s henchmen. These twins are fearful of, but loyal to their boss.  Both Shin and Lin have animated counterparts. Both are Red Dragons, although their relationship to Vicious is different. They’re also not twins.

Truong was in Strike Back, and Hard Target 2. Xuande was in Hungry Ghosts.