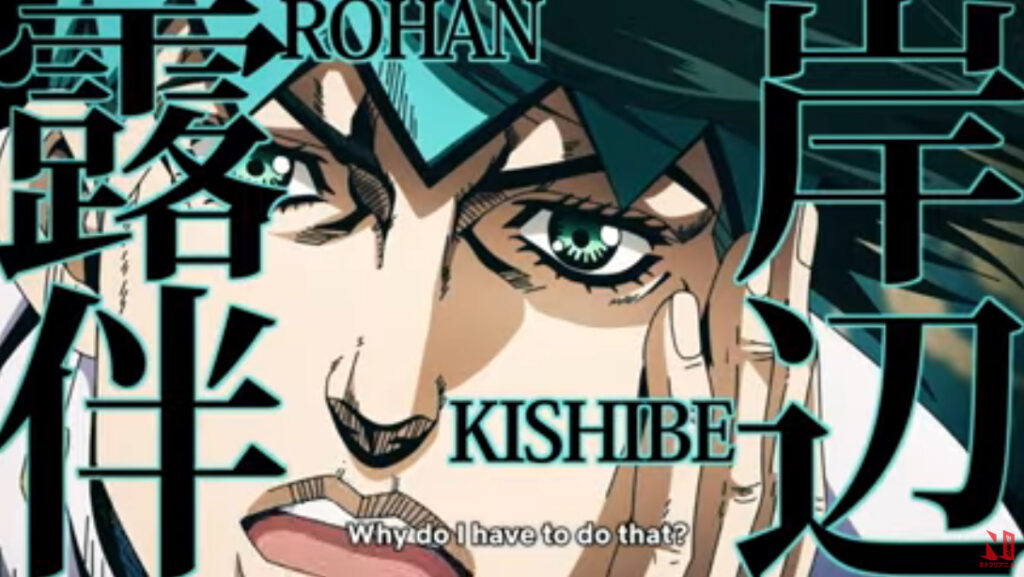 On Friday, the streaming media company posted a trailer for the OVA on YouTube.

As you can tell just from the art style, this OVA is based on a spin-off manga of Hirohiko Araki’s JoJo’s Bizarre Adventure franchise: specifically, the 1992 manga/ 2016 anime series Diamond Is Unbreakable.

The series features the traveling manga artist Rohan Kishibe. In the manga, Rohan seeks inspiration from the real-life experiences he encounters in his travels. Naturally, because this is a JoJo spin-off, these experiences are typically unusual, weird, and supernatural. All of these stories are one-shot episodes, with the egotistical Rohan being the connection between all of them.

Takahiro Sakurai (Osomatsu Matsuno from Osomatsu-san; Sasori in Naruto: Shippuden; Giyu in Demon Slayer: Kimetsu no Yaiba; and many others) plays Rohan.

The OVA contains four of the stories from the manga: Episode 5: Millionaire Village; Episode 2: Mutsu-kabe Hill (Mutsukabezaka); Episode 16: At A Confessional; and Episode 9, The Run. Yes, the numbering is out-of-order.

Episode 5 was bundled with other JoJo DVD or Blu-ray purchases in 2017. Episode 2 was released in 2018. The final two were released to limited movie theaters in December 2019 before going out to DVD and Blu-ray in March 2020. Netflix will be the first to give the OVA a major streaming release.

Netflix has already created a webpage for the series, although there’s nothing to see there yet.

Note that this is separate from the live-action TV drama which ran on NHK in December 2020. So far, Netflix hasn’t picked up the live-action version; although if the Thus Spoke Kishibe Rohan anime mini-series does well enough, it is certainly possible that they will add it.