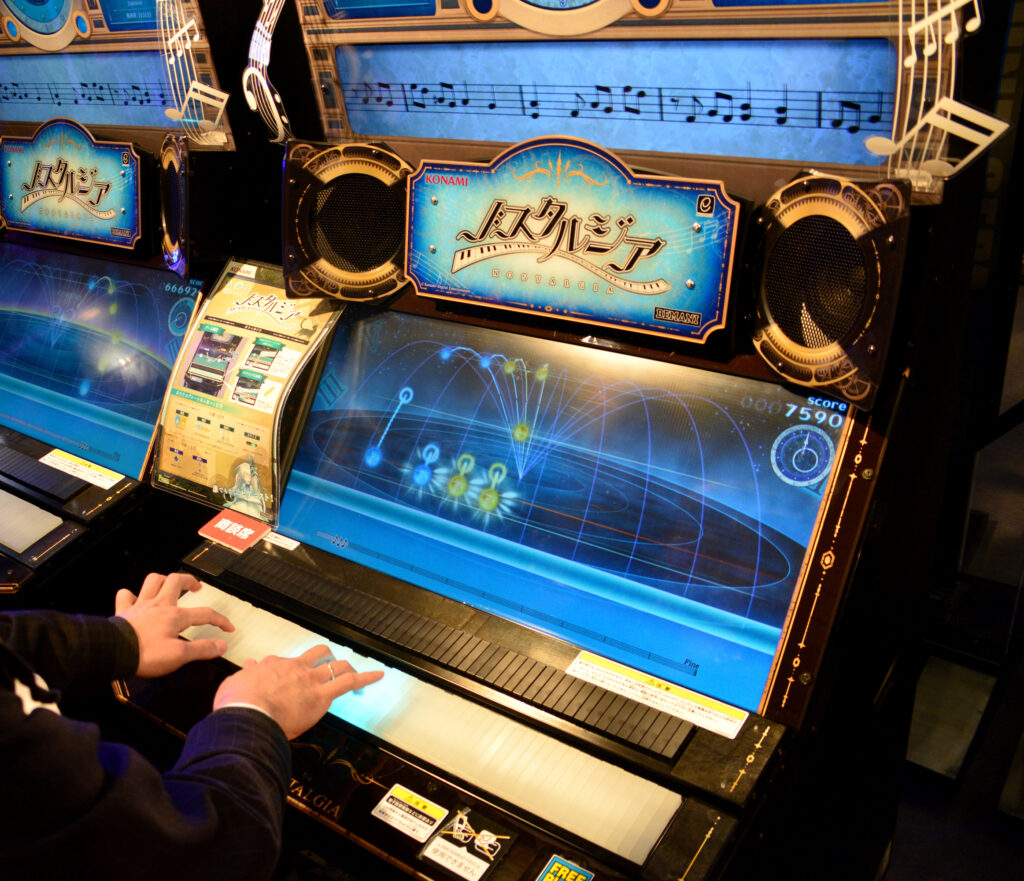 At JAEPO this past weekend, KONAMI debuted a very early version of their new piano-style BEMANI game, Nostalgia (ノスタルジア)! A teaser site was posted last week, although there is no information other than the following image: We got a chance to try it at this year’s JAEPO! The song list was as follows:

The BEMANI songs are all new piano versions. Scorpion Fire is pretty difficult, but I managed to clear it as my very first song. The game’s difficulty is very forgiving.

Songs are selected from the screen above by touching them. So how does gameplay work? Take a look at the image below. Notes will scroll down with different colors. When they enter the teal zone near the bottom of the screen, you press the corresponding key on the keyboard. The idea is to use your left hand for blue notes and your right hand for yellow notes. There are also darker notes that you use the black keys to hit.

The key placement and orientation take some getting used to, and to be honest, I’d much rather see a standard-style keyboard here. However, the reason for this is so that you can make mistakes. If you press any 4 surrounding keys from the key you were “supposed to” hit, it will not count against you. It also makes it easier to hit the slide/chain notes.

In general, the piano keys have a nice feel to them, but realistically, they will be a nightmare for arcade operators unless maintenance is a top priority for the development team.

The cabinet on display was based on the BeatStream cabinet, but heavily modified. Konami staff at the event mentioned that this would not be the final design, and upgrade kits are not planned for BeatStream.

Here’s a short gameplay video to demonstrate how it all works:

The cabinet and theme design have a nice feel. For instance, this clock is actually a score graph, filling up according to your accuracy: While the game is very early in the development stage, I enjoy my time with it, and I’m looking forward to the next revision!

‘Anyone can feel like a pianist! A new music game based on the ever-popular piano.’

Enjoyable for beginners and the more experienced! The piano-style control system.
Nostalgia’s keyboard is designed to be like a smoother, more velvety version of a real piano. If you press the keys at a point which more of fits the chart, the correct sound will be heard, so even people who can’t play the piano can easily enjoy performing.

‘Featuring many songs you’ve heard somewhere before’
Beginning with famous classical works, the game will also feature piano arrangements of Bemani songs as well as many original works.

So? Between this and Otoiroha, which new game are you most looking forward to?