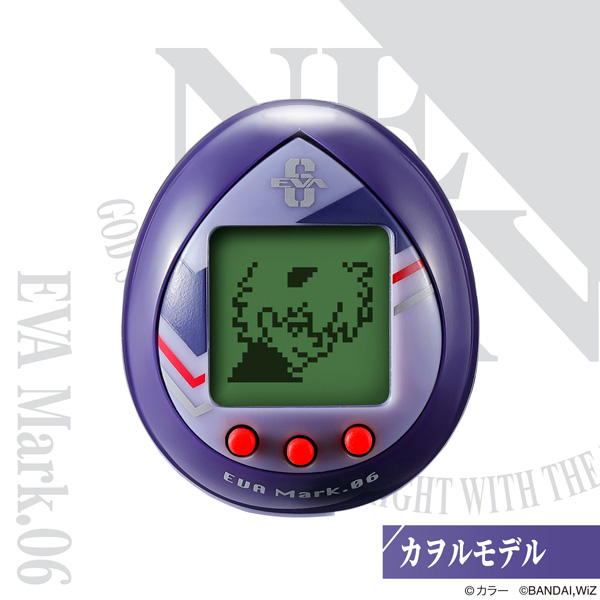 A few months back, we reported on the new Evangelion themed Tamagotchi toys being released from Bandai Toys. It seems they did pretty well because Bandai Toys announced today that they are going to be adding three new Evatchi models to the line-up. Needless to say, they’re awesome and I want them all.

For those of you who are unfamiliar with the Tamagotchi line of toys, they are a handheld digital pet that took the public by storm in the latter half of the 90s. You would start out with an egg, and depending on how you answered to its needs, it would grow to be a different type of character. You needed to play with your pet, feed it, and clean up after it. Just as you would with a real one.

The new series of Evatchi are going to be essentially the same as the previous three models that were released earlier in the year, but designed after three different characters. These characters are Kaworu, Mari, and Mirei Ayana. Each device comes with each own color pattern: Kaworu’s Grey Purple, Mari’s Pink, and Mirei’s Black. They are definitely something you’re going to want to cop if you’re looking to complete the collection.

The new series of Evatchi are going to be released in January 2021. They carry a price tag of ¥2,530 each. The initial series was pretty difficult to get in stores, but they were readily available from third-party markets such as Yahoo Auctions and Mercari (for a reasonable price). This goes to say that if you’re looking to get them directly, you’re going to have to move pretty quickly as they’re likely to sell out soon.