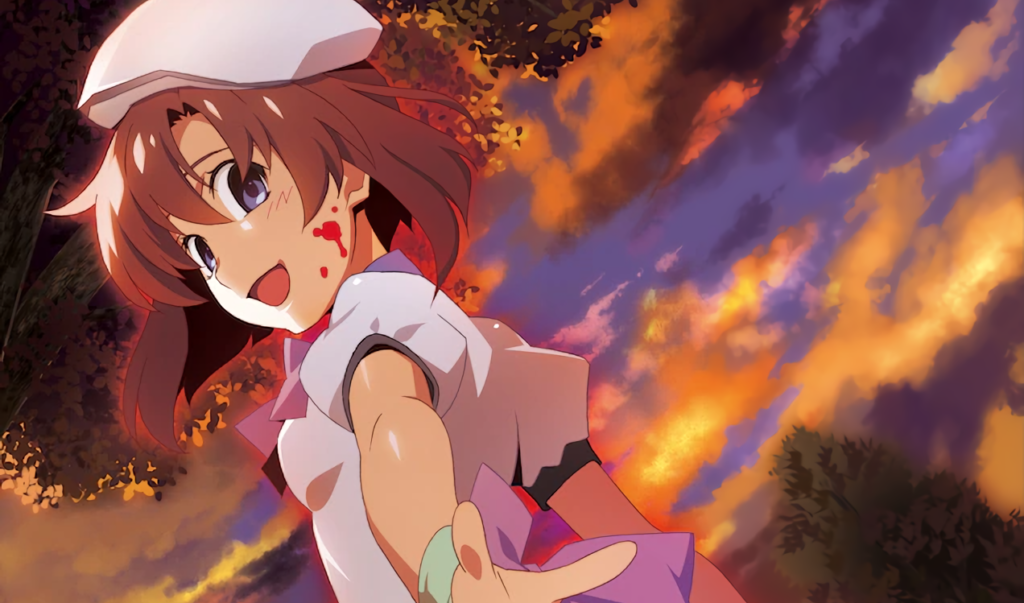 To almost everyone’s surprise, there’s a new Higurashi anime on the way. Studio Passione will be handling the project alongside character designer Akio Watanabe, who previously worked on the Monogatari franchise. While it is true that the image that formed the basis of the new series’ teaser trailer was actually already unveiled at the end of an all-night Higurashi anime marathon back in June, that image alone wasn’t enough to make true the many fans’ seemingly impossible, long-held dream of a new anime project. But, here we are.

Even so, with 50 episodes worth of TV anime and more than a handful of OVAs, ONAs, and even live-action movies under the series’ belt, what on earth could this new anime project be? Will it seek to retell the story of the original anime by Studio DEEN that so keenly defined otaku culture in the 2000s? Or could it be something more, treading new ground and filling in the gaps of that pre-eminent adaptation? Let’s find out.

The Many Fragments of the Higurashi Universe

If you got off the Higurashi train in the late 2000s when the second season of Studio DEEN’s anime adaptation, titled Higurashi no Naku Koro ni Kai, finished its broadcast and spilled all the beans as to the series’ overall mystery, chances are that you don’t know about the ever-expanding pool of Higurashi content that the new Higurashi anime could draw from and adapt.

Although he released the ‘final’ chapter of Higurashi’s ‘Answer Arc’ – a set of four episodes designed to answer the ‘questions’ posed by the previous four episodes in the ‘Question Arc’ – in the form of Matsuribayashi all the way back in 2006, Ryukishi07 and his production company 07thExpansion have hardly stopped with new Higurashi side stories and arcs since then. In fact, almost every year there’s been some sort of new addition to the universe that widens the pool of content further and further.

Part of this comes down to the numerous different collections that currently exist out there in the wild, all of which seem to necessitate some sort of new story or arc in order to sell. As a result, by my calculations, only about half of the Higurashi material currently out there has been adapted, as of this moment, into anime format. 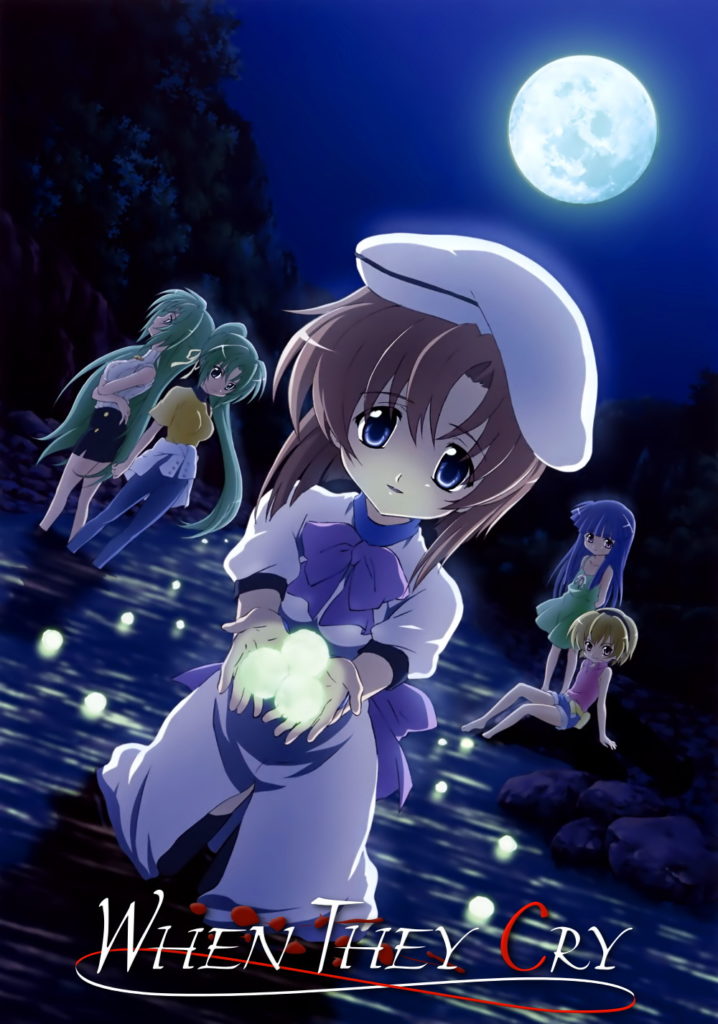 For a new Higurashi anime to draw on this ever-expanding pool of content wouldn’t be unthinkable. It’s only been 14 years since the first Higurashi anime debuted in 2006, and there are surely many fans of the series who have stuck around since then. Seeing the same story repeated again might be a tad boring, especially if they already dove into the games after watching the anime.

Nevertheless, the quality of this wider pool of Higurashi content is disputed, to say the least. So many of the extra arcs and special chapters made for the various game collections make no effort to disguise their blatantly exploitative aims, delivering only the thinnest of plotlines to go along with plenty of fanservice.

While it is true that some of these arcs have been adapted into anime format, such as the Hajisarashi and Batsukoishi arcs that formed the basis of parts of the Higurashi no Naku Koro ni Rei and Kira OVAs respectively, that was during the peak of the series’ popularity and, thankfully, the hardcore otaku crowd has since moved on to other things. It seems, therefore, unlikely that Passione would make the decision to adapt much of the leftover content.

Even so, if the new Higurashi anime was to draw on any of the leftover content, then it’d probably be any one of the four arcs that were written for the Kizuna Nintendo DS collections – all four of them focus on different side characters and fill in some of the blanks left by the main Higurashi story. That’d certainly make more sense from a business and respectability point of view.

As a result, the prospect that this new anime might make an effort to retell and readapt the story of Higurashi, ignoring the original anime series all together, seems much more plausible. This is fine, as there’s certainly reason enough to do so.

The original Higurashi anime by Studio DEEN is very flawed in many aspects. Aside from the dated visuals, there’s particular problems in the way that it adapts the story from the original sound novels. The first season, in particular, attempts to squeeze in a whopping six arcs worth of content into 26 episodes, and to do this the studio had no choice but to cut, compress, and compromise – making for an anime that is bereft of the same level of detail and character development that can be found in the source material.

Of course, DEEN’s treatment of the source material couldn’t have been that bad. If that was the case, then why is the series so popular? This is because while the anime, at least the first season, is lacking in detail and doesn’t match the same level of character development as the original, it more than makes up for this in terms of style, atmosphere, and pure thrills. There’s a reason why the series has gone down as a horror classic.

Nevertheless, this does go against the appeal of the original sound novels, which always focused more on mystery and characters than horror and gore. My hope is that a new Higurashi anime might reorientate back towards this original appeal, telling the story anew in a way that is more faithful to Ryukishi’s original vision.

In this sense, it’d resemble the second season of Studio DEEN’s anime, which did focus more on storytelling and explaining the mystery behind the horrific events of the first season. But it’d sure be nice to have an adaptation that was faithful from the very beginning – would that be too much to ask?

Studio Passione and the Challenges of a New Higurashi Anime

In this sense, the new Higurashi anime has an exciting opportunity: create a more faithful adaptation that is sure to excite fans both new and old. This won’t be easy for Studio Passione, of course, given the dense nature of Ryukishi07’s storytelling style. But they do, quite helpfully, have the lessons from the past to draw from in order to help them in this task, alongside famed character designer Akio Watanabe, who will be updating the series’ visual style for a new age.

Nevertheless, it is unlikely that a passion to right the wrongs of the past is what prompted this new anime project to get off the ground. Studio Passione isn’t, after all, a studio renowned for passion projects (despite their name), tending instead to pick up gigs when and where it can. These include such anime as the fourth season of High School DxD (previously animated by TNK) and the second season of BanG Dream! (in collaboration with SANZIGEN, previously by Xebec).

Rather, what got this project off the ground was undoubtedly the new wave of excitement for the works of 07thExpansion as a whole, including but not limited to Higurashi. This has been evident not just in Japan, where the new Higurashi collection Hou (lit: Gratitude) proved popular enough to get a Nintendo Switch release, but also in the west, where MangaGamer have been slowly translating the original Higurashi sound novels, and someone even had the hair-brained idea to dub the whole of Umineko into English.

Part of the studio’s resurgence in the west is down to availability: it’s now possible to buy (most of) Higurashi and Umineko (including the fighting game) in English on Steam, which would’ve been a farfetched dream back in the late 2000s. But there’s also the issue of nostalgia, as old fans become adults and look back fondly at the series and the impact it has had on their lives. I know this is what happened to me – my days on DeviantArt as a kid certainly wouldn’t have been the same without Higurashi OCs, fanart, and memes. 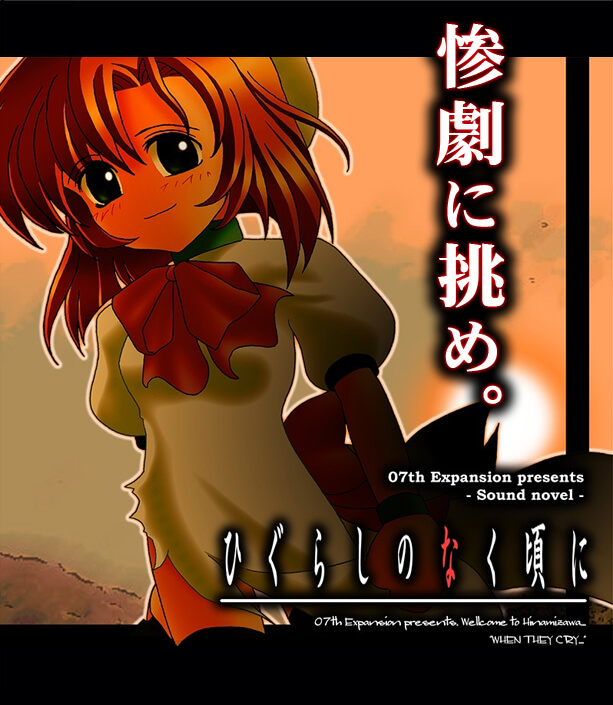 Nevertheless, one thing is clear: consumers are hungry for more Higurashi and 07thExpansion content. And while the challenges facing Studio Passione and Akio Watanabe are many, here’s hoping that their new Higurashi anime manages to match expectations.

Keep an eye on the official website and Twitter account for more information on the new Higurashi anime project as it comes. In the meantime, you can check out our review of the first ‘phase’ of 07thExpansion’s latest series, Ciconia When They Cry.