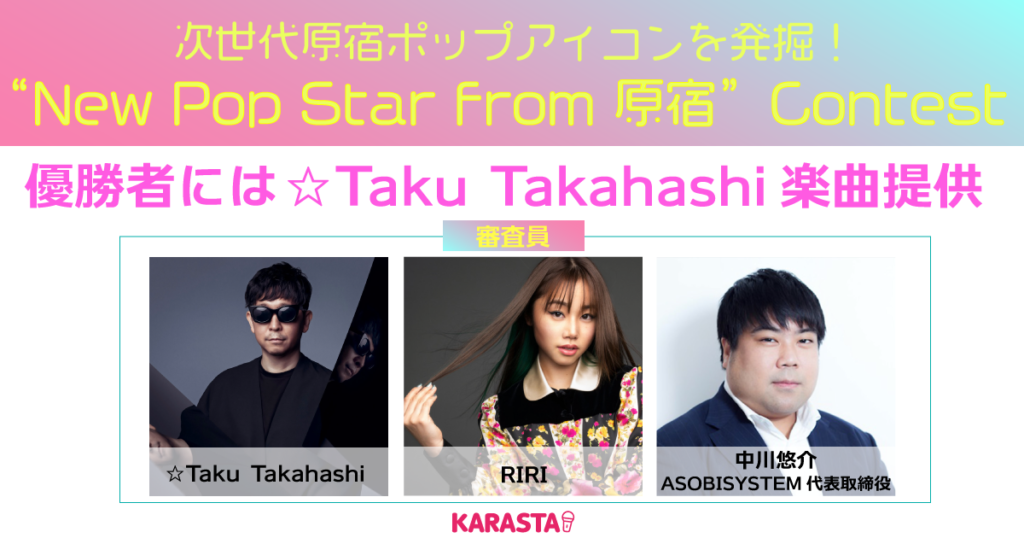 If you ask most people outside of Japan to define a specific area of Tokyo that drives their cultural impression of the country the answer you’ll get is likely to be Harajuku. It’s an area that’s always thrived thanks to a strong connection to fashion, music, art, and is the birthplace of many highly regarded Japanese exports from throughout the years. All of that considered it makes sense that Harajuku would be at the heart of a competition focused on finding the next big pop star, one that’s making use of technology and tapping into respected members of the music industry to find its winner.

Today KARASTA, a karaoke and streaming application created and based in Japan, announced the competition to be judged by iconic producer ☆Taku Takahashi (m-flo, block.fm, OTAQUEST), singer and Forbes 30-under-30 nominee RIRI, and ASOBISYSTEM founder/president Yusuke Nakagawa. Not that there is any reason to question the validity of those involved, but tapping into an artist like ☆Taku who has topped the charts with his own works and made hits for countless artists in his career, a celebrated young R&B star in RIRI, and the man behind Harajuku’s most celebrated entertainment agency in Mr. Nakagawa and the end result is sure to be a hit.

On 3 May, 2021 KARASTA invites all aspiring singers to take to the app and upload a video of them singing to join the competition. There are different categories in which you can participate, all focused on the image of POP. Four entries from each category will move on from the first round to participate in a live streaming performance for their second round, in which the judges will select 5 finalists based on the audience reaction. The final round will take place at a yet-to-be-announced venue with the winner scoring the grand prize of recording a song produced by ☆Taku Takahashi, and support from ASOBISYSTEM and KARASTA management on their music activities!

The contest is open to anyone with a valid KARASTA account linked to Twitter, and permission granted by a guardian in the case of entrants under the age of 18 or their management in regards to anyone belonging to an agency or label already. The first round of the competition will run until May 17th with entrants chosen to advance to be announced on the 19th. For the full list of rules and additional details, check out the official KARASTA competition website.